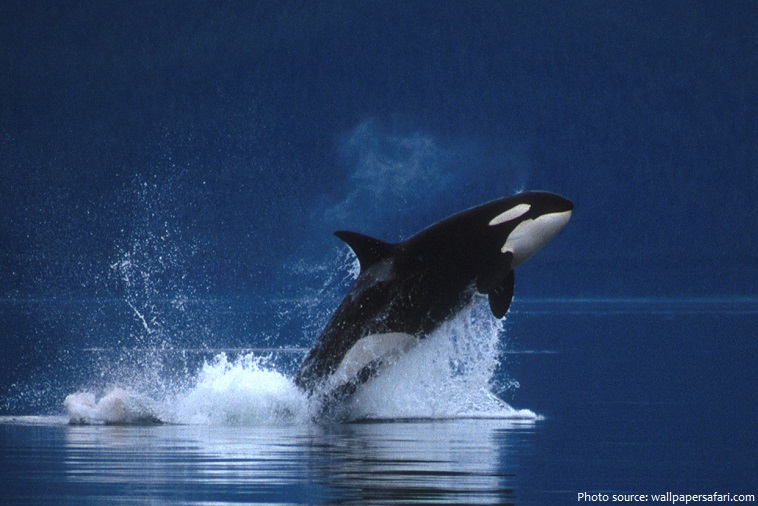 The killer whale or orca (Orcinus orca) is a toothed whale and the member of the dolphin family.

Killer whales most widely distributed marine mammals, found in all parts of the oceans.

They can be found in each of the world’s oceans in a variety of marine environments, from Arctic and Antarctic regions to tropical seas.

The lifespans of wild females average 50 years. An exception is Granny (J2), who was the oldest known orca, estimated to have been 105 years old at the time of her death.

Wild males live around 30 years on average, with a maximum of about 60 years. 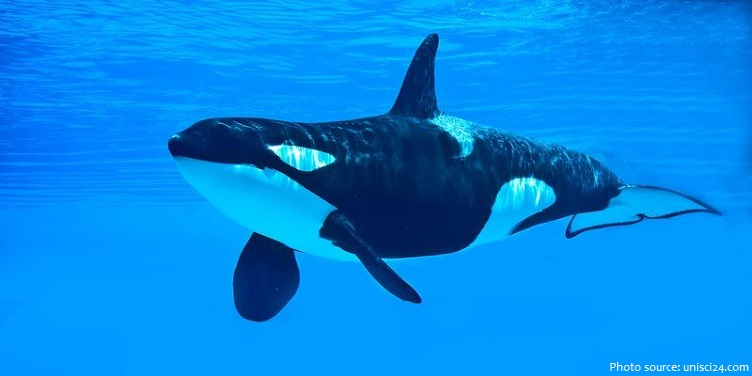 Orcas are immediately recognizable by their distinctive black-and-white coloring. They are black on top with white undersides and white patches near their eyes. They also have highly variable gray or white saddle behind the dorsal fin; these markings are unique across individuals and populations. 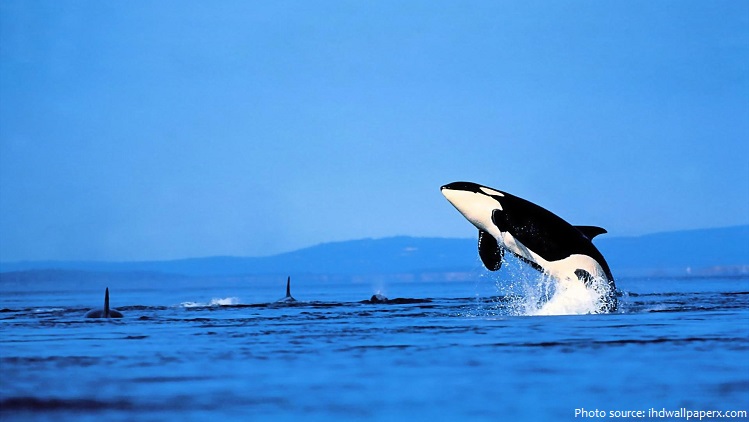 Animals looking down on an orca from above, such as a seal on an ice floe, might not see it because the whale’s dark back blends with the water below.

Each lobe of the two-lobed tail is called a fluke. A large male killer whale may have tail flukes measuring 2.75 meters (9 feet) from tip to tip. 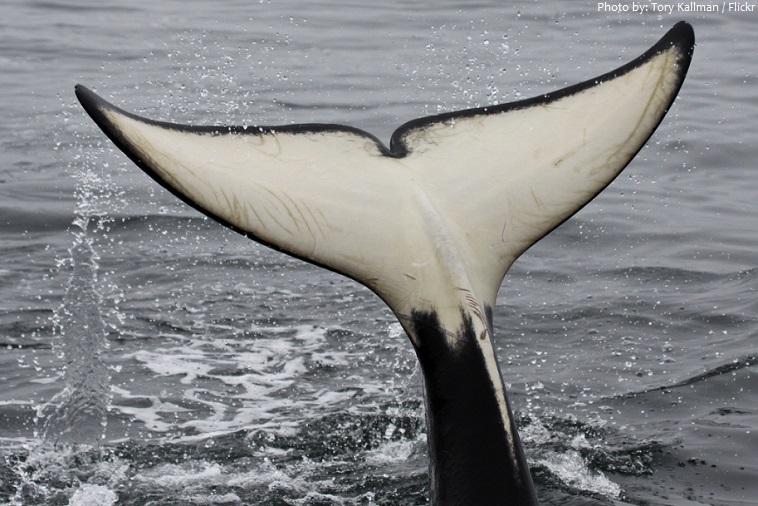 Killer whales have a large dorsal fin up to 1.8 meters (5.9 feet) tall. Like the keel of a boat, the dorsal fin may help stabilize a killer whale as it swims at high speeds, but a fin is not essential to a whale’s balance.

A killer whale’s skin is smooth. The outer layer continually and rapidly renews itself, and the old skin sloughs off. Smooth skin increases swimming efficiency.

Killer whales engage in frequent behaviour at the surface such as breaching (jumping completely out of the water) and tail-slapping. These activities may have a variety of purposes, such as courtship, communication, dislodging parasites, or play. 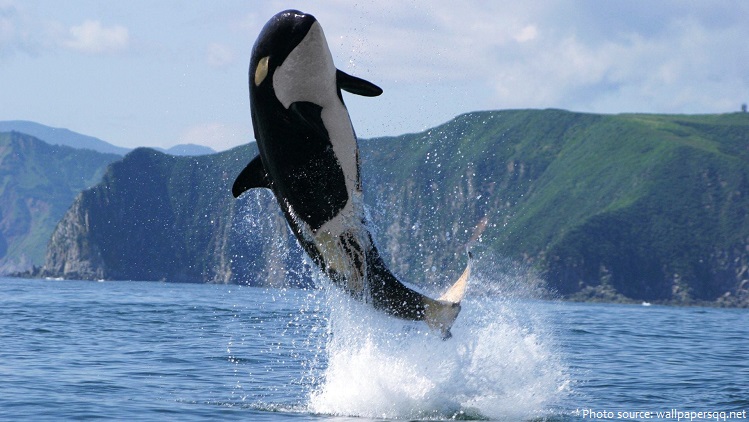 The killer whale’s large size and strength make it among the fastest marine mammals, able to reach speeds in excess of 56 kilometer (35 miles) per hour.

Orcas usually have a diving pattern where they take several shallow dives of less than a minute, followed by a deeper dive where they stay submerged longer. They will generally surface to breathe after 3-5 minutes on these deeper dives, but can hold their breath for up to 15 minutes or more on occasion. 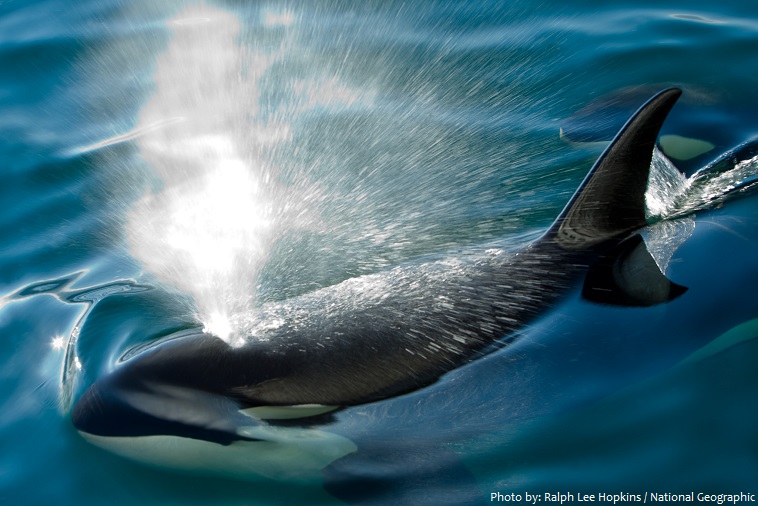 They are able to dive to a depth of 100 meters (330 feet) or more when searching for food, however the deepest known dive for orca performed under experimental conditions was 259 meters (850 feet).

Orcas have to be conscious to breath. This means that they cannot go into a full deep sleep, because then they would suffocate. They have “solved” that by letting one half of their brain sleep at a time. This has been determined by doing EEG studies on dolphins.

Orcas are highly social animals that travel in groups called pods. Pods usually consist of 5 – 30 whales, although some pods may combine to form a group of 100 or more but are usually considered temporary. 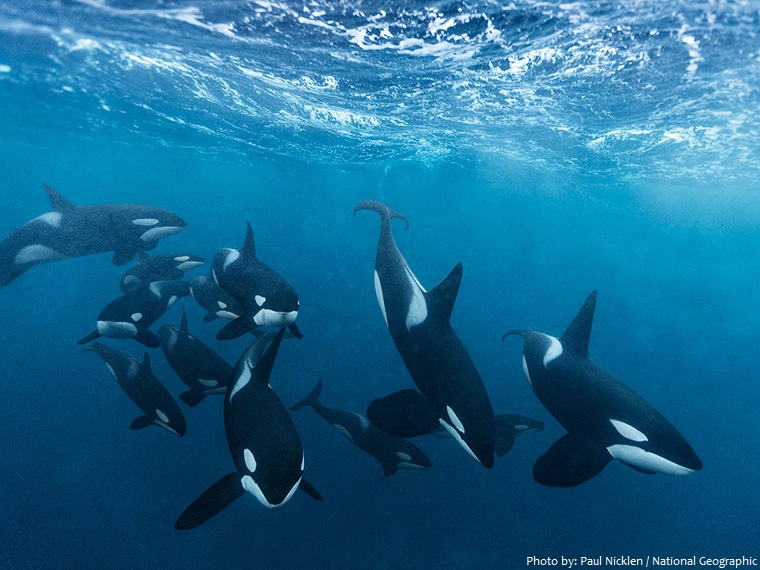 At the social heart is the orca mother. She and her children (the maternal group), even her adult sons, stay together throughout life. Adult daughters who have their own offspring may separate from their mother to some extent in order to take care of their children’s needs, but will usually be found travelling nearby.

Orcas are notable for their complex societies. Only elephants and higher primates, such as humans, live in comparably complex social structures.

Communication lies at the core of orca social awareness. Family members are seldom out of hearing range of one another. Their calls, as loud as a jet plane’s engines, echo over many kilometers/miles in the ocean. Everyone knows where he or she is and where everyone else are. 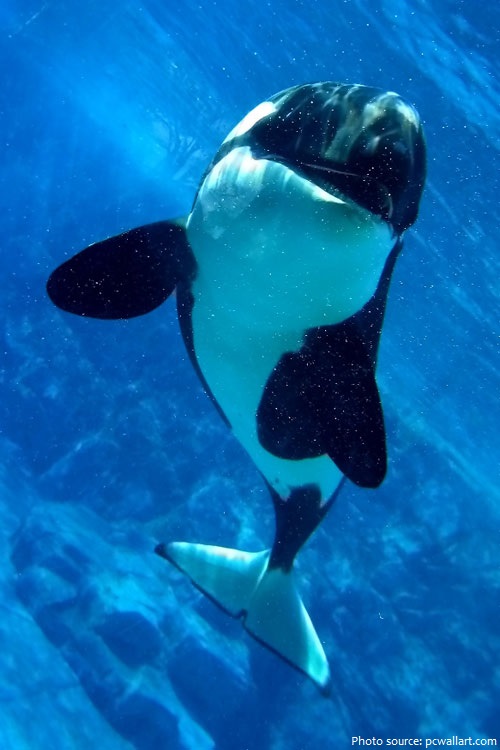 Killer whales depend heavily on underwater sound for orientation, feeding, and communication. They produce three categories of sounds: clicks, whistles, and pulsed calls. Clicks are believed to be used primarily for navigation and discriminating prey and other objects in the surrounding environment, but are also commonly heard during social interactions.

Their sophisticated hunting techniques and vocal behaviours, which are often specific to a particular group and passed across generations, have been described as manifestations of animal culture.

Killer whales have a diverse diet, although individual populations often specialize in particular types of prey. Some feed exclusively on fish, while others hunt marine mammals such as seals, dugongs and dolphins. 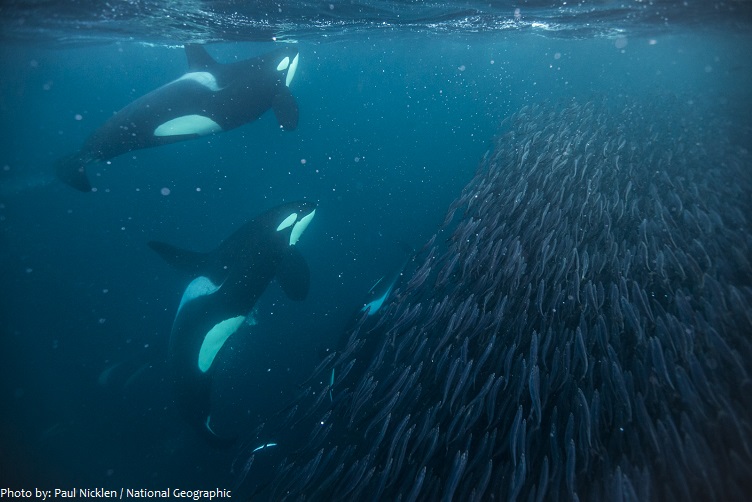 They have been known to attack baleen whale calves, and even adult whales.

Orcas use many different techniques to catch prey. Sometimes they beach themselves to catch seals on land, meaning they jump from the water onto land. They will also slap their tails onto the water’s surface, causing a wave to wash prey, such as penguins or sea lions, off ice floes and into the water. Orcas will also work together to herd fish into a compact area so that they’re easier to eat.

Adult killer whales give birth to a single baby (only once were twins recorded) about every 5 years. They start breeding at about 15 years of age. Gestation varies from 15 to 18 months. Babies nurse for about one year. 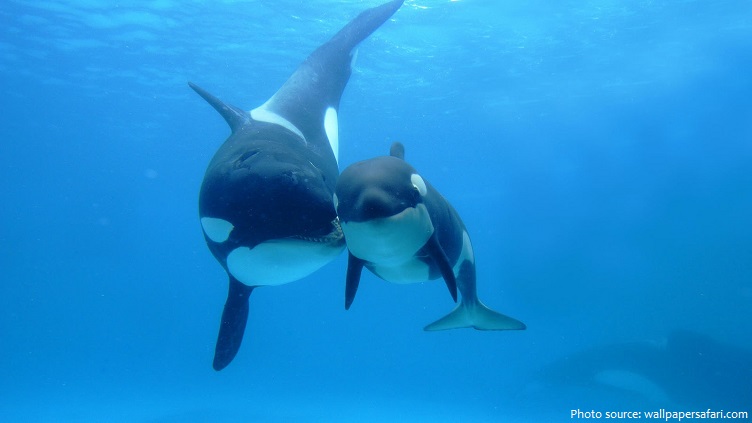 Orcas are apex predators, at the top of the food chain. No other animals hunt orcas. Their only enemy is mankind. Orcas were targeted in commercial whaling during the middle part of the 20th century once stocks of larger species had been depleted.

Although the exact number of killer whales in the oceans is unknown, scientists estimate that the population is at least 50,000 individuals.

Sometimes referred to as wolves of the sea, orcas live and hunt together in cooperative pods, or family groups, much like a pack of wolves.

There is no record of a wild killer whale ever attacking a human.

Killer whales have the second-heaviest brains among animals (after sperm whales, which have the largest brain of any animal).

They can be trained in captivity and are often described as intelligent, although defining and measuring “intelligence” is difficult in a species whose environment and behavioural strategies are very different from those of humans.

Studies have indicated that an orca has an outstanding memory, perhaps even photographic. In tests conducted with Orcas in captivity, they recalled testing patterns up to 25 years after they were initially conducted.

Killer whales are generally considered monotypic (belonging to one species). However, genetic studies and morphological evidence have led many cetacean biologists to now consider the existence of multiple species or subspecies of killer whales worldwide. 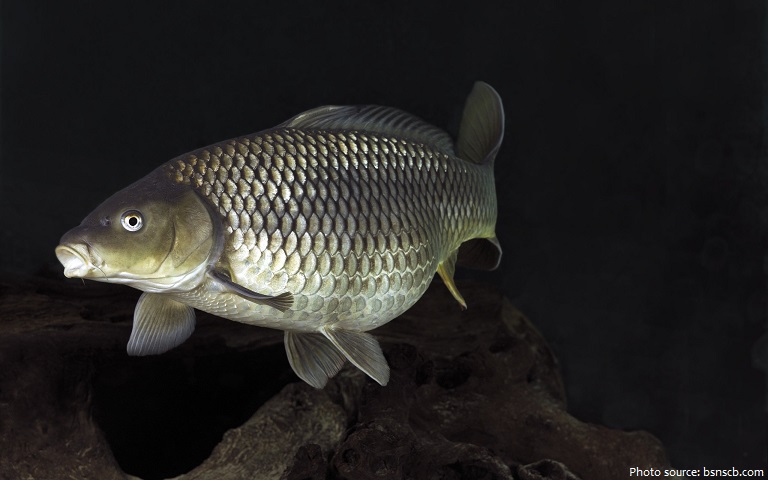 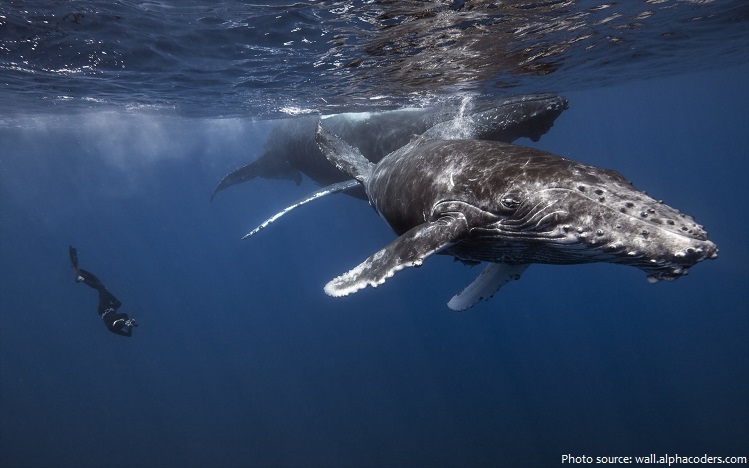 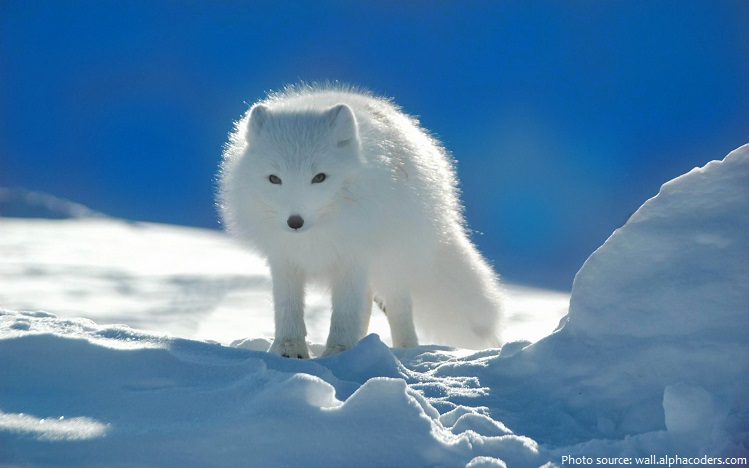 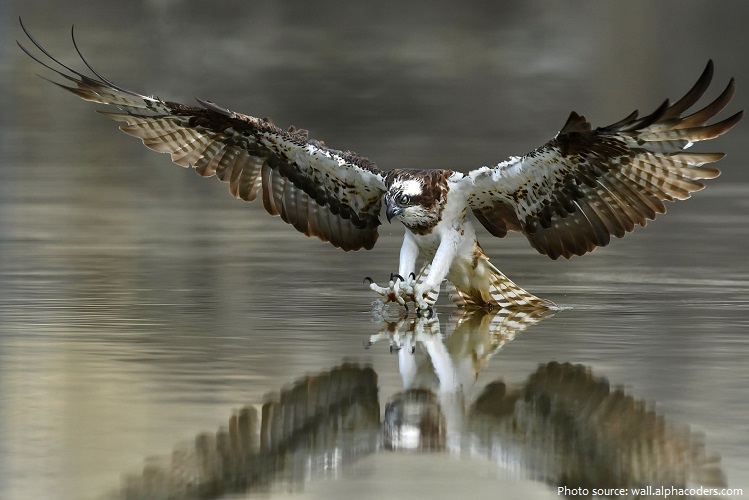 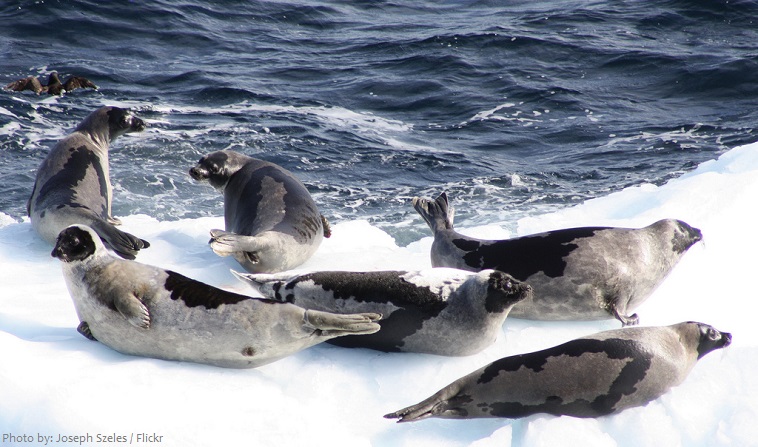 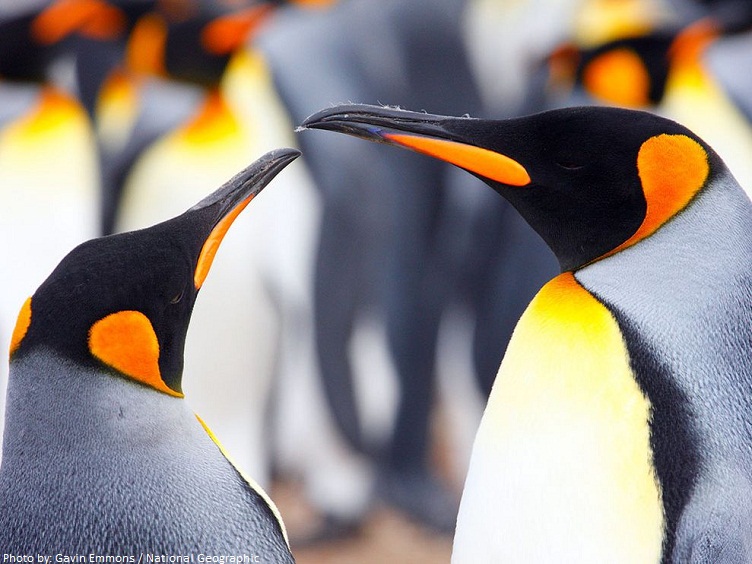