Home
Architecture
Interesting facts about the Metropolitan Museum of Art

The Metropolitan Museum of Art, colloquially “the Met”, is located in New York City and is the largest art museum in the Western Hemisphere, and is among the most visited art museums in the world.

The Metropolitan Museum of Art’s earliest roots date back to 1866 in Paris, France, when a group of Americans agreed to create a “national institution and gallery of art” to bring art and art education to the American people.

The Metropolitan Museum of Art was founded on April 13, 1870. The founders included businessmen and financiers, as well as leading artists and thinkers of the day.

Since the Museum opened its doors to the public in its current location in Central Park in 1880, its footprint has expanded to cover more than two million square feet (185,000 square meters).

A much smaller second location, The Cloisters at Fort Tryon Park in Upper Manhattan, is dedicated to the art, architecture, and gardens of medieval Europe.

On March 18, 2016, the museum opened the Met Breuer museum at Madison Avenue in the Upper East Side; it extends the museum’s modern and contemporary art program.

The Met Fifth Avenue is one of the world’s largest art galleries and presents over 5,000 years of art spanning all cultures and time periods. 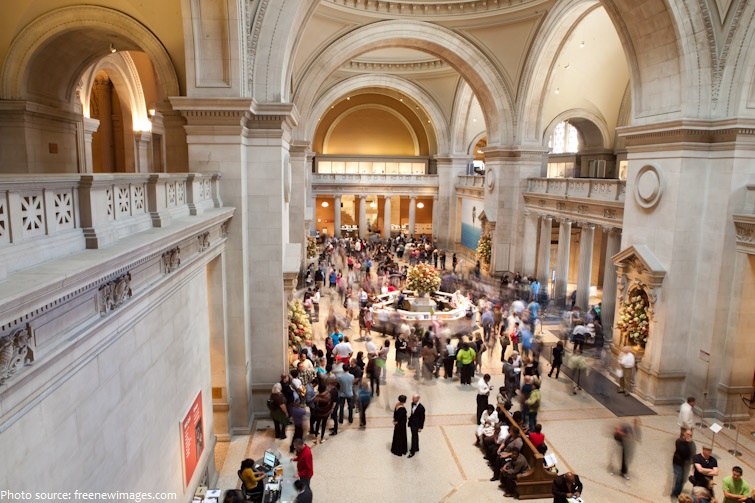 It houses more than 2 million pieces of art in its permanent collection, divided among seventeen
curatorial departments.

The permanent collection consists of works of art from classical antiquity and ancient Egypt, paintings and sculptures from nearly all the European masters, and an extensive collection of American and modern art. The Met maintains extensive holdings of African, Asian, Oceanian, Byzantine, and Islamic art. The museum is also home to encyclopedic collections of musical instruments, costumes and accessories, and antique weapons and armor from around the world.

The ancient Egyptian hippopotamus statuette that is now the Museum’s unofficial mascot, “William,” entered the collection in 1917. 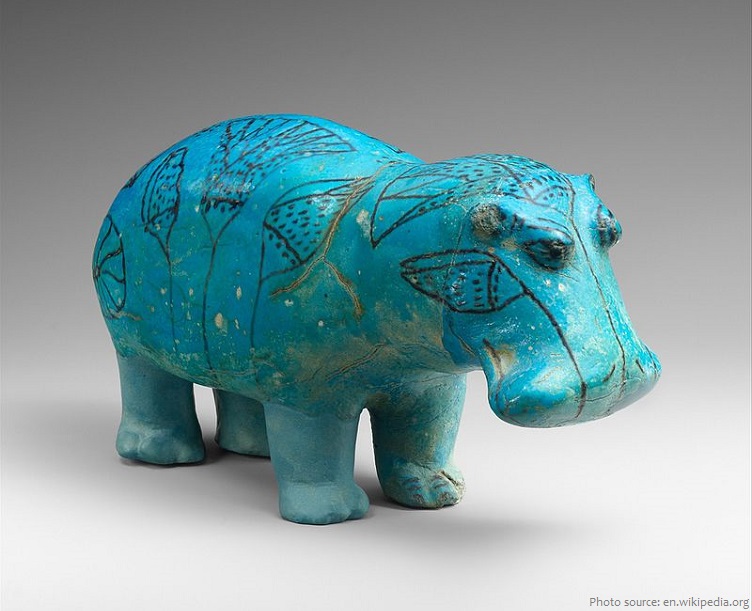 The oldest items at the Met, a set of Archeulian flints from Deir el-Bahri which date from the Lower Paleolithic period (between 300,000 and 90,000 BC), are part of the Egyptian collection.

The oldest work is an Iranian storage jar dating back to 3800 to 3700 B.C. In the fourth millennium B.C. in central and southwestern Iran, painted decoration on pottery like this large jar reached a new level of sophistication. 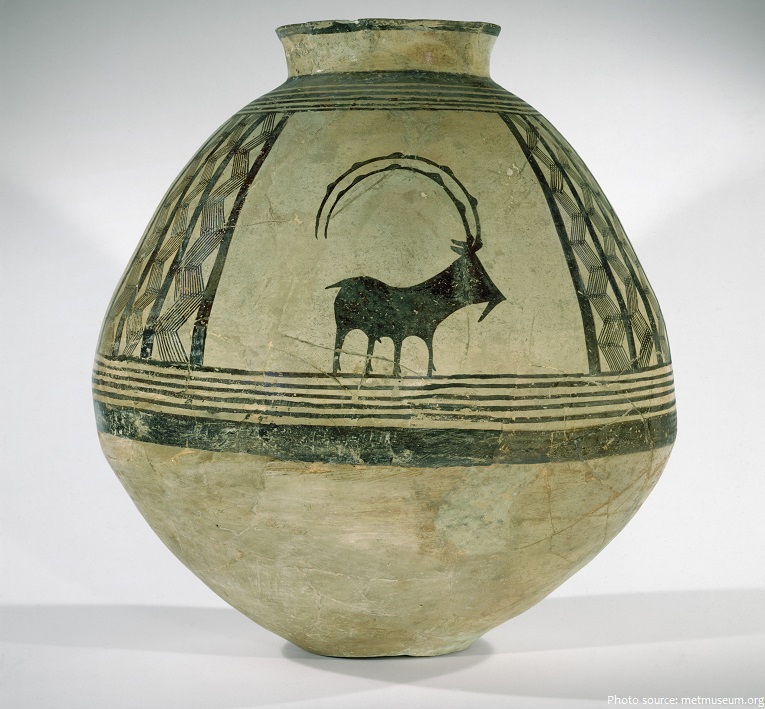 The Met’s collection of musical instruments contain the oldest piano in existence, and one of only three that survive from the workshop of the inventor of the piano, Bartolomeo Cristofori. The antique instrument dates back to 1720. 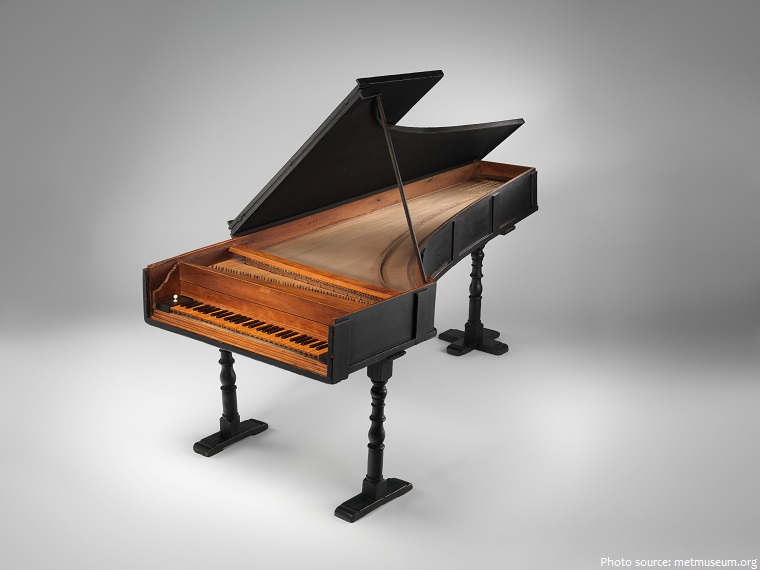 The museum’s longest work is a 16th century Egyptian carpet named the “Simonetti” carpet after a former owner, this majestic weaving is among the most famous of all Mamluk carpets. The carpet is 8.97 x 2.39 meters (353 x 94 inches)

The smallest work is a 2.8-centimeter (1.1-inch) cylinder from ancient Mesopotamia that was used to stamp impressions on clay. 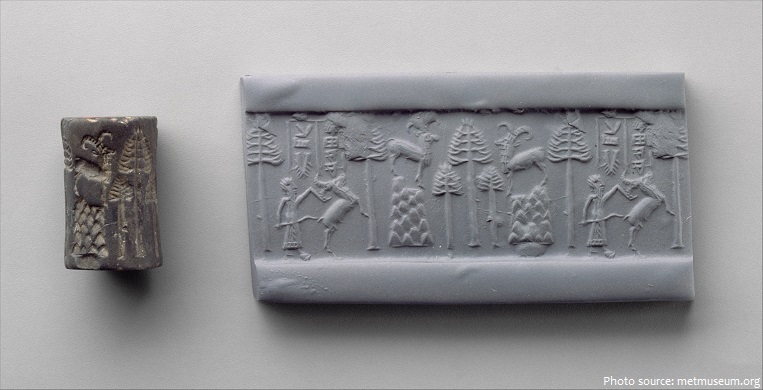 The museum’s first accessioned object was a Roman sarcophagus, currently on display in the collection of Greek and Roman art. 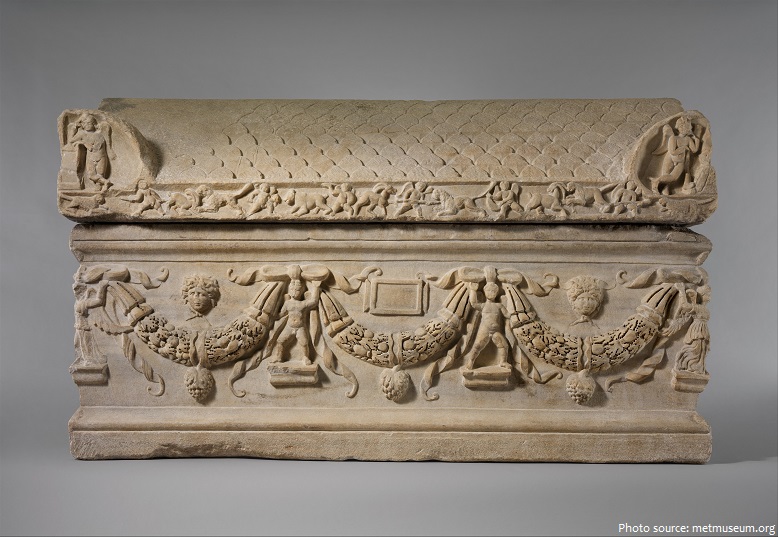 The European Sculpture and Decorative Arts collection is one of the largest departments at the Met, holding in excess of 50,000 separate pieces from the 15th through the early 20th centuries. Though the collection is particularly concentrated in Renaissance sculpture it also contains comprehensive holdings of furniture, jewelry, glass and ceramic pieces, tapestries, textiles, and timepieces and mathematical instruments. 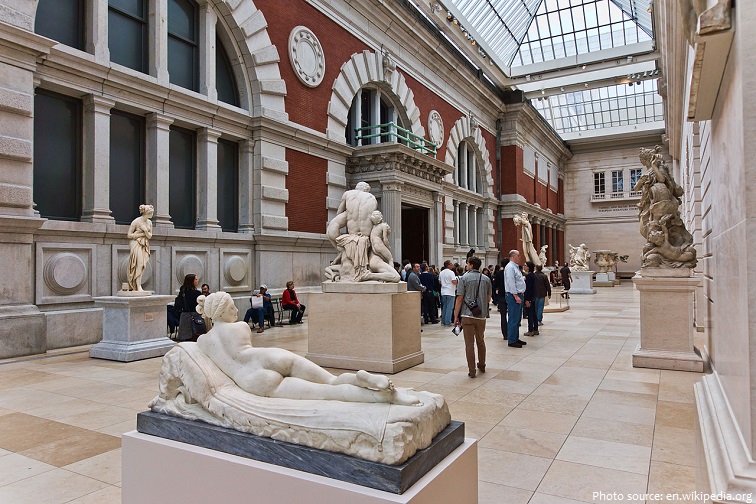 The Met’s Department of Arms and Armor is one of the museum’s most popular collections. The collection comprises approximately 14,000 objects, of which more than 5,000 are European, 2,000 are from the Near East, and 4,000 from the Far East. It is one of the most comprehensive and encyclopedic collections of its kind. 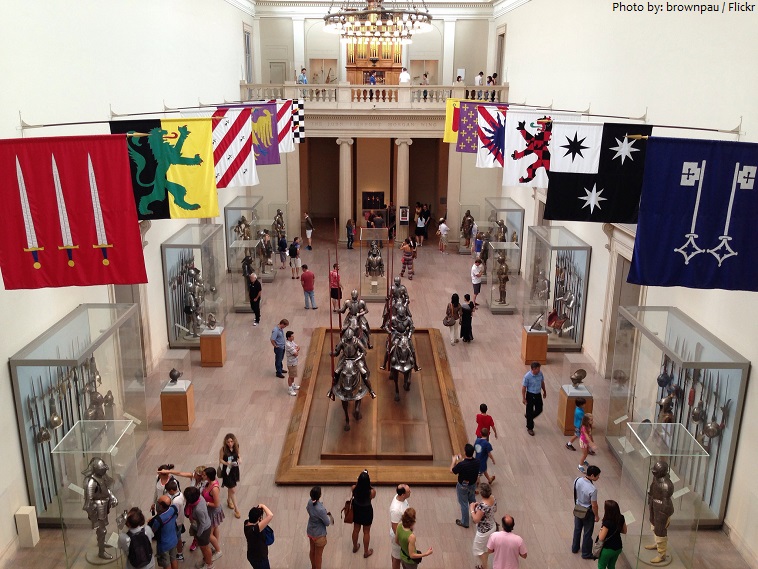 Ever since its establishment in 1870 the Museum has acquired important examples of American Art. A separate “American Wing” building to display the domestic arts of the 17th–early 19th centuries opened in 1924; paintings galleries and an enclosed sculpture court were added in 1980. 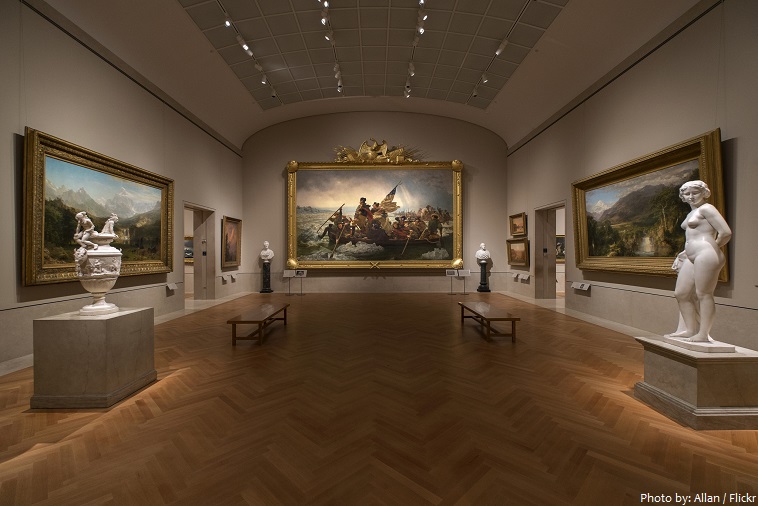 In addition to its permanent exhibitions, the Met organizes and hosts large traveling shows throughout the year.

Approximately 400,000 pieces in the collections of the Met can be found online.

The Roof Garden is located on the roof near the southwestern corner of the museum. The garden’s cafe and bar is a popular museum spot during the mild-weathered months, especially on Friday and Saturday evenings when large crowds can lead to long lines at the elevators.

Each week, Remco van Vliet—a Dutch florist whose father’s flower shop once supplied blooms for the country’s royal family—produces five towering bouquets for the Met’s Great Hall. Floral arrangements are comprised of fresh, seasonal vegetation and can be as tall as 3 to 3.5 meters (10 to 12 feet).

In 2016, the museum set a record for attendance, attracting 6.7 million visitors — the highest number since the museum began tracking admissions. Forty percent of the Met’s visitors in fiscal year 2016 came from New York City and the tristate area; 41 percent from 190 countries besides the United States.

As of 2017, the museum’s endowment is $2.5 billion which provides much of the income for operations while admissions account for only 13% of revenue as of fiscal 2016, down from 16 percent the year before. 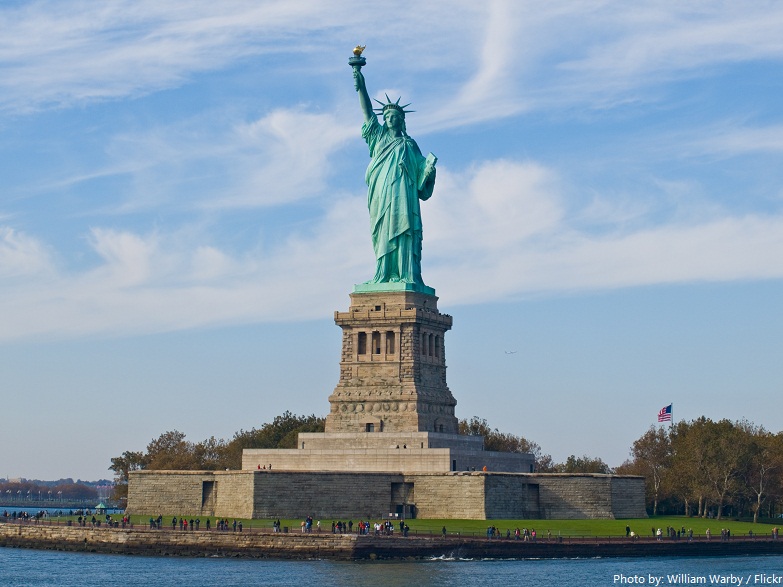