The wild boar also called the wild pig or wild swine is any of the wild members of the family Suidae.

There are 16 subspecies are recognized.

Wild boars are native to forests ranging from western and northern Europe and North Africa to India, the Andaman Islands, and China.

They were widely introduced to North America and are considered an invasive species in the southeastern United States and California.

Today, wild boars are common throughout Eurasia, and inhabit every continent except Antarctica. 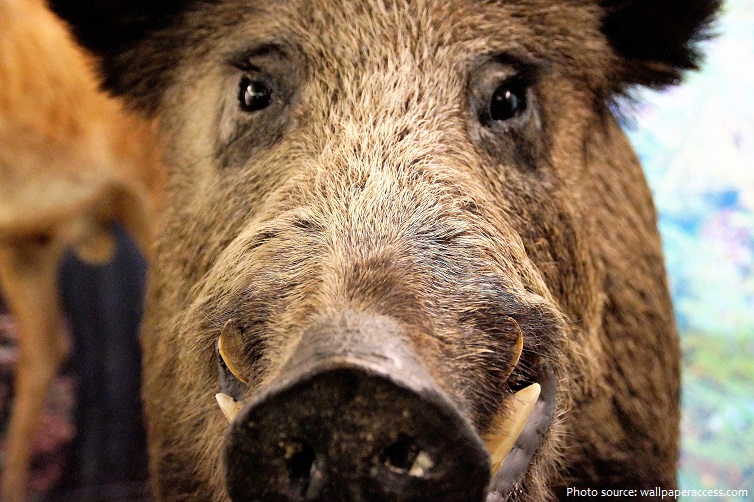 The wild boar is one of the widest-ranging mammals in the world, as well as the most widespread suiform.

The wild boar is a bulky, massively built with short and relatively thin legs.

The animals are swift, nocturnal, and omnivorous and are good swimmers. 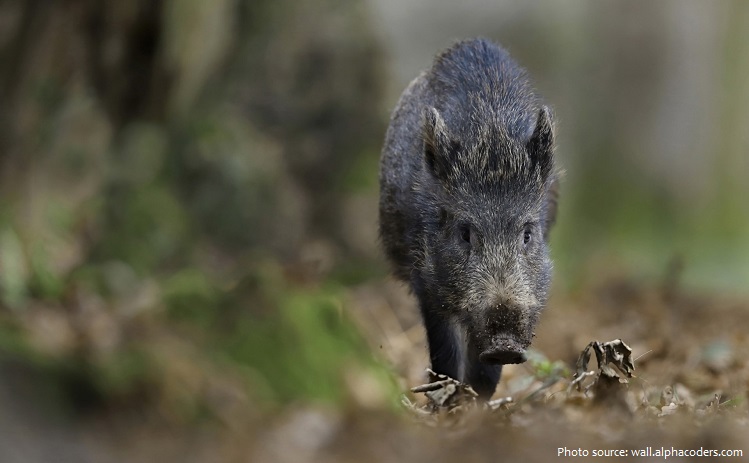 Their primary defense is speed, but when cornered, they can behave quite fiercely. Their lower tusks, which can get to be about 7 cm (3 inches) long, are razor sharp and make excellent weapons!

They are normally unaggressive, but they can be dangerous.

Pigs don’t sweat, which is one reason they need to cool off in water and mud wallows.

Pigs have excellent senses of smell and hearing and communicate with one another using a variety of grunts, squeaks, and chirrups. Calls are made to keep in touch with the rest of the group or to warn of danger. 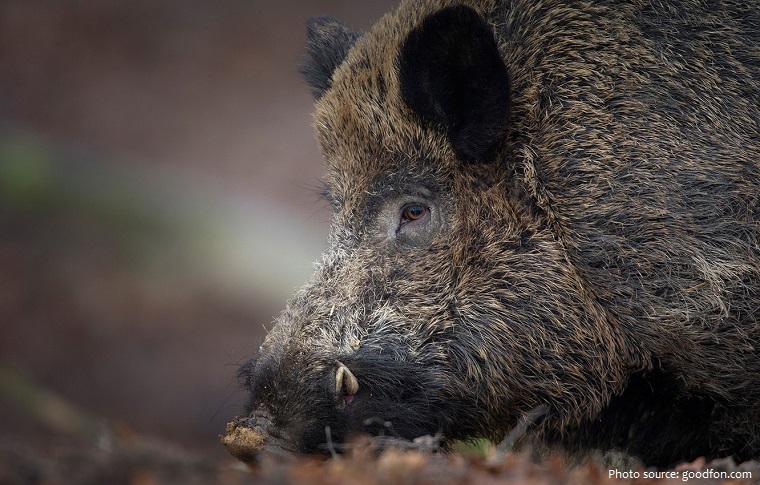 The wild boar is a highly versatile omnivore, whose diversity in choice of food is comparable to that of humans. Their foods can be divided into four categories:
• Rhizomes, roots, tubers and bulbs, all of which are dug up throughout the year in the animal’s whole range.
• Nuts, berries and seeds, which are consumed when ripened and are dug up from the snow when abundant.
• Leaves, bark, twigs and shoots, along with garbage.
• Earthworms, insects, mollusks, fish, rodents, insectivores, bird eggs, lizards, snakes, frogs and carrion. Most of these prey items are taken in warm periods 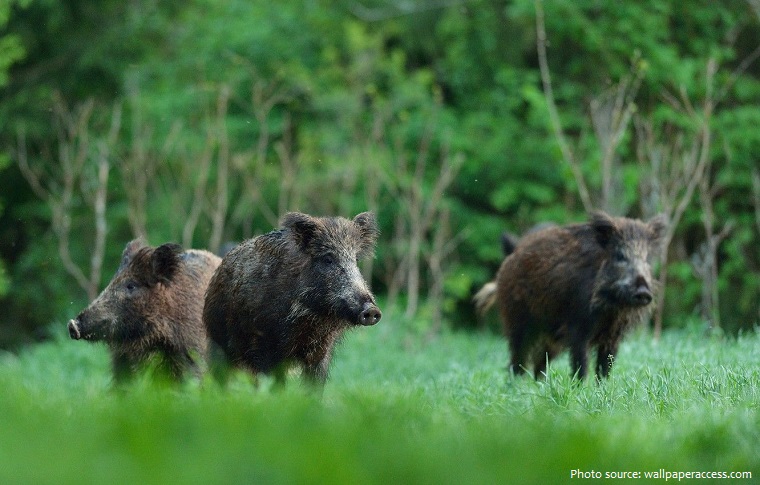 An acute sense of smell allows wild boars to detect an edible root or tuber 25 cm (10 inches) below the soil. Because of this behavior, wild swine have become infamous for rooting through and destroying large portions of farmer’s crops.

Wild boars tend to live in groups that are made up of 6 to 20 members, but may contain over 100 individuals.

The wild boar lives in matriarchal societies consisting of interrelated females and their young (both male and female). Fully grown males are usually solitary outside the breeding season. 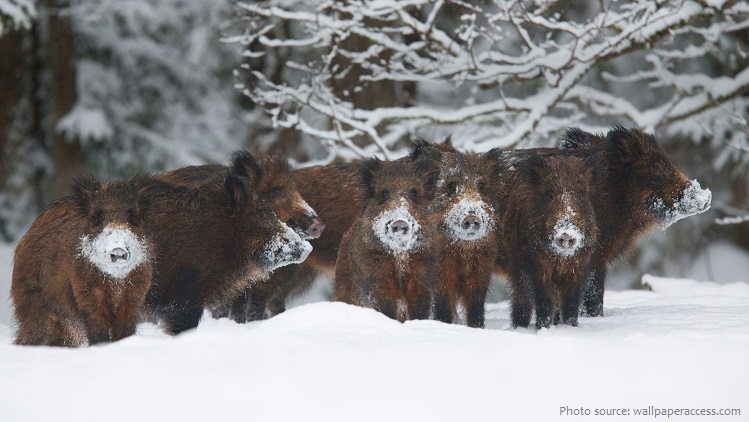 Wild boars are capable of reproducing at any time during the year. Mating is usually dependent on the climate, which can directly affect food availability. A sow’s gestation period lasts 108 to 120 days. When ready to give birth, the pregnant sow looks for a secluded place, where she makes a nest by digging a shallow hole and lining it with plant material. A wild boar typically produce 5 to 6 babies in a litter.

The grey wolf is the wild boar’s main predator in most of its natural range except in the Far East and the Lesser Sunda Islands, where it is replaced by the tiger and Komodo dragon respectively

Humans have been hunting boar for millennia, the earliest artistic depictions of such activities dating back to the Late Stone Age. 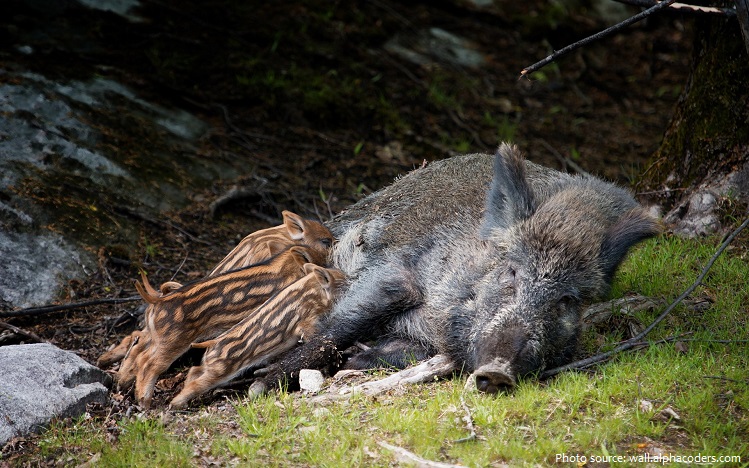 The animal was seen as a source of food among the Ancient Greeks, as well as a sporting challenge and source of epic narratives.

The Romans inherited this tradition, and boar hunting became particularly popular among the young nobility during the 3rd century BC as preparation for manhood and battle.

More than their Greek predecessors, the Romans extensively took inspiration from boar hunting in their art and sculpture.

With the ascension of Constantine the Great, boar hunting took on Christian allegorical themes, with the animal being portrayed as a “black beast” analogous to the dragon of Saint George. 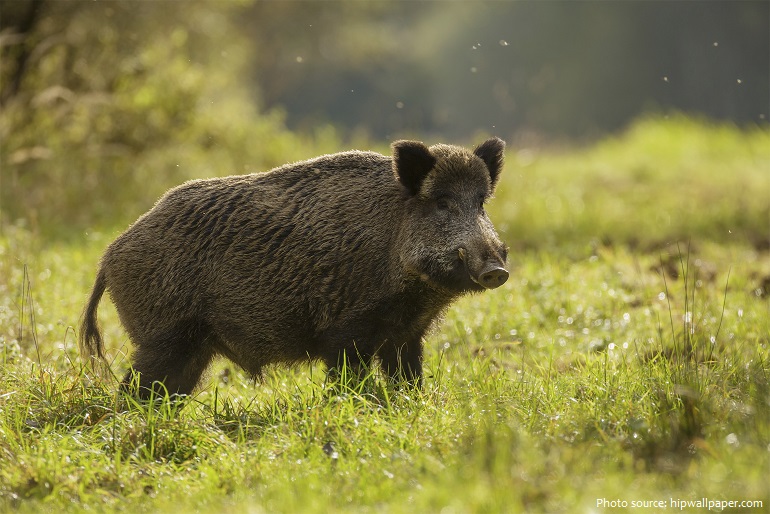 The importance of the boar as a culinary item among Celtic tribes may have been exaggerated in popular culture by the Asterix series, as wild boar bones are rare among Celtic archaeological sites and the few that do occur show no signs of butchery, having probably been used in sacrificial rituals.

In Japanese culture, the boar is widely seen as a fearsome and reckless animal, to the point that several words and expressions in Japanese referring to recklessness include references to boars. The boar is the last animal of the Oriental zodiac, with people born during the year of the Pig being said to embody the boar-like traits of determination and impetuosity.

In Europe the boar is one of the four heraldic beasts of the chase and was the distinguishing mark of Richard III (1452), king of England.

Wild boars are the ancestors of domestic pigs.