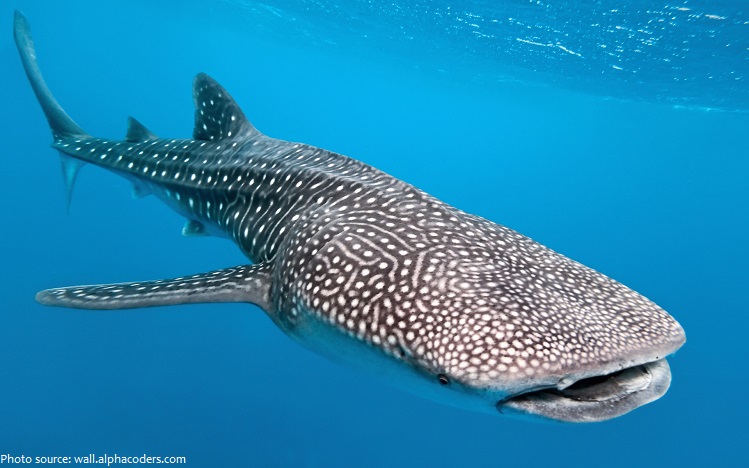 The whale shark (Rhincodon typus) is the largest fish and shark in the world.

The whale shark is found in open waters of the tropical oceans and is rarely found in water below 22 °C (72 °F). They are usually restricted to around +- 30 degrees of latitude.

Scientists estimate that the lifespan of the whale shark ranges from 70 to 100 years.

The whale shark is also the largest non-cetacean animal in the world. 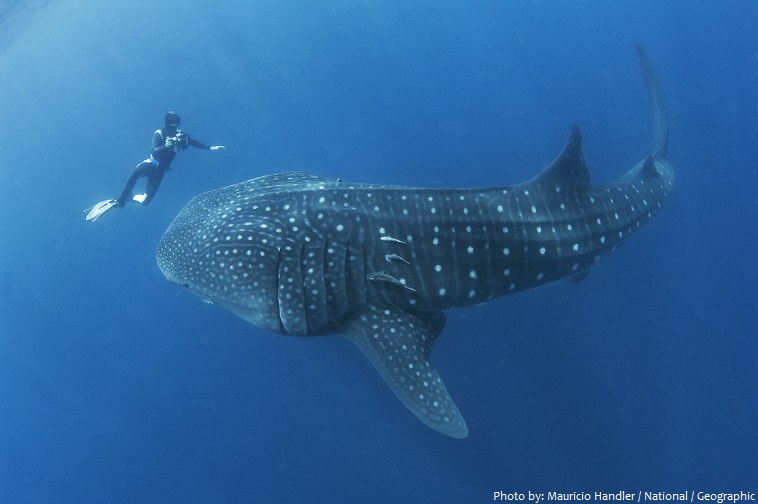 Stories exist of vastly larger specimens – quoted lengths of 18 meters (59 ft) and 45.5 tonnes (100,000 lb) are common in the popular literature, but no scientific records support their existence.

The head is wide and flat with two small eyes at the front. The mouth, positioned at the tip of the snout is about 1.5 meters (4.9 feet) wide. 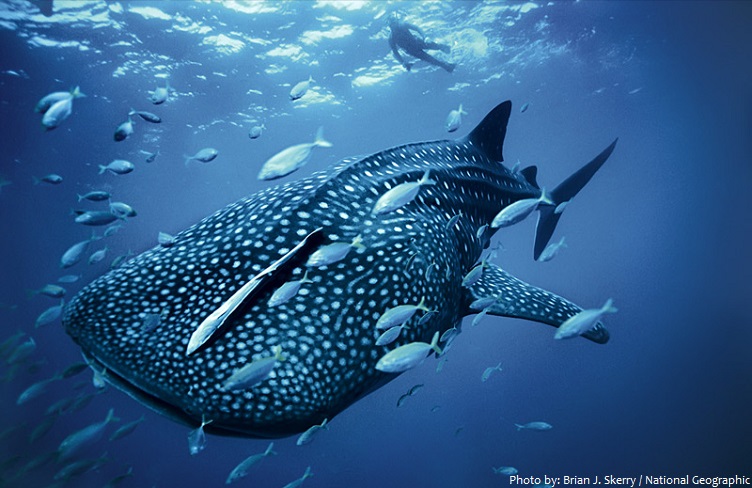 The shark has a pair of dorsal fins and pectoral fins; the tail has a half-moon shape.

The whale shark has over 300 to 350 rows of tiny teeth in its mouth, but the function of these teeth is unknown.

Whale sharks are grey with a white belly. Their skin is marked with pale yellow spots and stripes which are unique to each individual.

The gigantic fish appears surprisingly graceful, moving its entire body from side to side as it navigates the vast seas.

Whale sharks are solitary creatures. But they don’t shy away from sharing feeding grounds with other whale sharks. 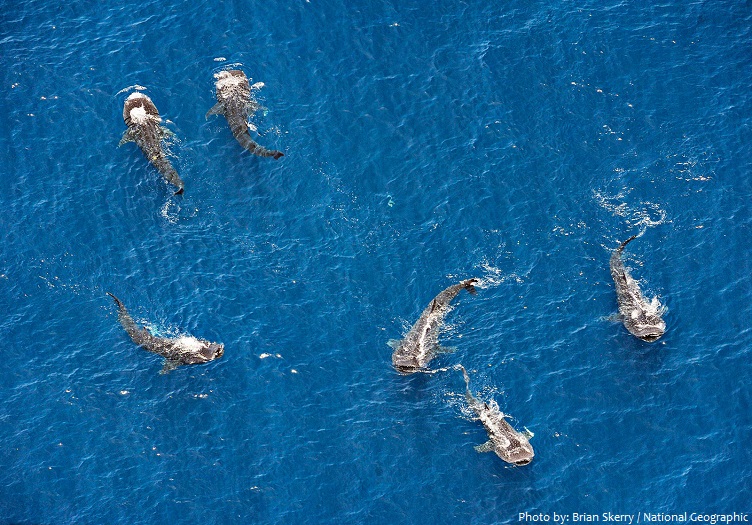 They spend most of their time near the surface. However, it is known to occasionally dive to depths of as much as 1,800 metres (5,900 feet).

The whale shark is a filter feeder. In order to eat, the whale shark juts out its formidably sized jaws and passively filters everything in its path. This technique has often been referred to as cross-flow filtration, which is a process similar to that of some bony fish, as well as baleen whales. 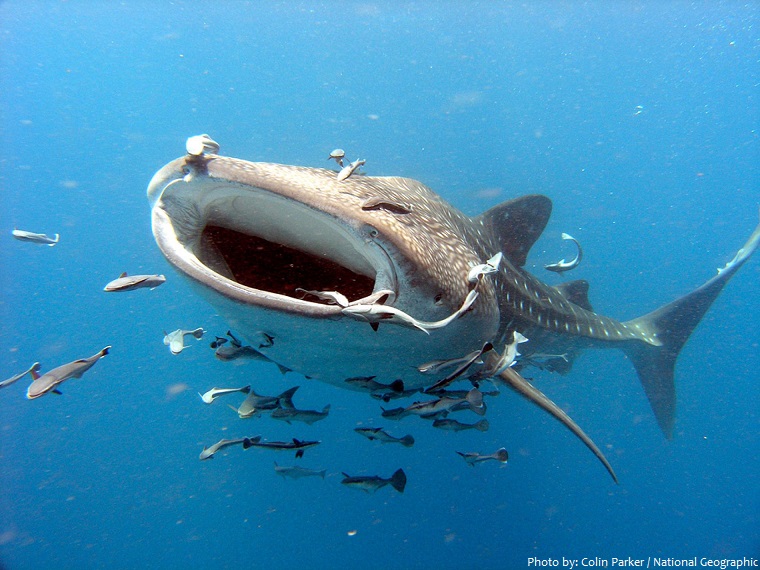 The whale shark feeds on plankton including copepods, krill, fish eggs, Christmas Island red crab larvae and small nektonic life, such as small squid or fish. It also feeds on clouds of eggs during mass spawning of fish and corals.

According the Shark Research Institute, a study revealed that whale sharks spend up to 7.5 hours per day eating and that a 6-meter (20-foot) whale shark (still a juvenile) eats 21 kilograms (46 pounds), of plankton per day!

This shark is a slow swimmer with an average speed of just 5 kilometers (3 miles) per hour. 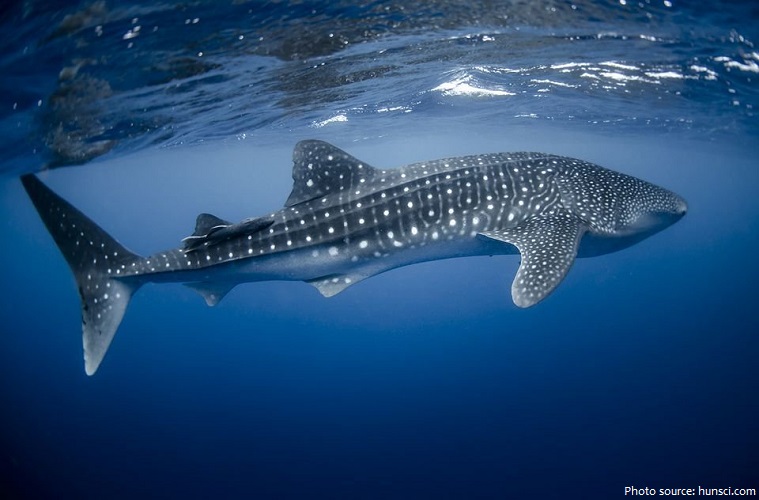 Whale sharks are known to gather at a dozen major feeding locations around the world, from western Australia and Indonesia to Belize. But between May and September, the waters of Mexico‘s Quintana Roo state, on the northeastern Yucatan Peninsula, draw far more animals than other spots and attract an estimated 800 or more in a given season.

After years of tagging and tracking, researchers are in agreement on one important discovery: whale sharks will return to nutrient-rich feeding areas in subsequent years.

Much of the sharks’ lives seem to occur in the open sea, where they’re hard to observe, leaving chunks of their lives a mystery. For instance, no one has ever seen whale sharks mate. 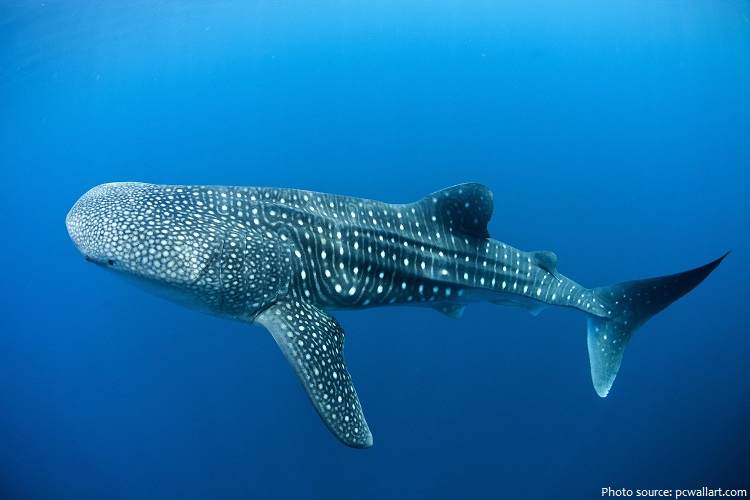 Whale sharks become sexually mature at the age of 30. Females are ovoviviparous, which means that females produce eggs, but the young hatch inside of the mother instead of in the water like most fish. Then, the female gives birth to about 300 live young. Newborns are 40 to 60 centimeters (16 to 24 inches) long.

Based on the path traveled by one female shark from the coast of Quintana Roo, scientists hypothesized that female whale sharks travel to the open waters of the Mid-Atlantic where they give birth in relative seclusion.

The name “whale shark” comes from the fish’s size, being as large as some species of whales and also a filter feeder like baleen whales. 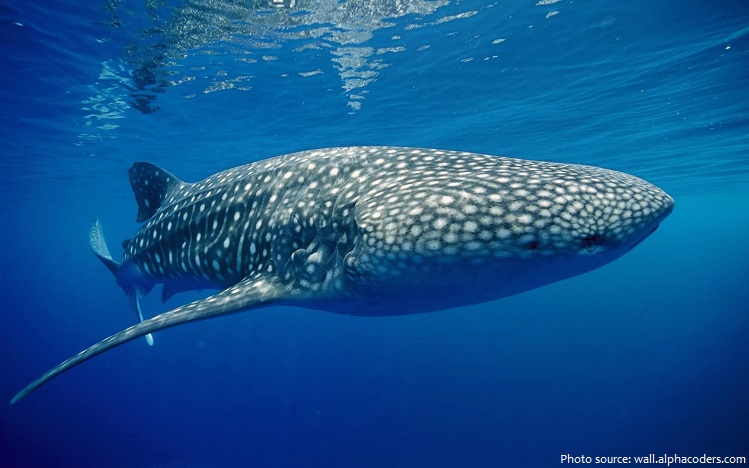 The species originated about 60 million years ago.

Despite their size, they are not free from predators in their natural habitat. Orcas, blue sharks, white sharks and blue marlin attack mainly young individuals who are still vulnerable because of their small size.

The species is considered endangered by the IUCN due to the impacts of fisheries, bycatch losses, and vessel strikes, combined with its long life span and late maturation.

They are commercially fished in numerous locations around the world, and are highly valued in international markets. There is a high demand for whale shark meat, fins, and oils in these markets,
particularly provided by unregulated fisheries. A single whale shark pectoral fin can sell for up to $20,000, making it one of the most sought after of all sharks in the fin trade.

Despite its size, the whale shark does not pose a threat to to humans and are often referred to as “gentle giants”.

Whale sharks are docile fish and sometimes allow swimmers to catch a ride, although this practice is discouraged by shark scientists and conservationists because of the disturbance to the sharks.

In Vietnamese culture, the whale shark is revered as a deity called Cá Ông, which literally translates as “Lord Fish”.

The whale shark is featured on the reverse of the Philippine 100-peso bill. 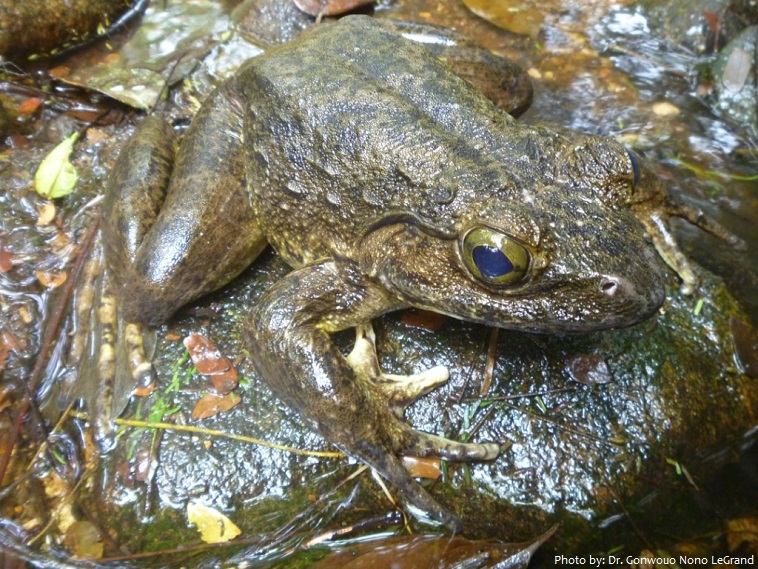 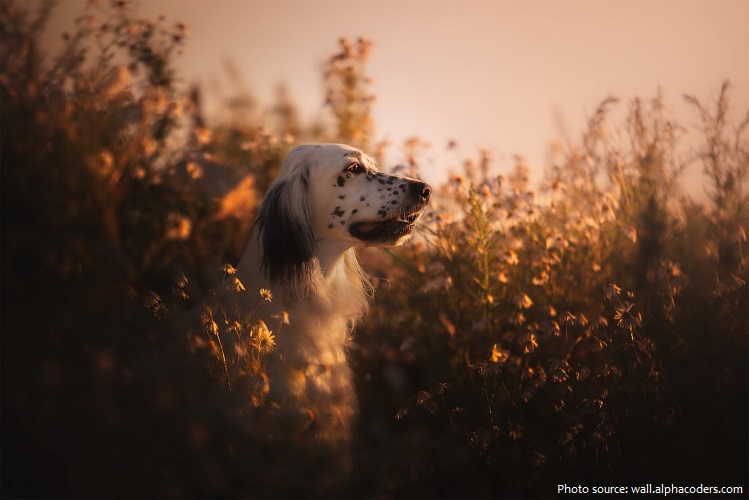 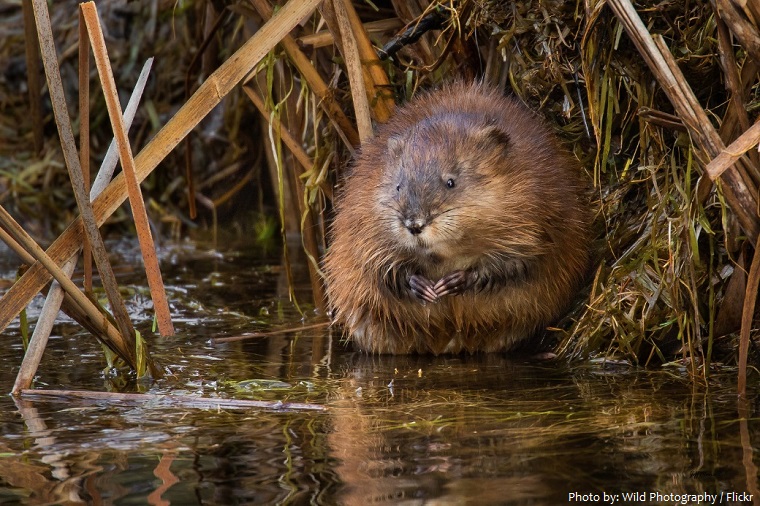