Interesting facts about the Yukon River

The Yukon River is a major watercourse of northwestern North America.

The name Yukon is derived from the Gwich’in language and means “great river.”

The source of the river is located in the northwest corner of British Columbia from which it proceeds to flow through Yukon Territory into Alaska and empties into the Bering Sea at the Yukon-Kuskokwim Delta.

The Yukon River is the third longest river in North America. 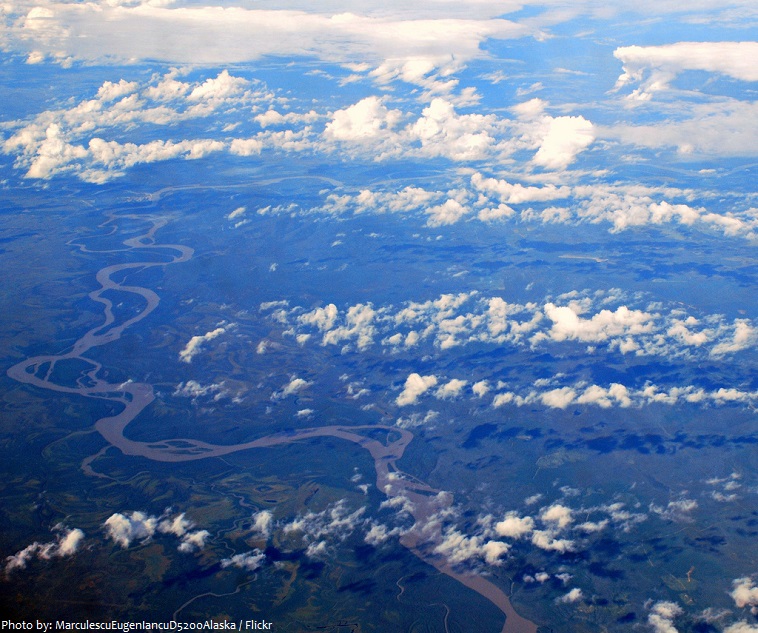 It is the longest river in Alaska and the Yukon.

The Yukon–Kuskokwim Delta is a river delta located where the Yukon and Kuskokwim rivers empty into the Bering Sea on the west coast of the U.S. state of Alaska. At approximately 129,500 square kilometers (50,000 sq mi) in size, it is one of the largest deltas in the world. It is larger than the Mississippi Delta, and comparable in size to the entire U.S. state of Louisiana. The delta, which consists mostly of tundra, is protected as part of the Yukon Delta National Wildlife Refuge.

This huge area was occupied solely by North American Indians until the mid-19th century, when peoples of European descent (including explorers from the eastward-expanding Russian Empire) began to move into the region, first as fur traders and then in search of mineral wealth.

It was one of the main ways that people travelled during the 1896–1903 Klondike Gold Rush.

Paddle-wheel riverboats continued as the dominant form of transportation along the river until the 1950s when the Klondike Highway was completed. 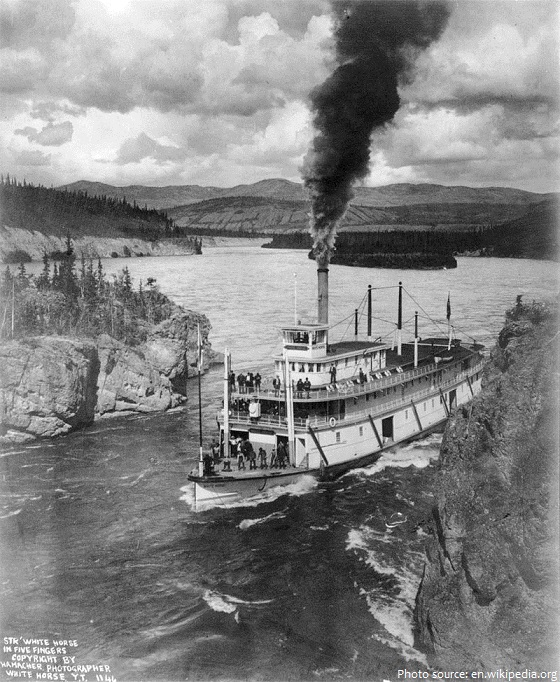 After the purchase of Alaska by the United States in 1867, the Alaska Commercial Company acquired the assets of the Russian-American Company and constructed several posts at various locations on the Yukon River.

Despite its length, there are only four vehicle-carrying bridges across the river.

A car ferry crosses the river at Dawson City in the summer; it is replaced by an ice bridge over the frozen river during the winter.

The Yukon River is home to one of the longest salmon runs in the world. Each year coho, chum, and Chinook (aka king) salmon return to their terminal streams in Alaska, the Yukon Territories, and British Columbia. 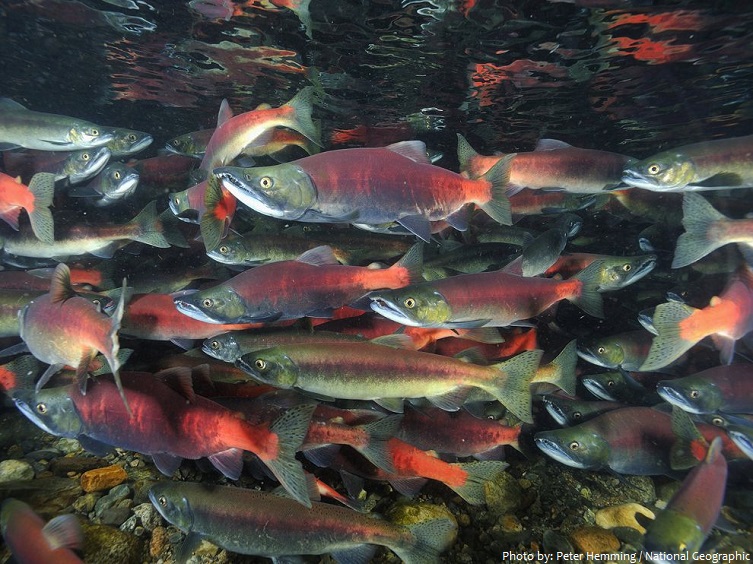 Whitehorse Fishway on the Yukon River at the Whitehorse dam is the longest wooden fish ladder in the world at 366 meters (1,200 feet) long. It helps migrating Chinook salmon on the final leg of their epic journey.

The villages along the Yukon have historically and continue to rely on salmon for their cultural, subsistence, and commercial needs. Salmon are traditionally dried, smoked, and frozen for both human and sled dog consumption. Common methods of fishing on the Yukon include set gillnets, drift nets, dip nets, and fish wheels. 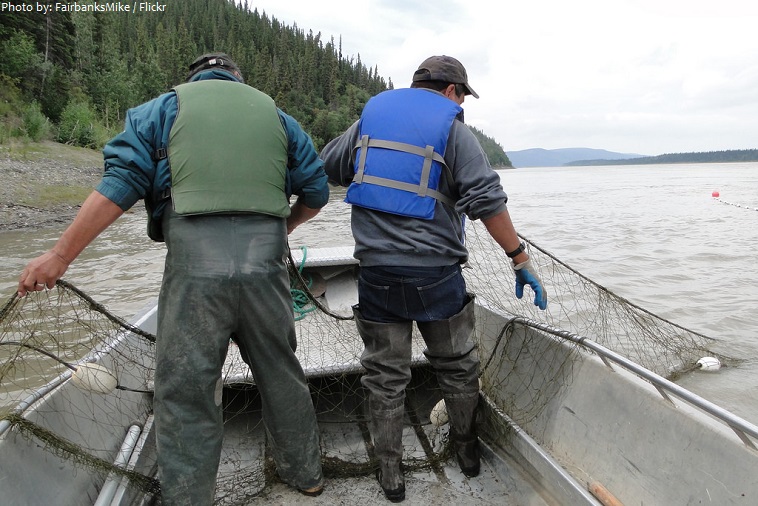 The Yukon River Inter-Tribal Watershed Council is made up of 66 First Nations and tribes in Alaska and Canada, living along the Yukon River. The council serves as a lobby group for protecting and cleaning up the Yukon.

The Yukon basin is one of the most sparsely populated and least developed regions of North America.

Perhaps the main resource of the Yukon basin is its scenery, isolation, and sparse population, all of which are attractive to tourists seeking to escape the more crowded and less scenically endowed areas of the continent. 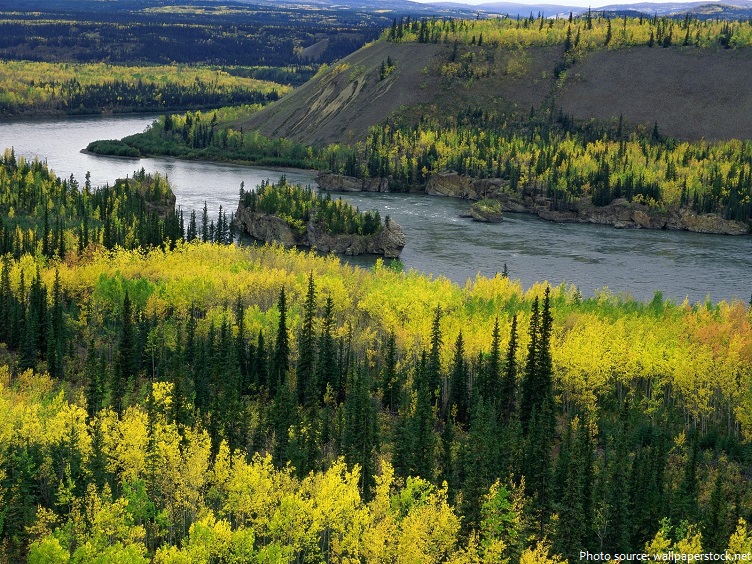 There is a lot more to the Yukon River than exquisite landscape, as wolves, grizzly bears and moose are often seen at the river’s edge. Ospreys, golden eagles and vividly-coloured mountain bluebirds fill the skies, and otters and beavers occupy the water.

The Yukon River is used to generate hydroelectricity, but it remains one of the greatest undeveloped hydroelectric resources in North America.

The Lewes River is the former name of the upper course of the Yukon, from Marsh Lake to the confluence of the Pelly River at Fort Selkirk

A portion of the river in Yukon — “The Thirty Mile” section, from Lake Laberge to the Teslin River — is a national heritage river and a unit of Klondike Gold Rush International Historical Park.

The Yukon River Quest, at 715 kilometers (444 miles) is the longest annual canoe and kayak race in the world.

The Yukon River features as the setting for the 2015 National Geographic Channel series Yukon River Run.

One response to “Interesting facts about the Yukon River”