The church contains the two holiest sites in Christianity: the site where Jesus of Nazareth was crucified, known as “Calvary” in Latin and “Golgotha” in Greek, and Jesus’s empty tomb, where he is said to have been buried and resurrected.

According to Eusebius of Caesarea, the Roman emperor Hadrian in the 2nd century AD built a temple dedicated to the goddess Aphrodite in order to bury the cave in which Jesus had been buried.

The first Christian emperor, Constantine the Great, ordered in about 325/326 that the temple be replaced by a church. 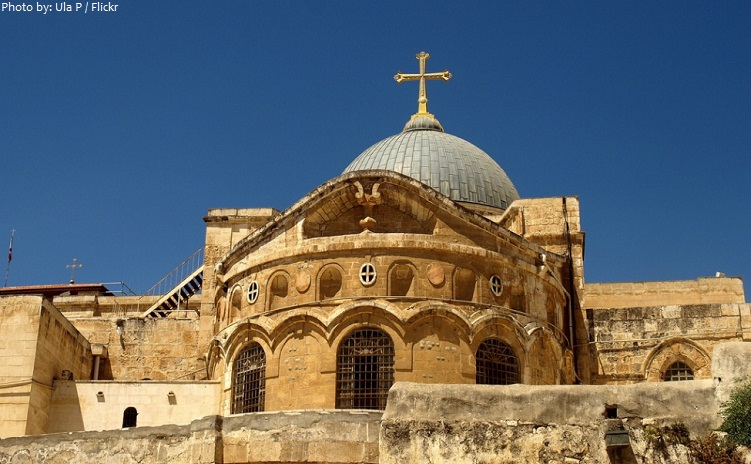 During the building of the Church, Constantine’s mother, Helena, is believed to have rediscovered the “True Cross”. Historians Gelasius of Caesarea and Rufinus claimed that she discovered the hiding place of three crosses that were believed to be used at the crucifixion of Jesus and of two thieves, St. Dismas and Gestas, executed with him, and that a miracle revealed which of the three was the True Cross.

The church was severely damaged by fire in 614 AD when the Persians invaded Jerusalem. They also captured the True Cross, but in 630, Emperor Heraclius marched triumphantly into Jerusalem and restored the True Cross to the rebuilt Church of the Holy Sepulchre.

After Jerusalem was captured by the Arabs in 638, it remained a Christian church, with the early Muslim rulers protecting the city’s Christian sites. But this changed on October 18, 1009, when Fatimid caliph Hakim brutally and systematically destroyed the great church.

In wide ranging negotiations between the Fatimids and the Byzantine Empire in 1027–8, an agreement was reached whereby the new Caliph Ali az-Zahir (Al-Hakim’s son) agreed to allow the rebuilding and redecoration of the Church.

The rebuilding was finally completed with the financing at a huge expense by Emperor Constantine IX Monomachos and Patriarch Nicephorus of Constantinople in 1048. 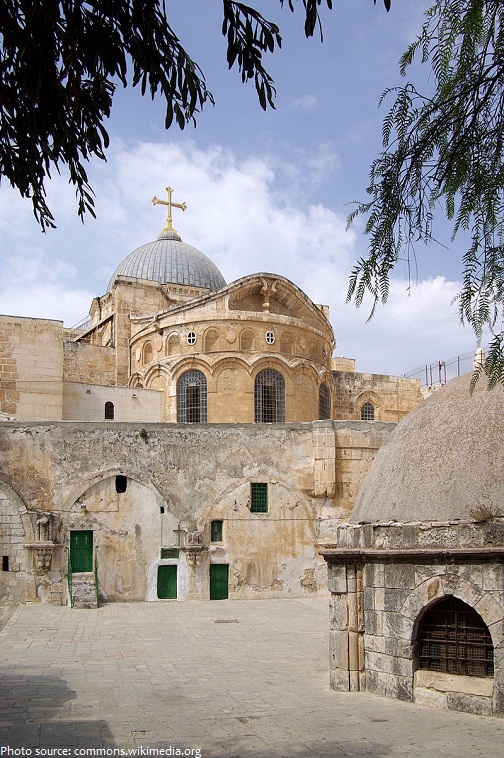 The rebuilt church site was taken from the Fatimids by the knights of the First Crusade on 15 July 1099. The Crusader chief Godfrey of Bouillon, who became the first king of Jerusalem, declared himself Advocatus Sancti Sepulchri, “Defender of the Holy Sepulchre.”

The three primary custodians of the church, first appointed when Crusaders held Jerusalem, are the Greek Orthodox, the Armenian Apostolic and Roman Catholic churches. In the 19th century, the Coptic Orthodox, the Ethiopian Orthodox and the Syrian Orthodox acquired lesser responsibilities, which include shrines and other structures within and around the building. An agreement regulates times and places of worship for each Church. 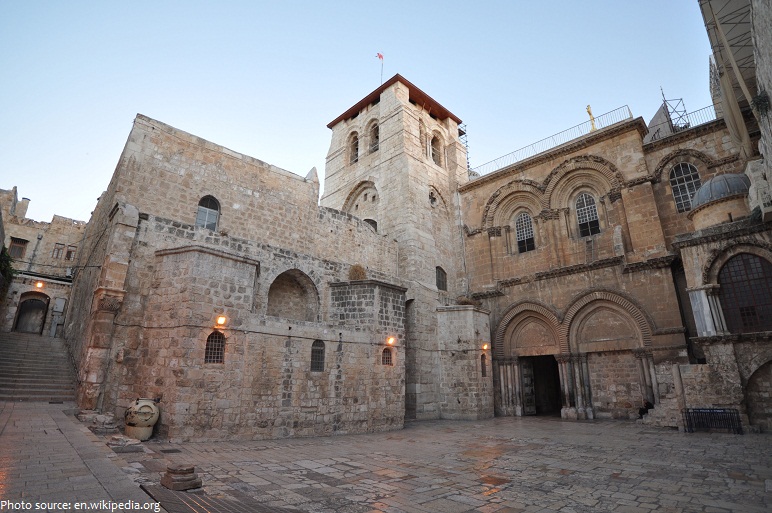 Subsequent centuries were not altogether kind to the Church of the Holy Sepulchre. It suffered from damage, desecration, and neglect, and attempts at repair (a significant renovation was conducted by the Franciscans in 1555) often did more damage than good. In recent times, a fire (1808) and an earthquake (1927) did extensive damage.

Not until 1959 did the three major communities (Latins, Greeks, Armenians) agree on a major renovation plan. The guiding principle was that only elements incapable of fulfilling their structural function would be replaced.

The exterior facade of the Church of the Holy Sepulchre, on the east side of the church, was built by the Crusaders sometime before 1180. 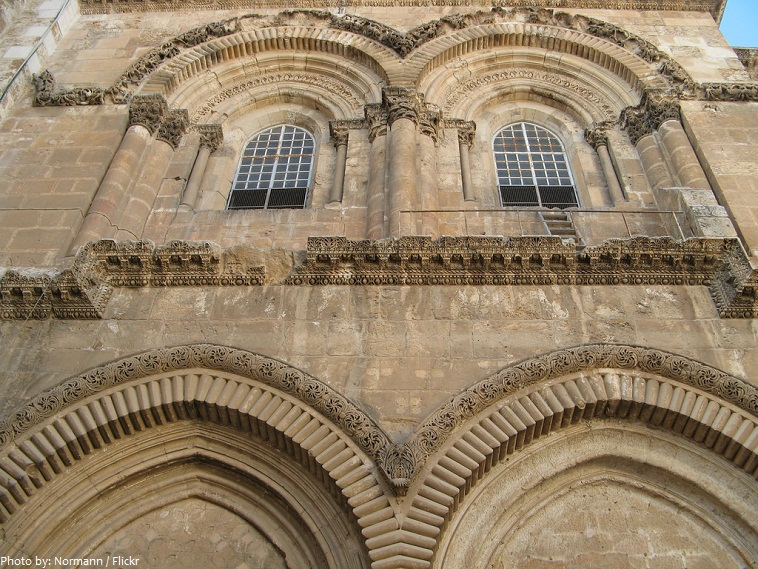 The entrance to the church, a single door in the south transept — through the crusader facade. 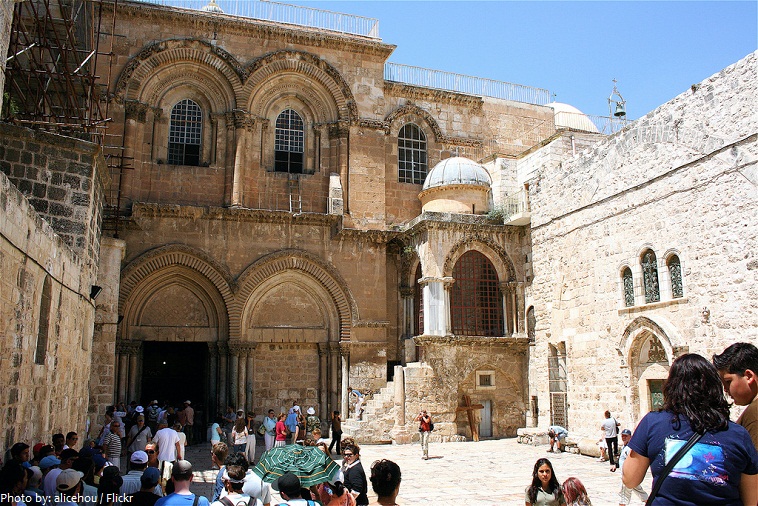 On the south side of the altar, via the ambulatory (covered passage), is a stairway climbing to Calvary (Golgotha), traditionally regarded as the site of Jesus’ crucifixion and the most lavishly decorated part of the church. 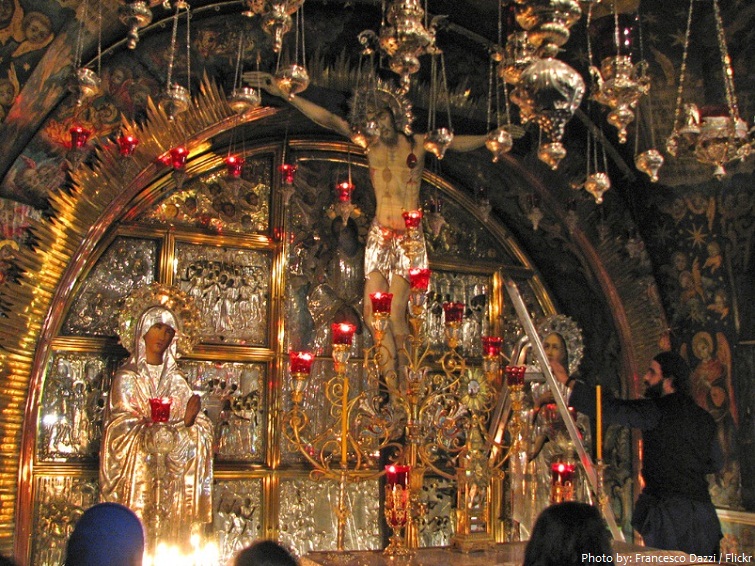 The main altar there belongs to the Greek Orthodox, which contains the Rock of Calvary.The rock can be seen under glass on both sides of the altar, and beneath the altar there is a hole said to be the place where the cross was raised. Due to the significance of this, it is the most visited site in the Church of the Holy Sepulchre. 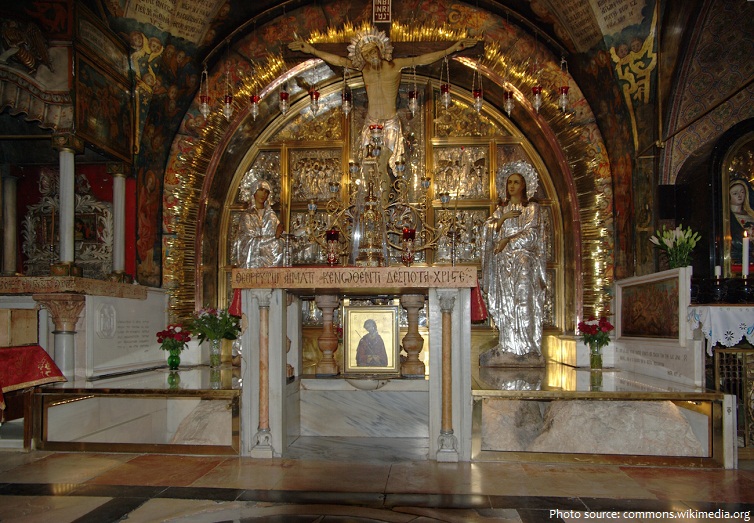 The Roman Catholics (Franciscans) have an altar to the side, the Chapel of the Nailing of the Cross. On the left of the altar, towards the Eastern Orthodox chapel, there is a statue of Mary, believed by some to be miraculous. 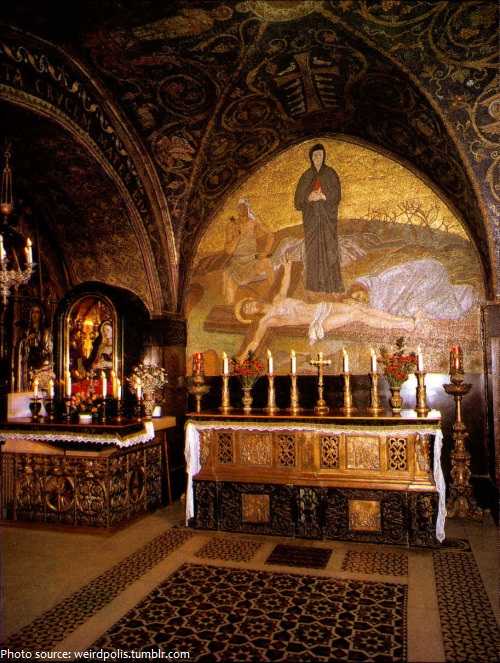 Beneath the Calvary and the two chapels there, on the main floor, there is the Chapel of Adam. According to tradition, Jesus was crucified over the place where Adam’s skull was buried. According to some, at the crucifixion, the blood of Christ ran down the cross and through the rocks to fill the skull of Adam. The Rock of Calvary appears cracked through a window on the altar wall, with the crack traditionally claimed to be caused by the earthquake that occurred when Jesus died on the cross, while some scholars claim it to be the result of quarrying against a natural flaw in the rock. 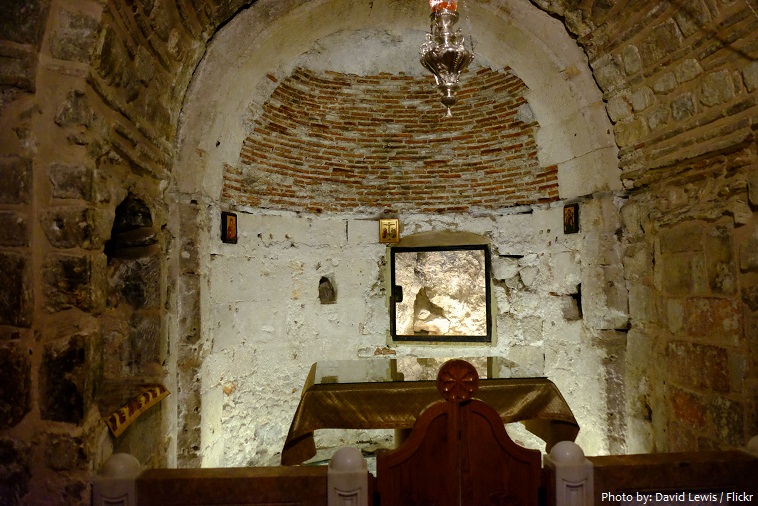 Just inside the entrance to the church is the Stone of Anointing ,which tradition believes to be the spot where Jesus’ body was prepared for burial by Joseph of Arimathea. However, this tradition is only attested since the crusader era, and the present stone was only added in the 1810 reconstruction. 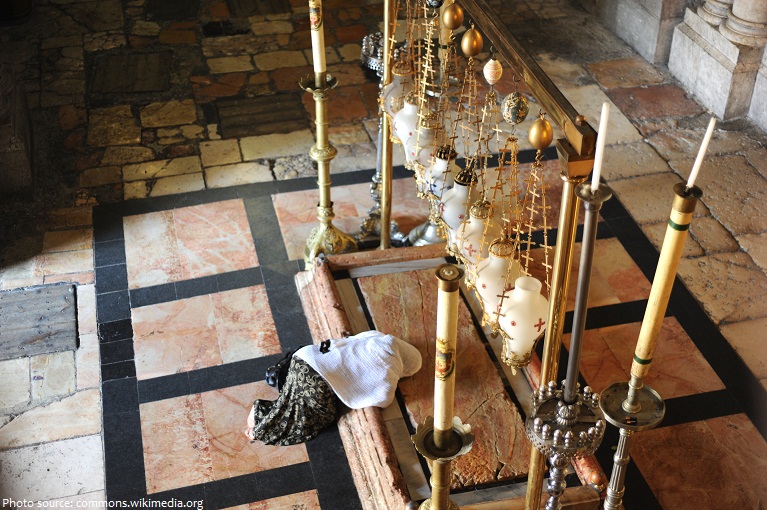 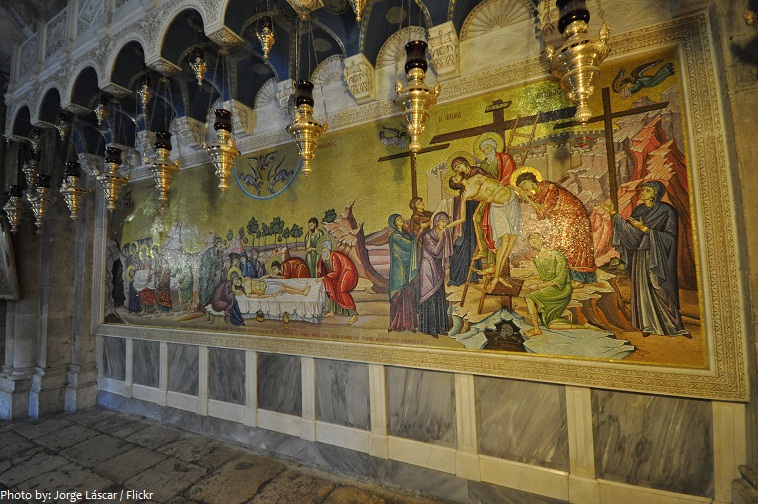 The Rotunda is located in the center of the Anastasis, beneath the larger of the church’s two domes. The dome is decorated with a 12-pointed star (1997) whose rays symbolize the outreach of the 12 apostles. The diameter of the dome is about 20.5 meters (67.2 feet); the height is 34 meters (111.5 feet). 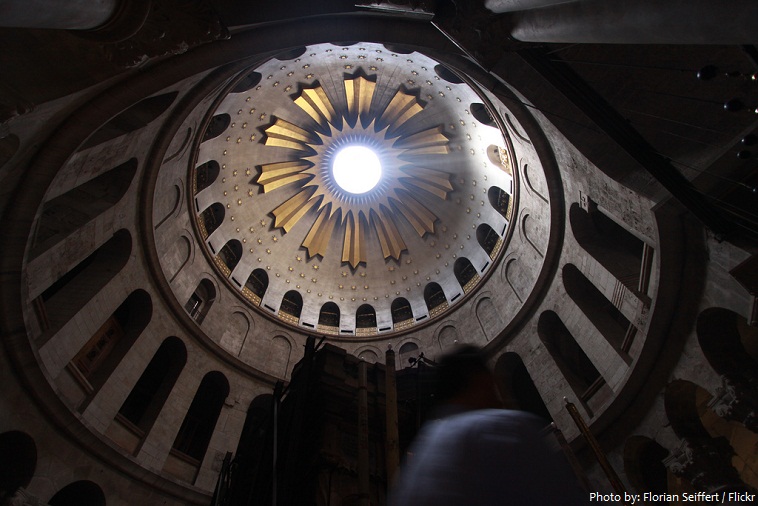 In the center of the Rotunda is the chapel called the Aedicule, which contains the Holy Sepulchre itself. 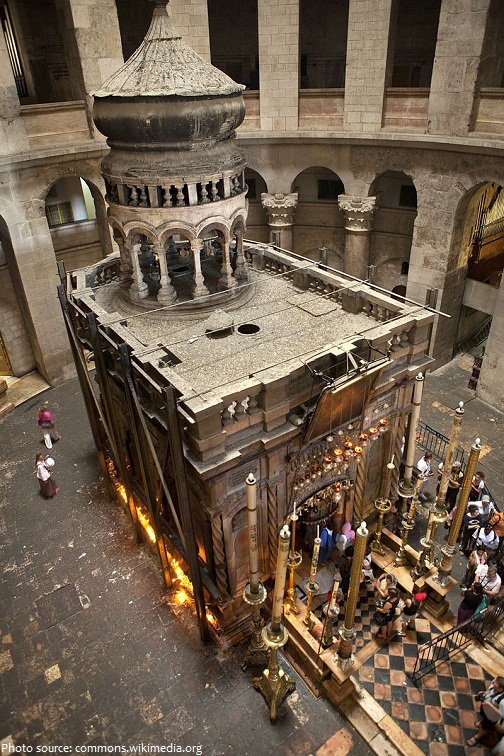 The Aedicule has two rooms, the first holding the Angel’s Stone, which is believed to be a fragment of the large stone that sealed the Tomb of Christ. 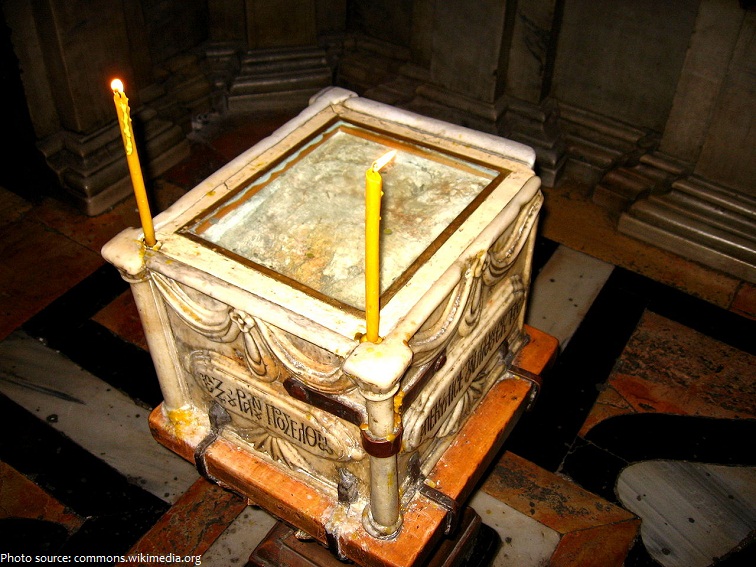 The second room in the Aedicule is the Tomb of Christ. Due to the fact that pilgrims lay their hands on the tomb, a marble plaque was placed in the fourteenth century on the tomb to prevent further damage to the tomb. 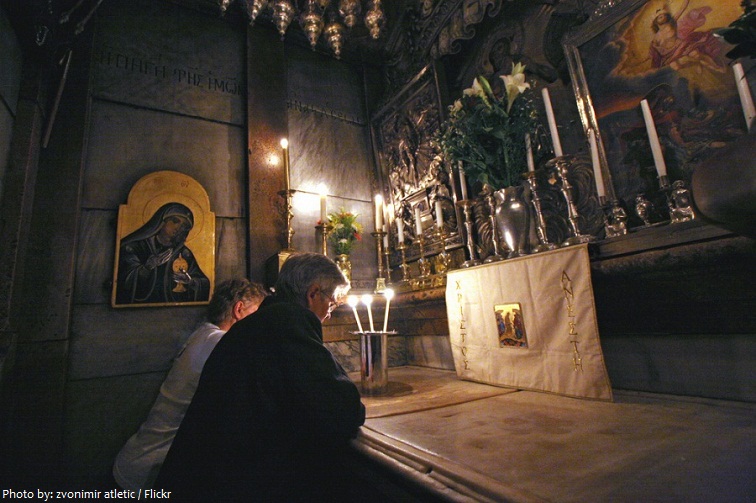 Just opposite the entrance to the Sepulchre is the large nave of the church, which has been enclosed by a wall on all sides. Known as the Catholicon, this Greek Orthodox cathedral features a large iconostasis flanked by the thrones of the Patriarchs of Jerusalem and Antioch. Above is a colorful cupola, which dates from after the 1927 earthquake, decorated with an image of Christ and other icons. 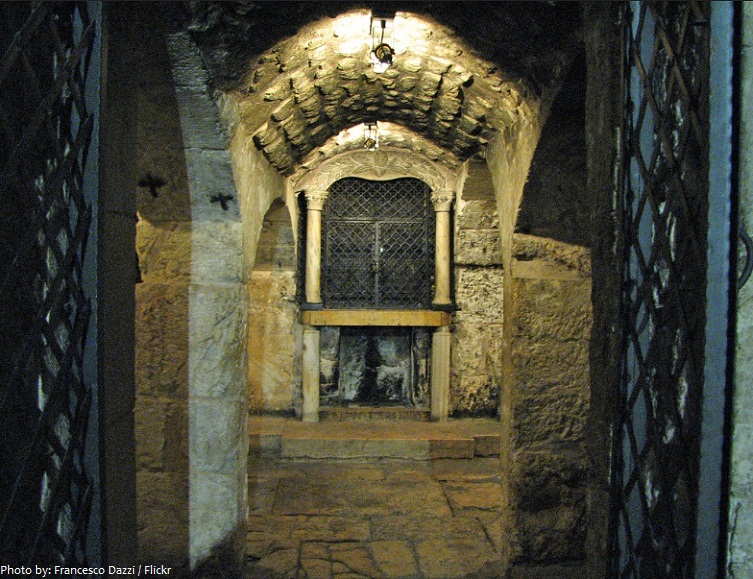 Taking a right at the Prison leads into the ambulatory of the Crusader church, which has three chapels located in three apses: the Greek Chapel of St. Longinus [pic. below] (the Roman soldier who pierced Jesus’ side and then converted) in the northeast corner; the Armenian Chapel of the Dividing of the Robes in the center; and the Greek Chapel of Derision or the Crowning of Thorns in the southeast apse. The latter contains a relic of the Column of Derision. 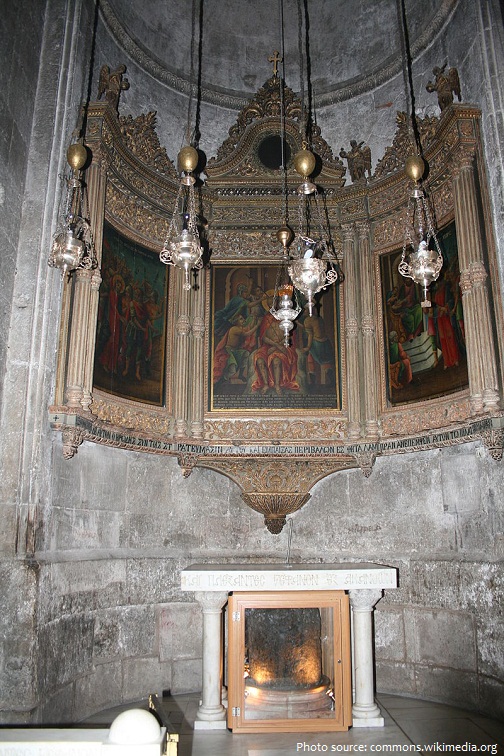 Between the last two chapels is a stairway that descends to the large Chapel of St. Helena, which is owned by the Armenians. In the south east of the chapel there is a chair which was reputed to be a seat that was sat in by Helena, the mother of the Emperor Constantine when she was looking for the True Cross. There are two apses in the church, one dedicated to Saint Helena and one to the penitent thief on the cross. The chapel is modestly adorned in memory of Saint Helena’s simplicity. 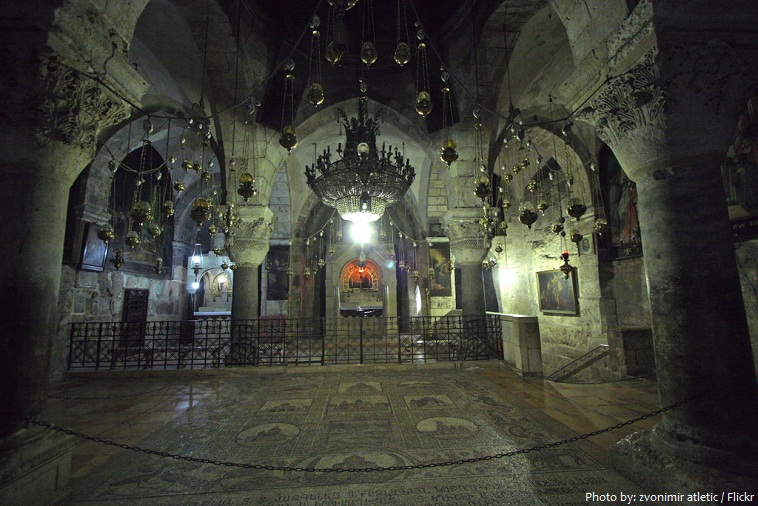 The church is a part of the UNESCO World Heritage Site Old City of Jerusalem. 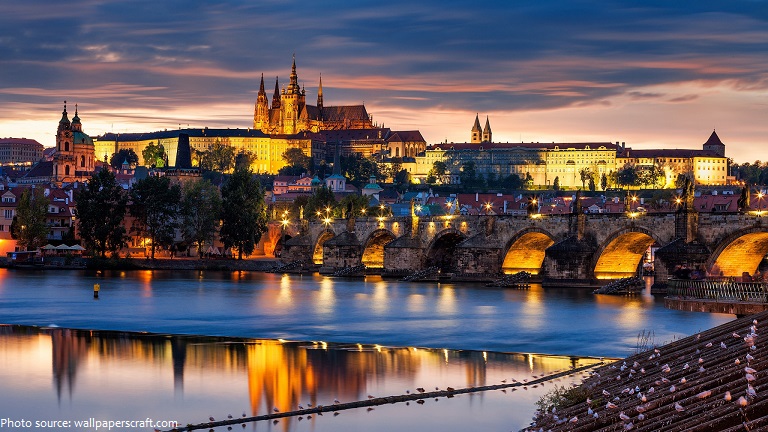 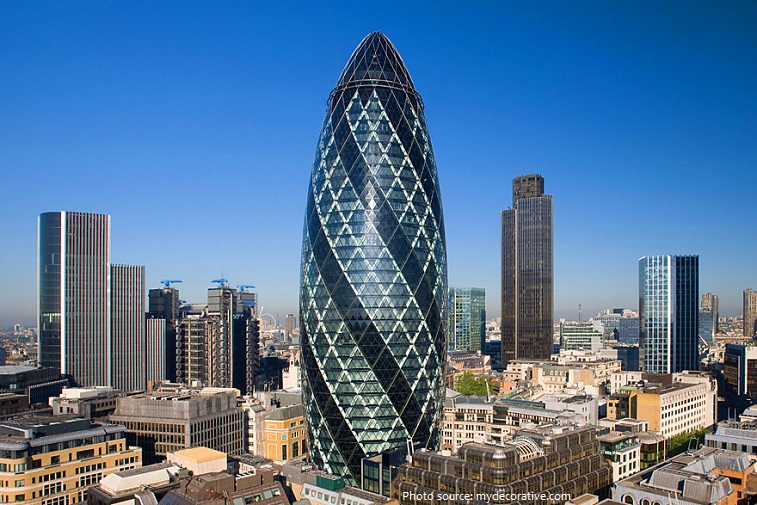 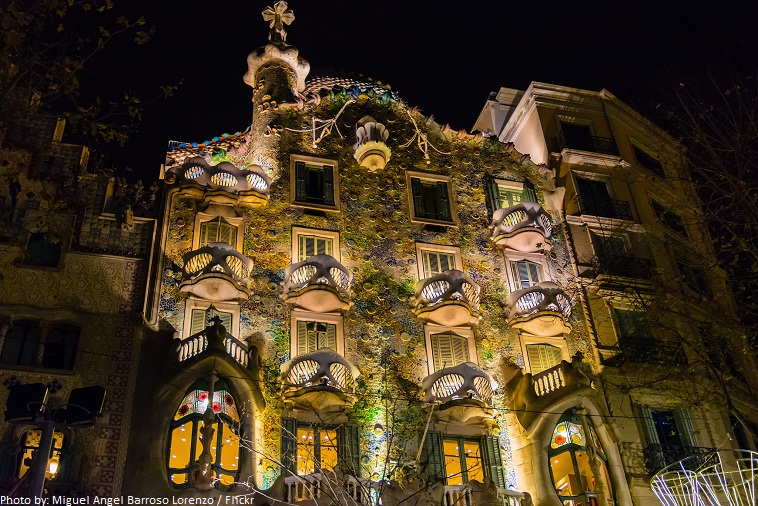 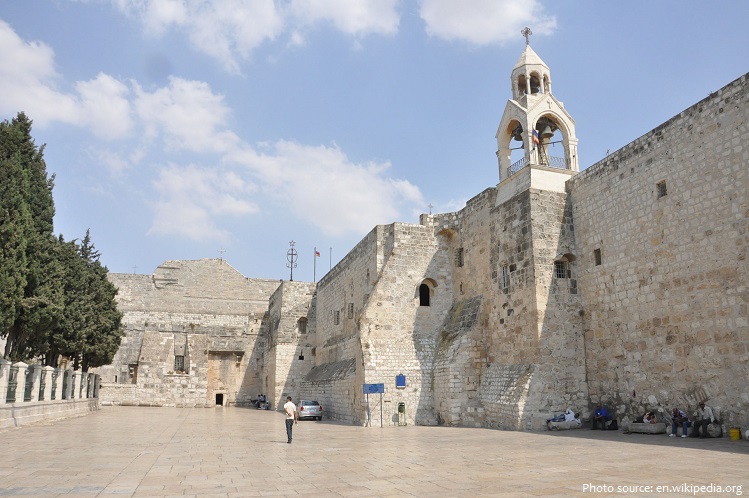