Swallows belong to the family Hirundininae which also includes martins.

There are around 83 species of swallows worldwide.

They are found around the world on all continents except Antarctica.

Swallows live in a wide range of habitats. They are dependent on flying insects and as these are common over waterways and lakes they will frequently feed over these, but they can be found in any open habitat including grasslands, open woodland, savanna, marshes, mangroves and scrubland, from sea level to high alpine areas.

The average lifespan is 3 years in the wild. 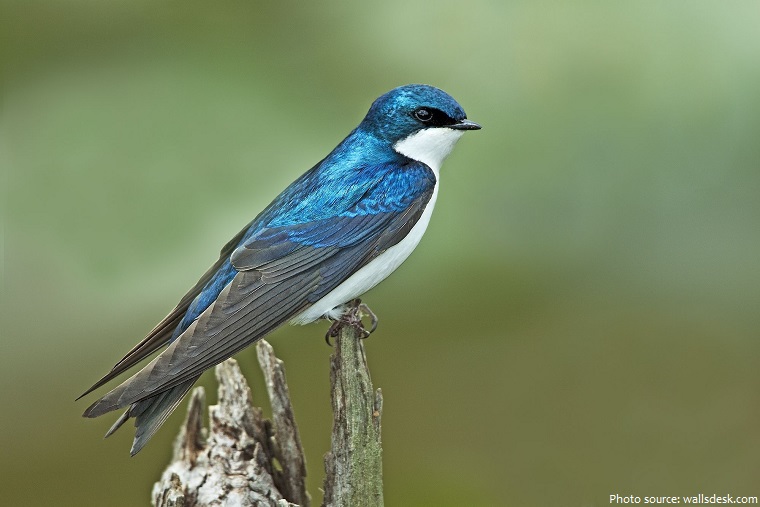 Swallows come in a variety of shapes, sizes and colors.

The most common swallow plumage is glossy dark blue or green above and plain or streaked underparts, often white or rufous.

Swallows have adapted to hunting insects on the wing by developing a slender, streamlined body and long pointed wings, which allow great maneuverability and endurance, as well as frequent periods of gliding. 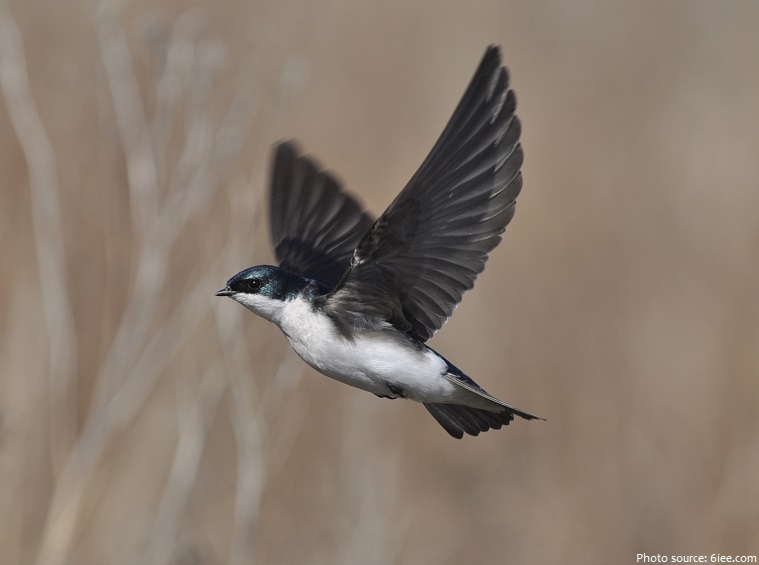 A long tail increases maneuverability, and may also function as a sexual adornment, since the tail is frequently longer in males.

The legs are short, and their feet are adapted for perching rather than walking, as the front toes are partially joined at the base.

Swallows are capable of walking and even running, but they do so with a shuffling, waddling gait.

They have short bills, but strong jaws and a wide gape.

For the most part swallows are insectivorous, taking flying insects on the wing. Across the whole family a wide range of insects are taken from most insect groups, but the composition of any one prey type in the diet varies by species and with the time of year. In addition to insect prey a number of species will occasionally consume fruits and other plant matter. 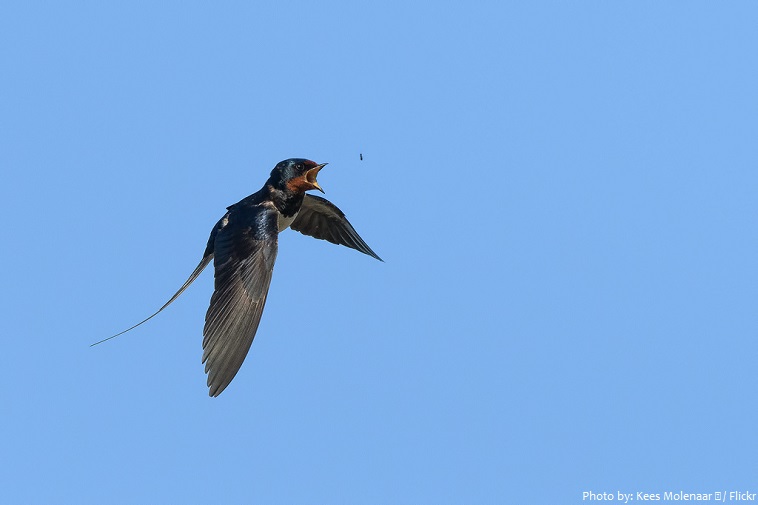 They avoid certain prey types; in particular stinging insects such as bees and wasps are generally avoided.

They always drink on the wing swooping low to sip the water.

Swallows are able to produce many different calls or songs, which are used to express excitement, to communicate with others of the same species, during courtship, or as an alarm when a predator is in the area. The typical song of swallows is a simple, sometimes musical twittering. A “tswit-tswit” call is given when a bird of prey is spotted. 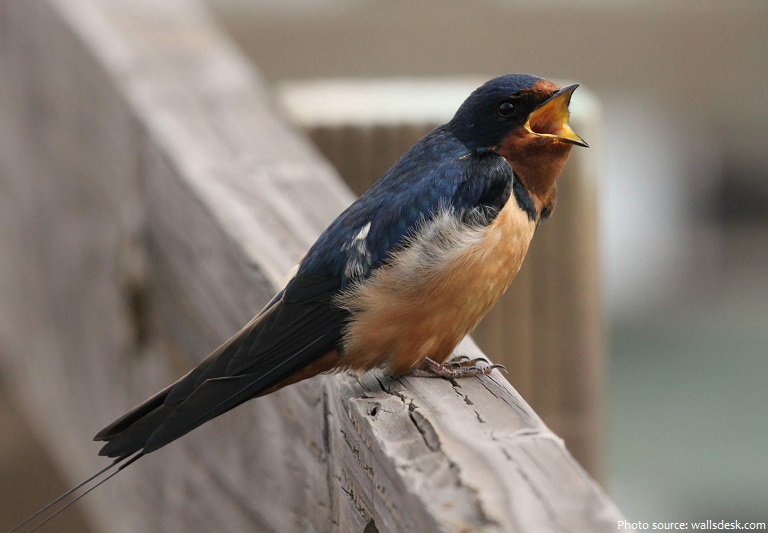 A number of European and North American species are long-distance migrants; by contrast, the West and South African swallows are non-migratory. 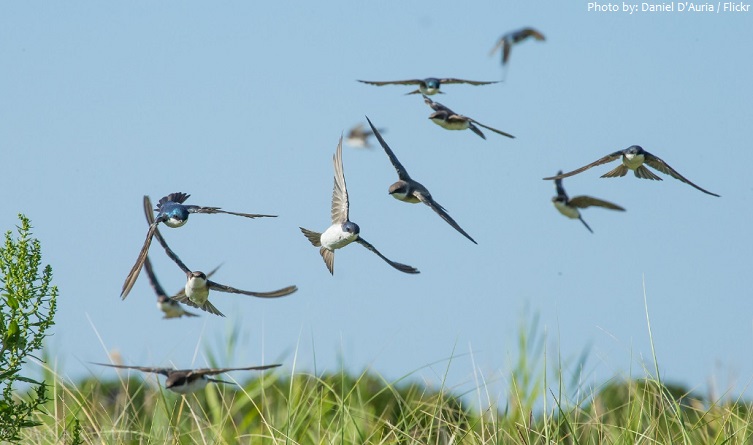 Some species, like the mangrove swallow, are territorial, whereas others are not and simply defend their nesting site.

The breeding of temperate species is seasonal, whereas that of subtropical or tropical species can either be continuous throughout the year or seasonal.

In general, the males select a nest site, and then attract a female using song and flight, and (dependent on the species) guard their territory. 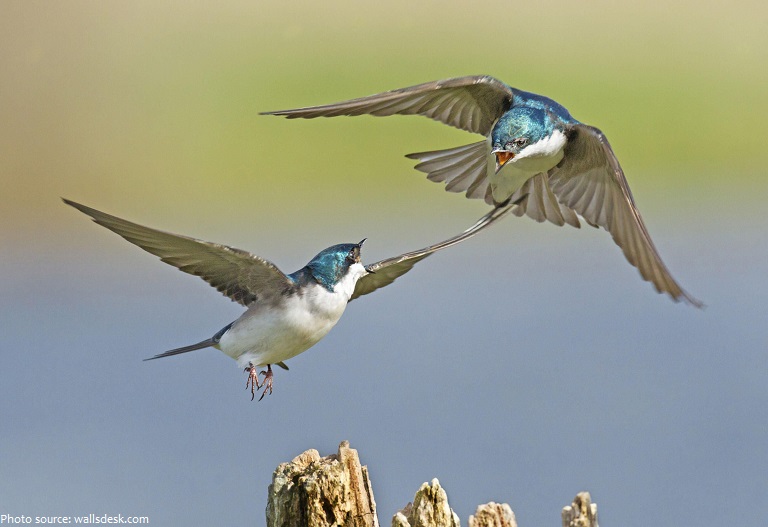 Some swallows make their nests in tree cavities or burrows, while others will create nests made of mud in sheltered locations like man-made structures.

The eggs of swallows tend to be white, although those of some mud-nesters are speckled. The average clutch size is around 4 to 5 eggs in temperate areas and 2 to 3 eggs in the tropics.

From laying, swallow eggs take between 10–21 days to hatch, with 14–18 days being more typical. The incubation duties are shared in some species, in others the eggs are incubated solely by the females.

The chicks hatch naked and with closed eyes. The eyes are closed and do not fully open for up to 10 days. The feathers take a few days to begin to sprout, and the chicks are brooded by the parents until they are able to thermoregulate. 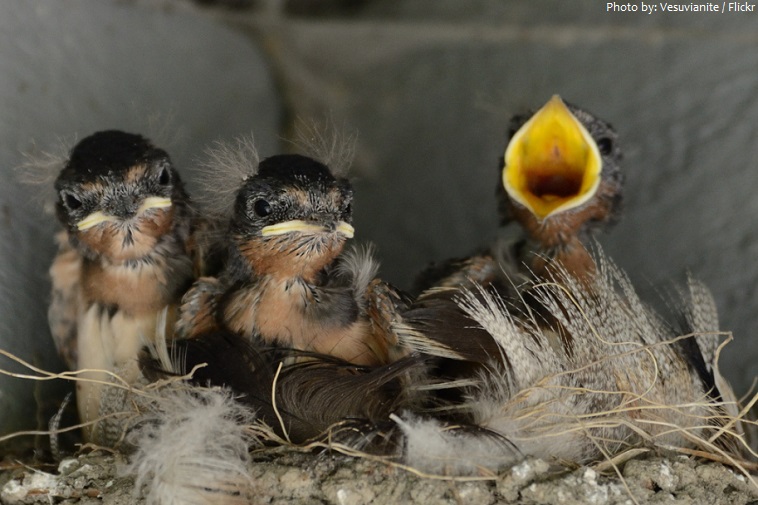 It is difficult to judge when swallows fledge, as they will be enticed out of the nest after 3 weeks by parents but frequently return to the nest afterwards in order to roost.

Outside the breeding season, some species may form large flocks, and species may also roost communally. This is thought to provide protection from predators such as sparrowhawks and hobbies.

These roosts can be enormous; one winter roosting site of barn swallows in Nigeria attracted 1.5 million individuals.

Non-social species do not form flocks, but recently fledged chicks may remain with their parents for a while after the breeding season.

Species of swallow that are threatened with extinction are generally endangered due to habitat loss.

The barn swallow (Hirundo rustica) is the most widespread species of swallow in the world.

The term Swallow is used colloquially in Europe as a synonym for the barn swallow.

Swallows and swifts are unrelated yet superficially very similar in appearance.

The swallow is called the “bird of freedom” because it cannot endure captivity and will only mate in the wild.