Still life is a depiction of inanimate objects for the sake of their qualities of form, colour, texture, and composition.

Although decorative fresco murals and mosaics with still-life subjects occasionally appeared in antiquity, it was not until the Renaissance that still life emerged as an independent painting genre, rather than existing primarily as a subsidiary element in a composition.

The term “still life” is derived from the Dutch word stilleven, which gained prominence during the 16th century. While it was during this time that the still life gained recognition as a genre, its roots date back to ancient times.

Most still lifes can be placed into one of four categories: flowers, banquet or breakfast, animal(s), and symbolic. While most of these types are self-explanatory—flower pieces tend to focus on bouquets or vases of full blooms and a banquet work features an array of food items—symbolic still lifes can vary greatly.

Still life occupied the lowest rung of the hierarchy of genres, but has been extremely popular with buyers. As well as the independent still-life subject, still-life painting encompasses other types of painting with prominent still-life elements, usually symbolic, and “images that rely on a multitude of still-life elements ostensibly to reproduce a ‘slice of life'”. The trompe-l’œil painting, which intends to deceive the viewer into thinking the scene is real, is a specialized type of still life, usually showing inanimate and relatively flat objects.

Still-life paintings often adorn the interior of ancient Egyptian tombs. It was believed that food objects and other items depicted there would, in the afterlife, become real and available for use by the deceased.

Ancient Greeks and Romans also created similar depictions of inanimate objects. While they mostly reserved still-life subject matter for mosaics, they also employed it for frescoes, like Still Life with Glass Bowl of Fruit and Vases, a 1st-century wall painting from Pompeii.

During the Middle Ages, artists adapted the still life for religious purposes. In addition to incorporating symbolic arrangements into depictions of Biblical scenes, they also used them to decorate illuminated manuscripts. Objects like coins, seashells, and bushels of fruit can be found in the borders of these books, including the elaborately decorated Hours of Catherine of Cleves from the 15th century.

By the 16th century, food and flowers would again appear as symbols of the seasons and of the five senses. Also starting in Roman times is the tradition of the use of the skull in paintings as a symbol of mortality and earthly remains, often with the accompanying phrase Omnia mors aequat (Death makes all equal). These vanitas images have been re-interpreted through the last 400 years of art history, starting with Dutch painters around 1600.

The development of oil painting technique by Jan van Eyck and other Northern European artists made it possible to paint everyday objects in this hyper-realistic fashion, owing to the slow drying, mixing, and layering qualities of oil colours. Among the first to break free of religious meaning were Leonardo da Vinci, who created watercolour studies of fruit (around 1495) as part of his restless examination of nature, and Albrecht Dürer who also made precise coloured drawings of flora and fauna.

Dutch Golden Age artists took this interest in detailed floral art a step further with their vanitas paintings. Vanitas paintings are inspired by memento mori, a genre of painting whose Latin name translates to “remember that you have to die.” Like memento mori depictions, these pieces often pair cut flowers with objects like human skulls, waning candles, and overturned hourglasses to comment on the fleeting nature of life.

By the 19th century, artists became less concerned with producing hyperrealist still life paintings. Instead, they turned to experimentation with color, shapes, and textures.

Still life made its major modern art debut during the post-impressionist period when Van Gogh produced a series of famous still life paintings—Sunflowers. He forwent realism in favor of bold color, large, dynamic, thick brush strokes to recreate the three-dimensional textures of the sunflowers he was painting. This technique creates a visible texture on the surface of the canvas called impasto.

Today, many artists put a contemporary twist on the timeless tradition by painting still lifes of modern-day food and objects in a hyperrealistic style. Much like the pieces that inspire them, these high-definition paintings prove that even the most mundane objects can be made into masterpieces. 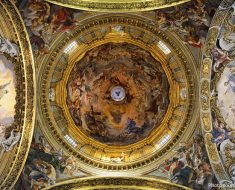