They may be large or small, eaten as snack food or as part of a meal, their fillings differing from region to region.

However, all spring rolls share some characteristics: wafer-thin wrappers encasing a delectable filling, each one, whether large or small, being rolled up and deep-fried until crisp and golden.

Spring rolls are usually served with a dipping sauce, which again varies from region to region. 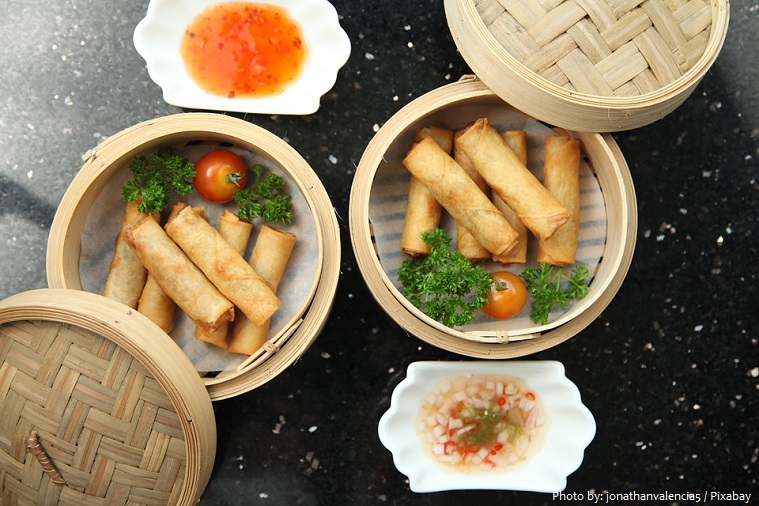 It is believed that spring rolls originated from China.

They are usually eaten during Chinese New Year also called the Spring Festival in mainland China, hence the name.

Eating spring rolls is a way to welcome the arrival of spring. The golden cylindrical-shaped rolls represent gold bars — which symbolize wealth.

In Chinese cuisine, spring rolls are savoury rolls with cabbage and other vegetable fillings inside a thinly wrapped cylindrical pastry. The origin of spring rolls dates way back to the Eastern Jin dynasty which lasted from 265 AD to 420 AD. At that time everyone made a kind of thin pancake with flour on the day of ‘the Beginning of Spring’.

In the Ming and Qing dynasties (1367 AD – 1911 AD), with the development of cookery skills, cooks rolled the traditional pancakes into mignon spring rolls. They were not only well-liked by common folk, but were also famous in the palace.

Since than, spring rolls have become hugely popular around the world. The longest spring roll measured 500 m (1,640 ft 5 in) and was made in an event organised by APOT. Asia (Australia), in Da Nang, Vietnam, on 5 June 2014. 500 individuals participated in the preparation of the spring roll.

The most people making spring rolls simultaneously is 327 and was achieved by Team Ross (USA), in Tyler, Texas, on 2 September 2012. The spring rolls made were Filipino ‘lumpia’ and each contained ground pork, dried onions, dried garlic, dried red pepper and salt.