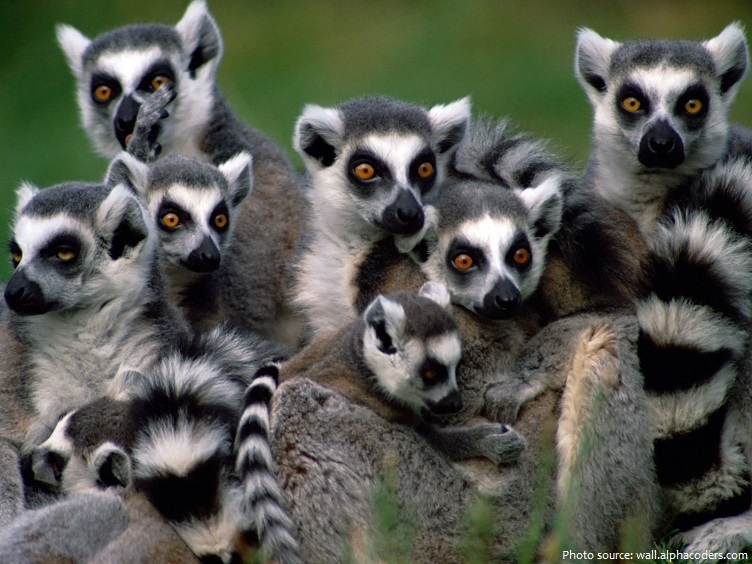 The ring-tailed lemur is the most recognizable lemur species.

Like all lemurs it is endemic to the island of Madagascar.

It is found in southern and southwestern Madagascar, the ring-tailed lemur ranges further into highland areas than other lemurs.

The ring-tailed lemur inhabits deciduous forests, dry scrub, montane humid forests, and gallery forests (forests along riverbanks). It strongly favors gallery forests, but such forests have now been cleared from much of Madagascar in order to create pasture for livestock. 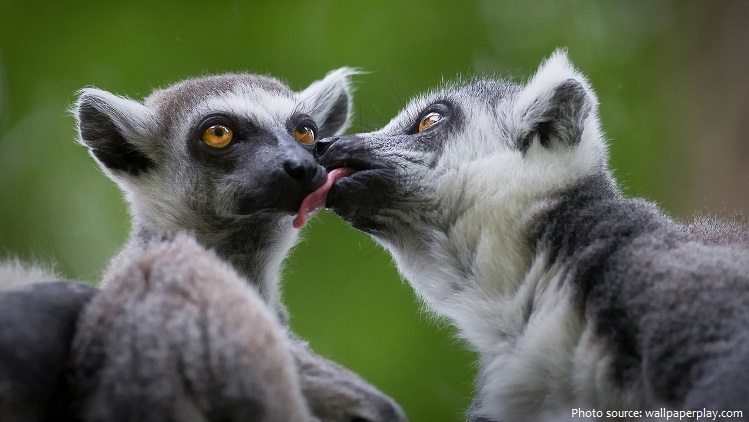 The lifespan for ring-tailed lemurs is from 16 to 19 years in the wild, and up to 27 in captivity.

The species has a slender frame and narrow face, fox-like muzzle. The ring-tailed lemur’s trademark—a long, bushy tail—is ringed in alternating black and white transverse stripes, numbering 12 or 13 white rings and 13 or 14 black rings, and always ending in a black tip. 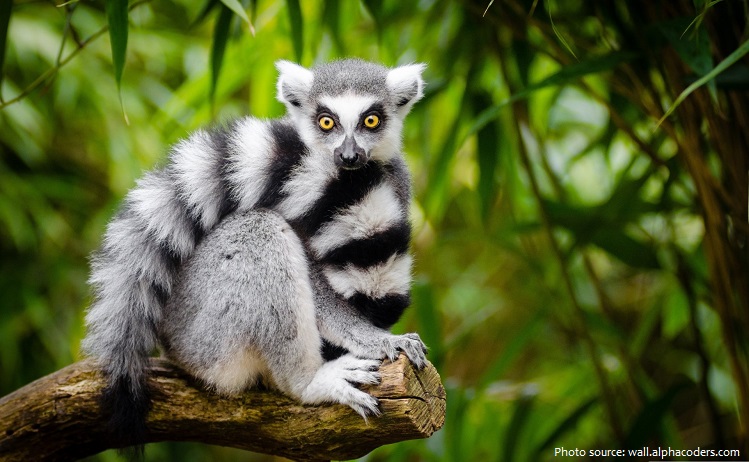 This species of lemur is is diurnal, being active exclusively in daylight hours.

The ring-tailed lemur is an opportunistic omnivore primarily eating fruits and leaves, particularly those of the tamarind tree, known natively as kily. When available, tamarind makes up as much as 50% of the diet, especially during the dry, winter season. The ring-tailed lemur eats from as many as three dozen different plant species, and its diet includes flowers, herbs, bark and sap. It also eat spiders, spider webs, chameleons, caterpillars, small birds, and termite mounds.

The ring-tailed lemur is semi-terrestrial. It is the most terrestrial of lemur species, spending as much as 33% of its time on the ground. 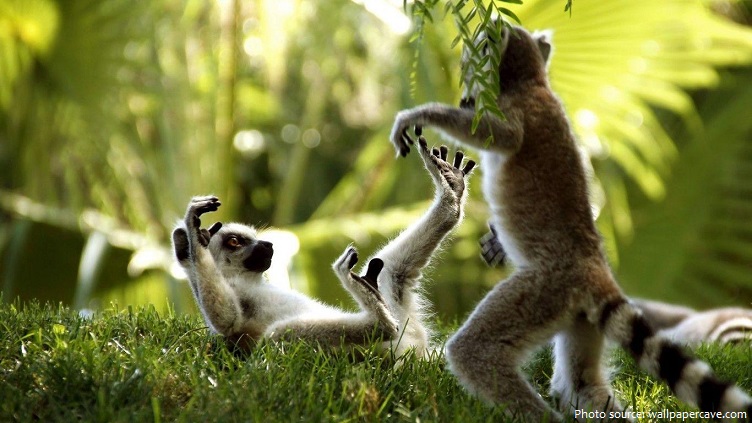 Ring-tailed lemurs live in groups called troops. Troops typically range in size from 6 to 25, although troops with over 30 individuals have been recorded. The average troop contains 13 to 15 individuals. Like most lemur species, females are dominant to males.

In the mornings the ring-tailed lemur sunbathes to warm itself. It faces the sun sitting in what is frequently described as a lotus position. However, it sits with its legs extended outward, not cross-legged, and will often support itself on nearby branches. Sunning is often a group activity, particularly during the cold mornings. At night, troops will split into sleeping parties huddling closely together to keep warm. 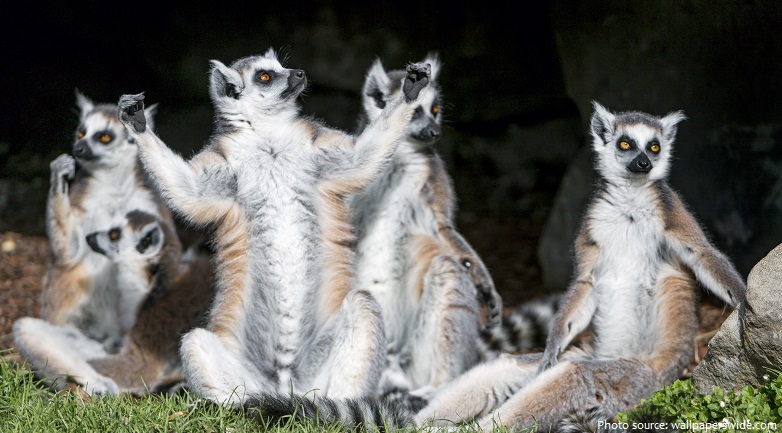 As one of the most vocal primates, the ring-tailed lemur uses numerous vocalizations including group cohesion and alarm calls.

Home range size varies between 6 and 35 hectares (15 and 86 acres). Troops of the ring-tailed lemur will maintain a territory, but overlap is often high.

Ring-tailed lemurs begin mating in April, with a gestation period of 130 to 144 days, giving birth beginning in August and finishing in September. Females typically give birth to one or two offspring, more commonly females will only have one.

Offspring are completely cared for by the mother. Newborns spend their first two weeks of life riding on the underbellies of their mothers. After the first two weeks the young ride on the backs of their mothers and begin to explore their surroundings. The young are weaned starting at eight weeks of age, until they are fully weaned at five months, all nutrition is obtained from the mother. 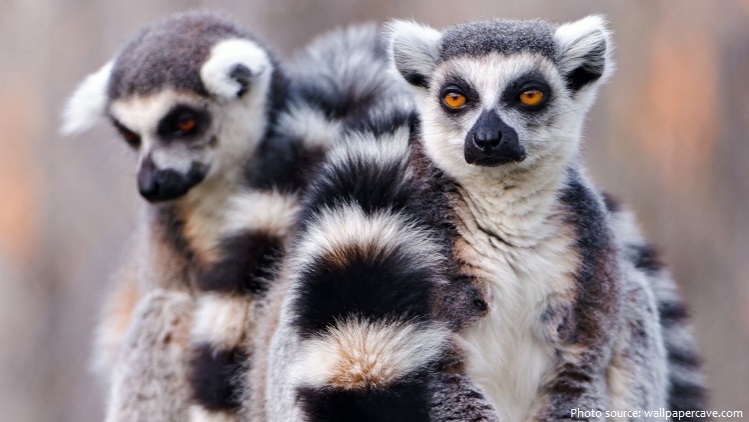 Despite reproducing readily in captivity and being the most populous lemur in zoos worldwide, numbering more than 2,000 individuals, the ring-tailed lemur is listed as endangered by the IUCN Red List due to habitat destruction and hunting for bush meat and the exotic pet trade.

The name derives from the Latin term lemures, which refers to specters or ghosts that were exorcised during the Lemuria festival of ancient Rome. Although the term “lemur” was first intended for slender lorises, because of the nocturnal activity and slow movements of this animal. However, it was soon limited to the endemic Malagasy primates, which have been known as “lemurs” ever since.

The ring-tailed lemur is known locally in Malagasy as maky or hira. 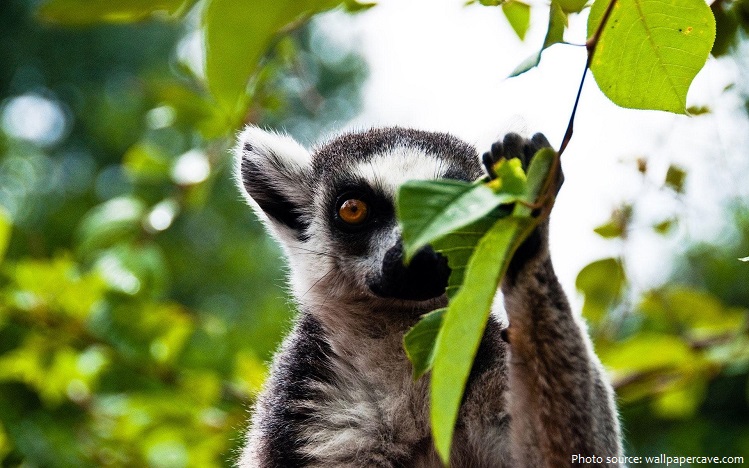 The first mention of the ring-tailed lemur in Western literature came in 1625 when English traveler and writer Samuel Purchas described them as being comparable in size to a monkey and having a fox-like long tail with black and white rings.

Being the most widely recognized endemic primate on the island, it has been selected as the symbol for Madagascar National Parks.

It has been popularized in Western culture by the Animal Planet television series Lemur Street, as well as by the character King Julien in the animated Madagascar film and TV franchise.