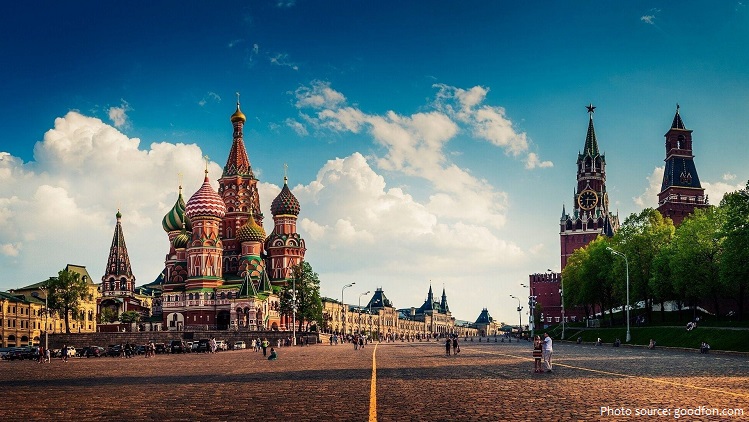 Red Square is one of the oldest and largest squares in Moscow.

It is located in Moscow’s historic centre, in the eastern walls of the Kremlin.

In 1990, UNESCO designated Red Square as one of its World Heritage sites.

Dating from the late 15th century, just after the Kremlin walls were completed, Red Square has long been a focal point in the social and political history of Russia and the former Soviet Union.

Red Square was considered a sacred place. Various festive processions were held there, and during Palm Sunday, the famous “procession on a donkey” was arranged, in which the patriarch, sitting on a donkey, accompanied by the tsar and the people went out of Saint Basil’s Cathedral in the Kremlin.

Contrary to popular misconception, Red Square’s name is completely unrelated to the crimson color of its numerous buildings as well as to the Communist Party’s association with the color red. In its earliest incarnation, Red Square was known as Trinity Square, in honor of Trinity Cathedral, which stood on its southern end during the rule of Ivan III. From the 17th century onward, however, Russians began calling the square by its current name, “Krasnaya Ploschad.” The name is derived from the word krasnyi, which meant beautiful in Old Russian and only later came to mean red.

Red Square, which is one of the most visited squares in the world, contains some extremely interesting monuments.

The most important is the magnificent St. Basil’s Cathedral, built before the square even existed. It was built to commemorate Ivan the Terrible’s (1532–1584) – conquest ofboth Kazan and Astrakhan. According to legend, the builder of Saint Basil’s Cathedral was blinded so that such a beautiful structure could never be built again.

In this enormous open space you’ll also find the State Historical Museum, a red brick building that is reminiscent of a typical Russian building from the 1500s, but built towards the end of the 1800s at the request of Tsar Alexander II, who wanted to erect a building that would match the style of the Kremlin.

The most important Soviet monument in the square is without a doubt Lenin’s Mausoleum. It serves as the resting place of Soviet leader Vladimir Lenin. His preserved body has been on public display there since shortly after his death in 1924, with rare exceptions in wartime. Alexey Shchusev’s diminutive but monumental granite structure incorporates some elements from ancient mausoleums, such as the Step Pyramid, the Tomb of Cyrus the Great and, to some degree, the Temple of the Inscriptions.

The Kazan Cathedral is to the right of the former government administration building, on the corner of Red Square and Nikolskaya Street. Today’s cathedral is a replica from 1993 – originally there was a church
at this site since the 1620s, initially a wooden one, then a stone one from 1636 onwards.

The GUM Department Store, built in Soviet times and now privatized, was the most important shopping center in the whole country for decades, and serves as a reminder that the square was originally built as a market place.

In 1930 the cobblestone paving of Red Square was replaced with granite paving stones, and a monument to Kuzma Minin and Prince Dmitry Pozharsky (leaders of the army that forced the surrender of Polish invaders in 1612) was moved from the centre of the square to its present location in front of St. Basil’s in order to facilitate parades and demonstrations.

An incredible event happened on Red Square in 1987. An amateur German aviator, Mathias Rust, illegally landed near Red Square – how a 19-year old boy managed to break through the Soviet defense system remains a mystery. Rust’s successful flight was a sign that the old Soviet system was not as powerful – it was followed by Mikhail Gorbachev’s reforms and helped to bring an end to the Cold War.

During the Soviet era the annual May Day and October Revolution (November 7 Day) military parades were probably the best-known celebrations held in Red Square. Although they were discontinued after the
collapse of the Soviet Union in 1991, they were revived in 2008 by Pres. Vladimir Putin.

During the winter holidays, Red Square becomes the most magical place in Moscow. Especially in the evening, when the lights are on! The Christmas market in Moscow is undoubtedly among the most beautiful ones in the world.