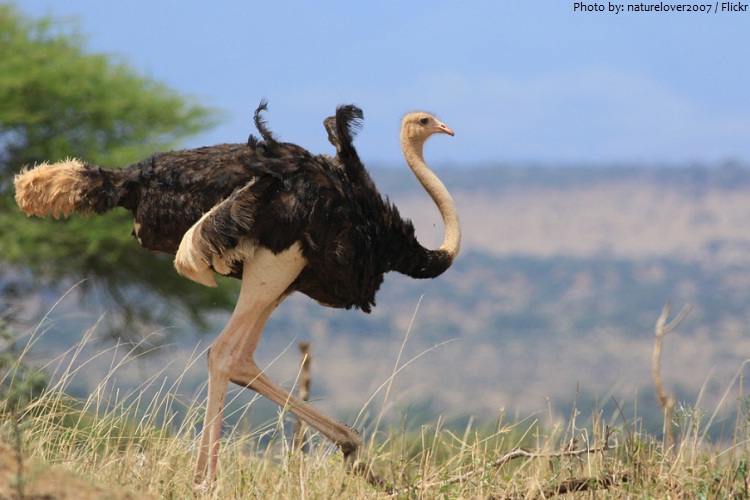 Ostriches are large, flightless birds that have long legs and a long neck that protrudes from a round body.

The ostrich is the largest and heaviest living bird.

Native to Africa, ostriches are found in savanna and desert regions, were they graze among giraffes, zebras, wildebeest, and gazelles.

Besides in their natural environment, ostriches are often breed as farm animals because some people like to eat their meat, eggs or to wear fashion products made of their skin.

Ostriches have a lifespan of 30 to 40 years in the wild and in captivity up to 75 years with around 50 years being typical. 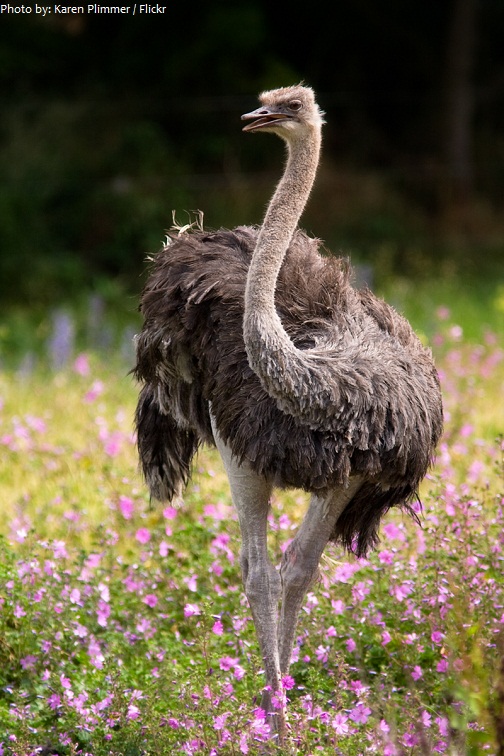 As it is so heavy, this flightless bird that can never take to the skies; instead, it’s built to run. 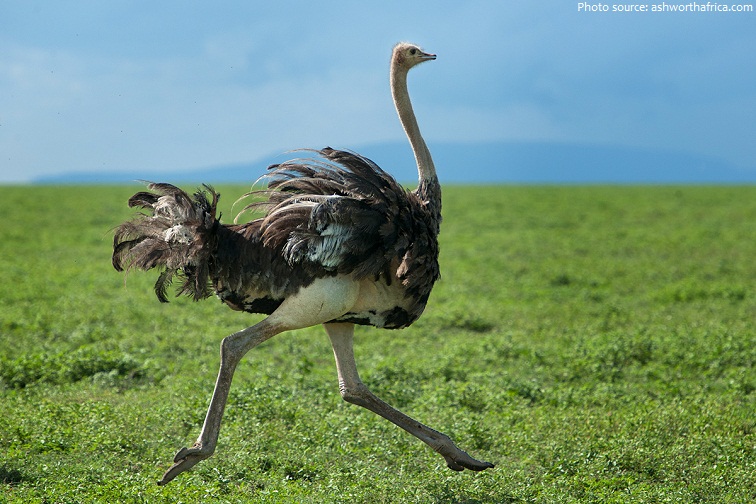 They may use their wings as “rudders” to help them change direction while running.

An ostrich’s powerful, long legs can cover 3 to 5 meters (10 to 16 feet) in a single stride. These legs can also be used for self-defense. An ostrich will kick with a force mighty enough to kill a lion.

The bird has just two toes on each foot (most birds have four), with the nail on the larger, inner toe resembling a hoof. The outer toe has no nail. The reduced number of toes is an adaptation that appears to aid in running, useful for getting away from predators. 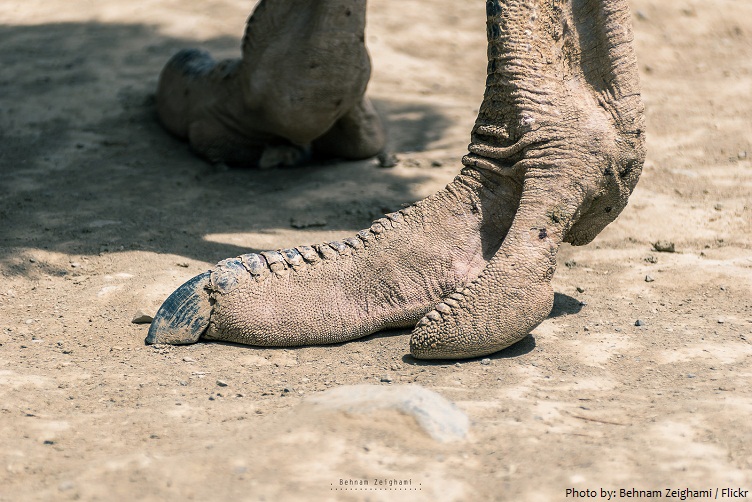 Their eyes are said to be the largest of any land vertebrate: 5 centimeters (2.0 in) in diameter. Its eye is bigger than its brain. 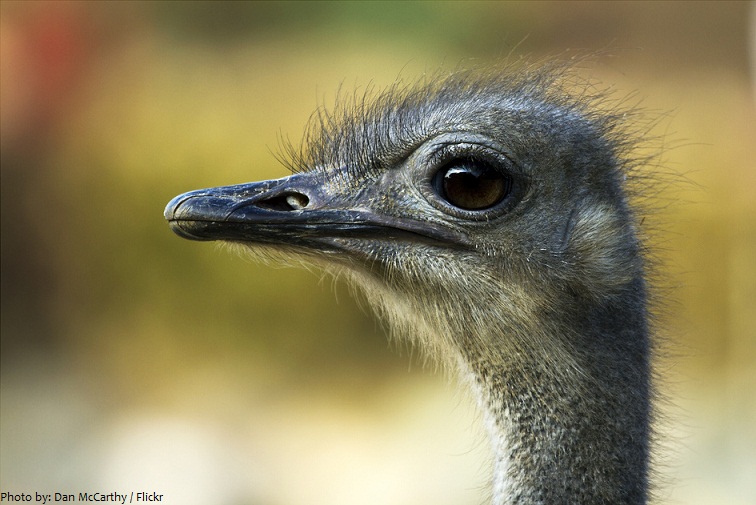 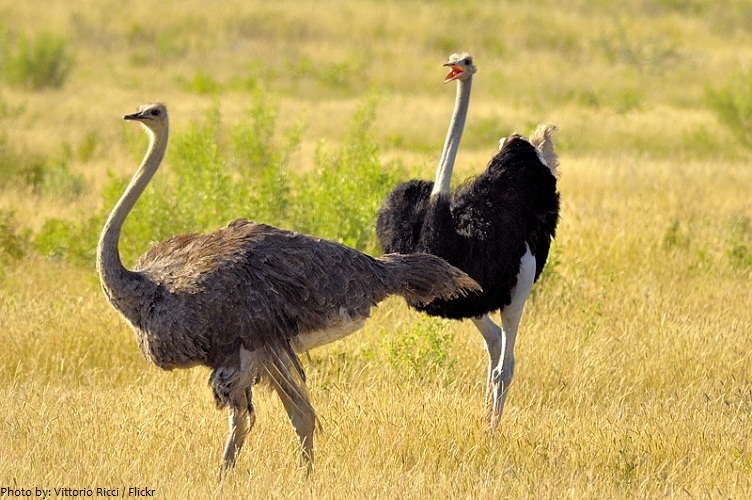 The feathers lack the tiny hooks that lock together the smooth external feathers of flying birds, and so are soft and fluffy and serve as insulation.

The wings reach a span of about 2 meters (6 ft 7 in). Their main use along with the tail feathers, is for displays and courtship. To show dominance, an ostrich holds its head up high and lifts its wings and tail feathers; to show submission, the head, wings, and tail droop down.

Ostriches are omnivores, which means they eat both vegetation and meat. They mostly eat plants, especially roots, leaves, and seeds, but they also munch on insects, snakes, lizards, or rodents that come within reach. 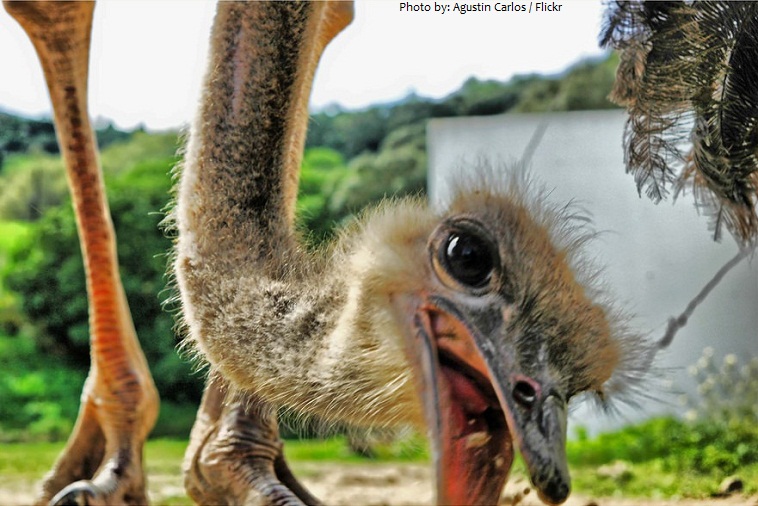 Ostriches are diurnal, but may be active on moonlit nights.

Ostriches live in groups, which helps with defense. With their long necks and keen vision, they can see for great distances, so in a group at least one of them is likely to notice danger approaching.

Ostriches sometimes gather in a large flock of 100 or more, but most flocks are smaller, usually about 10 birds. The group has a dominant male and a dominant female called the “main hen”, and several other females. Lone males come and go during mating season. 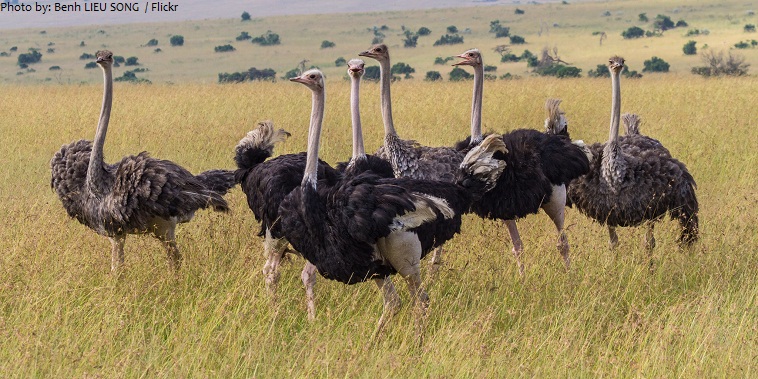 During courtship, the black-and-white male uses his dramatic coloring to attract the light brown female. He sinks slowly to the ground, almost like he’s bowing, and begins to wave and shake the feathers of first one wing and then the other while moving his tail up and down. He then gets up and moves toward the female, holding his wings out and stamping as he goes to impress her. If she approves, she mates with him. 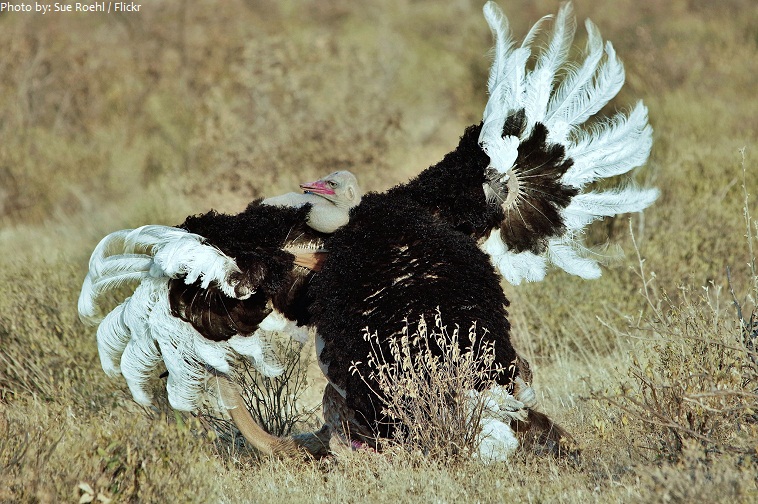 The dominant or “alpha” hen mates with the territorial male. The other females may mate with that male or other wandering males. All of the herd’s hens place their eggs in a communal nest called a dump nest, which can hold about 60 eggs at one time. A hen lays 7 to 10 eggs at a time. The main hen puts her eggs in the center of the nest to make sure they have the best chance of hatching, but many of the other eggs may also be incubated. Males, as well as females, sit on the eggs until they hatch, which can take 42 to 46 days. 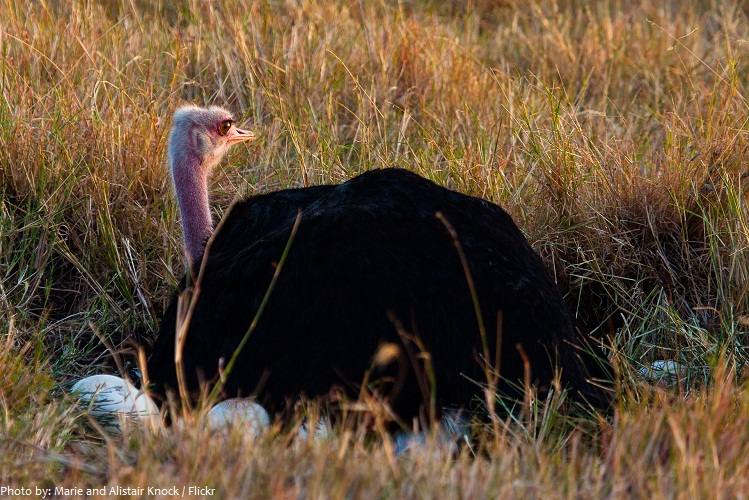 The giant eggs are the largest of any living bird at 15 centimeters long and weighing as much as 24 chicken eggs, though they are actually small in relation to the size of the adult.

Newly hatched chicks are about the size of barnyard chickens, but they grow at a rate of 30 centimeters (1 foot) per month, and by 6 months of age they are nearly as large as their parents. 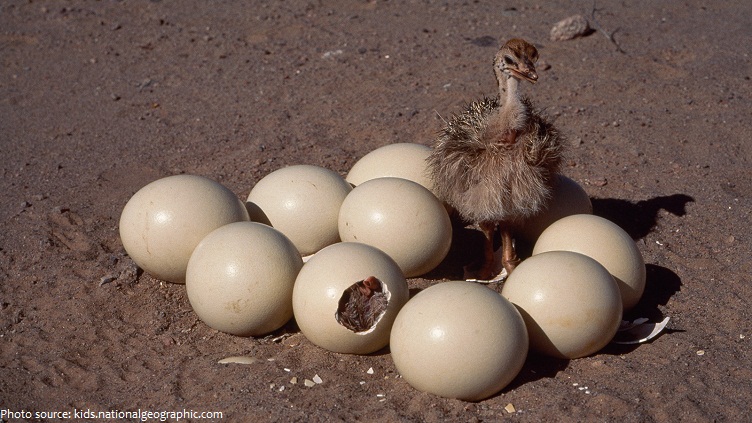 A few days after the chicks hatch, they leave the nest to travel with their parents. The adults shelter them under their wings to protect them from sun and rain. 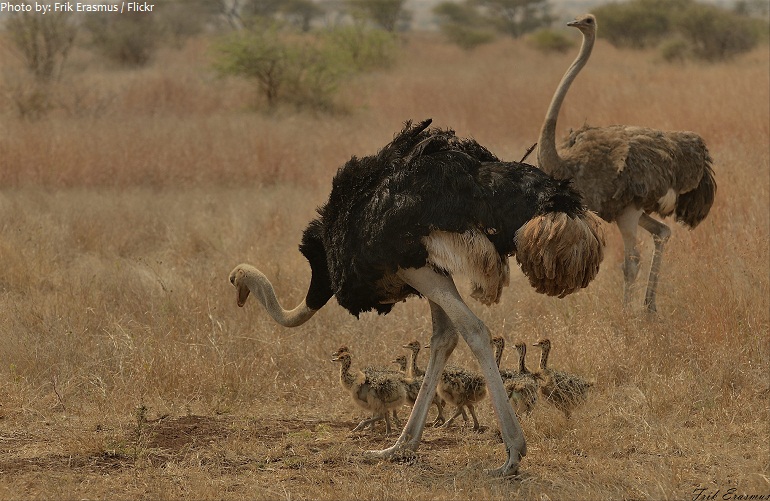 As a flightless species in the rich biozone of the African savanna, the ostrich must face a variety of formidable predators throughout its life cycle. Animals that prey on ostriches of all ages may include cheetahs, lions, leopards, African hunting dogs, and spotted hyenas.

Contrary to popular belief, ostriches do not bury their heads in the sand. The old saw probably originates with one of the bird’s defensive behaviors. At the approach of trouble, ostriches will lie low and press their long necks to the ground in an attempt to become less visible. Their plumage blends well with sandy soil and, from a distance, gives the appearance that they have buried their heads in the sand. 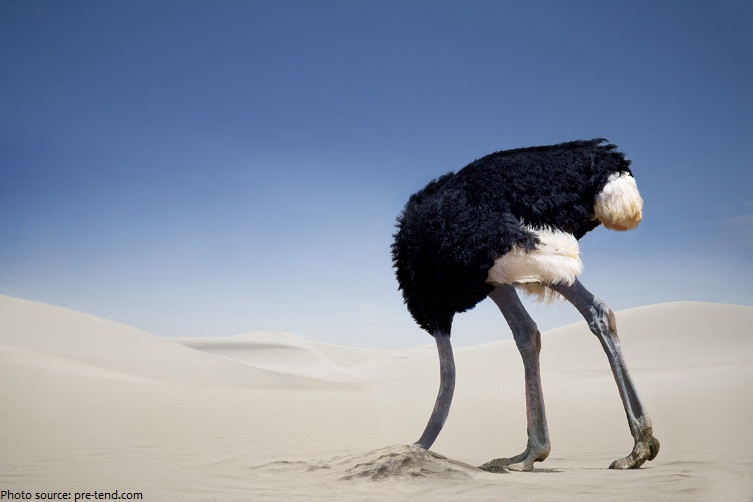 As its species name, camelus, suggests, the ostrich was once known as the “camel bird” because of its long neck, prominent eyes, and sweeping eyelashes, as well as its jolting walk. Also, like camels, the ostrich can tolerate high temperatures and go without water for long periods of time.

When family groups of ostriches meet, they may challenge each other with short chases, and then the winning adult pair takes all the chicks with them. Some of these “nurseries” can end up with 300 chicks and only a couple of adults to mind them.

They once roamed all over Asia, Africa and the Arabian Peninsula, but because they have been hunted so extensively, wild ostriches’ range has been reduced to sub-Saharan Africa.

Ostriches have inspired cultures and civilizations for 5,000 years in Mesopotamia and Egypt.

In some countries, people race each other on the backs of ostriches. The practice is common in Africa and is relatively unusual elsewhere.

Ostriches are attracted to small, shiny objects and peck curiously at them. 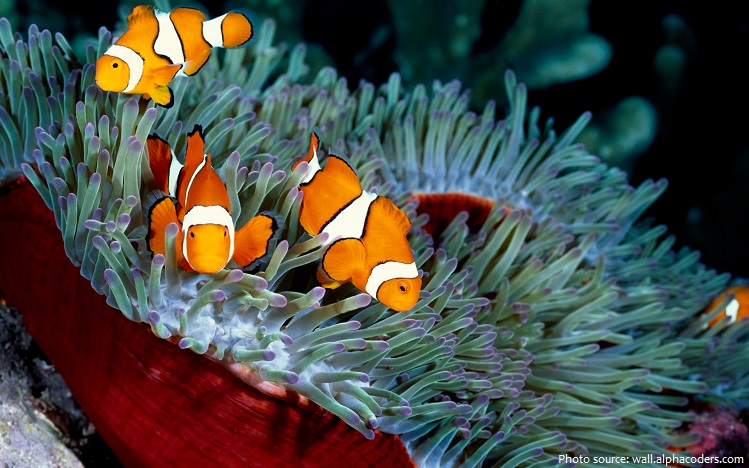 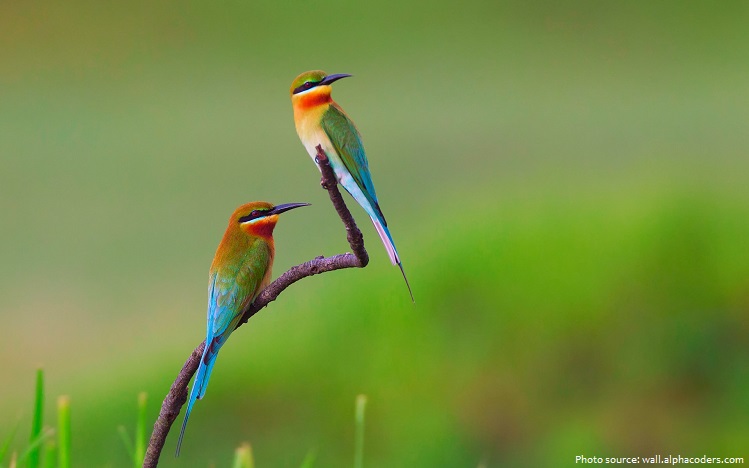 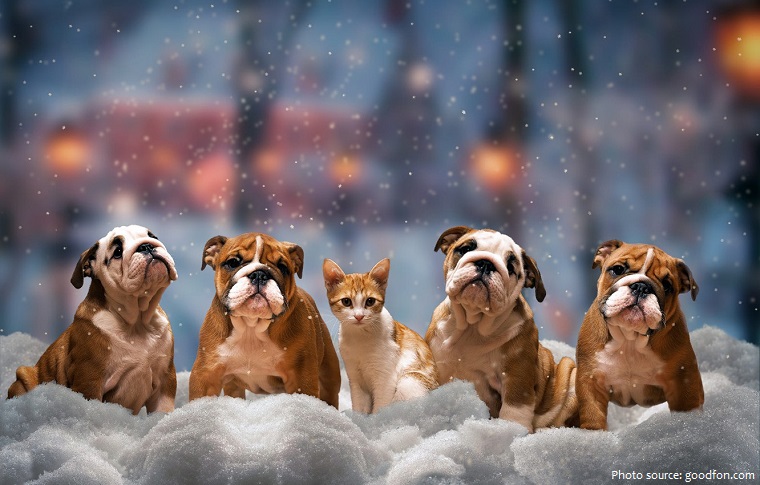 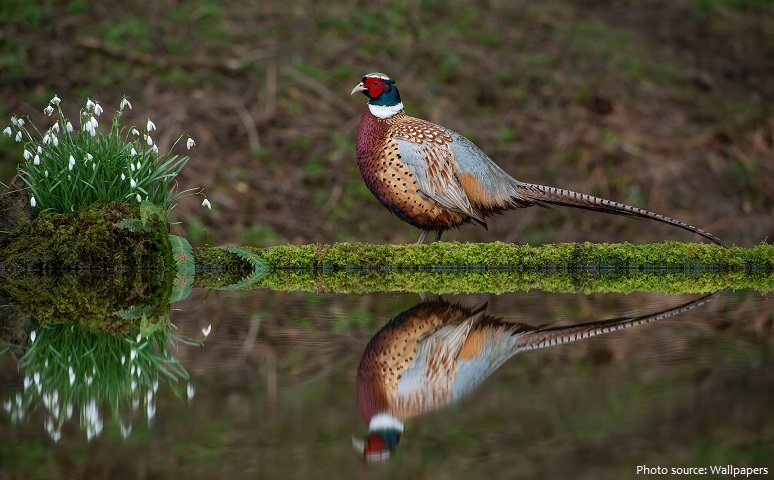 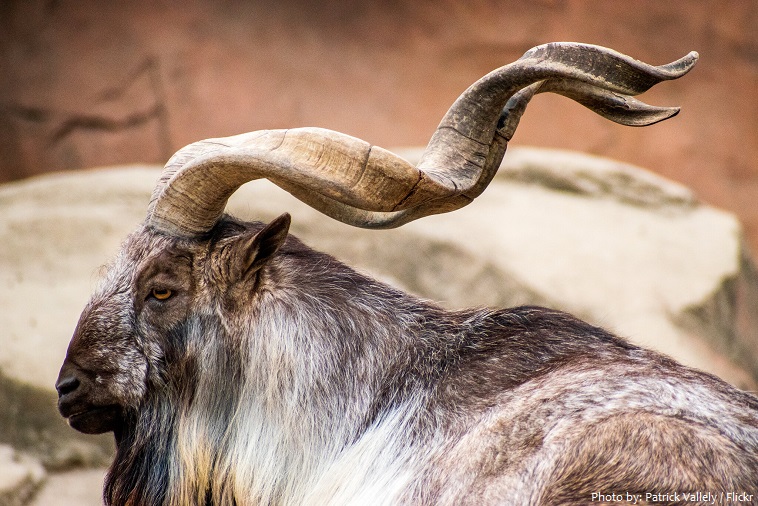