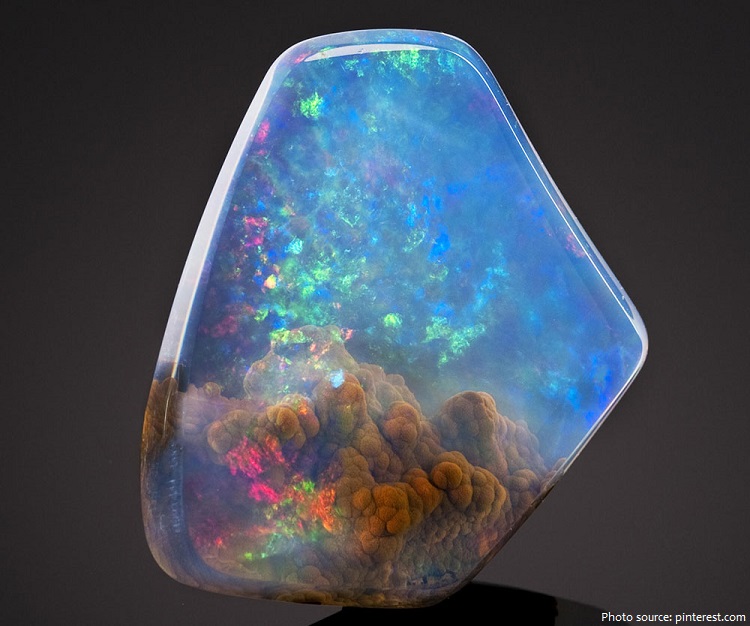 Opal is one of the most beautiful and precious gemstones.

Basically, opal is made up of water and silica (the main component in glass).

It is one of only six types of precious gemstones found on planet earth, sharing prestigious company with diamonds, rubies, sapphires, emeralds, and pearls.

Occurring in most varieties of rock, the vast majority of opals are mined in Australia (about 95%), with other opal digs occurring in the United States, Mexico, Peru, and Brazil. 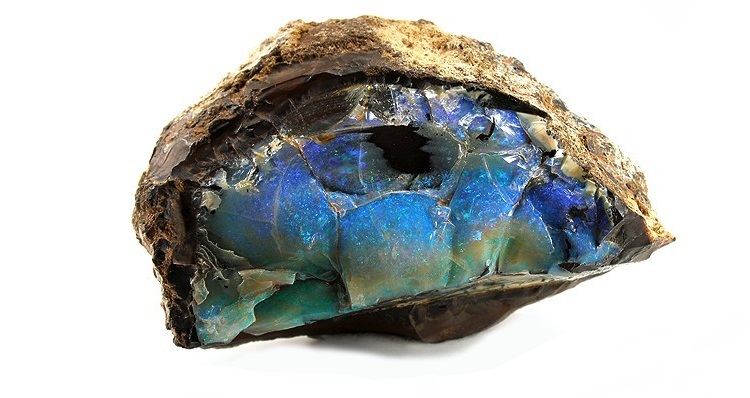 Opal tends to be found near the earth’s surface in areas where ancient geothermal hot springs once flowed.

The internal structure of precious opal causes it to diffract light, resulting in play-of-color.

Play-of-color is defined as “a pseudochromatic optical effect resulting in flashes of colored light from certain minerals, as they are turned in white light.”

Depending on the conditions in which it formed, opal may be transparent, translucent or opaque and the background color may be white, black or nearly any color of the visual spectrum. Black opal is considered to be the rarest, whereas white, gray and green are the most common. 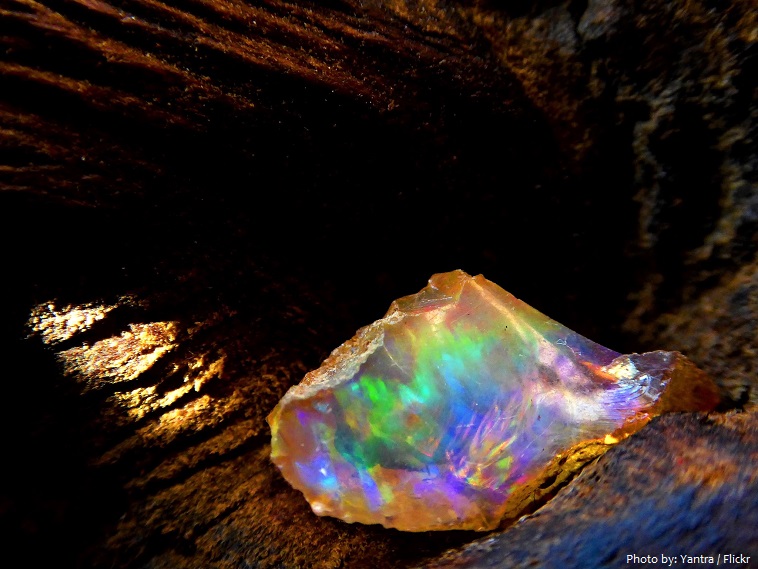 Opal was rare and very valuable in antiquity.

In ancient times opal was included among the noble gems and was ranked second only to emerald by the Romans. 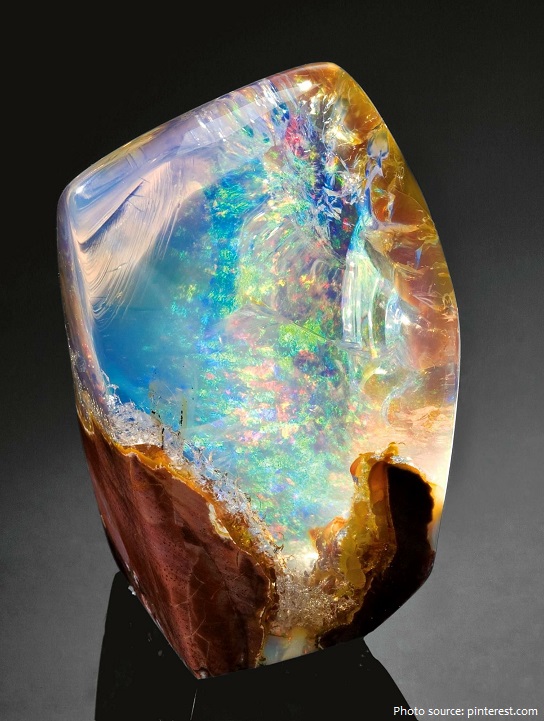 In the Middle Ages, opal was considered a stone that could provide great luck because it was believed to possess all the virtues of each gemstone whose color was represented in the color spectrum of the opal.

Following the publication of Sir Walter Scott’s Anne of Geierstein in 1829, opal acquired a less auspicious reputation. In Scott’s novel, the Baroness of Arnheim wears an opal talisman with supernatural powers. When a drop of holy water falls on the talisman, the opal turns into a colorless stone and the Baroness dies soon thereafter. Due to the popularity of Scott’s novel, people began to associate opals with bad luck and death. Within a year of the publishing of Scott’s novel in April 1829, the sale of opals in Europe dropped by 50%, and remained low for the next 20 years or so.

Even as recently as the beginning of the 20th century, it was believed that when a Russian saw an opal among other goods offered for sale, he or she should not buy anything more, as the opal was believed to embody the evil eye. 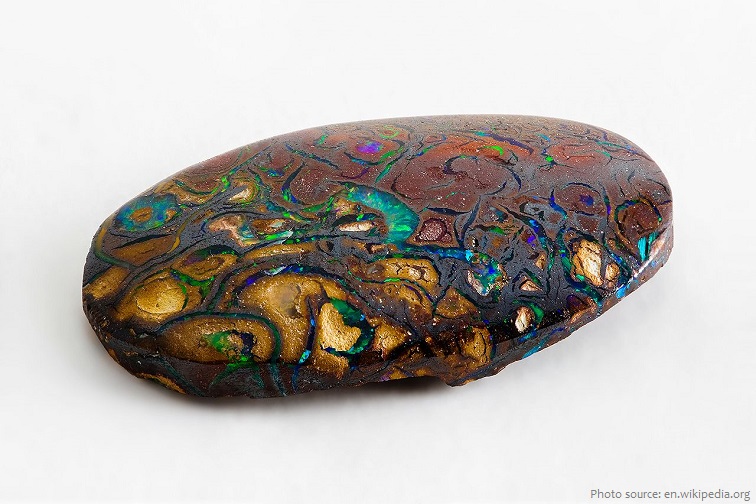 In Asia, opal is viewed as a symbol of hope.

Opals were particularly popular in the Art Deco era, when gemstone artists preferred them to all other stones. 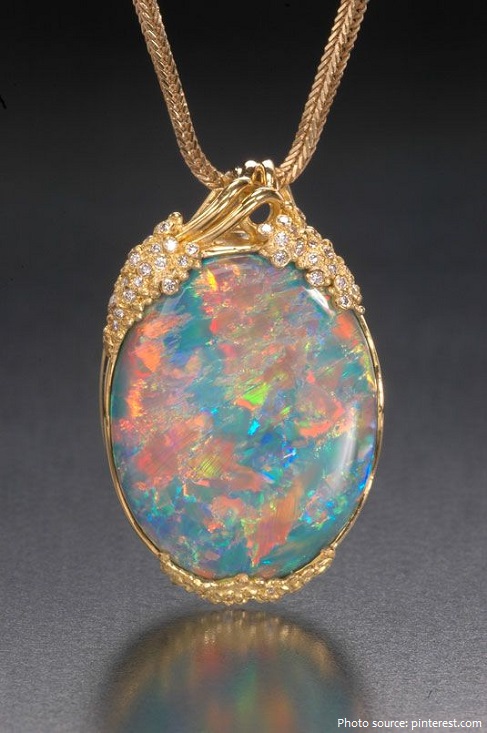 The Olympic Australis is the largest and most valuable opal yet found (as of 1961), valued at A$2,500,000. It was found in 1956 at the ‘Eight Mile’ opal field in the outback opal gemstone mining town of Coober Pedy in South Australia.

The Virgin Rainbow is one of the world’s rarest and most expensive opals. It literally glows in the dark. In fact, as it gets darker around the opal, the opal appears ever more vibrant. It’s valued at over $1 million and was purchased by the South Australian Museum in Adelaide.

The value of each individual opal differs greatly depending on the unique qualities of the opal. There are many determining factors, including body tone, play of colour, colours present, brilliance, pattern, and size.

Opal is softer than most other gemstones. Because of that opal is best suited for use in earrings, brooches and other pieces of jewelry that rarely encounter scuffs and impacts. When used in a ring, the best designs have a bezel that fully protects the stone.

Opal is the national gemstone of Australia. 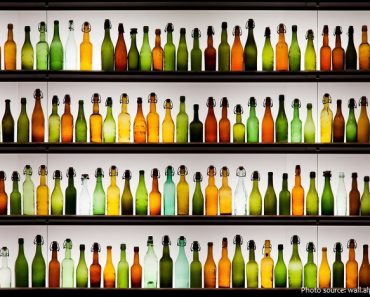 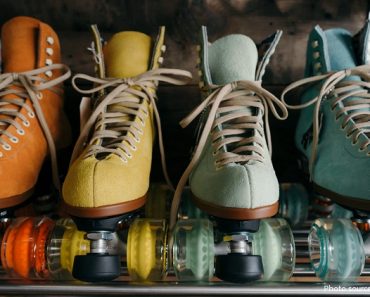 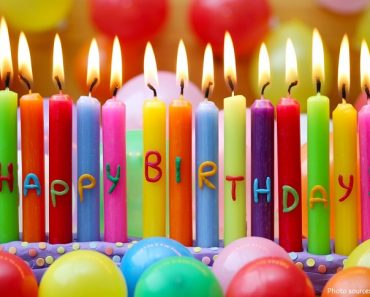 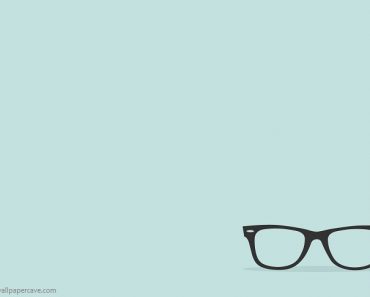 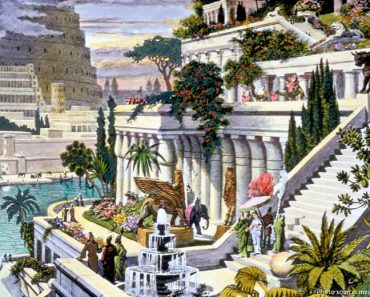