The Olympic Mountains are a mountain range of the United States.

It is situated on the Olympic Peninsula, a large arm of land in western Washington that stretches across Puget Sound.

The Olympic Mountains have the form of a cluster of steep-sided peaks surrounded by heavily forested foothills and incised by deep valleys. They are surrounded by water on three sides, separated from the Pacific by the 20 to 35 km (12 to 22 mi) wide coastal plain. The general form of the range is more or less circular, or somewhat horseshoe-shaped, and the drainage pattern is radial.

The Olympic Mountains are not especially high – several peaks in the range exceed 2,100 meters (7,000 feet), including Mount Anderson, Mount Deception, and Mount Constance. 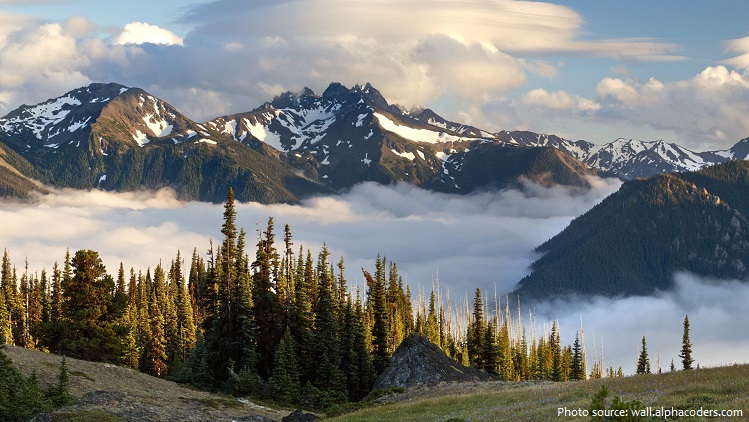 There are 244 named mountains in Olympic Mountains.

The prevailing westerly wind off the Pacific Ocean produces heavy annual precipitation on the western slopes, resulting in the formation of picturesque rainforests dominated by Douglas fir, Sitka spruce, western red cedar, bigleaf maple, and western hemlock. Some trees reach heights of 90 metres (300 feet) and diameters of more than 2 metres (7 feet). The eastern slopes receive much less precipitation and are less thickly forested. 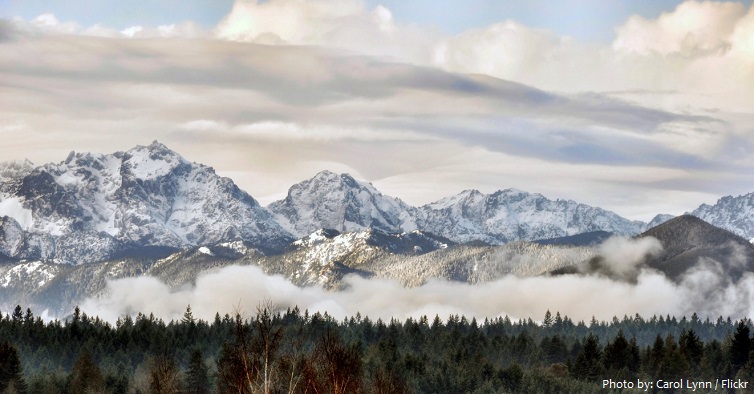 The western slopes are the wettest place in the 48 contiguous states.

Despite its low altitude, Mount Olympus receives record snowfall every year and is the third largest glacial system in the continental United States.

The range holds about 250 glaciers, 60 of which are named.

Many alpine lakes are left from the glaciers that once moved across the land from sea level to near the tips of the mountains. As glaciers melt, they can leave behind glacial lakes at their base. 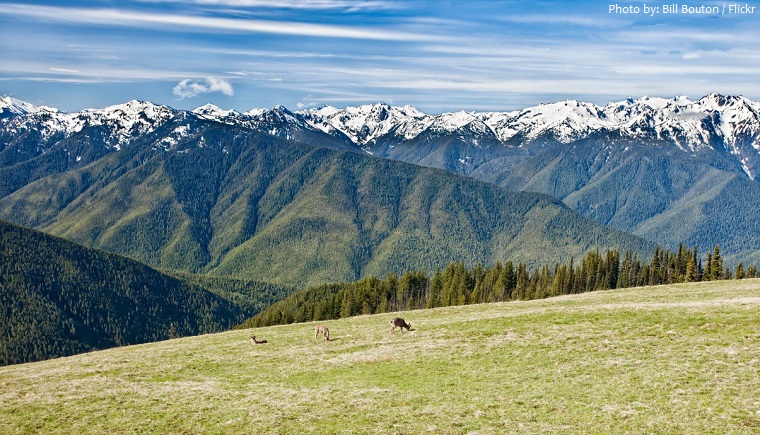 Geologists believe that the rock of the Olympic Mountains developed beneath the sea because marine fossils are found near the summits. Around 35 million years ago, the great plate carrying the floor of the Pacific Ocean collided with the North American plate. The upper levels of the seabed plate rose up and crumpled into the Olympic Mountains.

Later, glaciers, wind, and water shaped the mountains into what we see today: breathtaking vistas of deep canyons, towering mountain ridges, and meadows dense with wildflowers. 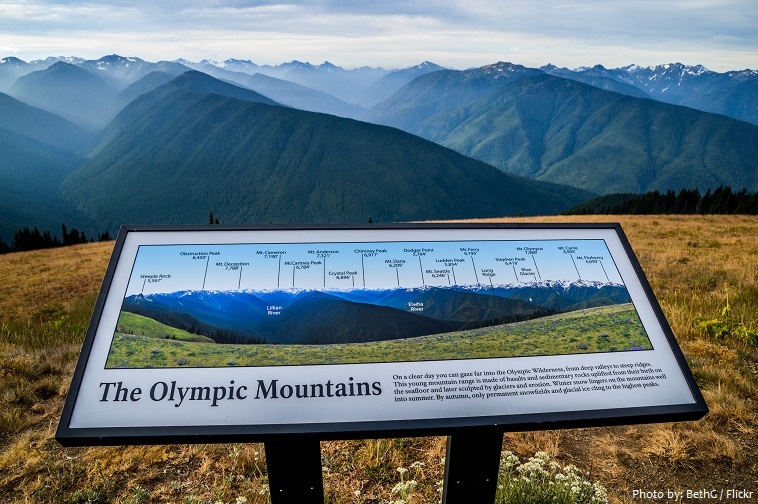 The mountains were originally called “Sun-a-do” by the Duwamish Indians, while the first European to see them, the Spanish navigator Juan Pérez, named Mount Olympus “Santa Rosalia”, in 1774.

In 1788, a British mariner John Meares passed by the majestic, snow-covered mountains of northwest Washington – the peaks seemed the perfect dwelling place for Greek gods, so he named them the Olympic Mountains.

The first crossing of the Olympic Mountains was done from November 1889 through May 1890 by the Press Expedition, a group of 5 men led by Canadian James H. Christie, sponsored by the Seattle newspaper Press, which ascended the Elwha River and descended the North Fork Quinault River. 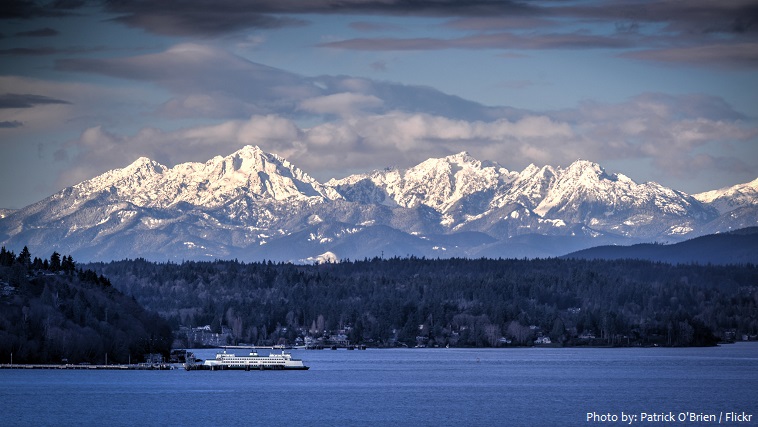 Mount Olympus itself was not ascended until 1907, one of the first successes of The Mountaineers, which had been organized in Seattle just a few years earlier. A number of the more obscure and least-accessible peaks in the range were not ascended until the 1970s.

A large portion of the range is contained within the Olympic National Park. Of this 95% is part of the Olympic Wilderness. 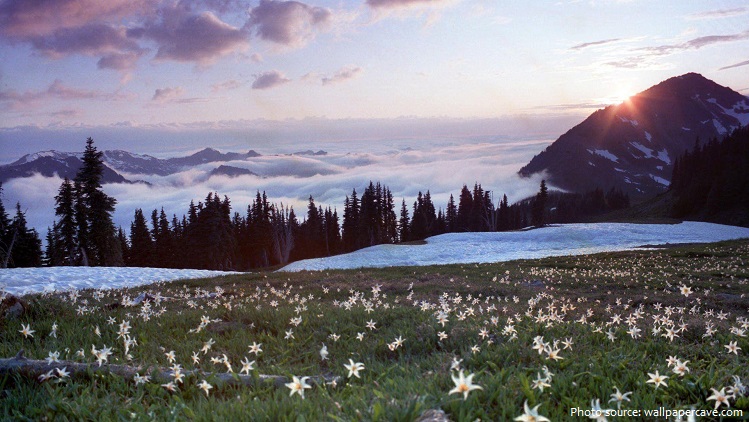 President Theodore Roosevelt originally designated Mount Olympus National Monument on 2 March 1909. The monument was redesignated as a national park by Congress and President Franklin Roosevelt on June 29, 1938. In 1976, Olympic National Park was designated by UNESCO as an International Biosphere Reserve, and in 1981 as a World Heritage Site. In 1988, Congress designated 95 percent of the park as the Olympic Wilderness.

State parks and wildlife areas occur in the lower elevations of the range. 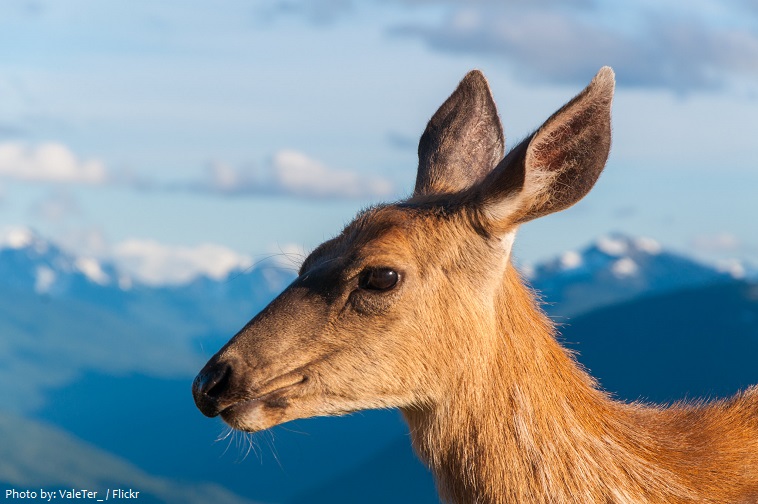 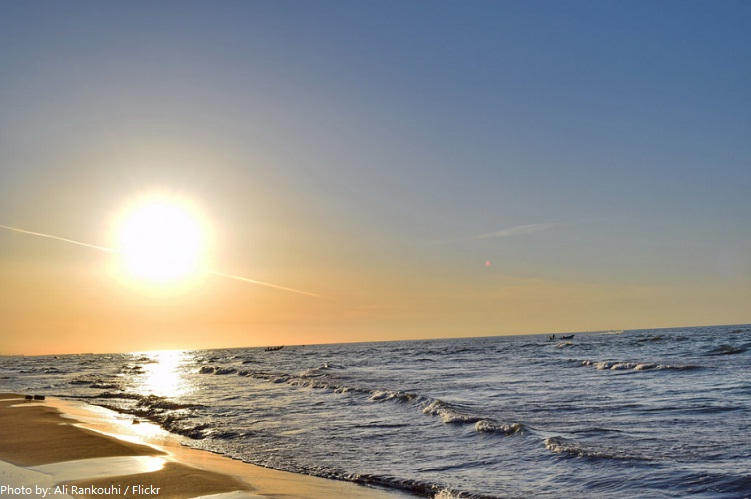 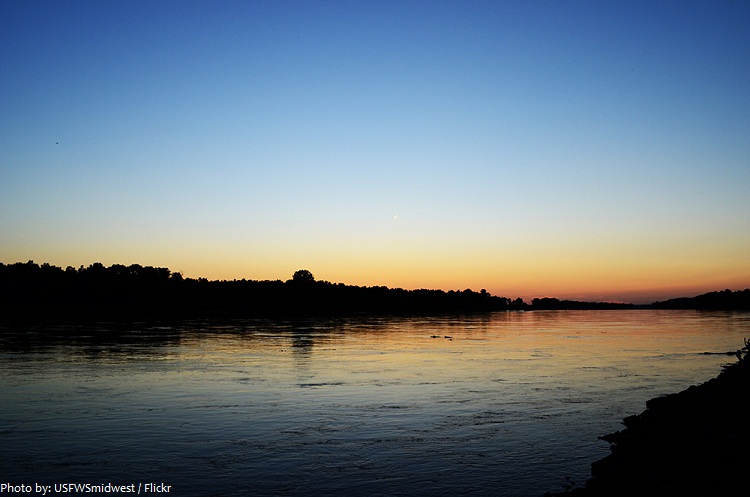 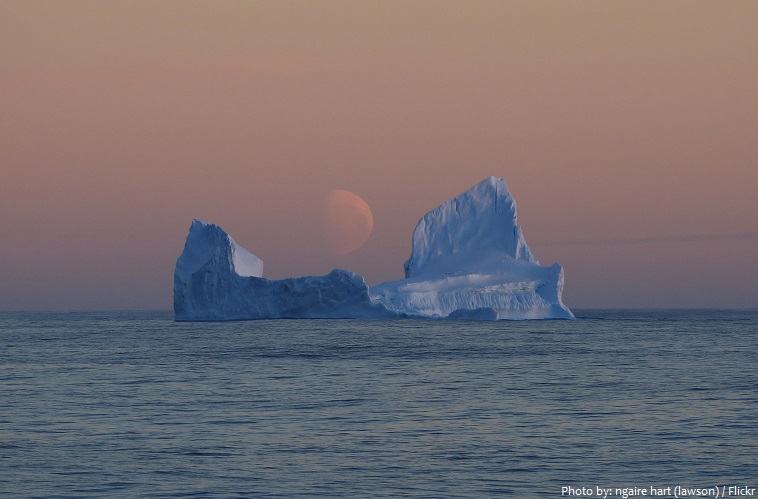