Numbat also called the banded anteater is marsupial mammal of the family Myrmecobiidae, of which it is the sole living representative.

They were formerly found across southern Australia from Western Australia across as far as northwestern New South Wales.

However, the range has declined significantly since the arrival of Europeans, and the species has survived only in several remnant populations in two small patches of land in the Dryandra Woodland and the Perup Nature Reserve, both in Western Australia.

Today, numbats are found only in areas of eucalypt forest, but they were once more widespread in other types of semiarid woodland, spinifex grassland, and in terrain dominated by sand dune. 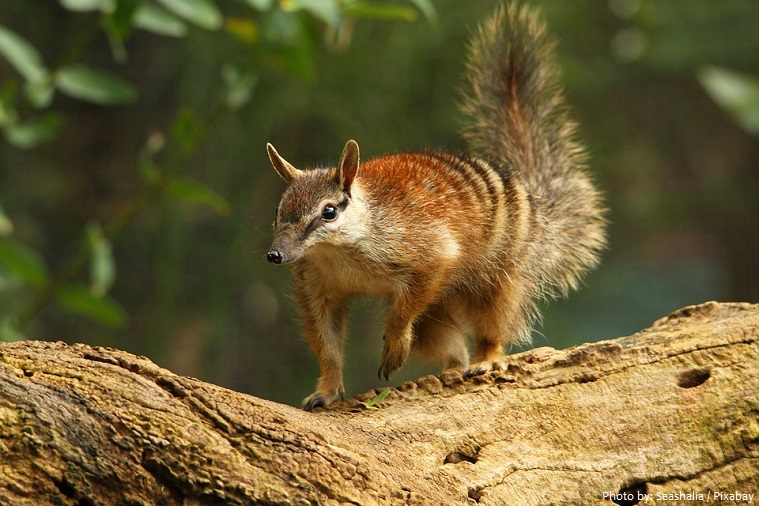 The lifespan of the numbat is up to 5 years in the wild and up to 11 years in captivity.

Its coat generally is reddish brown, becoming blacker toward the rump, and there are about seven or eight transverse white stripes on the body from behind the forelegs to the rump, where they are most clearly marked.

The teeth are small, and there are extra molars, giving a total number of 50–52 teeth. 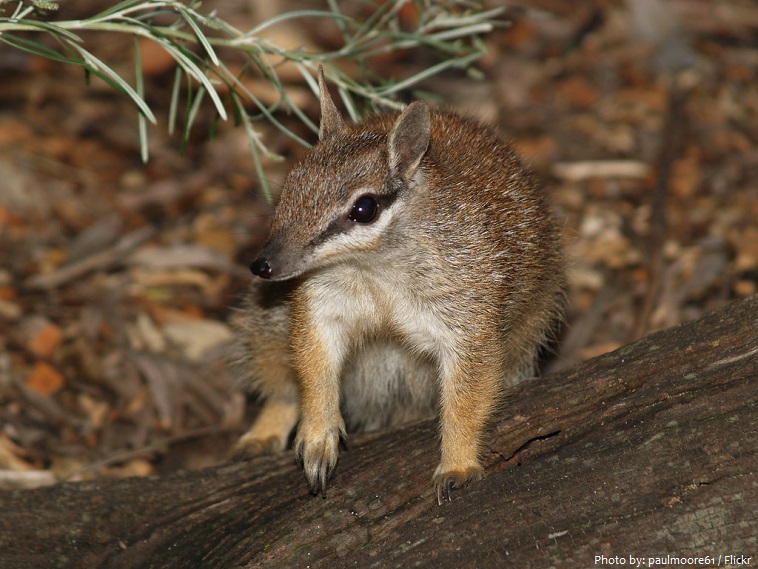 The tongue is long and sticky, and the forefeet are strong-clawed, for digging.

At night, the numbats seek shelter inside hollow logs, and during the day, numbats can avoid predators, especially birds and foxes, by staying hidden within the darkness of the logs.

During mating seasons, logs provide numbats an area for their nesting sites.

Most importantly, the heartwood of the majority of trees in eucalypt woodlands are eaten by termites, which are the base of the numbat’s diet. 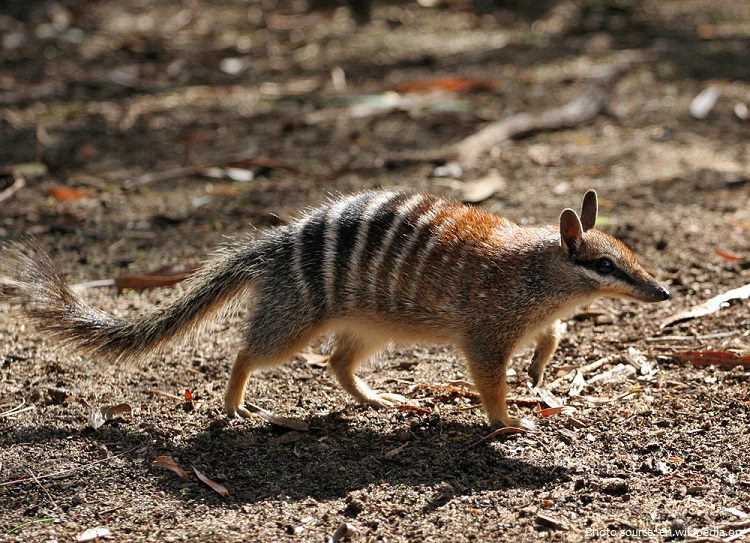 Because numbats are not powerful enough to break into termite mounds to get to their prey, they have to feed during the day when there is a great abundance of active termites in the shallow galleries.

It uses a well-developed sense of smell to locate the shallow and unfortified underground galleries that termites construct between the nest and their feeding sites; these are usually only a short distance below the surface of the soil, and vulnerable to the numbat’s digging claws.

An adult numbat requires up to 20,000 termites each day. The only marsupial fully active by day, the numbat spends most of its time searching for termites.

Numbats produce a variety of vocalizations. During breeding season, if a female and male are both interested in one another, they vocalize by producing a series of soft clicks. 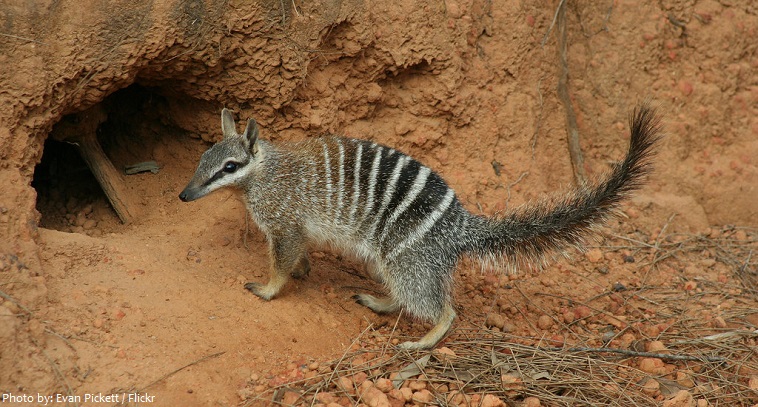 Numbats breed in February and March (late austral summer), normally producing one litter a year. Gestation lasts 15 days, and results in the birth of four young. Unusually among marsupials, female numbats have no pouch, although the four teats are protected by a patch of crimped, golden hair and by the swelling of the surrounding abdomen and thighs during lactation.

The young are 2 cm (0.8 in) long at birth. They crawl immediately to the teats and remain attached until late July or early August, by which time they have grown to 7.5 cm (3 in). They are 3 cm (1.2 in) long when they first develop fur, the patterning of the adult begins to appear once they reach 5.5 cm (2.2 in). The young are left in a nest or carried on the mother’s back after weaning, they become fully independent by November.

Numbats provide important ecological values as predators specialized on termites, while being preyed upon by carpet pythons, red foxes, eagles, hawks, and falcons.

They are currently listed by the IUCN Red List and the US Fish & Wildlife Service as an endangered species.

The numbat is the emblem of Western Australia.

This animal first became known to Europeans in 1831. It was discovered by an exploration party who were exploring the Avon Valley under the leadership of Robert Dale. 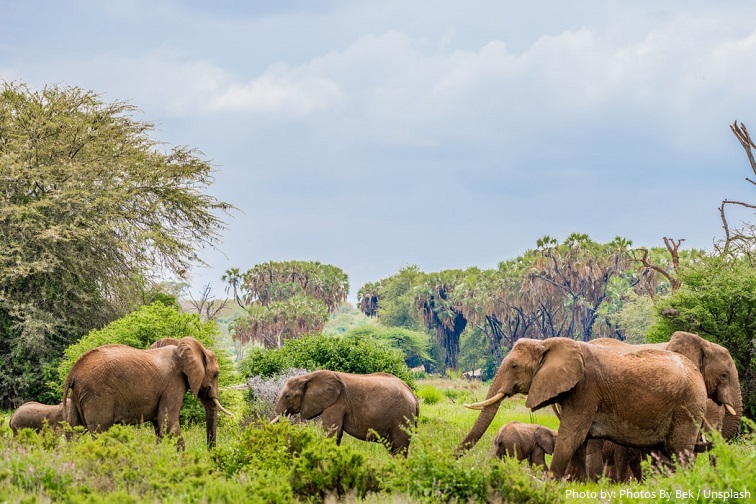 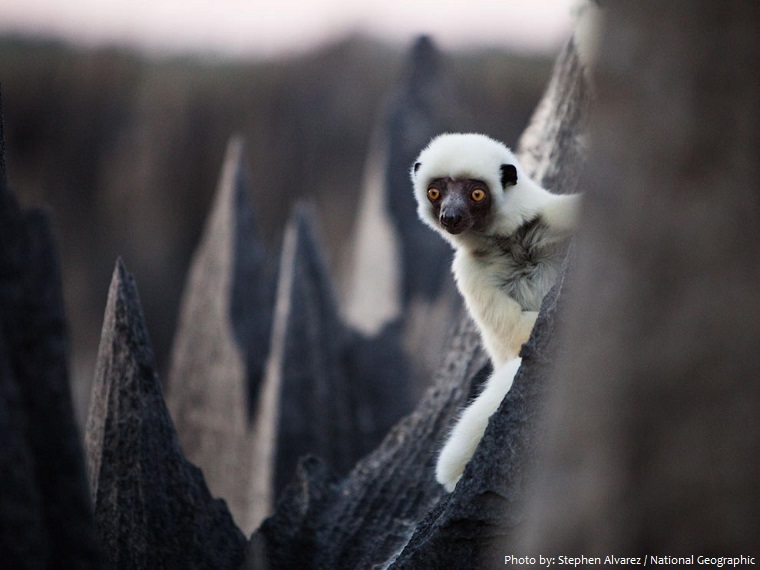