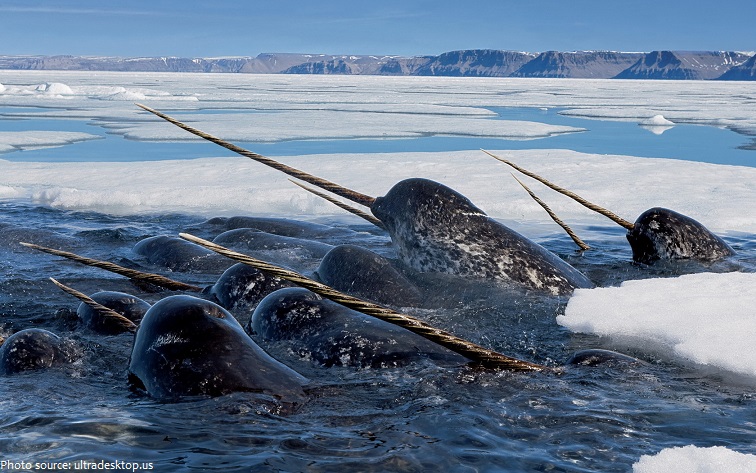 The narwhal, or narwhale (Monodon monoceros), is a medium-sized toothed whale.

Often dubbed the unicorns of the sea, narwhals are strange and beautiful creatures with long tusks protruding from their heads.

It lives year-round in the Arctic waters of Canada, Greenland, Norway and Russia.

Narwhals can live up to at least 50 years.

Narwhals have small rounded heads, short flippers with upturned tips, and no dorsal fin but an uneven dorsal ridge along the spine.

The narwhal males are distinguished by a long, straight, helical tusk, which is an elongated upper left canine; in rare instances a male with two tusks has been observed. Females sometimes grow a small tusk of their own, but it does not become as prominent as the male’s. 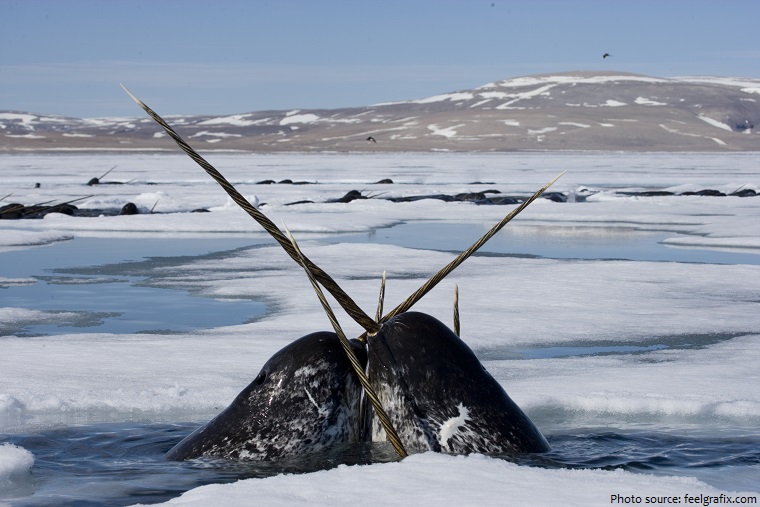 For both sexes, excluding the male’s tusk, the total body size can range from 3.95 to 5.5 meters (13 to 18 feet); the males are slightly larger than the females.

Narwhals have a black and white mottled skin pattern on the dorsal size and are white underneath on their belly. Narwhals are born gray and as they age they turn black and white. Very old narwhals can be very white with few black spots. 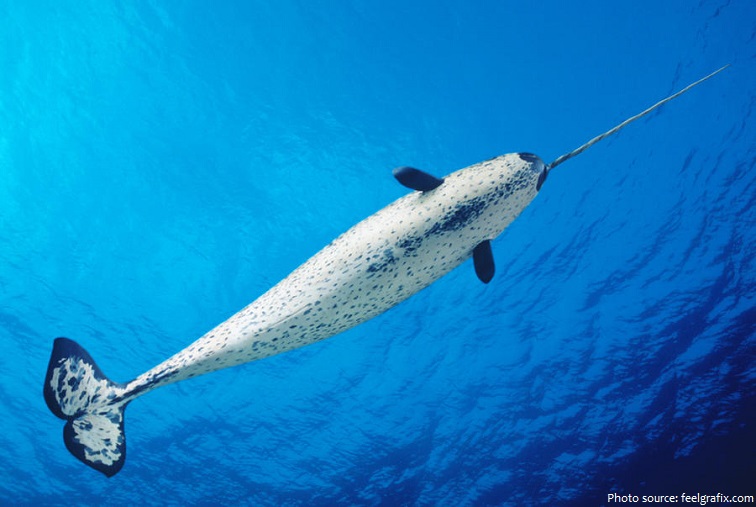 Narwhals normally congregate in groups of about 5 to 10, and sometimes up to 20.

In the summer, several groups come together, forming larger aggregations which can contain from 500 to over 1000 individuals.

Narwhals exhibit seasonal migrations, with a high fidelity of return to preferred, ice-free summering grounds, usually in shallow waters. In summer months they move closer to coasts, usually in pods of 10–100 . In the winter, they move to offshore, deeper waters under thick pack ice, surfacing in narrow fissures in the sea ice, or leads. 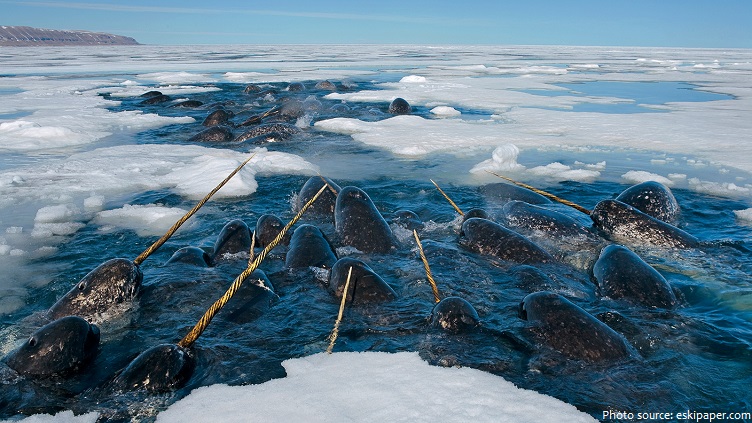 When in their wintering waters, narwhals make some of the deepest dives recorded for a marine mammal, diving to at least 800 meters (2,600 feet) over 15 times per day, with many dives reaching 1,500 meters (4,900 feet). Dives to these depths last around 25 minutes, including the time spent at the bottom and the transit down and back from the surface.

Narwhals make a wide range of clicks and whistles underwater. Their sounds seem to vary in summer and winter. They use the clicks, or echolocation, to detect objects in the water (like prey), for navigation and communication. 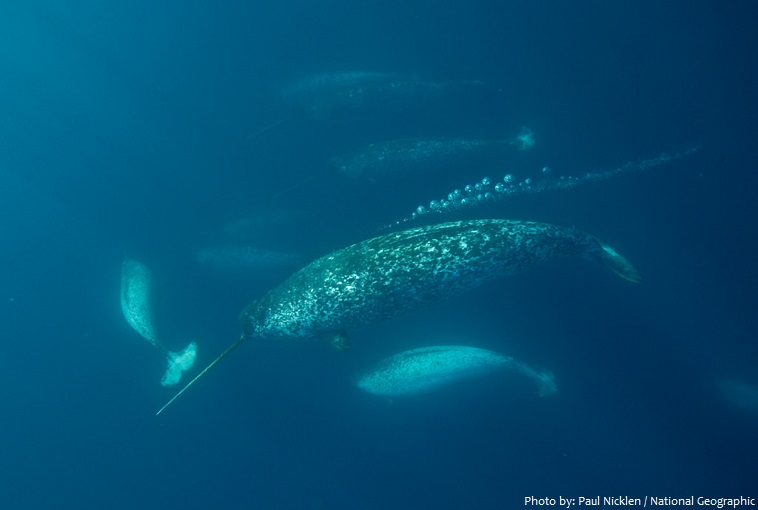 Narwhal tusks are packed with nerves and covered in tiny holes that allow seawater to enter. This gives tusks a sensitivity that could help narwhals detect changes in their environment such as temperature or even the water’s saltiness.

Scientists are not certain of the tusk’s purpose, but some believe it is prominent in mating rituals, perhaps used to impress females or to battle rival suitors.

Narwhals reach sexual maturity between 6-9 years, and females give birth to a calf every third year, on average. The breeding period is in early spring (March-April) in the dense ice of their wintering grounds. The gestation period is about 14 months and they give birth in late spring (May-June) during their northbound migration to their summering grounds.

Calves are dependent on milk for around 20 months. This long lactation period gives calves time to learn skills needed for survival during maturation when they stay within two body lengths of the mother. 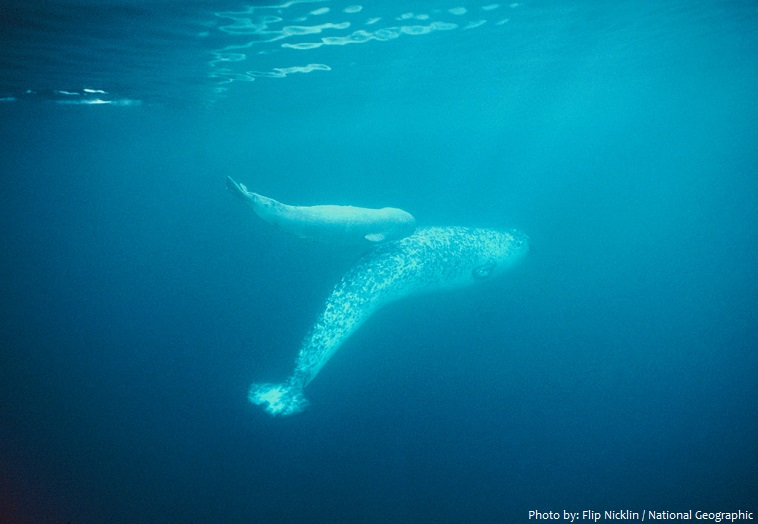 Narwhals are mostly hunted by polar bears and orcas. Native Inuit people are also allowed to hunt this whale legally.

Narwhals have been harvested for over a thousand years by Inuit people in northern Canada and Greenland for meat and ivory.

They are often killed by suffocation when the sea ice freezes over. Another cause of fatality, specifically among young whales, is starvation.

The current population of the narwhal is about 75,000, so narwhals qualify for Near Threatened under the criterion of the International Union for Conservation of Nature (IUCN).

The scientific name for narwhal, Monodon monoceros, is derived from the Greek “one tooth, one horn”. The black and white skin coloration contributed to their common name “narwhal”. The old Norse prefix “Nar” means “corpse” and “hval” means “whale”. Thus “corpse whale” refers to how their skin color resembles that of a drowned sailor.

The narwhal was one of many species described by Carl Linnaeus in his publication Systema Naturae in 1758.

Narwhal is one of two living species of whale in the Monodontidae family, along with the beluga whale.

The narwhal was one of two possible explanations of the giant sea phenomenon written by Jules Verne in his 1870 novel Twenty Thousand Leagues Under the Sea.

2 responses to “Interesting facts about narwhals”