The city is located in the southwest of the province of Quebec. It lies on Montreal Island near the intersection of where the St. Lawrence and Ottawa rivers meet.

As of January 2020, the population of Montreal is about 1.7 million people. It is the 2nd most populouscity in Canada. 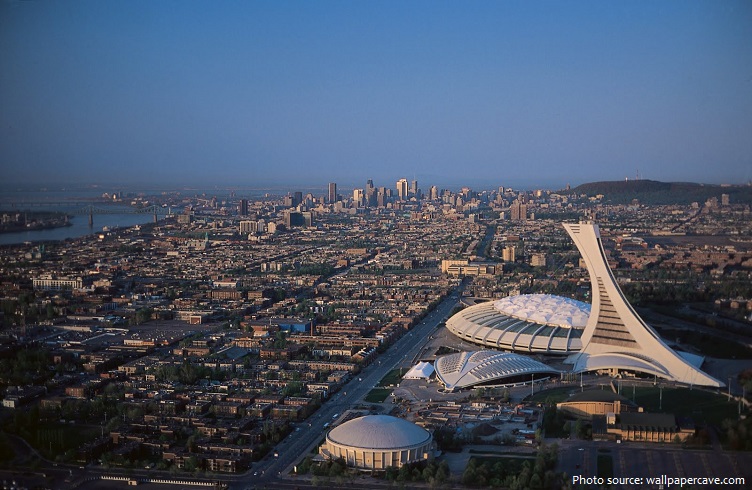 Montreal is a city with considerable French colonial history dating back to the 16th century.

European settlers from La Flèche in the Loire valley first named their new town, founded in 1642, Ville Marie (“City of Mary”), named for the Virgin Mary.

Its current name comes from Mount Royal, the triple-peaked hill in the heart of the city.

It began as a missionary settlement but soon became a fur-trading centre, a role that was enhanced after the conquest of New France by the British in 1763.

Montreal’s location on the St. Lawrence proved to be a major advantage in its development as a transportation, manufacturing, and financial centre. 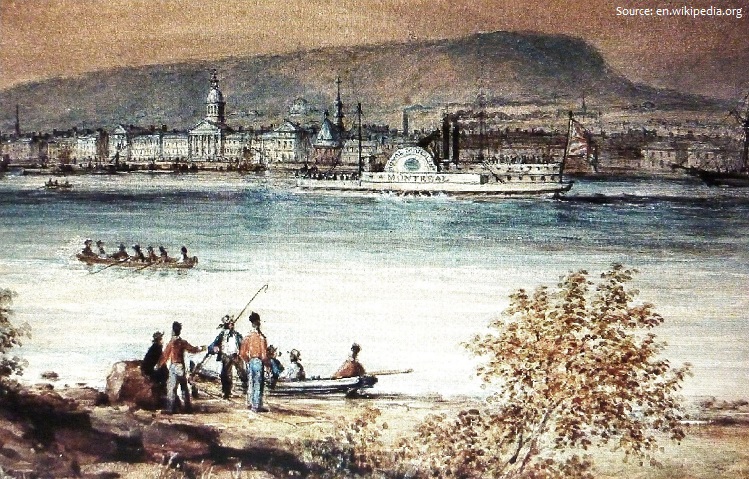 From the time of the confederation of Canada (1867), Montreal was the largest metropolitan centre in the country until it was overtaken by Toronto in the 1970s.

Today, Montreal is Canada’s leading industrial, commercial, service cultural and intellectual center. Montreal is a dynamic city and is known for its beautiful architecture, rich heritage and its friendly people.

Mont Royal rises 233 meters (764 feet) above the city and is the green lung near the city center. Majestically rising up in the middle of the city, Mount is a symbol of the city’s heritage, history,
geography, and inspiration, hosting founding institutions, beautiful hillside cemeteries, and Mount Royal Park, a 4-season playground. 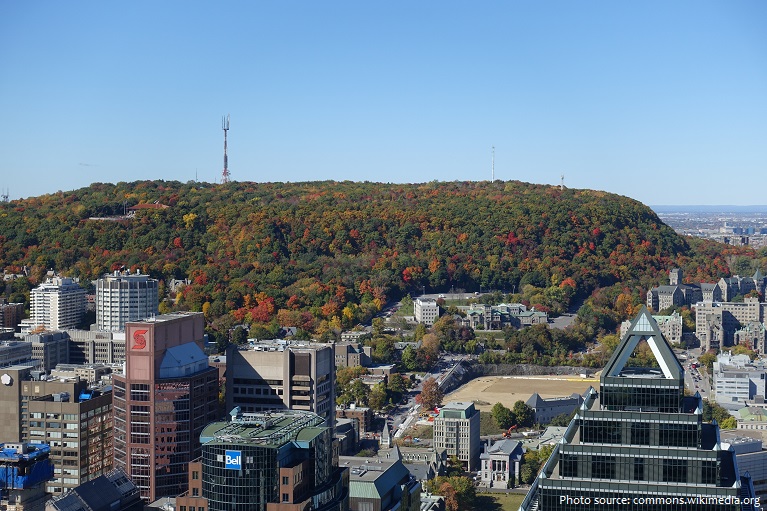 Old Montréal is a remarkable concentration of buildings dating from the 17th, 18th, and 19th centuries. This historic neighborhood is a safe and vibrant community and tourist attraction, with hotels, restaurants, shops, residences and commercial spaces. In 1964, much of Old Montreal was declared a historic district by the Ministère des Affaires culturelles du Québec.

Notre-Dame Basilica is a basilica in the historic district of Old Montreal. The church is located at 110 Notre-Dame Street West, at the corner of Saint Sulpice Street. It is located next to the Saint-Sulpice Seminary and faces the Place d’Armes square. The interior of the church is amongst the most dramatic in the world and regarded as a masterpiece of Gothic Revival architecture. The vaults are coloured deep blue and decorated with golden stars, and the rest of the sanctuary is decorated in blues, azures, reds, purples, silver, and gold. It is filled with hundreds of intricate wooden carvings and several religious statues. Unusual for a church, the stained glass windows along the walls of the sanctuary do not depict biblical scenes, but rather scenes from the religious history of Montreal. 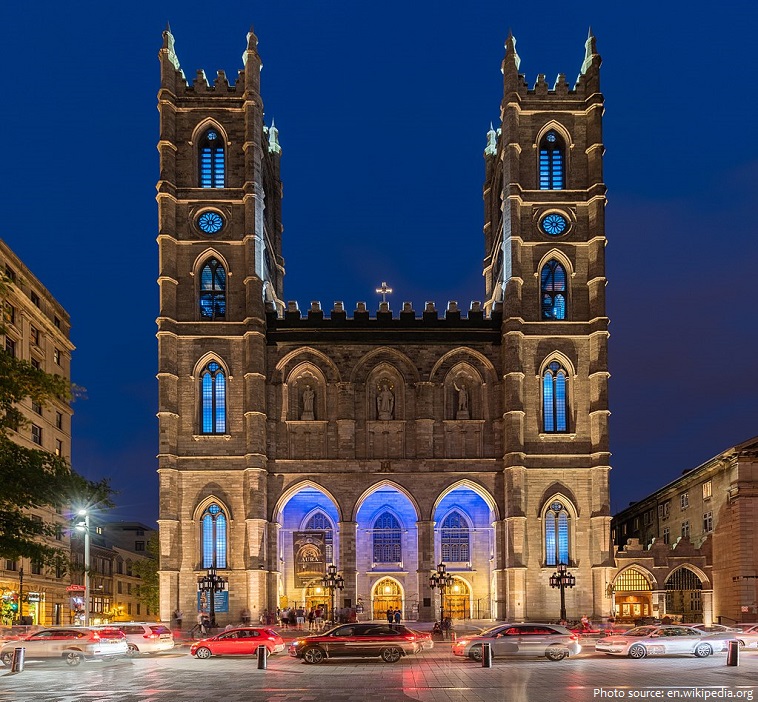 Saint Joseph’s Oratory of Mount Royal is a Roman Catholic minor basilica and national shrine on Mount Royal’s Westmount Summit in Montreal. It is Canada’s largest church and claims to have one of the largest domes in the world. The shrine’s story began in 1904, when Brother André of the Congregation of the Holy Cross, supported by a few friends, had the first small chapel constructed on Mount Royal in honour of Saint Joseph. It became so crowded that the crypt, a church with capacity for 1000 people, was built in 1917. Work on the basilica, in Italian Renaissance style, began in 1924 and was completed in 1967. 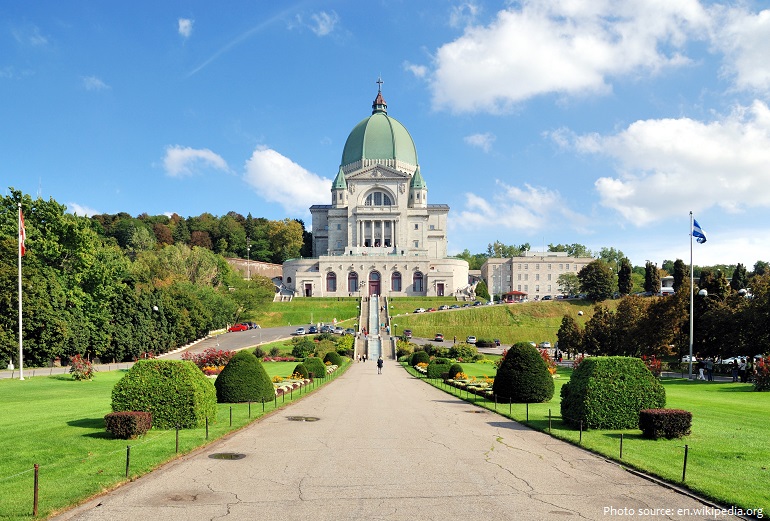 The Old Port of Montreal is the historic port of Montreal, Quebec, Canada. Located in Old Montreal, it stretches for over 2 km along the Saint Lawrence River. It was used as early as 1611, when French fur traders used it as a trading post. In 1976, Montreal’s Port activities were moved east to the present Port of Montreal in the borough of Mercier–Hochelaga-Maisonneuve. The Old Port was redeveloped in the early 1990s, under the direction of architects Aurèle Cardinal and Peter Rose. It is today a recreational and historical area and draws 6 million tourists annually. 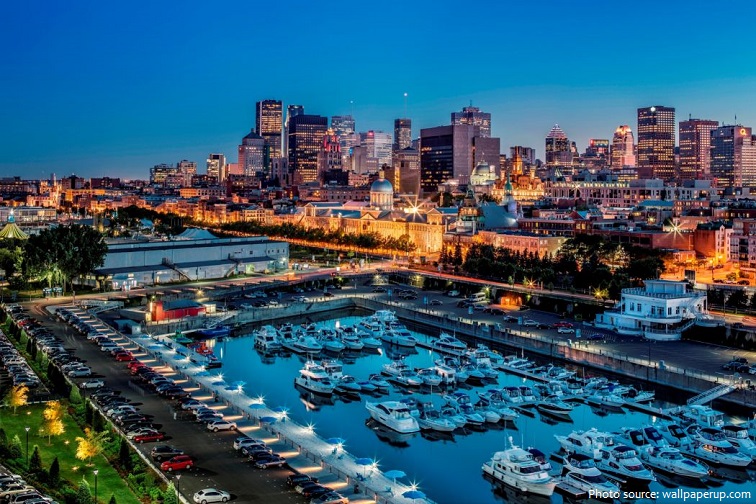 The Montreal Botanical Garden is a large botanical garden in Montreal, Quebec, Canada comprising 75 hectares (190 acres) of thematic gardens and greenhouses. It was designated a National Historic Site of Canada in 2008 as it is considered to be one of the most important botanical gardens in the world due to the extent of its collections and facilities. 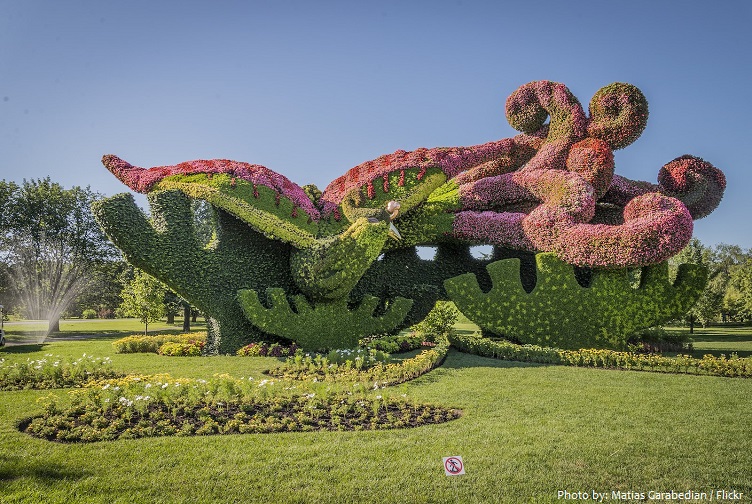 The Montreal Museum of Fine Arts is an art museum in Montreal. It is the largest art museum in Canada by gallery space. The museum is spread across five pavilions, and occupies a total floor area of 53,095 square metres (571,510 square feet), 13,000 (140,000 sq ft) of which are exhibition space. The permanent collection includes approximately 44,000 works. 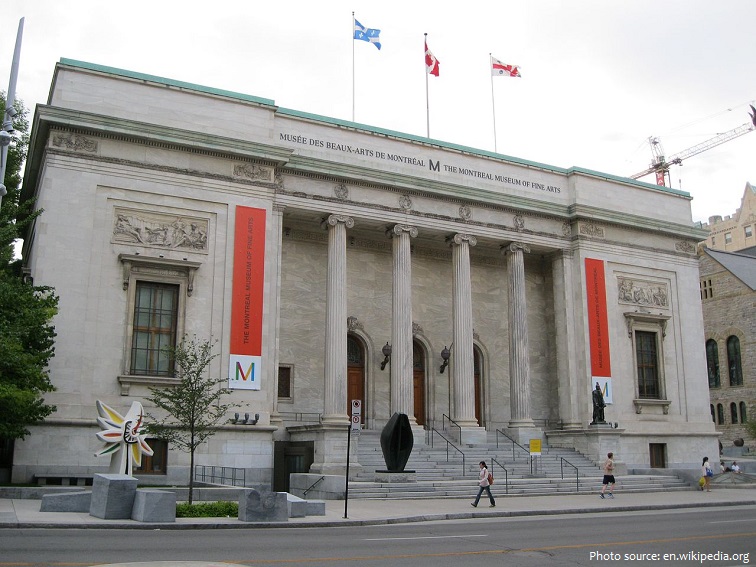 La Ronde is an amusement park in Montreal, built as the entertainment complex for Expo 67, the 1967 world fair. Today, it is owned and operated by Six Flags. The park is under an emphyteutic lease with the City of Montreal, which expires in 2065. It is the largest amusement park in Quebec and second largest in Canada. 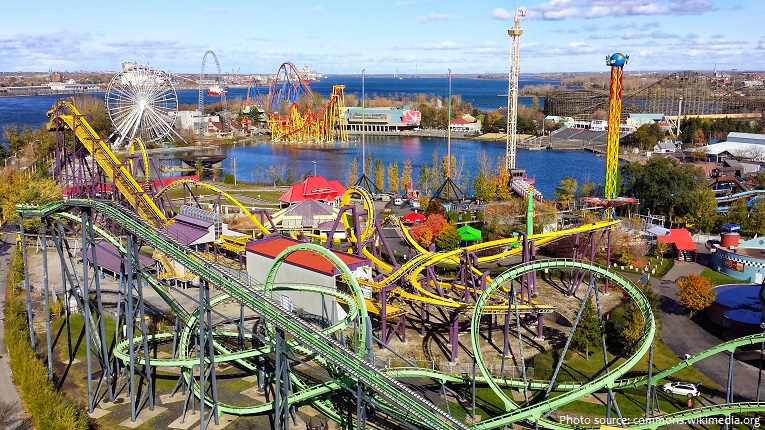 French Canadians are the majority population in Montreal, which is often said to be the second largest French-speaking city in the world (after Paris), though the accuracy of that statement is sometimes questioned (principally by those who make the same claim for Kinshasa and Algiers).

The city has been a destination for many immigrants and is widely considered to be one of North America’s most cosmopolitan cities.

Montreal has the second-highest number of consulates in North America, serves as the location of the headquarters of the International Civil Aviation Organization. 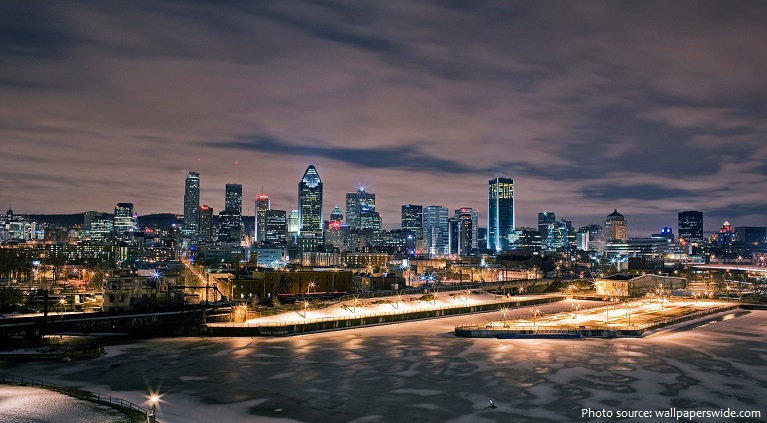 In 2006 Montreal was named a UNESCO City of Design, only one of three design capitals of the world (the others being Berlin and Buenos Aires).

The city hosts the Canadian Grand Prix of Formula One, the Montreal International Jazz Festival and the Just for Laughs festival.

Montreal has a distinct four-season continental climate with warm to hot summers and cold, snowy winters.