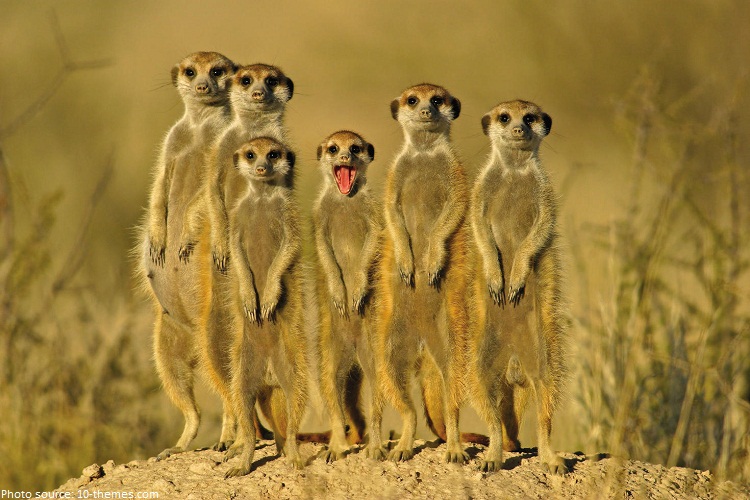 The meerkat or suricate is a small carnivoran belonging to the mongoose family.

Meerkats live in the deserts and grasslands of the southern tip of Africa.

A group of meerkats is called a mob, gang or clan. 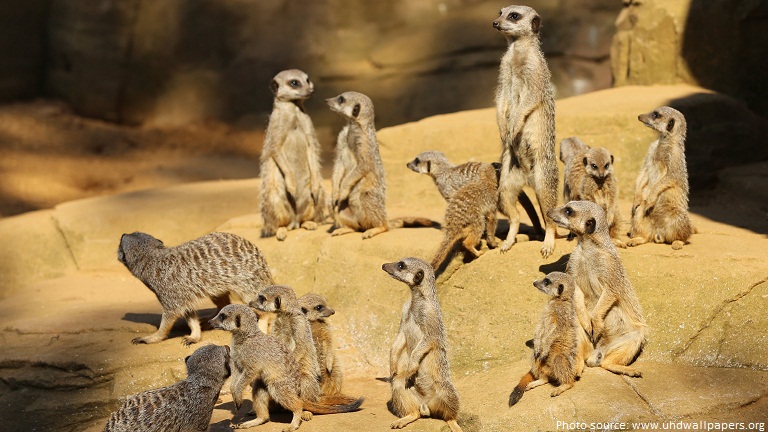 Meerkats have a matriarchal society.

A meerkat clan often contains about 20 meerkats, but some super-families have 50 or more members.

For meerkats, there isn’t just safety in numbers—there’s also companionship. 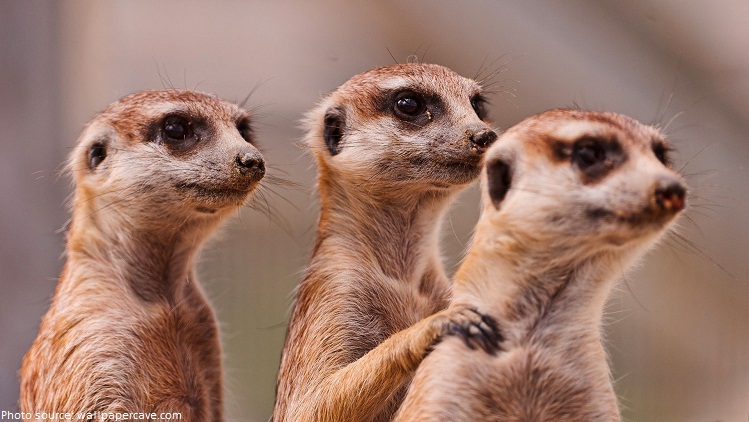 Meerkat mobs spend a lot of their time grooming and playing together to keep the family as a tight unit.

The mob is made up of several family groups, with one dominant pair that produces most of the offspring, but they don’t have to be related to belong to the same group.

There are few animals on Earth who work as well together as meerkats.

One of the most important roles a meerkat plays is that of the sentry, or watch guard. 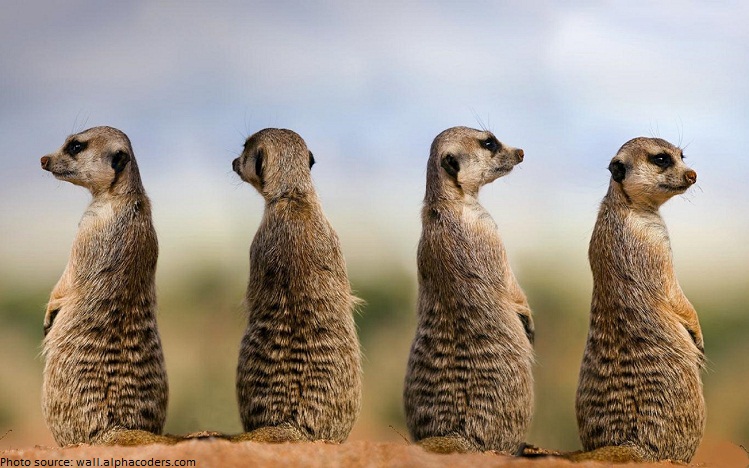 If the meerkat on guard spots danger, it barks loudly or whistles in one of six different ways. For example if the threat is of low, medium or high urgency and if the predator is in the air or on the ground.

While a few individuals guard the group, the rest busy themselves foraging for the foods that make up their varied diet.

Eating both plants and animals, meerkats are omnivores. Their diet mostly consists of insects, which they sniff out using their enhanced sense of smell. They also eat small rodents, fruit, eggs, birds, lizards, and even poisonous scorpions.

When hunting small game, they work together and communicate with purring sounds.

They have a home territory of about 10 square kilometers (4 square miles) or more and hunt in a different section each day, returning to the first area after a week

Meerkats are diurnal: once the sun is up, they carefully emerge from their burrow and spend some time sunbathing and grooming.

They are extremely cute, with bushy, brown-striped fur, a small, pointed face, and large eyes surrounded by dark patches. 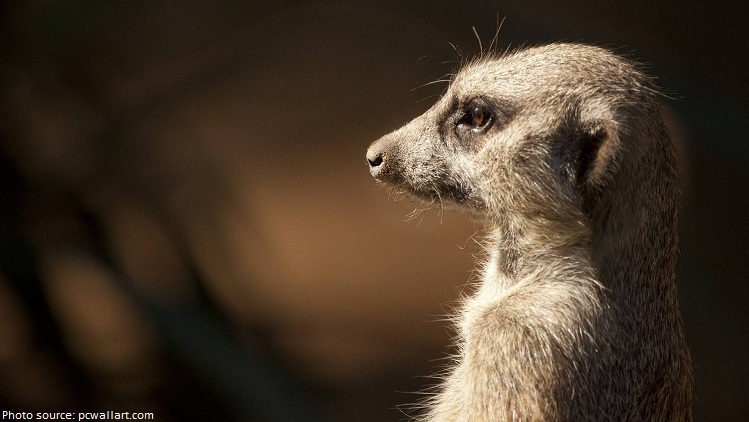 Dark patches around their eyes act to cut down on the sun’s glare, and long, horizontal pupils give meerkats a wide range of vision.

The meerkat uses its tail to balance when standing upright. They often stand up in the morning to absorb heat on their bellies after a long cold desert night.

Meerkats are excellent diggers, they have long, strong, curved claws that they use for digging burrows.

Meerkats can close their ears, and membrane covers and protects their eyes while they dig.

Living underground keeps mob members safe from predators and out of the harsh African heat. These burrows can be 2 meters (6.5 feet) deep and contain multiple entrances, tunnels, and rooms. 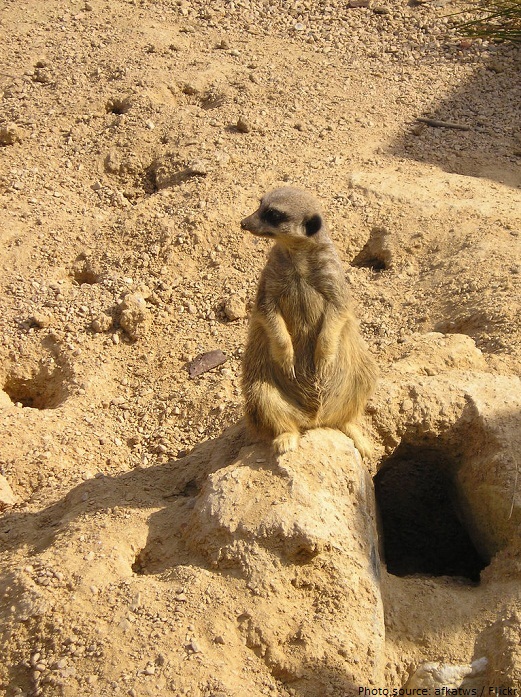 Within their territory the mob usually have up to 5 different burrows that they sleep in at night.

Meerkats have scent pouches below their tails and rub these pouches on rocks and plants to mark their territory.The territories of different groups often overlap, resulting in constant disputes. When the two groups meet fora face-off, the results can be tragic. Meerkats are vicious fighters that often kill each other in these skirmishes.

Females give birth to 1 to 8 babies at a time, but it is more common for meerkat mothers to have 2 to 4 offspring at a time.

The babies, called pups, are born underground, where they are safe from predators.

Several babysitters stay behind to watch over newborn pups.This duty rotates to different members of the mob, and a sitter will often go all day without food. 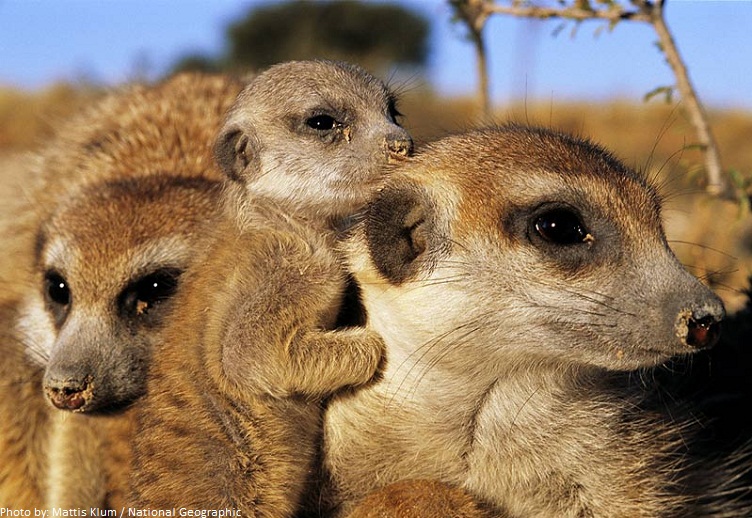 The babysitters’ main job is to protect pups from meerkats in rival mobs, who will kill the babies if they can.

Young meerkats do not know what kind of food to eat, so their mother or another adult teaches them.

Mother will bring them live bugs and teach them how to kill the prey.

She even brings home scorpions with their tail bitten off so the young can learn how to kill them without getting hurt.

Meerkat’s natural predators include including hawks, eagles, snakes and jackals.

Meerkats have been known to kill venomous snakes, but they don’t accomplish this task alone—they work as a mob. 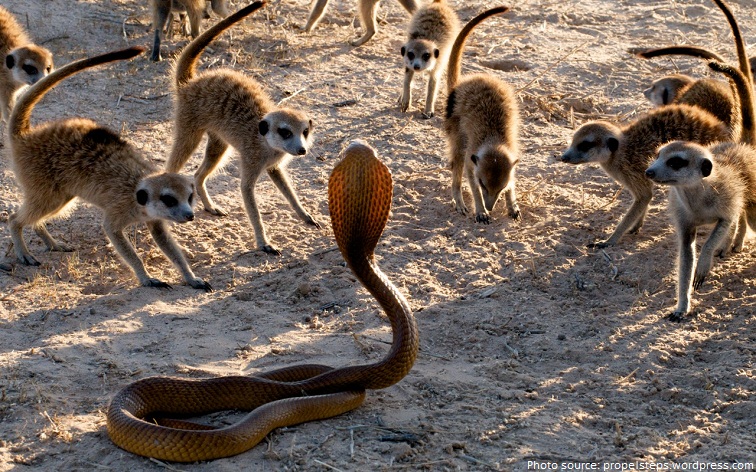 Meerkats are immune to scorpion venom, and they can withstand up to six times the snake venom that would kill a rabbit.

Able to survive without drinking water, meerkats get the moisture they need from eating roots and tubers as well as fruit such as tsama melons.

The Meerkat is one of those species that has always fascinated people with their characteristic behaviours having made them one of Africa’s most iconic small mammal species.

Most people know meerkats from the character Timon in The Lion King animated movie.