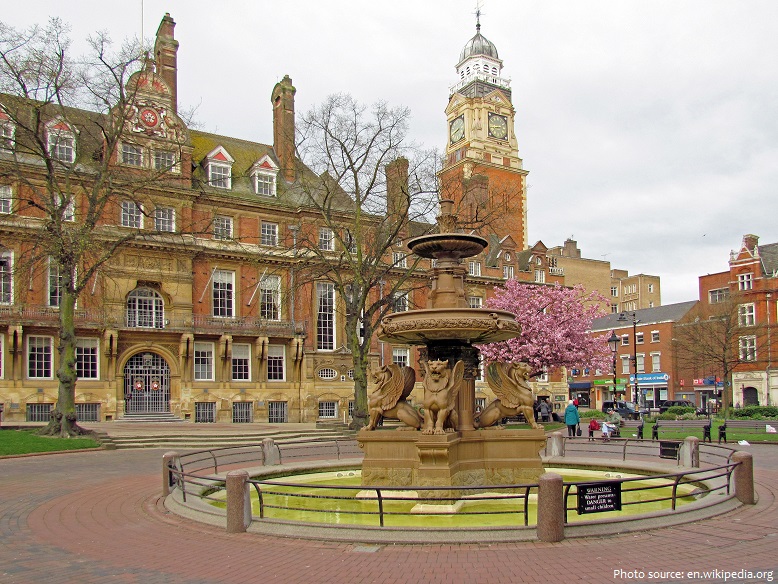 Leicester is a city and unitary authority area in the East Midlands of England, and the county town of Leicestershire.

It is situated on the River Soar and close to the eastern end of the National Forest. 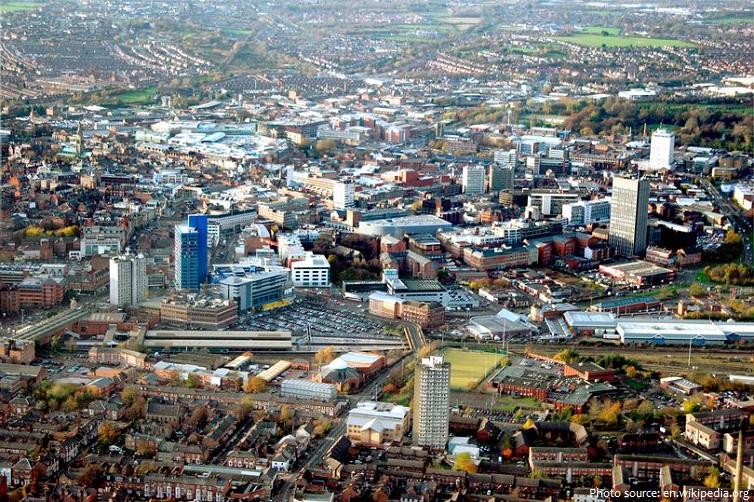 Leicester is one of the oldest cities in England, with a history going back at least two millennia.

It was the site of a prominent Roman settlement – Ratae Corieltauvorum – that marked the point where the Fosse Way (a Roman road) crossed the River Soar. 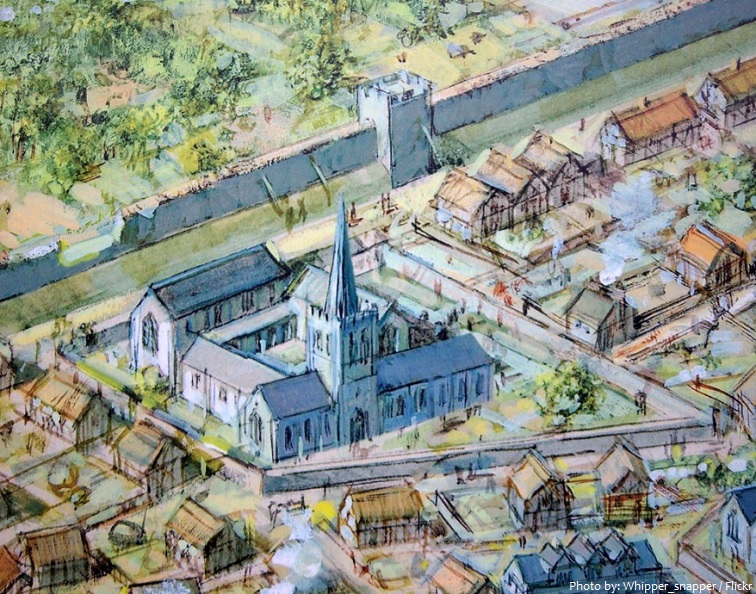 It was an important town during the Middle Ages, but the timber castle that had been constructed by the Normans and later reinforced and expanded with stone had fallen into disrepair by the time Richard III visited the city prior to the Battle of Bosworth in 1485.

King Richard III’s grave was lost for centuries until 2012 when University of Leicester archaeologists found him underneath a city centre car park. The king now lies in Leicester Cathedral, where you can visit his tomb before going across the road to the King Richard III Visitor Centre which tells the amazing story of his discovery. 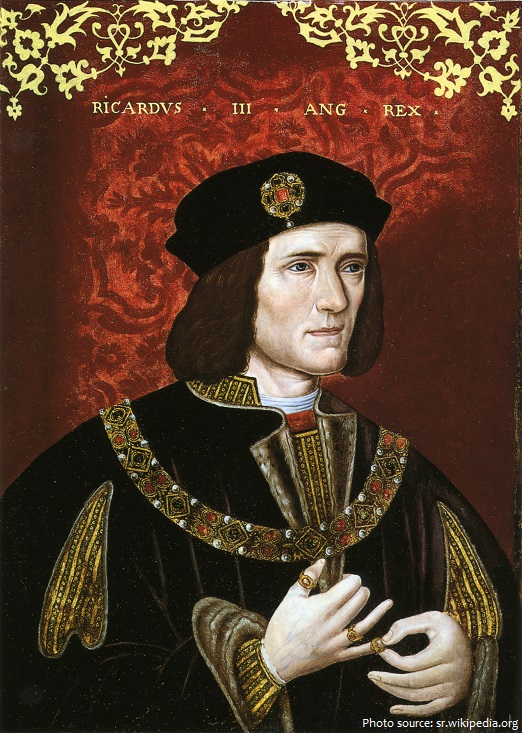 The Grand Union Canal linked Leicester to London in the early 19th century, and later, in 1832, the railway joined the town with the small Leicestershire coalfield to the northwest. Rapid industrial development followed. The city’s oldest industry is hosiery and knitwear, but in the 19th century Leicester became famous for footwear manufacture. Light engineering followed.

Although Leicester lost its city status in the 11th century, a royal charter of incorporation was granted in 1589, and in 1919 it was again officially recognized as a city. 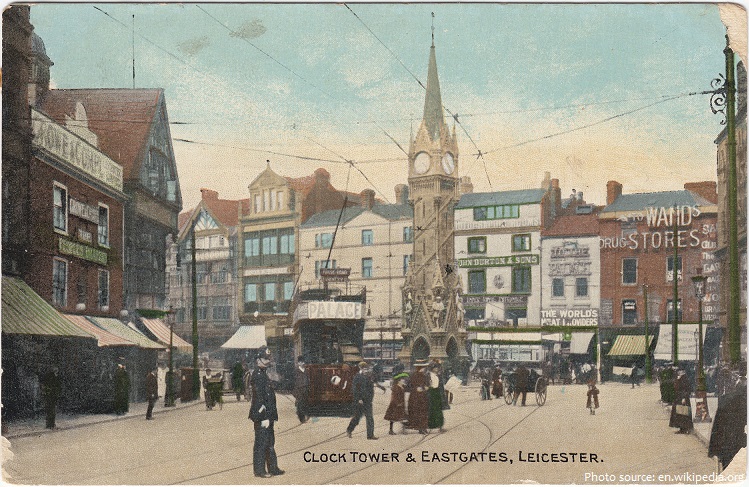 During the 20th century, Leicester experienced large-scale immigration, and it became one of Britain’s most ethnically diverse cities.

The Cathedral Church of Saint Martin, Leicester, commonly known as Leicester Cathedral, is a Church of England cathedral in Leicester and the seat of the Bishop of Leicester. The church was elevated to a collegiate church in 1922 and made a cathedral in 1927 following the establishment of a new Diocese of Leicester in 1926. The remains of King Richard III were reburied in the cathedral in 2015. 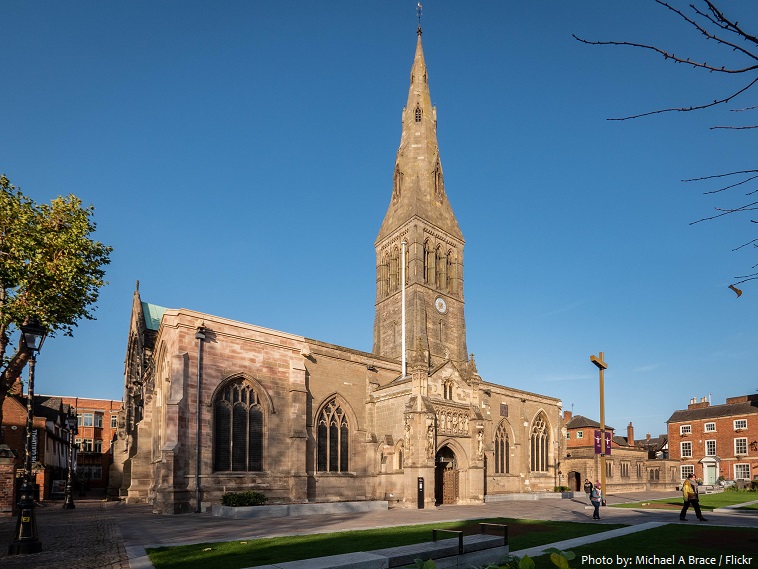 King Richard III Visitor Centre is an establishment that showcases the life of King Richard III and the story of how his remains were discovered in 2012. The centre opened in 2014 on the site of Greyfriars, the medieval friary where the King was originally buried. 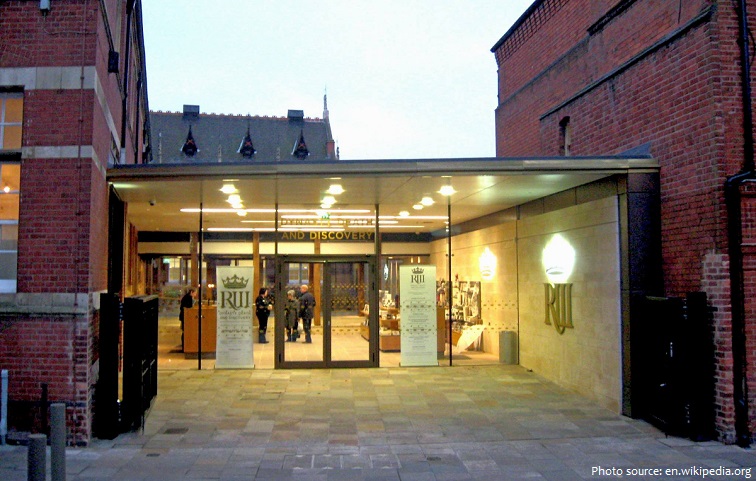 St Nicholas Church is the oldest place of worship in the city. Parts of the church certainly date from about 880 AD, and a recent architectural survey suggested possible Roman building work. The tower is Norman. By 1825 the church was in an extremely poor condition, and plans were made for its demolition. Instead, it was extensively renovated between 1875 and 1884, including the building of a new north aisle. 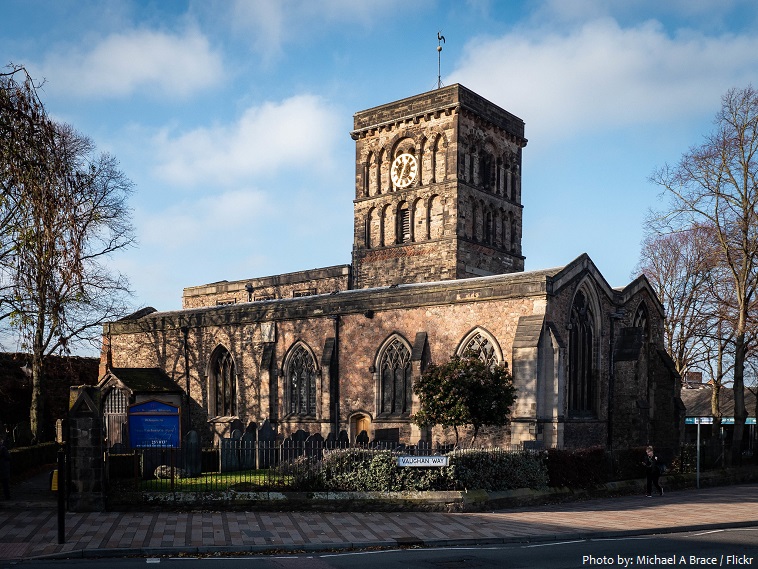 The Jewry Wall Museum is a museum in Leicester. It was built in the 1960s, facing the Jewry Wall ruins in a building shared with Vaughan College. It housed artefacts from Iron Age, Roman, and medieval Leicester. With the ending of Vaughan College’s use of the building in 2013, the whole site was acquired by the city council, and expansion and improvement plans were put in place. 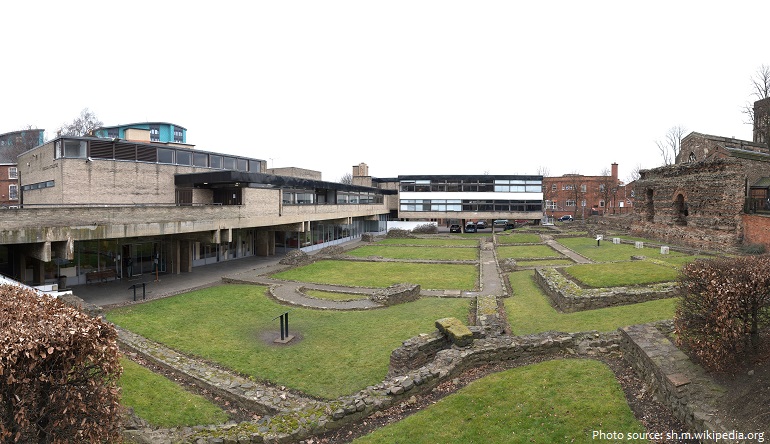 The New Walk Museum and Art Gallery is a museum on New Walk, not far from the city centre. It opened in 1849 as one of the first public museums in the United Kingdom. New Walk contains displays of science, history and art, both international and local. The original building was designed by Joseph Hansom, designer of the hansom cab. 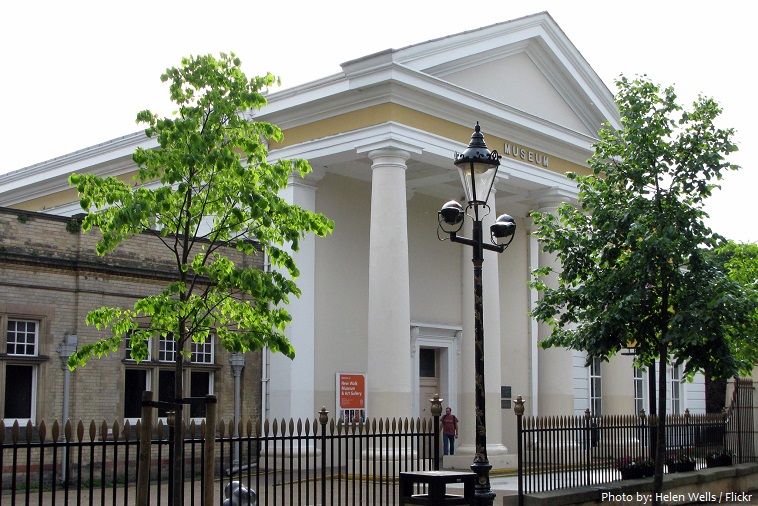 The National Space Centre is a museum and educational resource covering the fields of space science and astronomy, along with a space research programme in partnership with the University of Leicester. Many of the exhibits, including upright rockets, are housed in a tower with minimal steel supports and a semi-transparent cladding of ETFE ‘pillows’ which has become one of Leicester’s most recognisable landmarks. 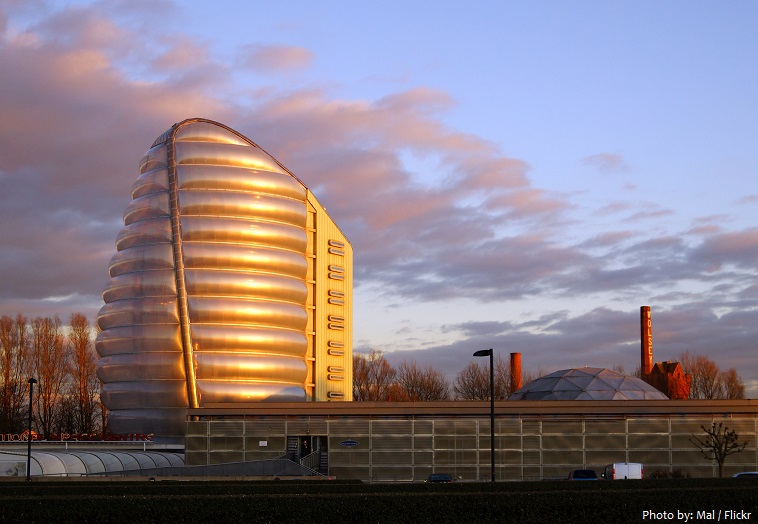 The Abbey Pumping Station is a museum of science and technology in Leicester, on Corporation Road, next to the National Space Centre. With four working steam-powered beam engines from its time as a sewage pumping station, it also houses exhibits for transport, public health, light and optics, toys and civil engineering. 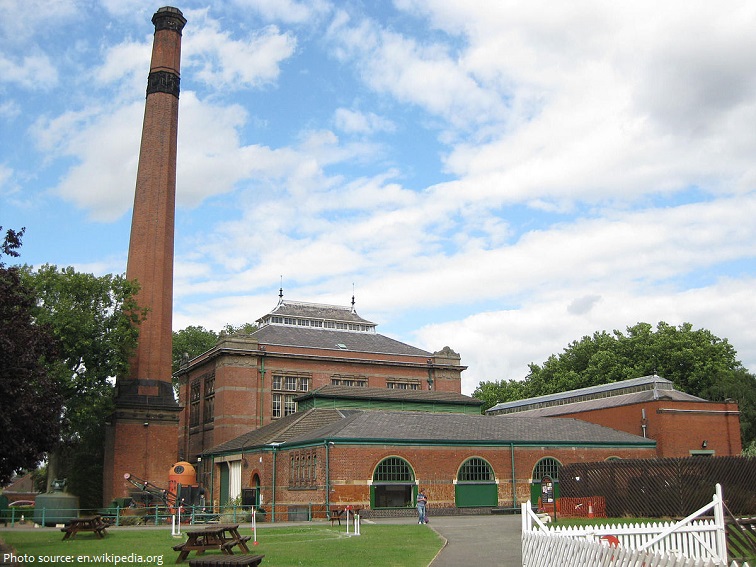 The Guildhall in Leicester is a timber framed building, with the earliest part dating from c. 1390. The Guildhall once acted as the town hall for the city until the current one was commissioned in 1876. It is located in the old walled city, on a street now known as Guildhall Lane. It was used first as the meeting place for the Guild of Corpus Christi and then later for the more formal Corporation of Leicester. The hall was used for many purposes, including council meetings, feasts, as a courtroom, and for theatrical performances; the ultimatum given to the city during English Civil War was discussed here. 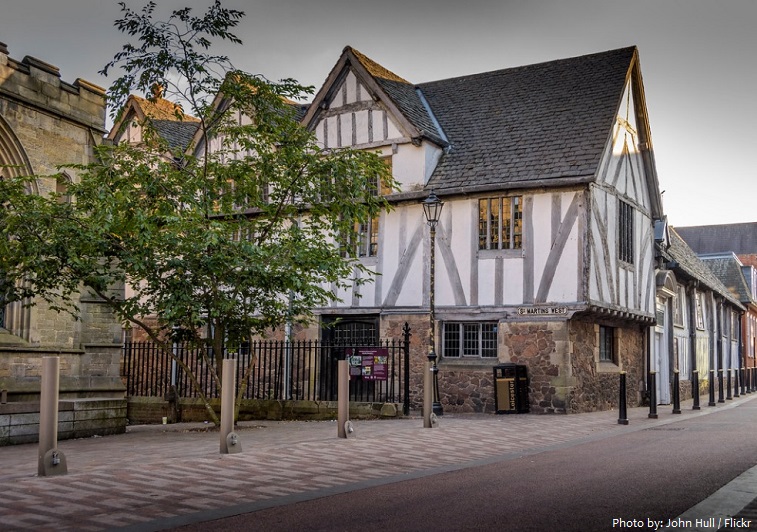 The Haymarket Memorial Clock Tower is a major landmark and popular meeting point in Leicester. It was constructed in 1868. The clock tower was built mostly in Ketton stone with a base of Mountsorrel granite, and incorporates column shafts made of polished Peterhead granite and serpentine. It is located roughly in the middle of the area inside the ring-road, and is at the point where five major streets meet. 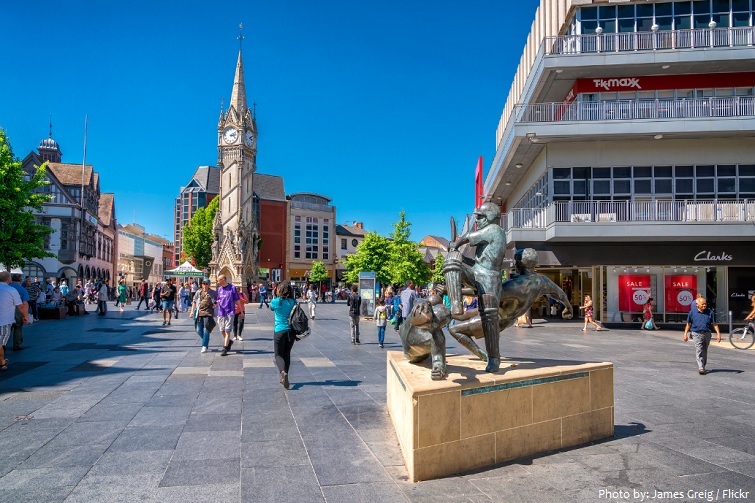 Leicester Market is a market on Market Place just south of the clock tower. It is around 800 years old and was moved to the current site around 700 years ago. It is the largest outdoor covered market in Europe. The market is protected by a Royal Charter that goes back to its origin over 700 years ago. This prohibits other markets from operating within a specified distance (6​2⁄3 miles) of the Leicester market. 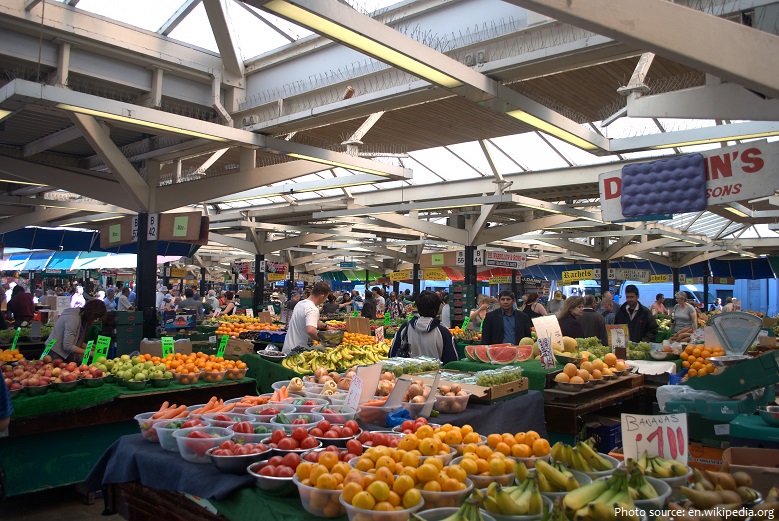 Abbey Park is a public park through which the River Soar flows. It is owned and managed by Leicester City Council. It opened in 1882 on the flood plain of the River Soar, and expanded in 1932 to include the area west of the river that had formerly been the medieval St Mary’s Abbey, still bounded by large medieval walls. The park includes the archaeological sites of the Abbey and the ruins of Cavendish House, along with a wide range of decorative and recreational parkland features. 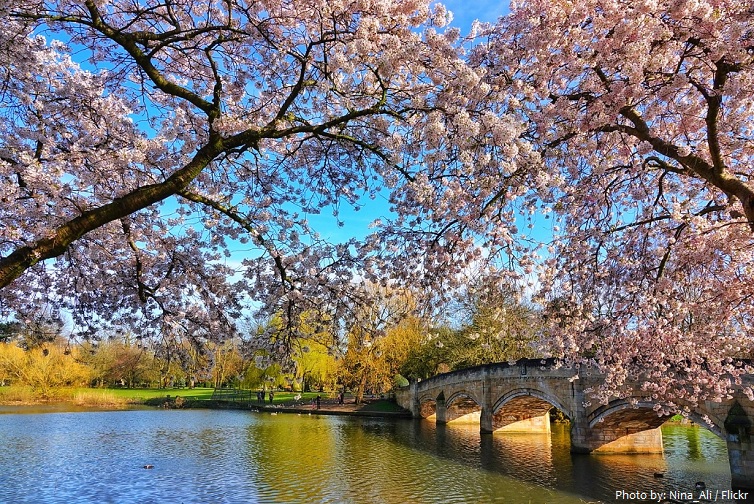 Among the city’s cultural venues are Curve Theatre (opened 2008) and De Montfort Hall.

Leicester Riders are the oldest professional basketball team in the country.