Leeds is the largest city in the county of West Yorkshire in Northern England.

The city is located 270 kilometers (170 miles) north-northwest of London, on the valley of the River Aire in the eastern foothills of the Pennines.

The average altitude is 63 metres (206 feet) above sea level. 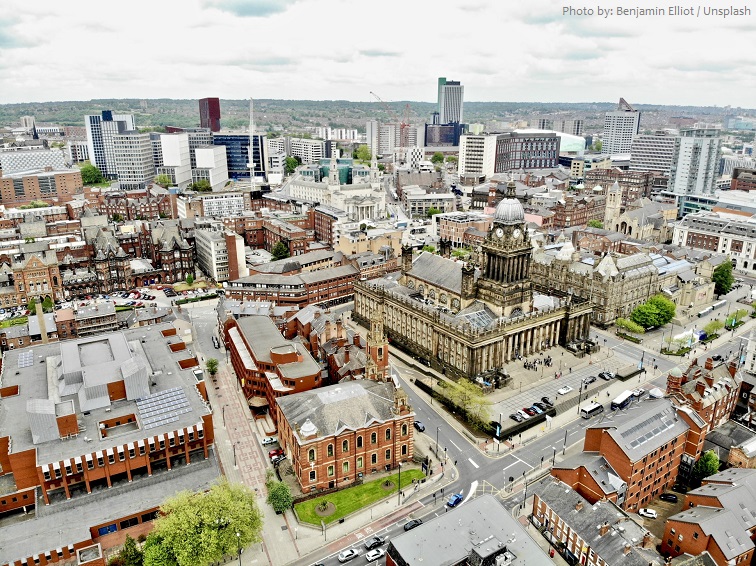 Loidis, from which Leeds derives its name, was anciently a forested area of the Celtic kingdom of Elmet.

The settlement certainly existed at the time of the Norman conquest of England and in 1086 was a thriving manor under the overlordship of Ilbert de Lacy.

It gained its first charter from Maurice de Gant in 1207 yet only grew slowly throughout the medieval and Tudor periods.

The town had become part of the Duchy of Lancaster and reverted to the crown in the medieval period, so was a Royalist stronghold at the start of the English Civil War. 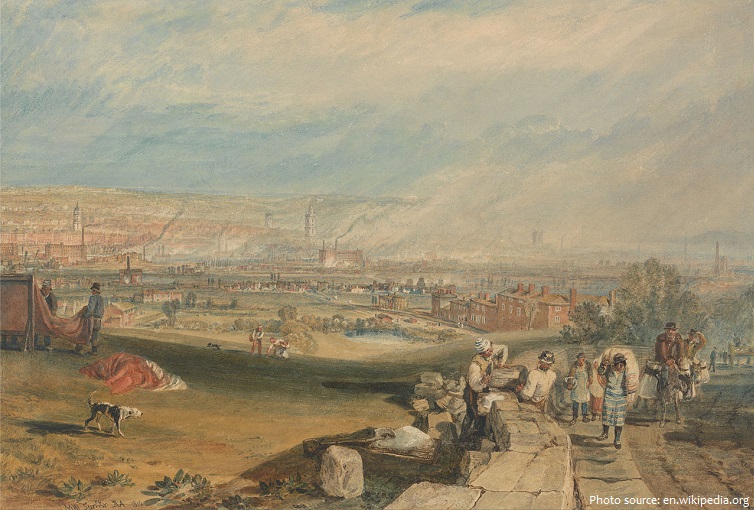 In the 17th and 18th centuries Leeds prospered and expanded as a centre of the woollen industry and it continued to expand rapidly in the Industrial Revolution.

Following a period of post industrial decline in the mid 20th century Leeds’ prosperity revived with the development of tertiary industrial sectors.

Today, Leeds is one of the most cosmopolitan, fast-growing, innovative and prosperous cities in the UK. 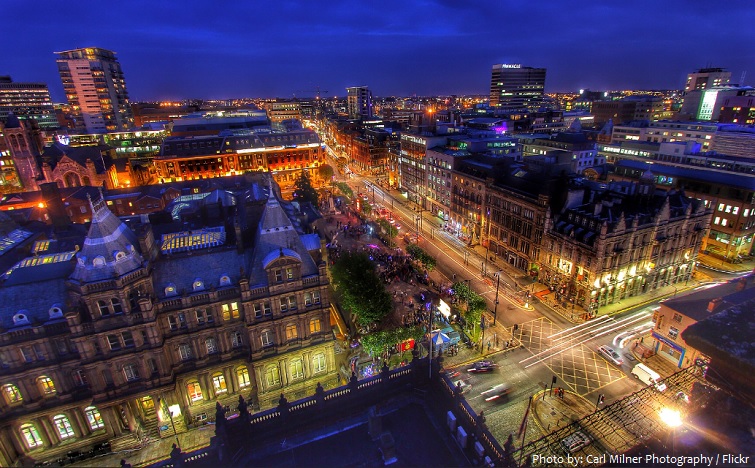 The city is home to a number of historic buildings.

Leeds Town Hall is a 19th century municipal building designed by Cuthbert Brodrick. Planned to include law courts, a council chamber, offices, a public hall, and a suite of ceremonial rooms, it was built between 1853 and 1858. With the building of the Civic Hall in 1933, some of these functions were relocated, and after the construction of the Leeds Crown Court in 1993, the Town Hall now serves mainly as a concert, conference and wedding venue, its offices still used by some council departments. It was designated a Grade I listed building in 1951. 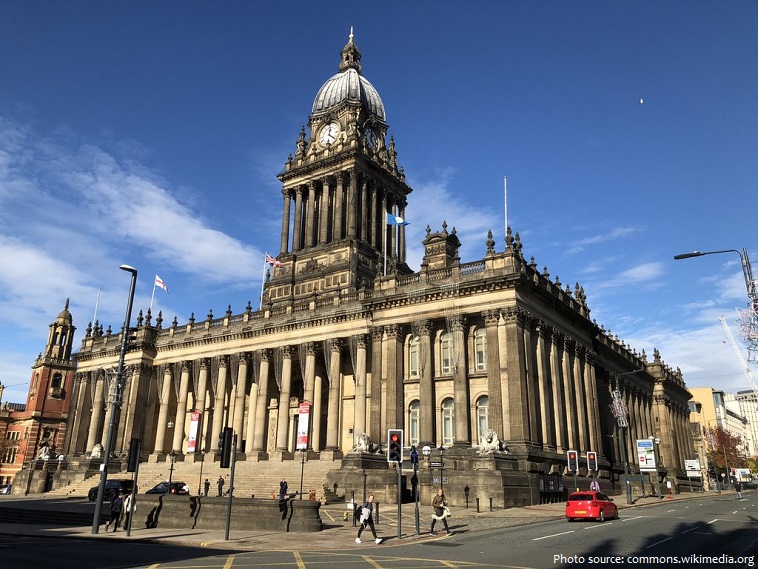 The Leeds Corn Exchange, a masterpiece of Victorian architecture, was also designed by Cuthbert Brodrick. The Corn exchange was built between 1861 and 1863. It is a grade I listed building. 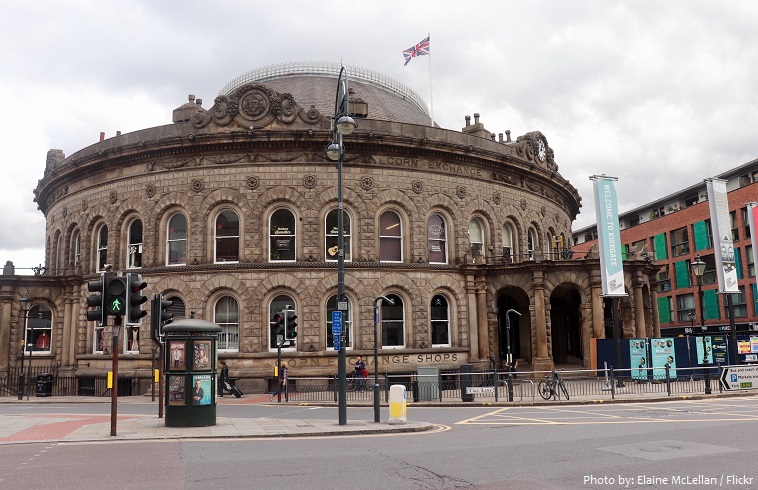 St John the Evangelist’s Church is a redundant Anglican church in the centre of the city of Leeds. It is recorded in the National Heritage List for England as a designated Grade I listed building. It is the oldest church in the city centre of Leeds, being built between 1632 and 1634, at a time when few churches were being built. It was paid for by John Harrison, who was a wealthy wool merchant and local benefactor. 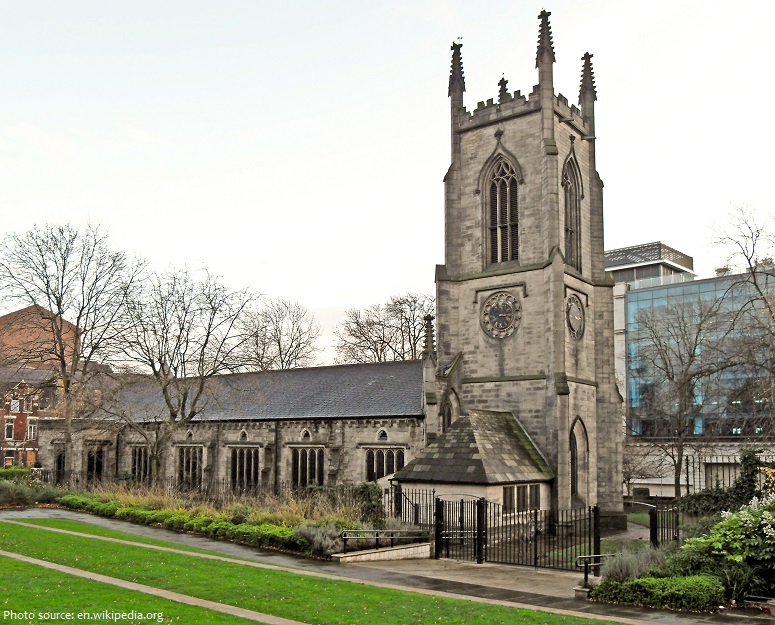 Leeds Minster is a large Church of England foundation of major architectural and liturgical significance. A church is recorded on the site as early as the 7th century, although the present structure is a Gothic Revival one, dating from the mid-19th century. It is dedicated to Saint Peter and was the Parish Church of Leeds before becoming a Minster in 2012. It has been designated a grade I listed building by English Heritage. 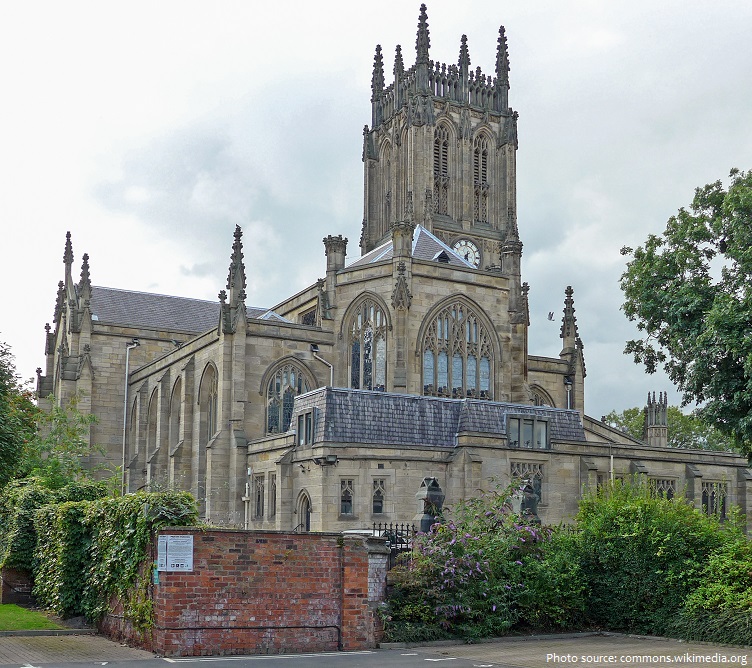 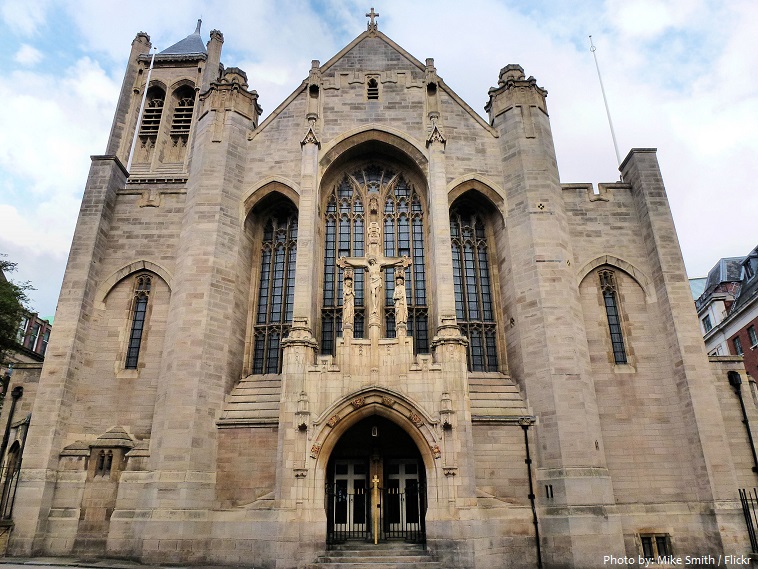 City Square is a central public square ringed by historic buildings and dotted with intriguing monuments. The only building with a direct frontage is the former General Post Office, on the north-west side – it is a Grade II listed building, in classical style by architect Sir Henry Tanner. 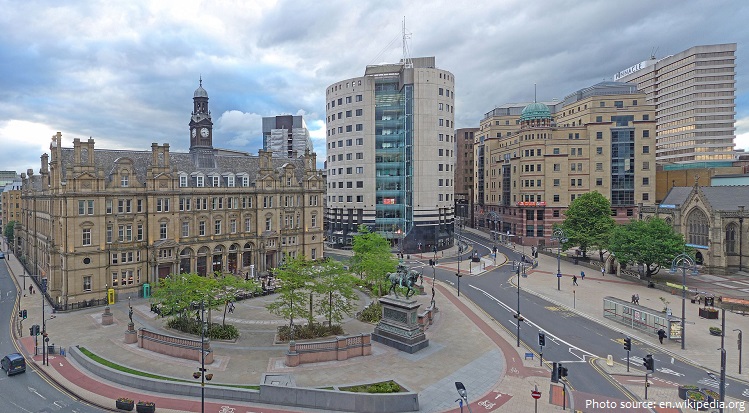 Roundhay Park is one of the biggest city parks in Europe. It covers more than 280 hectares (700 acres) of parkland, lakes, woodland and gardens which are owned by Leeds City Council. The park is one of the most popular attractions in Leeds, about a million people visit each year.

Salts Mill is a former textile mill, now an art gallery, shopping centre, and restaurant complex. It was built by Sir Titus Salt in 1853, and the present-day 1853 Gallery takes its name from the date of the building which houses it. The mill has many paintings by the local artist David Hockney on display and also provides offices for Pace plc. 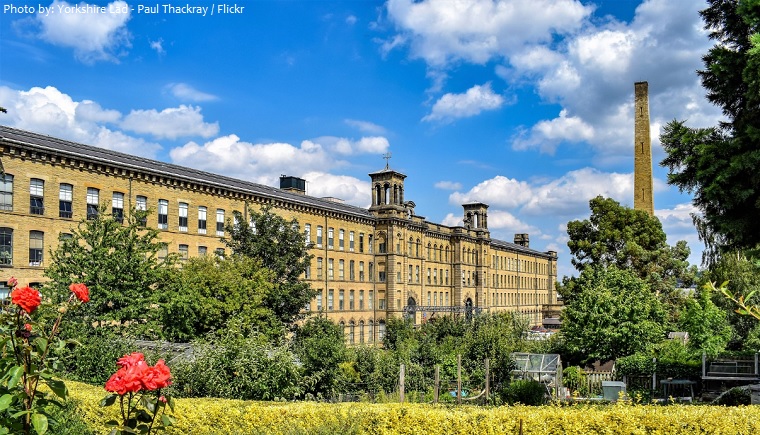 Leeds Art Gallery is a gallery whose collection of 20th-century British Art was designated by the British government in 1997 as a collection “of national importance”. Its collection also includes 19th-century and earlier art works. It is a grade II listed building 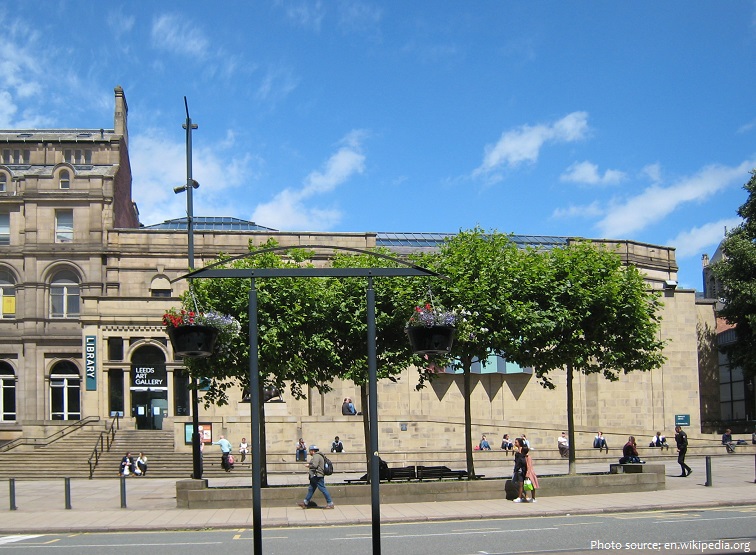 The Royal Armouries Museum is a national museum which displays the National Collection of Arms and Armour. The museum covers some 3,000 years of armor and weaponry from across the globe. It is part of the Royal Armouries family of museums. 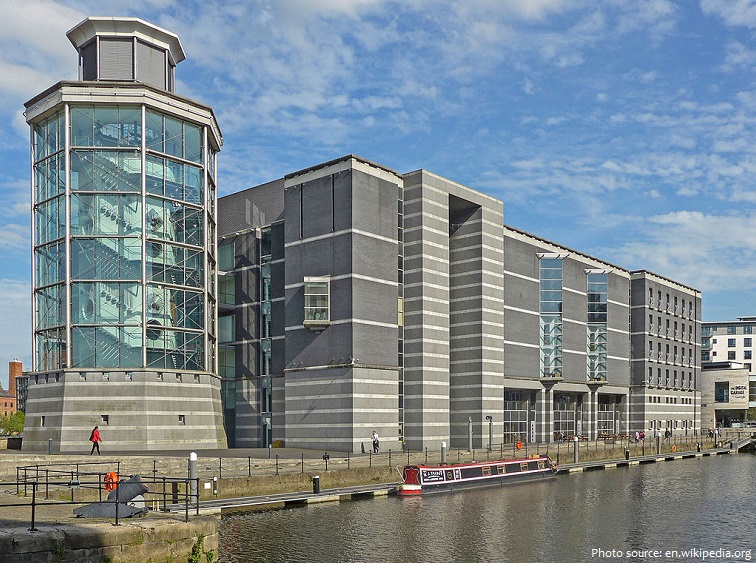 Kirkstall Abbey is a ruined Cistercian monastery in Kirkstall, north-west of Leeds city centre. It is set in a public park on the north bank of the River Aire. It was founded c.1152. It was disestablished during the Dissolution of the Monasteries under Henry VIII. The picturesque ruins have been drawn and painted by artists such as J.M.W. Turner, Thomas Girtin and John Sell Cotman. 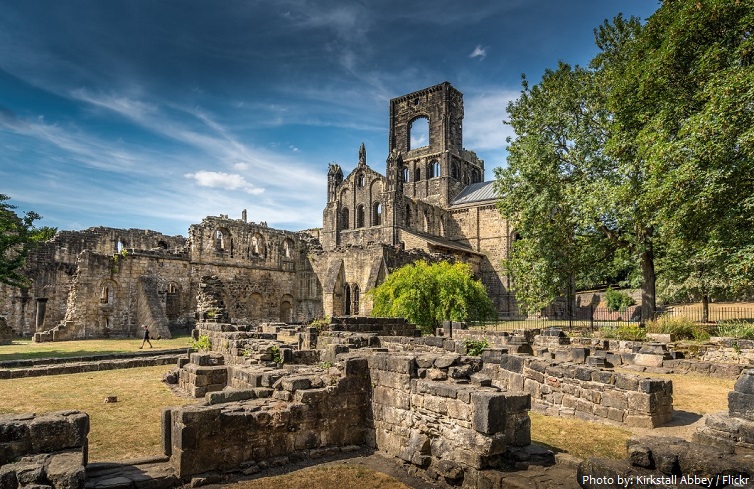 Harewood House is a country house near Leeds. Designed by architects John Carr and Robert Adam, it was built, between 1759 and 1771, for Edwin Lascelles, 1st Baron Harewood. The landscape was designed by Lancelot “Capability” Brown and spans 400 hectares (1,000 acres). he house is a Grade I listed building and a number of features in the grounds and courtyard have been listed as Grade I, II and II*. 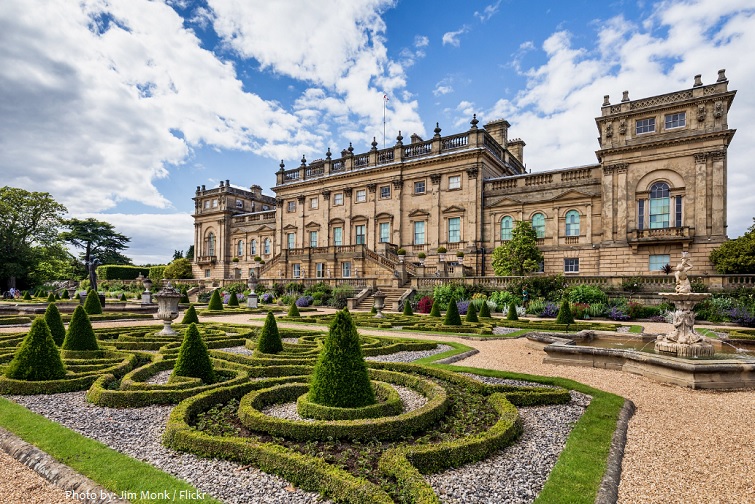 JRR Tolkein was a reader and professor at University of Leeds.

An inhabitant of Leeds is locally known as a Loiner, possibly derived from Loidis.

Roundhay Garden Scene is an 1888 short silent actuality film recorded by French inventor Louis Le Prince. Filmed at Oakwood Grange in Roundhay, Leeds. The footage is believed to be the oldest surviving film in existence.

The oldest known rum is The Harewood Rum 1780, believed to have been distilled in 1780 in Barbados. In 2011, fifty-nine bottles of the previously-forgotten rum were discovered in the basement of Harewood House, Leeds.