It is most famous by its beautiful colors that have been created via selective breeding.

There are more than 20 varieties of koi fish that differ in color, patterns and type of scales. New koi varieties are still being actively developed.

Koi fish have a typical life span ranging from 30 to 60 years. There are authenticated cases, however, in which koi have lived over 200 years. 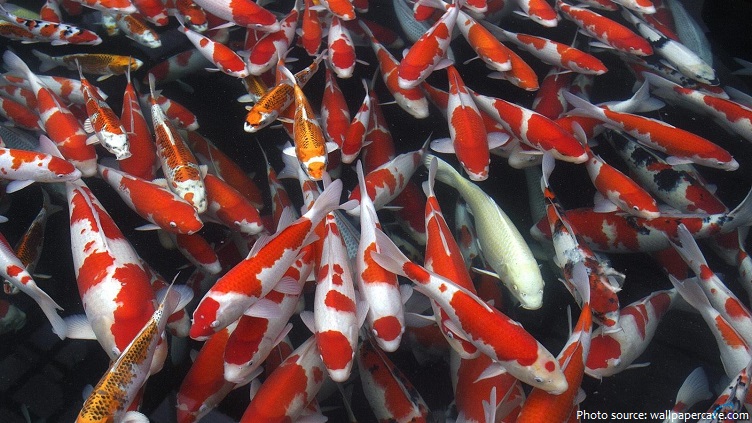 A legendary koi named Hanako lived to be the oldest koi of all recorded history. Hanako was hatched in 1751 and lived to the ripe old age of 226, passing away in 1977.

Koi’s size is determined by the environment the koi are raised in, diet and genetics. Most koi will break 61 centimeters (24 inches) inside of 5 years. Anything over 76 centimeters (30 inches) is considered “jumbo” and many Grand Champions have been 91 centimeters+ (36 inches+). But many times koi will not even break 50 centimeters (20 inches). Often times koi are kept in smaller ponds with less then ideal water quality and they never get bigger then 35 centimeters (14 inches). 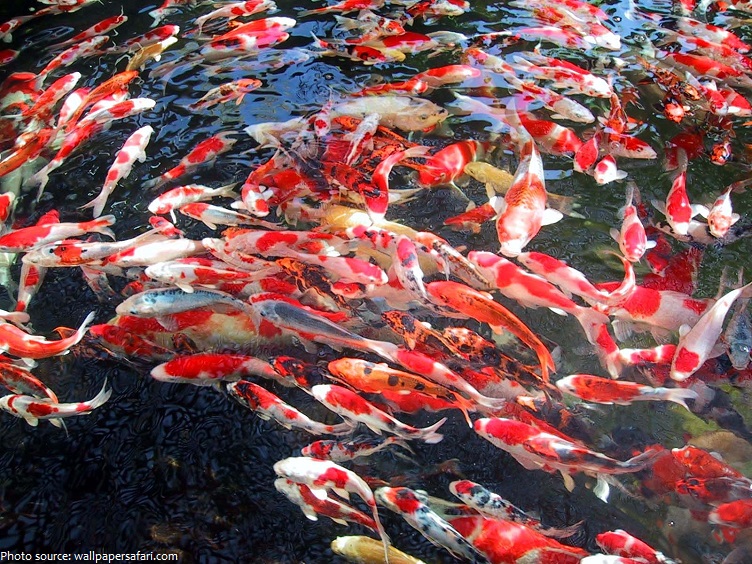 Color of the koi fish depends on the variety. Some of the major colors are white, black, red, yellow, blue, and cream.

While the possible colors are virtually limitless, breeders have identified and named a number of specific
categories. The most notable category is Gosanke, which is made up of the Kohaku, Taisho Sanshoku,and Showa Sanshoku varieties.

Koi are an omnivorous fish, and will eat a wide variety of foods including insects, snails, worms, algae, plants and fruit. Koi food is designed not only to be nutritionally balanced, but also to float so as to encourage them to come to the surface. 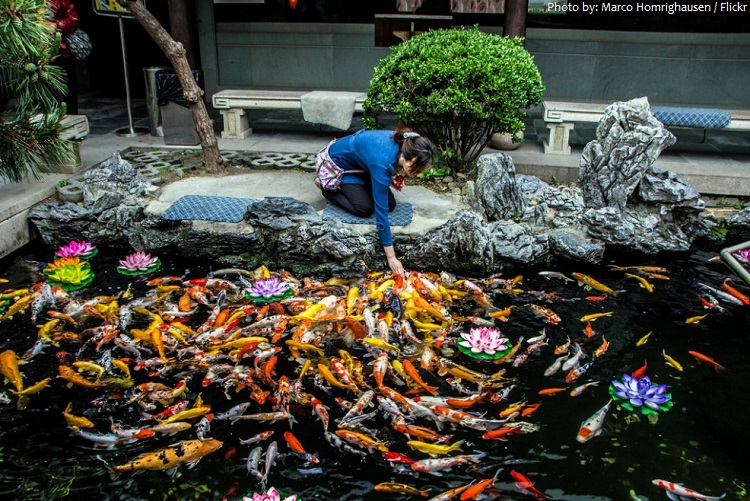 Koi fish will recognize the persons feeding them and gather around them at feeding times. They can be trained to take food from one’s hand.

Koi (and many other fish) go into a sort of dormancy in the winter, using less oxygen and naturally settling to the bottom of the pond where the water is warmer.

Koi fish are sensitive to the sun. As weird as it may sound they may get sunburns if they live in the ponds that do not provide enough shadow. 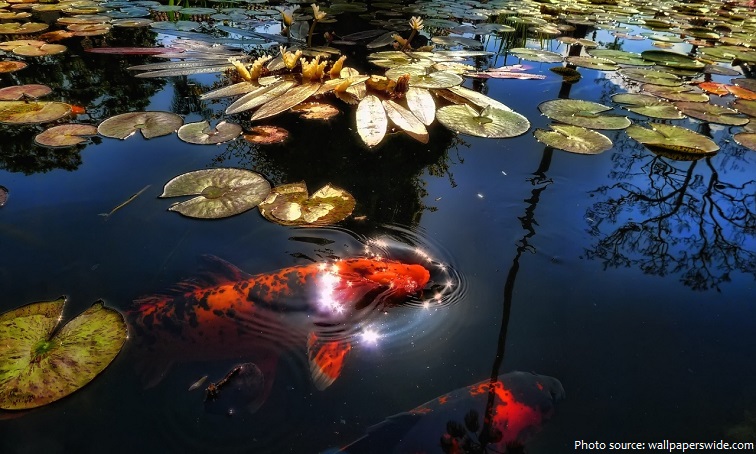 Like most fish, koi reproduce through spawning in which a female lays a vast number of eggs and one or more males fertilize them.

Koi will produce thousands of offspring from a single spawning. But the large majority of these offspring, even from the best champion-grade koi, will not be acceptable as koi (they have no interesting colors) or may even be genetically defective.

Koi have been accidentally or deliberately released into the wild in every continent except Antarctica. They quickly revert to the natural coloration of common carp within a few generations. In many areas, they are considered an invasive species and pests. 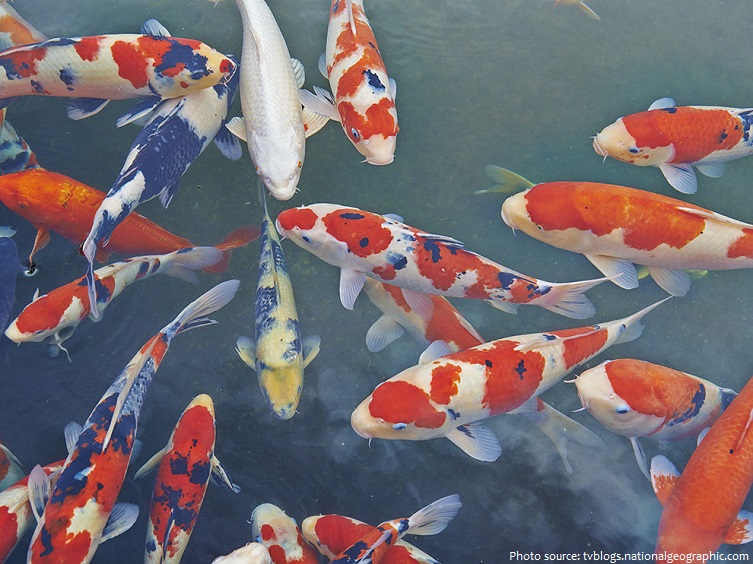 In Japanese, koi is a homophone for another word that means “affection” or “love“.

Exactly how much Koi fish cost depends on a number of factors, including the size and the specific breed of the fish. A small, standard Koi fish costs as little as $4. Koi that are larger in size can cost up to $3,000.

The best are breeder certified, meaning they have fairly stable bloodlines (genes) that offer some certainty of passing on their primary color characteristics. These fish can easily cost $10,000 and up. 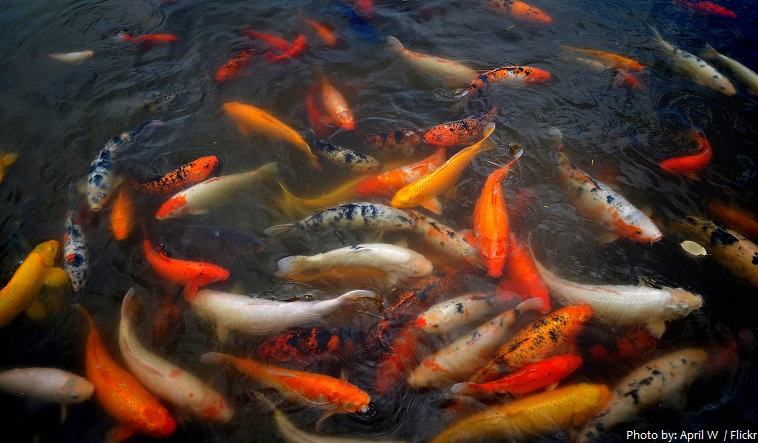 One exceptional single colored metallic Koi created in the 1980’s was purchased by a Japanese company as the most expensive Koi ever sold for $2.2 million in today’s dollars. Its body shimmered like solid gold. These highly developed Koi are considered living art and owning the most expensive Koi is a major status symbol compared to owning a collection of Impressionist paintings.

Its popularity is increasing day by day due to their gorgeous color patterns and easy to care for.

Koi fish can have many symbolic meanings, with two of the most popular being good fortune and overcoming adversity. The symbolism of the Koi fish comes from the legend that a Koi fish that is able to swim upstream and all the way up the Yellow River falls will be rewarded by being turned into a dragon. The Koi fish is a popular tattoo design. 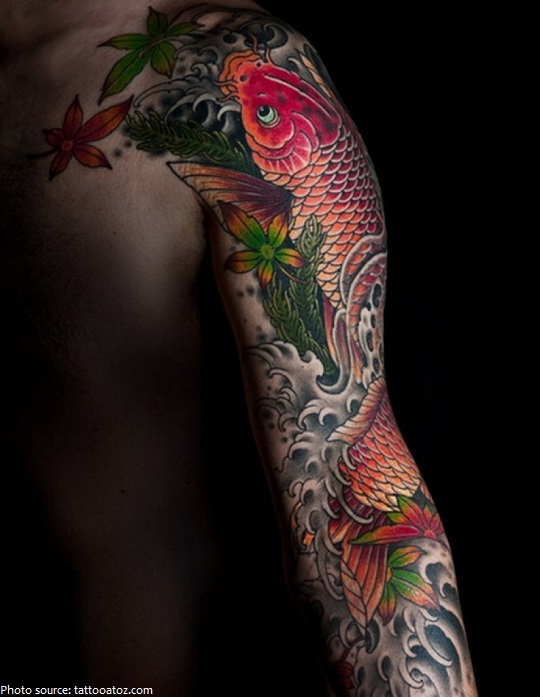 Because koi fish can develop such an array of colors, it comes as no surprise that each hue has developed a connotation. Gold koi fish represent wealth and prosperity. Metallic koi symbolize success in business.A red koi represents love. A blue koi is thought to bring serenity. Asagi koi of blue, red, and grey colorings symbolize positivity. Black koi are thought to hold a patriarchal symbolism, with red belonging to the mother, blue to the son, and pink to the daughter.