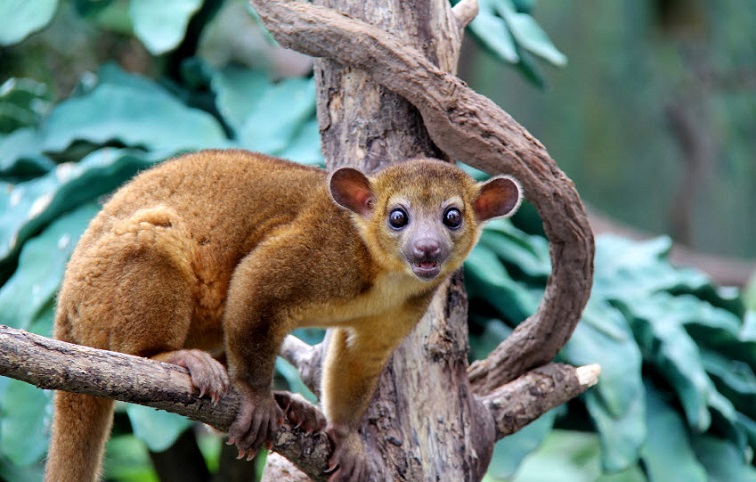 It is the only species of the genus Potos.

Kinkajous live in the tropical forests of Central and South America.

Kinkajous range from east and south of the Sierra Madres in Mexico, throughout Central America to Bolivia east of the Andes and the Atlantic Forest of southeastern Brazil.

The average lifespan of a kinkajou is about 20 years in the wild and up to 41 in captivity. Kinkajous are arboreal and possess many adaptations common to arboreal species, such as a long, fully prehensile tail, nimble clawed fingers, and fully reversible hind feet.

It has soft, gray or brownish fur and large eyes set in a small, round face.

The eyes are highly reflective of light, giving them a bright orange eyeshine. The kinkajou’s feet can be rotated 180° and have a thick covering of short hair on the soles.

A nocturnal animal, the kinkajou’s peak activity is usually between about 7:00 PM and midnight, and again an hour before dawn. During daylight hours, kinkajous sleep in tree hollows or in shaded tangles of leaves, avoiding direct sunlight.

Although the kinkajou is classified in the order Carnivora and has sharp teeth, its omnivorous diet consists mainly of fruit, particularly figs. Studies have shown that 90% of their diet consists of (primarily ripe) fruit. Leaves, flowers, and various herbs make up much of the other 10% of their diet. On rare occasions they eat eggs, hatchlings, insects, and small vertebrates. Kinkajous are important pollinators. As they travel from flower to flower to drink nectar, the flower’s pollen sticks to their face and then smears off at the next flower.

Kinkajous live in small social groups that usually consist of two males, one female, and related offspring. Members of the same group sleep together during the day in a shared nest or den and emerge at dusk to groom and socialize. They wander off to feed alone for most of the night but come back together in the morning to sleep.

Kinkajous are highly vocal, emitting screams, barks, and a variety of softer sounds, including some described as “sneezes.”

Kinkajous breed throughout the year, giving birth to one or occasionally two small babies after a gestation period of 112 to 118 days. A mother kinkajou takes full responsibility for caring for her young(s). After one or two weeks, the baby’s eyes open. It begins to eat solid food at eight weeks. By this time, the youngster can hang by its tail. It is able to climb with confidence when about three months old. Their predators include diurnal birds of prey, which take sleeping kinkajous from tree tops, foxes, tayras, jaguarundi, jaguar, ocelot, margay, and people, who hunt them for their meat and fur.

The kinkajou is not an endangered species. However, kinkajous are hunted for the pet trade, for their fur (to make wallets and horse saddles) and for their meat.

Its scientific name Potos flavus roughly translates to golden drinker, as the kinkajou has a golden-brown coat and is fond of nectar.

Serious claws and rounded ears give the kinkajou the nickname “honey bear.”

The kinkajou was originally described to the scientific community as a lemur. Although kinkajous may look like monkeys or ferrets, they are not related to those animals.

They are related to olingos, coatis, raccoons, and the ringtail and cacomistle.

Kinkajous rarely leave the treetops to come down to the ground.

The kinkajou often shows little fear of humans, however it is seldom seen by people because of its strict nocturnal habits.