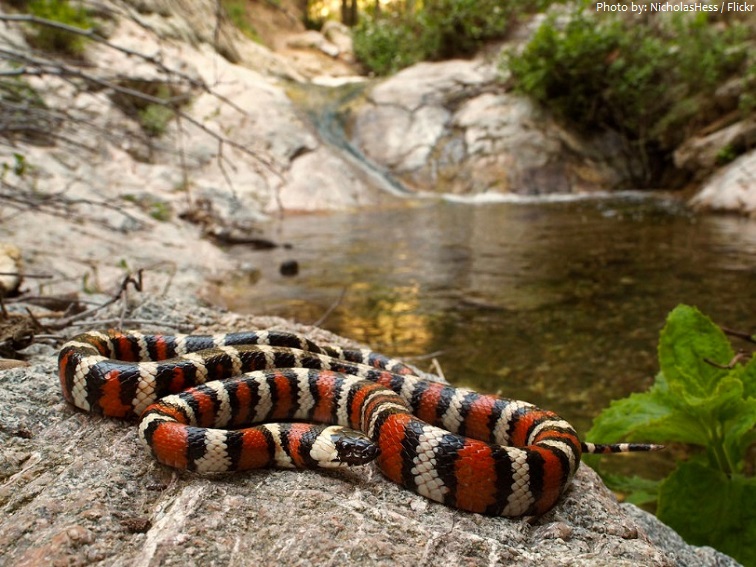 There are 10 species and 45 subspecies of kingsnakes.

They are found throughout most of the United States, the southern parts of Ontario and Quebec, down through Central America and parts of South America.

Kingsnakes inhabit arid deserts, swamplands, farmlands, grasslands, pine and deciduous forests, up to 2,600 meters (8,500 feet) in the Rockies and to 3,050 meters (10,000 feet) in the Andes, and in riparian habitats.

Kingsnakes are a part of the Colubridae family, which is a large family of non-venomous snakes.

Kingsnakes are members of the genus Lampropeltis. Lampropeltis means “shiny shield”, a name given to them in reference to their smooth dorsal scales. 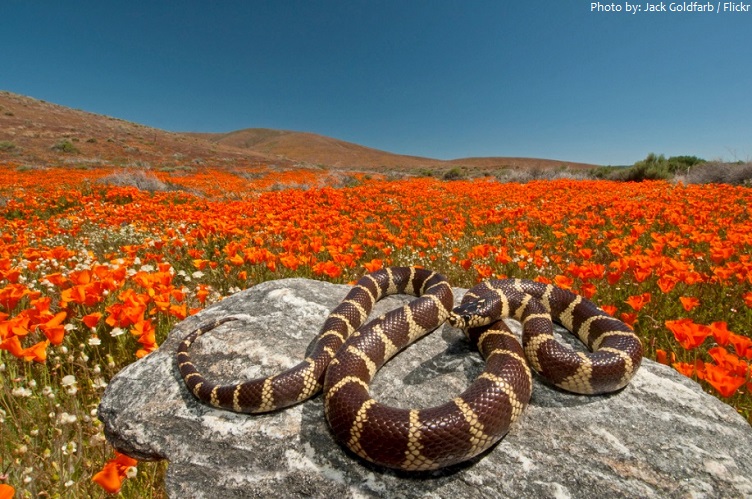 There’s been quite a shake-up in the way kingsnakes are identified by scientists, and that’s because there have been new advancements in molecular biology. Several species that were once lumped into one species have now been identified and classified as their own species. Scarlet kingsnakes were once considered milksnakes, but is now its own species, too.

Kingsnakes are long lived snakes. The lifespan is from 20 to 30 years, depending on the species.

The majority of kingsnakes have quite vibrant patterns on their skins. 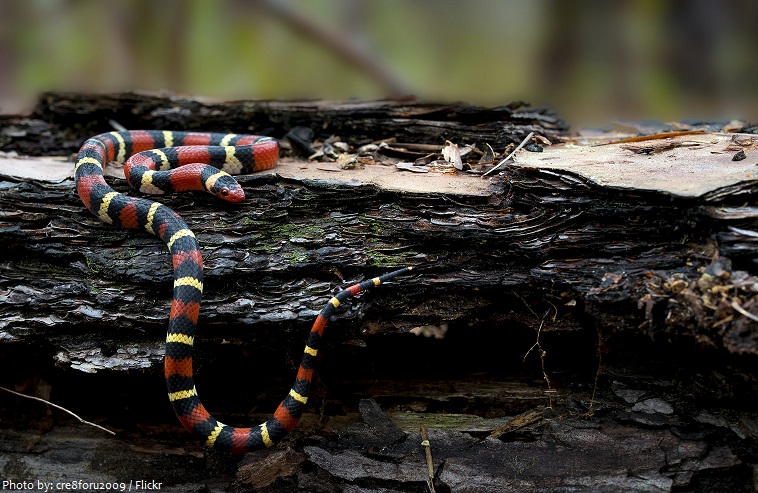 Some species of kingsnake, such as the scarlet kingsnake, Mexican milk snake, and red milk snake, have coloration and patterning that can cause them to be confused with the highly venomous coral snakes. There is a rhyme to help you tell a deadly coral snake from its nonvenomous look-alike: “Red on black, friend of Jack; Red on yellow, kill a fellow.”

Kingsnakes have round pupils (just like other non-venomous snakes), rounded jaw and a spoon-shaped head.

Kingsnakes are primarily nocturnal. However, in areas with moderate climates, like Southern California, they may be diurnal. 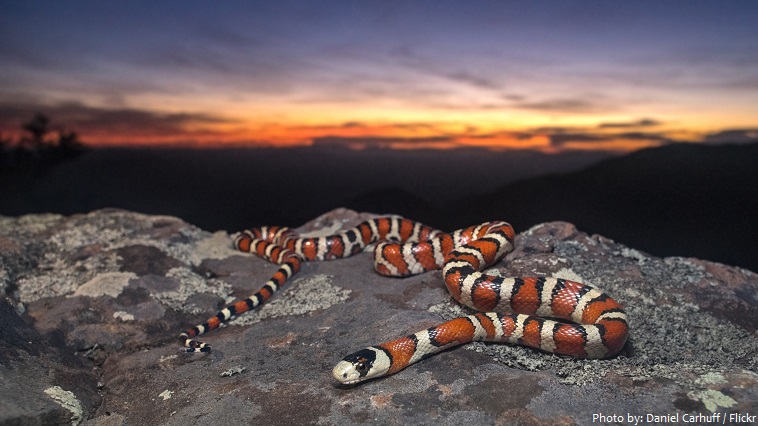 Kingsnakes are active hunters, seeking out prey, not ambush hunters like rattlesnakes.

Kingsnakes use constriction to kill their prey and tend to be opportunistic when it comes to their diet; they will eat other snakes, including venomous snakes.

The “king” in the name (as with the king cobra) refers to this preying on other snakes.

Besides eating other snakes, kingsnakes also eat lizards, rodents, birds, and eggs, counting on their strong stomach acid to dissolve their prey. 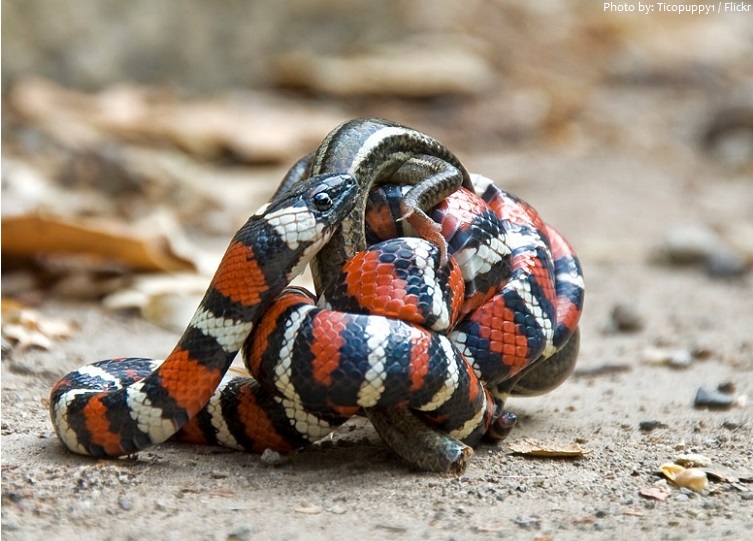 Depending on the size of the meal, the kingsnake may not eat again for several days.

Almost all reptiles, including kingsnakes, are cold-blooded. As cold-blooded creatures, rattlers depend on the sun to warm them up to optimal temperatures and shady places to cool off.

During the fall, most kingsnakes find a place to hibernate until spring, unless they live in a warmer climate.

Scientists don’t know much about how kingsnakes communicate. They use scent glands for mating and to repel other snakes. They also use tongue flicks to sense chemical signals. Like most snakes, they have excellent vision. They can’t “hear,” but they are very sensitive to vibrations.

Like other non-venomous snakes, kingsnakes are oviparous, which means that they lay eggs. 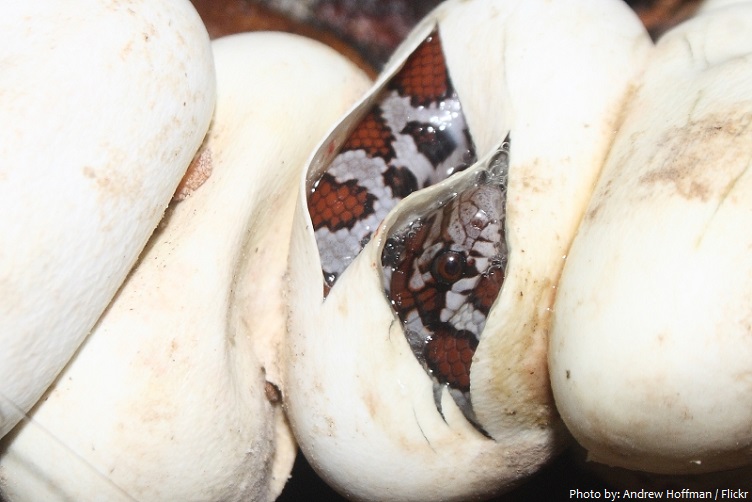 An adult female lays a clutch of eggs under leaves in the ground or a rotting log and leaves the eggs, which hatch unattended 2 to 3 months later. Hatchlings rage in size from 10 to 30 centimeters (4 to 12 inches). They are completely independent from the moment it breaks out of the shell.

Their natural predators include hawks, eagles, coyotes, raccoons, foxes, skunks, bobcats, and even other kingsnakes.

One kingsnake species is the milksnake (Lampropeltis triangulum), also known as a tricolor or tricolored king. A common myth about milksnakes is that they suck the milk out of a cow’s udders! Many milksnakes are indeed found in barns, but they are looking for mice, not milk. 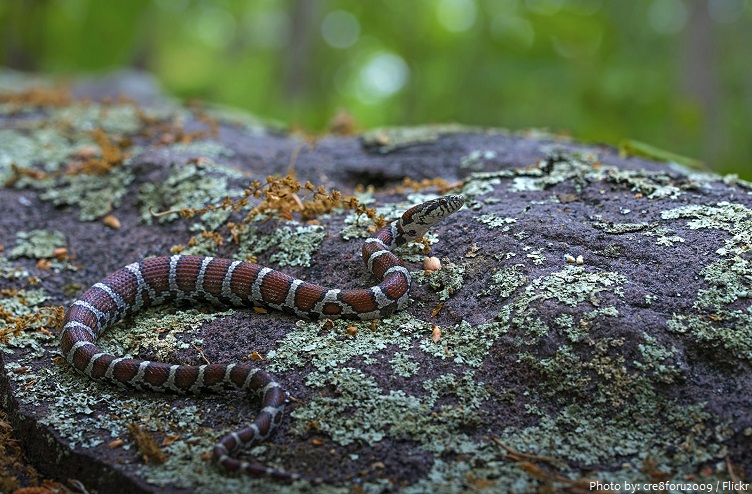 Kingsnakes such as the California kingsnake (Lampropeltis getula californiae) can exert twice as much constriction force relative to body size as ratsnakes and pythons. Scientists believe such strong coils may be an adaptation to snake and other reptile prey, which can sustain lower blood-oxygen levels before asphyxiating.

The black kingsnakes (Lampropeltis nigra) appear almost solidly jet black, but they have traces of white or yellow spots or bands and sometimes white throats.

Most species of kingsnakes are not endangered, though the populations of some are decreasing, according to the International Union for the Conservation of Nature (IUCN).

The Todos Santos Island kingsnake (Lampropeltis herrerae) is at critical risk. This species is found on only one island, Isla Todos Santos, off the coast of Baja California, Mexico.

The State of California considers the San Diego mountain kingsnake (Lampropeltis zonata pulchra) to be vulnerable.

Kingsnakes are one of the most popular and collected species of snakes due to their adaptability as pets and ease of care.

Kingsnake bites do not hurt, but the shock of one might shake you up a little. Kingsnake teeth do not do much damage to your skin, but as it may bleed it is advised that you treat the area with antiseptic to ensure the wound does not become infected. Sometimes a King Snake may bite and refuse to let go. 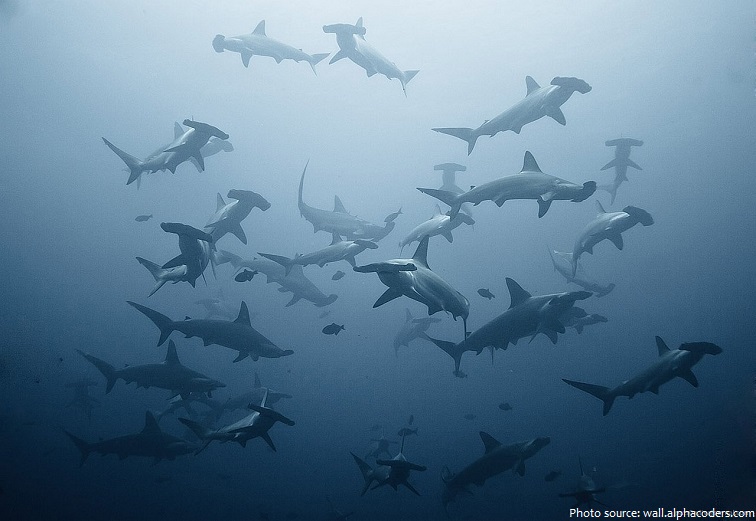 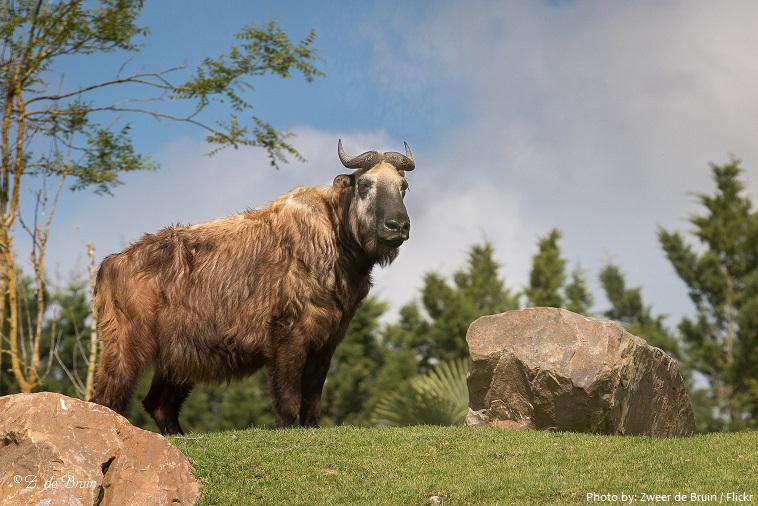 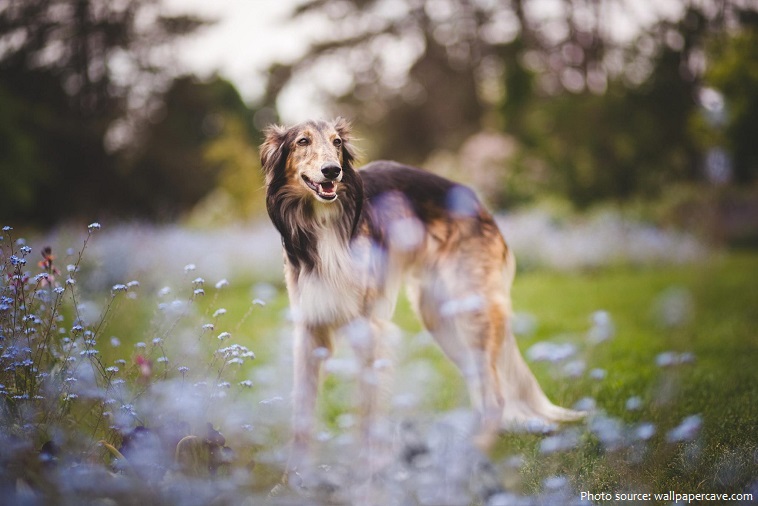