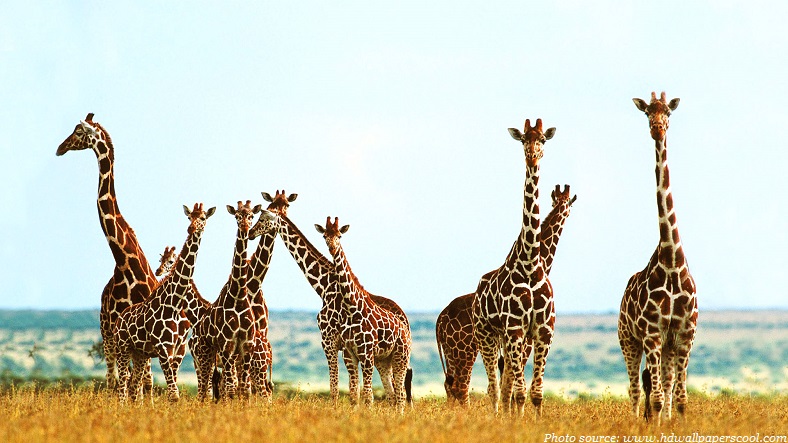 Giraffes live primarily in savanna areas in the sub-Saharan region of Africa.

Giraffe can live to about 25 years in the wild and even longer in captivity.

Their extreme height allows them to eat leaves and shoots located much higher than other animals can reach.

Spending most of the day eating, a full-grown giraffe consumes over 34 kilograms (75 pounds) of leaves and twigs a day.

Giraffes are ruminants. This means that they have more than one stomach. In fact, giraffes have 4 stomachs, the extra stomachs assisting with digesting food.

Female giraffes can become pregnant at 5 years old. They carry a baby for 15 months and give birth while standing up. Newborns are about 2 m (6 ft.) tall and weigh 70 kg (150 lb.). 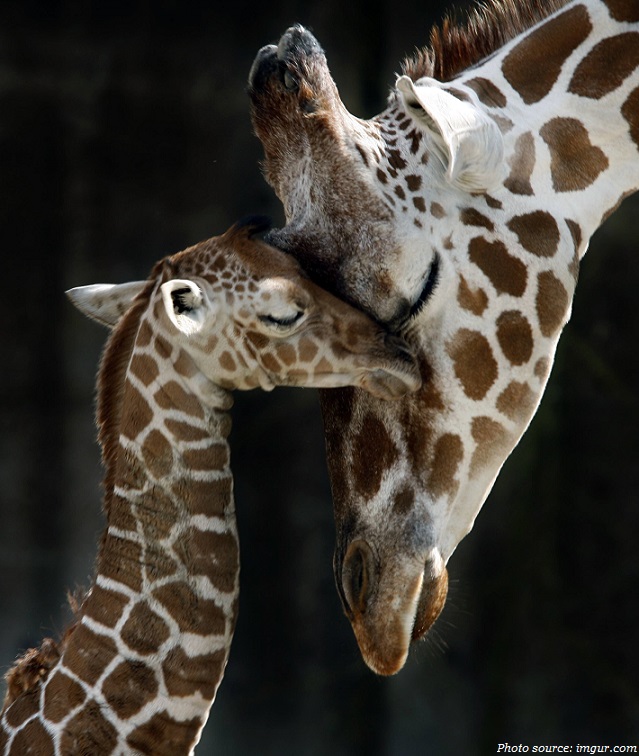 The giraffe calf can stand up and walk after about an hour and after only 10 hours can actually run alongside their family.Within a week, it starts to sample vegetation.

Despite the females’ attempts to stand over their calves during attacks by lions, spotted hyenas, leopards and African wild dogs, many calves are killed in their first few months.

Giraffes use their hooves to get rid of predators, one kick is enough to kill the lion.

They can run as fast as 56 kilometer (35 miles) an hour over short distances, or cruise at 16 kph 10 mph over longer distances.

Male giraffes sometimes fight with their necks over female giraffes. This is called “necking”. The two giraffes stand side by side and one giraffe swings his head and neck, hitting his head against the other giraffe. Sometimes one giraffe is hit to the ground during a combat. 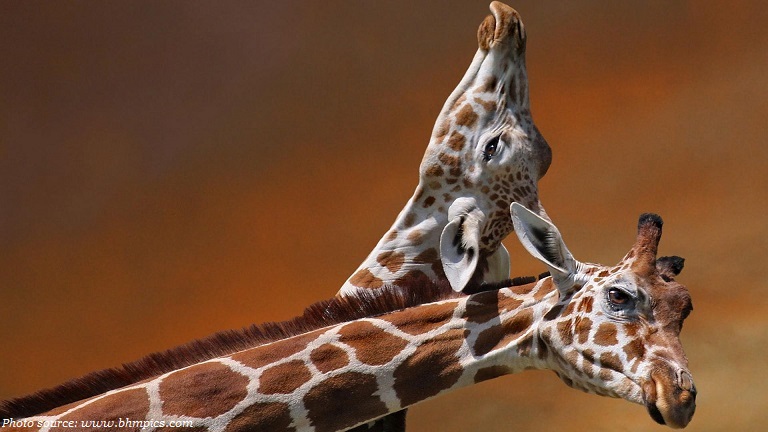 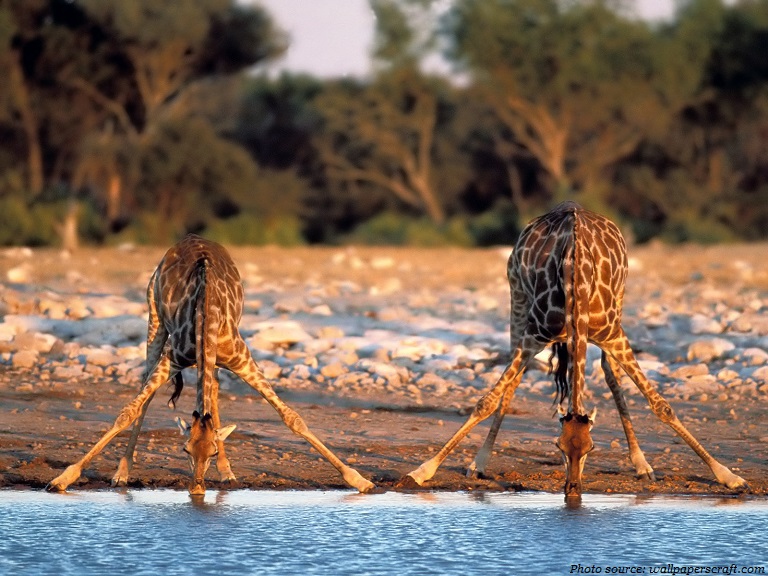 Drinking is one of the most dangerous times for a giraffe. While it is getting a drink it cannot keep a look out for predators and is vulnerable to attack.

Giraffes only need to drink once every few days. Most of their water comes from all the plants they eat.

Giraffes sleep less than two hours a day. In general, they sleep with their feet tucked under them and their head resting on their hindquarters, but they can also sleep for short periods of time standing up. 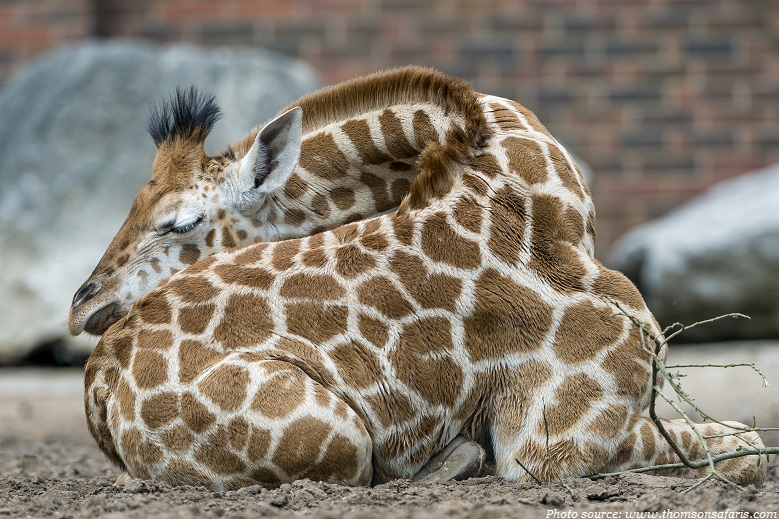 The tongue of the giraffe is black. It is 45 cm – 50 cm long (18 – 20 inches).The giraffes long tongue helps them separate the juicy green leaves from the harsh thorns.Also is frequently used for cleaning its nose. 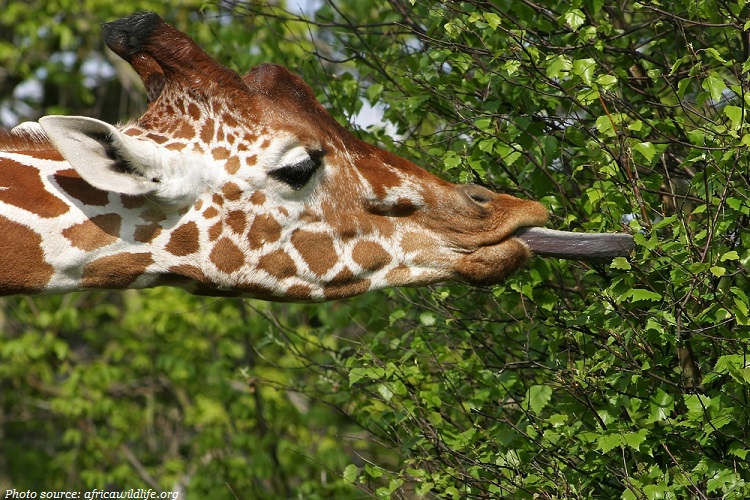 A giraffe’s spots are much like human fingerprints. No two individual giraffes have exactly the same pattern.

Giraffes and Oxpeckers (tick birds) have symbiotic relationship. Oxpeckers are eating parasites on giraffe’s body, its food for them and giraffes are getting rid of parasites. 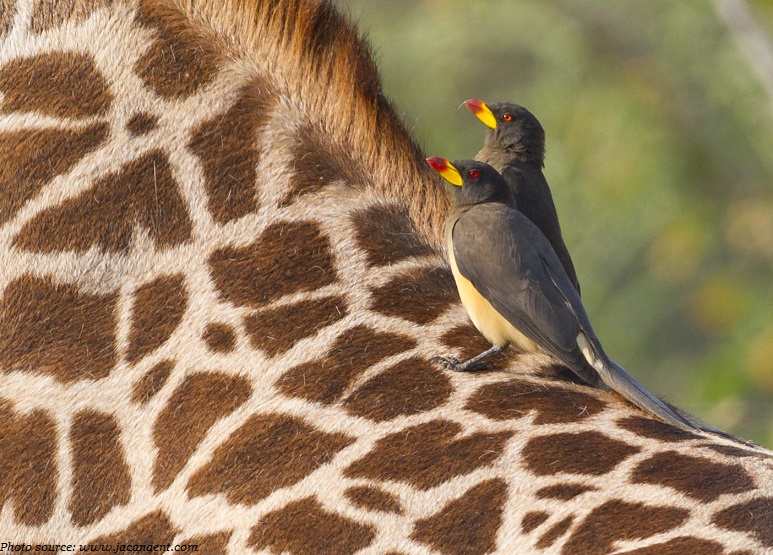 In ancient world giraffes were considered to be the mix between camel and a leopard and they called it “camelopardalis” (nowadays this is scientific name of one of the giraffe genus).

Giraffes as a whole are not endangered, and are listed as “least concern” by the IUCN’s Red List of Threatened Species. Although not threatened by extinction, the giraffe population is less than 80,000 and decreasing, but the exact numbers are unclear, according to the Red List. 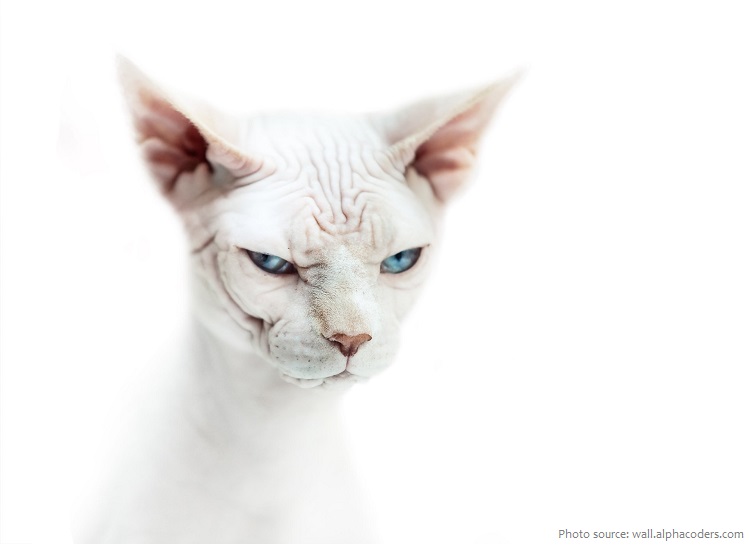 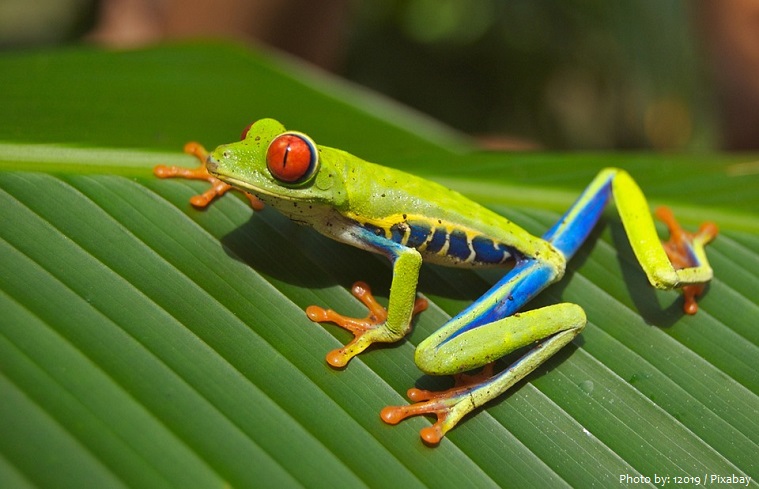