Interesting facts about Gardens by the Bay 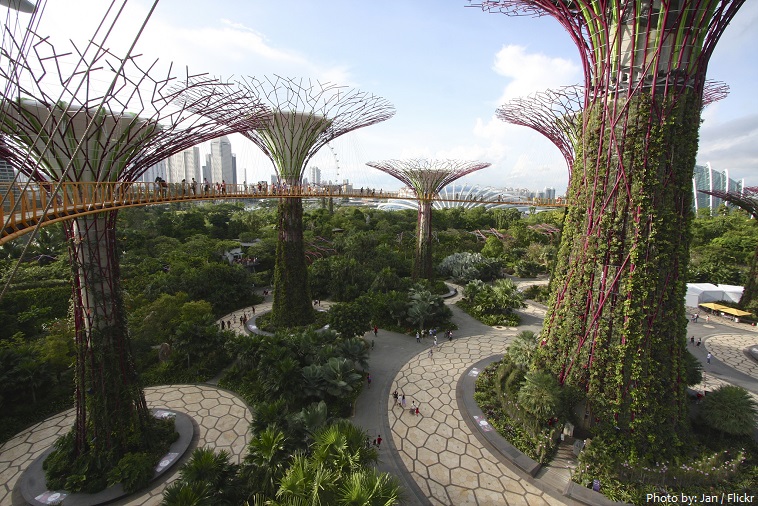 Gardens by the Bay is a nature park spanning 101 hectares (250 acres) of reclaimed land.

It is located in the Central Region of Singapore.

Gardens by the Bay is a spectacular tropical garden designed not only to celebrate the plants of the tropics, but also the cultural diversity of Singapore’s population.

In January 2006, Gardens by the Bay began an international master plan design competition to get world-class ideas for the Gardens. The competition attracted more than 70 entries sent by 170 firms, from over 24 countries, including 35 from Singapore. Grant Associates and Gustafson Porter, both from UK, were awarded the master plan design for the Bay South and East Gardens in September 2006. 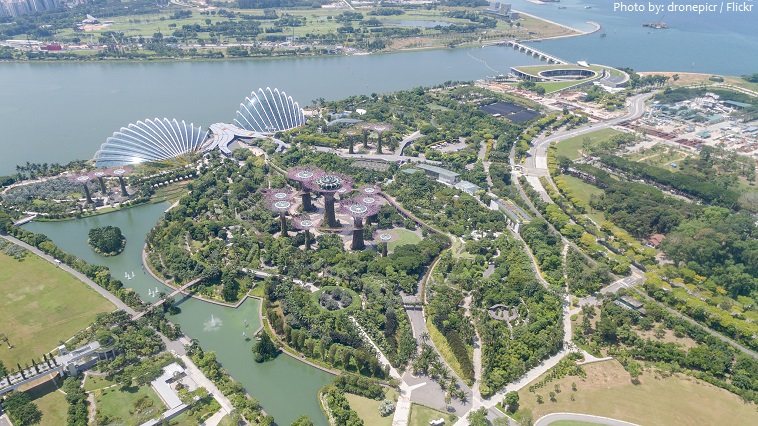 First opened in June 2012, Gardens by the Bay is organized around two main themes, Plants and Planet, including the Cloud Forest cooled conservatory and the World of Plants themed garden, and Plants and People, where the centrepieces are the Flower Dome and the Heritage Gardens.

Bay Central Garden will act as a link between Bay South and Bay East Gardens. It stands at 15 hectares (37 acres) with a 3-kilometre (1.9 mi) waterfront promenade that allows for scenic walks stretching from the city center to the east of Singapore. 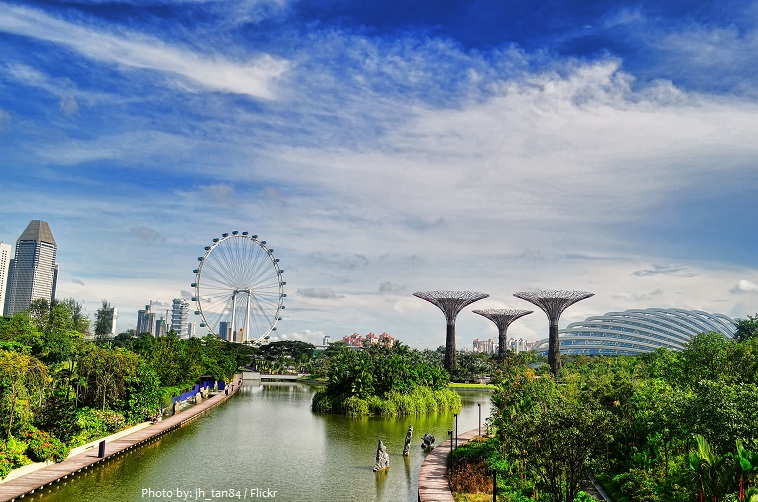 Bay East Garden is 32 hectares (79 acres) in size and it has a 2-kilometre (1.2 mi) promenade frontage bordering the Marina Reservoir. An interim park was developed at Bay East Garden in support of the 2010 Summer Youth Olympics. It is designed as a series of large tropical leaf-shaped gardens, each with its own specific landscaping design, character and theme. 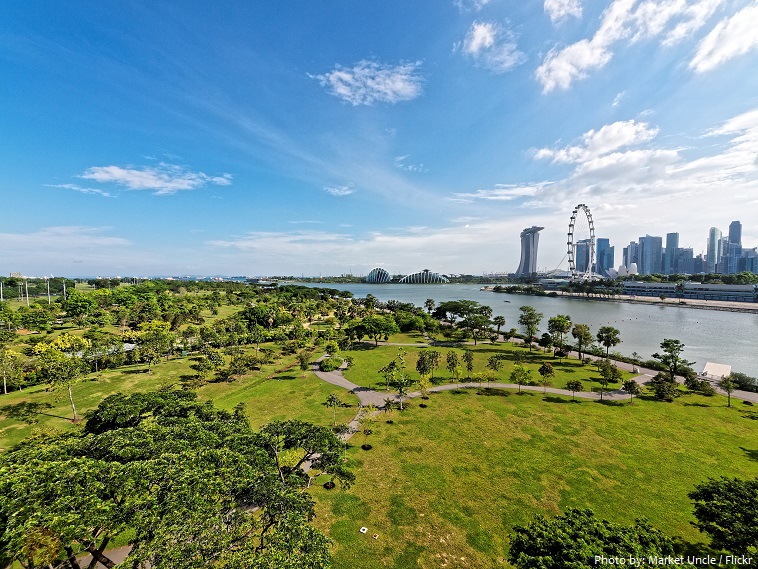 Bay South Garden is the largest of the three gardens at 54 hectares (130 acres) and aims to showcase the best of tropical horticulture and garden artistry. The overall concept of its master plan draws inspiration from an orchid as it is representative of the tropics and of Singapore, being the country’s national flower, the Vanda ‘Miss Joaquim’. There are a total of 18 Supertrees, all located within Bay South Garden. Out of the 18 Supertrees, twelve are situated in the Supertree Grove while the remaining six are placed in clusters of threes near the Arrival Square and Dragonfly Lake. 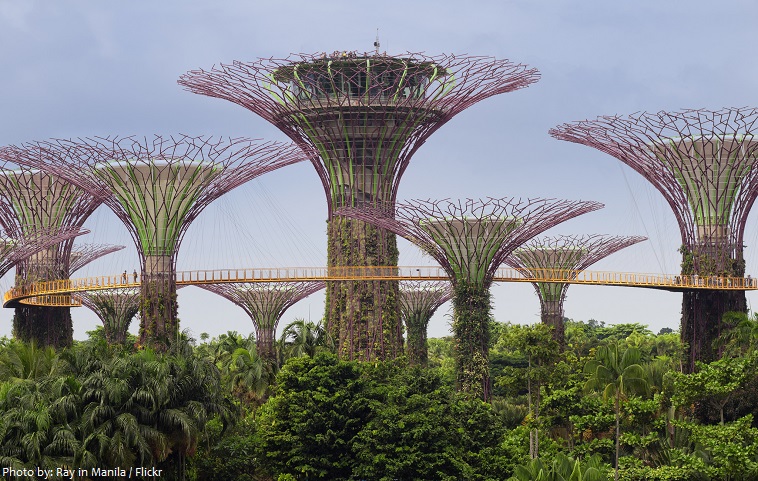 Supertrees are uniquely designed vertical gardens ranging from 25 to 50 meters in height (82 to 164 feet), with emphasis placed on the vertical display of tropical flowering climbers, epiphytes and ferns.

Supertrees perform a multitude of functions, which include planting, shading and working as environmental engines for the gardens. They are home to enclaves of unique and exotic ferns, vines, orchids and also a vast collection of bromeliads such as Tillandsia, amongst other plants.

Lit up in the evenings, the diligent trees continue multi-tasking with their very own light and sound show using colourful sequential lighting and music, illuminating the darkness and providing much visual enjoyment from an aerial perspective.

Given the relatively short time span to create a garden from reclaimed land, the Supertrees provide an immediate scale and dimension to the Gardens while marrying the form and function of mature trees.

The conservatory complex at Gardens by the Bay, Singapore, comprises two cooled conservatories – the Flower Dome and the Cloud Forest. 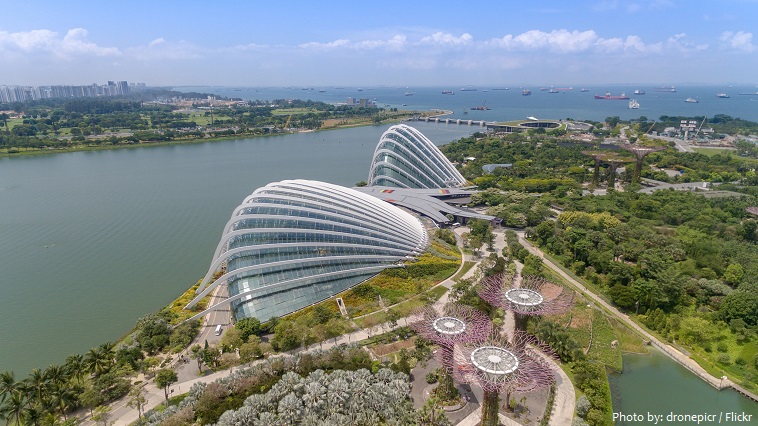 The Flower Dome is the lower but larger of the two, at 1.2 hectares (3 acres). It replicates a mild, dry climate and features plants found in the Mediterranean and other semi-arid tropical regions (e.g. parts of Australia, South America, South Africa). The Flower Dome is 38 meters (125 ft) high and maintains a temperature between 23 °C and 25 °C, slightly lower at night. 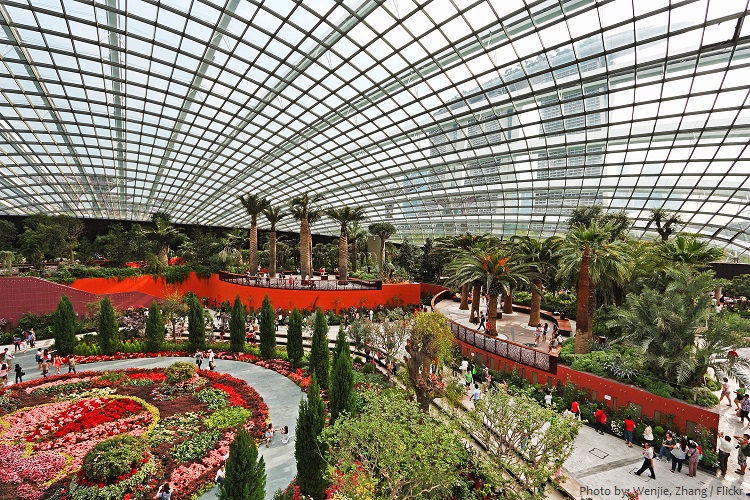 The Cloud Forest is higher but slightly smaller at 0.8 hectares (2.0 acres). It replicates the cool moist conditions found in tropical mountain regions between 1,000 metres (3,300 ft) and 3,000 meters (9,800 ft) above sea level, found in South-East Asia, Middle- and South America. It features a 42-meter (138 ft) “Cloud Mountain”, accessible by an elevator, and visitors will be able to descend the mountain via a circular path where a 35-meter (115 ft) waterfall provides visitors with refreshing cool air. 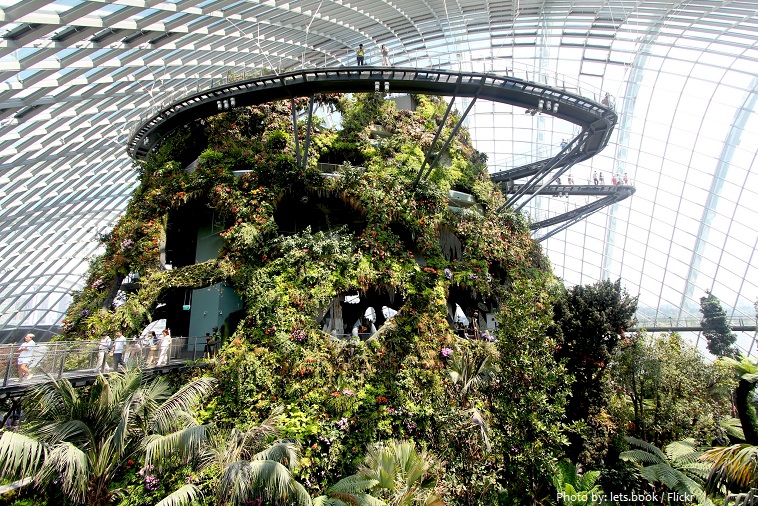 Singapore wants to be a leader in Asia in environmental sustainability and landscape architecture.

Gardens by the Bay is part of a strategy by the Singapore government to transform Singapore from a “Garden City” to a “City in a Garden”. The stated aim is to raise the quality of life by enhancing greenery and flora in the city.

Being one of the popular tourist attractions in Singapore, the park receives more than 8 millions people per year.

The planet of Xandar in the film adaptation of Guardians of the Galaxy, took inspiration from the location.

The documentary series Planet Earth II features the Supertree Grove in Episode 7, “A World of Wonder.”