Eritrea is a northeast African country on the Red Sea coast.

The official name of the country is the State of Eritrea.

It is bordered by Sudan in the west, Ethiopia in the south, and Djibouti in the southeast.

Eritrea is a multilingual country. The nation has no official language, as the Constitution establishes the “equality of all Eritrean languages”. The main languages spoken in Eritrea are Tigrinya, Tigre and Standard Arabic.

Asmara is the capital city and largest settlement in Eritrea. The city is located at the tip of an escarpment that is both the northwestern edge of the Eritrean highlands and the Great Rift Valley in neighbouring Ethiopia. The city is known for its well-preserved art deco and colonial Italian modernist architecture. In 2017, the city was declared as a UNESCO World Heritage Site. 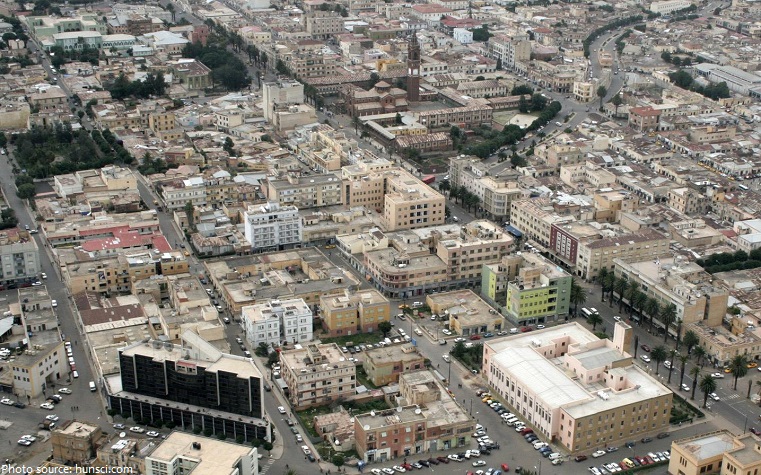 Eritrea’s terrain is dominated by extension of Ethiopian north-south trending highlands, descending on the east to a coastal desert plain, on the northwest to hilly terrain and on the southwest to
flat-to-rolling plains. 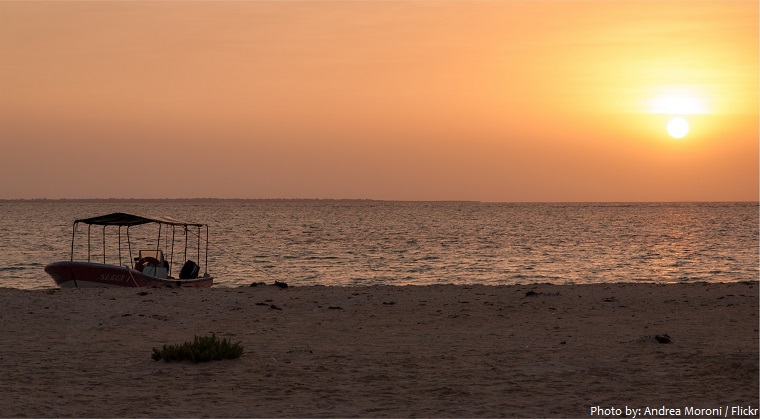 Scattered over a vast area of the Red Sea like a string of pearl upon the azure, translucent waters of the Red Sea, more than 350 Eritrean islands, among which more than 200 islands belong to the Dahlak Archipelago.

The national parks of Eritrea are some of the best places for indulging in the natural beauty of Africa. The Dahlak Marine National Park [photo below and the Semenawi Bahri National Park are the two declared national parks and this apart there three reserved forest areas in Eritrea. These are Yob, Gash-Setit and the Nafka. 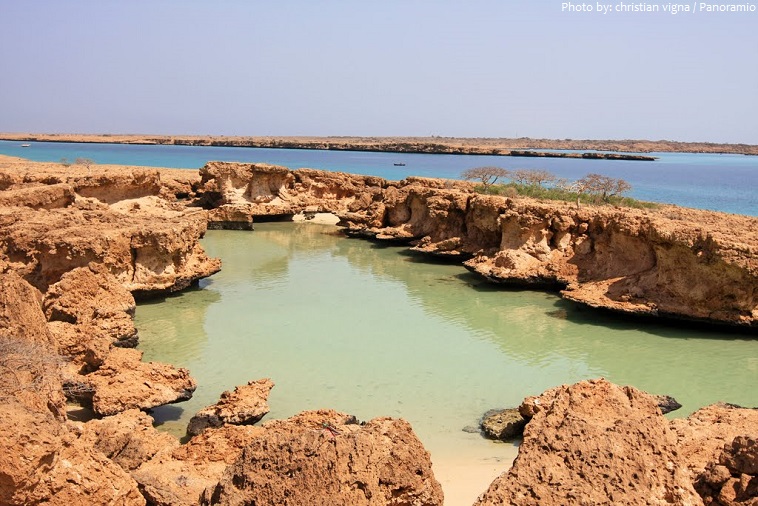 The Church of Our Lady of the Rosary, Asmara is a Roman Catholic church in Asmara. Often called “the cathedral”, it is a large Lombard Romanesque style church in the centre of the city, built in 1923 to serve as the principal church of the Apostolic Vicariate of Eritrea. The building in the Lombard Romanesque style was designed by the Milanese architect Oreste Scanavini and work on it was supervised by Mario Mazzetti. 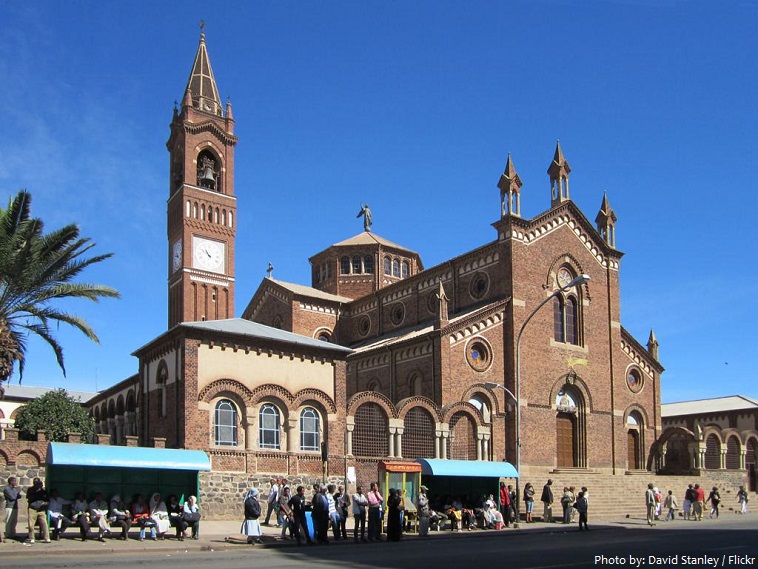 The Enda Mariam Orthodox Cathedral, Asmara, was built in 1938 and is a curious blend of Italian and Eritrean architecture. In its present rationalist/modernist style, the church dates from 1938, when an unknown Italian architect, added the upper portions of the two flanking towers and the modernistic treatment of the façade to the 1920 form designed by Ernesto Gallo. 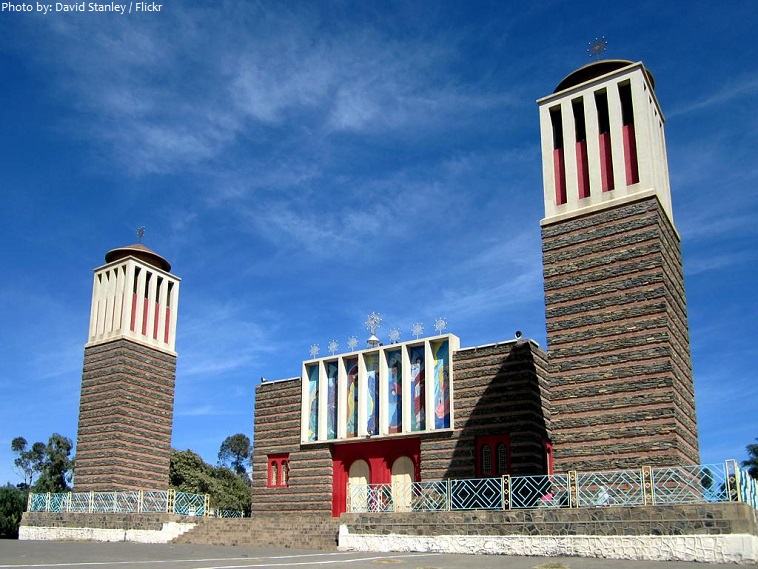 The ancient monastery of Debre Bizen lies like an eagles nest on the top of Mount Bizen, near the village Nefasit. It is the best-known monastery of the Eritrean Orthodox Tewahdo Church. The monastery was founded in the 1350s by Abba Filipos, who was a student of Abba Absadi. 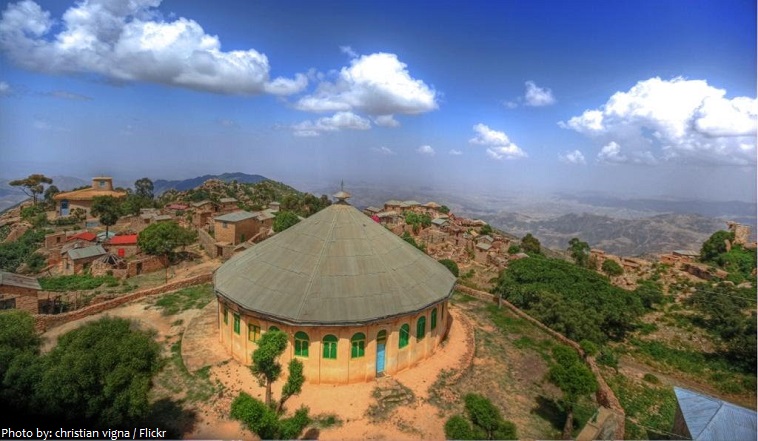 The Fiat Tagliero Building in Asmara is a Futurist-style service station completed in 1938 and designed by the Italian engineer Giuseppe Pettazzi. From the beginning conceived as a simple petrol station, Pettazzi designed a building that resembles an aeroplane. 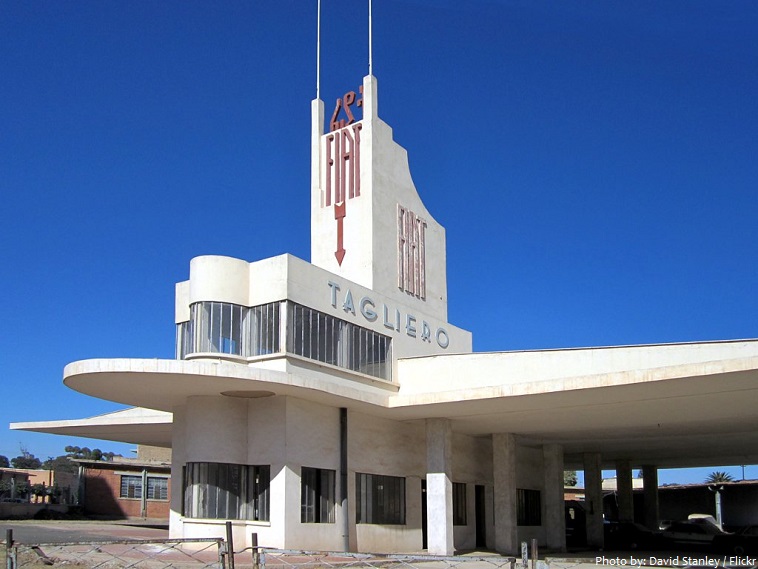 Eritrea was part of the first Ethiopian kingdom of Aksum until its decline in the 8th century.

It came under the control of the Ottoman Empire in the 16th century, and later of the Egyptians.

The Italians captured the coastal areas in 1885, and the Treaty of Uccialli (May 2, 1889) gave Italy sovereignty over part of Eritrea. The Italians named their colony after the Roman name for the Red Sea, Mare Erythraeum, and ruled there until World War II.

The British captured Eritrea in 1941 and later administered it as a UN Trust Territory until it became federated with Ethiopia on Sept. 15, 1952.

In 1993, after a war of independence that lasted nearly three decades, Eritrea became a sovereign country. 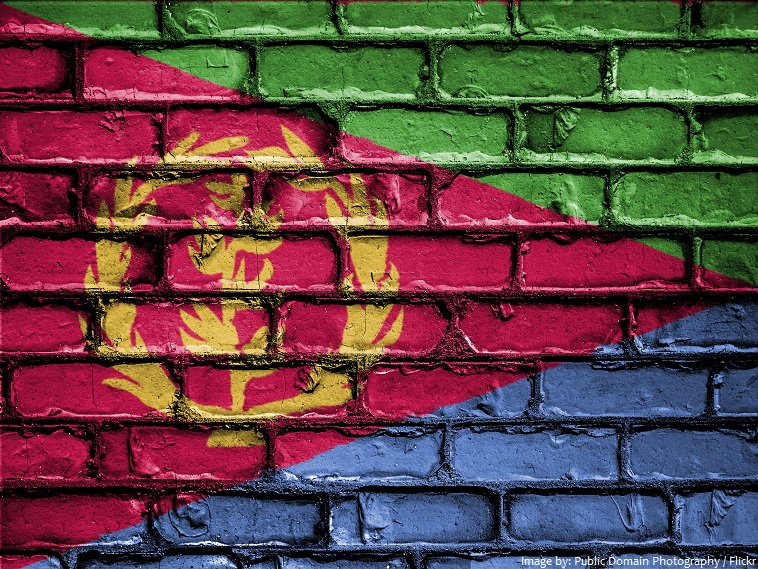 Prolonged periods of conflict and severe drought have adversely affected Eritrea’s agriculture-based economy and it remains one of the poorest countries in Africa.

“Eritrea” is an ancient name, associated in the past with its Greek form Erythraia, Ἐρυθραία, and its derived Latin form Erythræa. This name relates to that of the Red Sea, then called the Erythræan Sea, from the Greek for “red”, ἐρυθρός, erythros. When Italians created the colony of Eritrea in the 19th they named it with its current name.

At Buya in Eritrea, one of the oldest hominids representing a possible link between Homo erectus and an archaic Homo sapiens was found by Italian scientists. Dated to over 1 million years old, it is the oldest skeletal find of its kind and provides a link between hominids and the earliest anatomically modern humans.

Eritrea has several species of mammals and a rich avifauna of 560 species of birds.

Lions are said to inhabit the mountains of the Gash-Barka Region. There is also a small population of African bush elephants that roam in some parts of the country.

In the coastal areas marine species that are common include dolphin, dugong, whale shark, turtles, marlin, swordfish, and manta ray.

One of the most recognizable parts of Eritrean culture is the coffee ceremony. Coffee is offered when visiting friends, during festivities, or as a daily staple of life.

Football and cycling are the most popular sports in Eritrea.