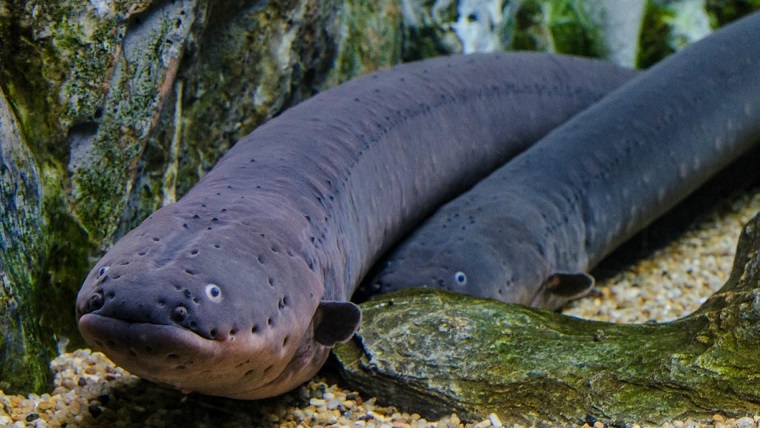 An eel is a snake-like fish with a slender elongated body and poorly developed fins, proverbial for its slipperiness.

There are over 800 different species of eel.

The term “eel” originally referred to the European eel, and the name of the genus means “European-eel-shaped.”

Eels can live for 70 years or more – depending on the specie though most species of eel don’t live for more than 30 years. 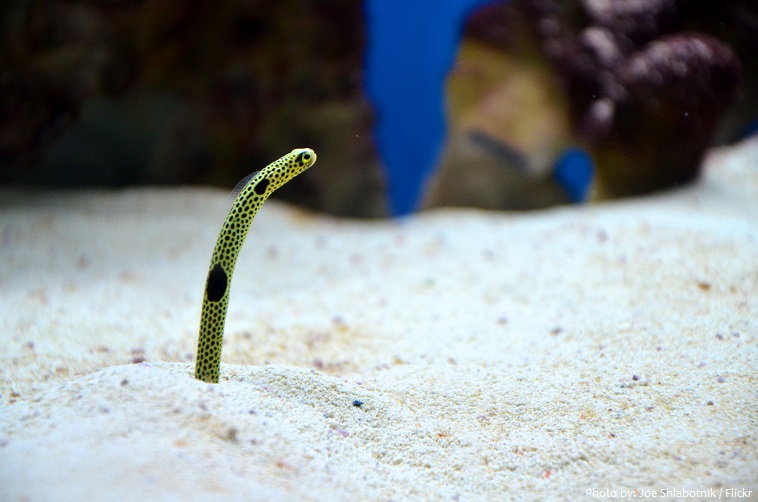 Eels are elongated fish, ranging in length from 5 centimeters (2 inches) in the one-jawed eel (Monognathus ahlstromi) to 4 meters (13 feet) in the slender giant moray.

Eels range in color from drab gray or black in deep-sea species to colourful and patterned in tropical reef species.

The body covering is usually scaleless. Minor departures from this overall body plan occur in the various eel families and are correlated well with different modes of life. 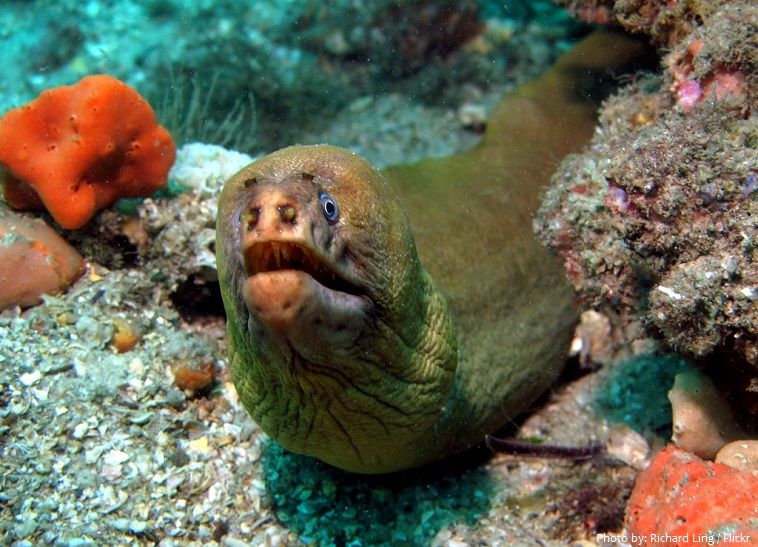 Most eels live in the shallow waters of the ocean and burrow into sand, mud, or amongst rocks. Some species of eels also live in deeper water on the continental shelves and over the slopes deep as 4,000 meters (13,000 feet). There are also freshwater eels living in rivers and lakes.

A majority of eel species are nocturnal, thus are rarely seen. Sometimes, they are seen living together in holes, or “eel pits”.

Eels swim by generating body waves which travel the length of their bodies. They can swim backwards by reversing the direction of the wave.

Most eels are ambush predators. This means they get their food by waiting for prey to come by and seizing it with an abrupt, snakelike motion.

Eels eat a variety of things. Depending on the eel species, they can eat worms, insects, other fish, frogs, crabs, and even carcasses. 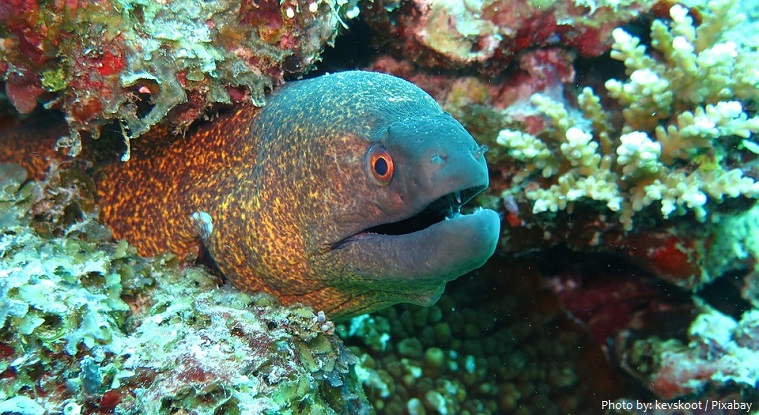 Eels begin life as flat and transparent larvae, called leptocephali. Larvae then change into glass eels – transparent juvenile eels; then become elvers before finally seeking out their juvenile and adult habitats. Many eels remain in the sea throughout their lives, but freshwater elvers of eels in the family anguillidae travel upstream and are forced to climb up obstructions, such as weirs, dam walls, and natural waterfalls.

Freshwater eels and marine eels are commonly used in Japanese cuisine; foods such as unadon and unajū are popular, but expensive. Eels are also very popular in Chinese cuisine, and are prepared in many different ways.

The European eel and other freshwater eels are eaten in Europe, the United States, and other places. 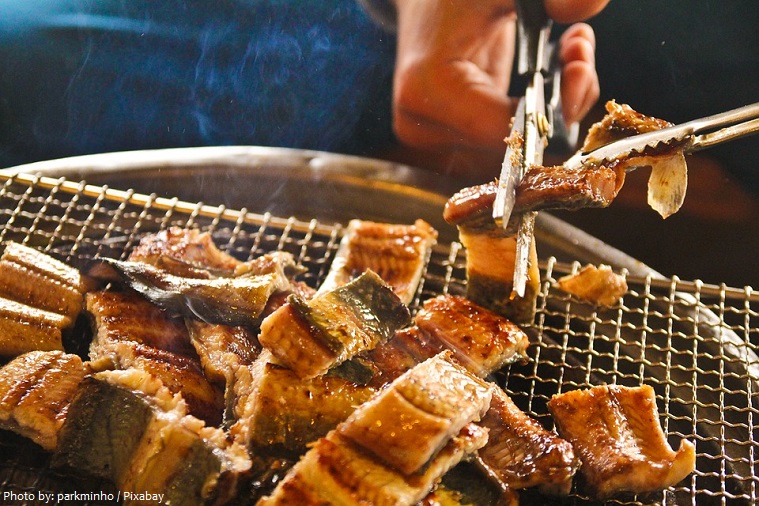 In northern Germany, the Netherlands, the Czech Republic, Poland, Denmark, and Sweden, smoked eel is considered a delicacy.

Eel blood is poisonous to humans and other mammals, but both cooking and the digestive process destroy the toxic protein. The toxin derived from eel blood serum was used by Charles Richet in his Nobel winning research which discovered anaphylaxis (by injecting it into dogs and observing the effect).

The electric eel gets its name from its shocking abilities! Special organs in the eel’s body release powerful electric charges of up to 650 volts—that’s more than five times the power of a standard United States wall socket!

The shock of an electric eel has been known to knock a horse off its feet.

There are many historical legends surrounding eels. For instance, some Philippine tribes consider eels to be the souls of the dead. In parts of Europe there is a legend that rubbing the skin with oil of eel will cause a person to see fairies. The Egyptians were said to worship eels. 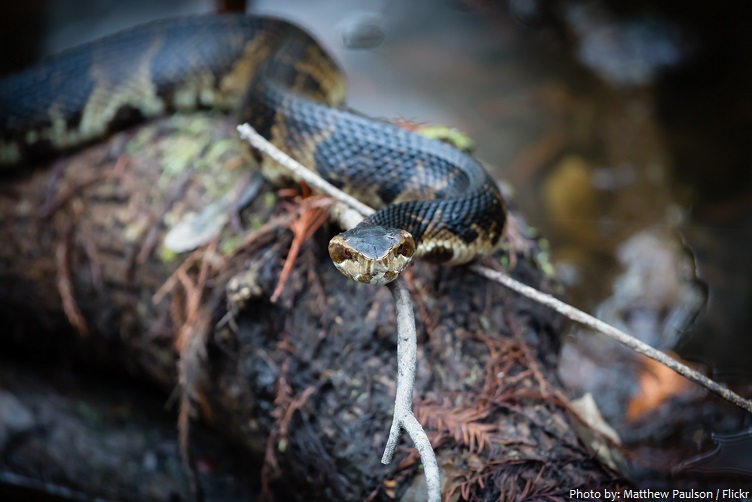