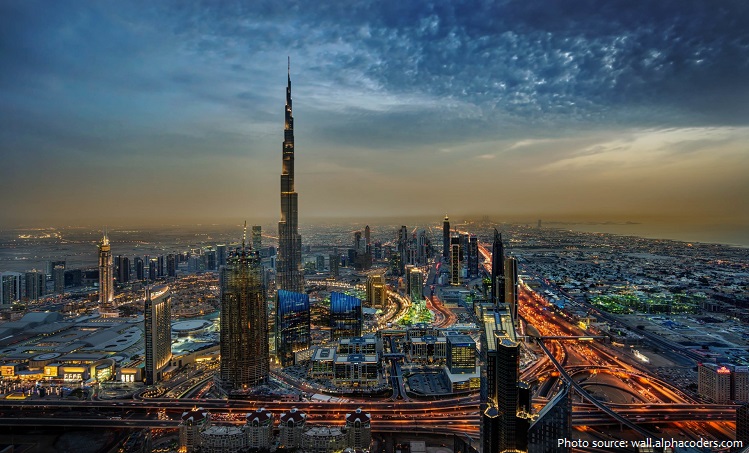 Dubai is the largest and most populous city in the United Arab Emirates.

It is located on the southeast coast of the Persian Gulf and is the capital of the Emirate of Dubai, one of the seven emirates that make up the country.

The average elevation in Dubai is 16 meters (52 feet) above sea level. 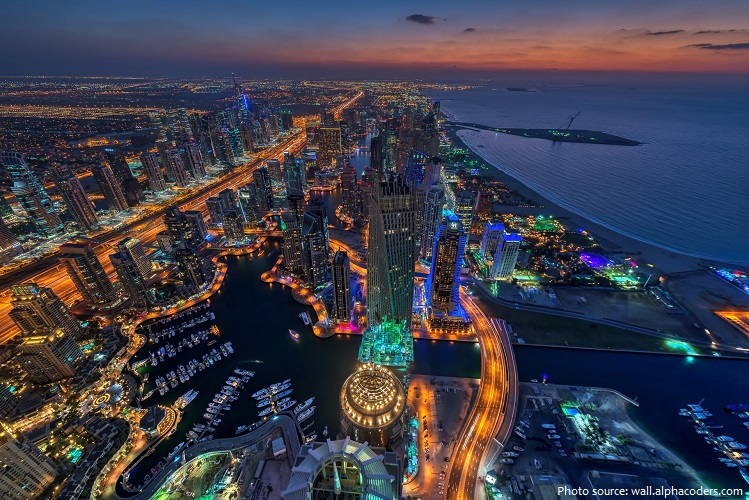 The first mention of the Dubai region dates back to 1095 in the Andalusian-Arab geographer Abu Abdullah al Bakri’s Book of Geography. By the late 1500s, Dubai was known by traders and merchants for its pearl industry.

In the early 19th century, Dubai was officially established but it was a dependent of Abu Dhabi until 1833.

By the turn of the 20th century Dubai was a successful port.

When oil was discovered in 1966, Sheikh Rashid utilized the oil revenues to spur infrastructure development in Dubai.

Dubai’s oil revenue helped accelerate the early development of the city, but its reserves are limited and production levels are low: today, less than 5% of the emirate’s revenue comes from oil. 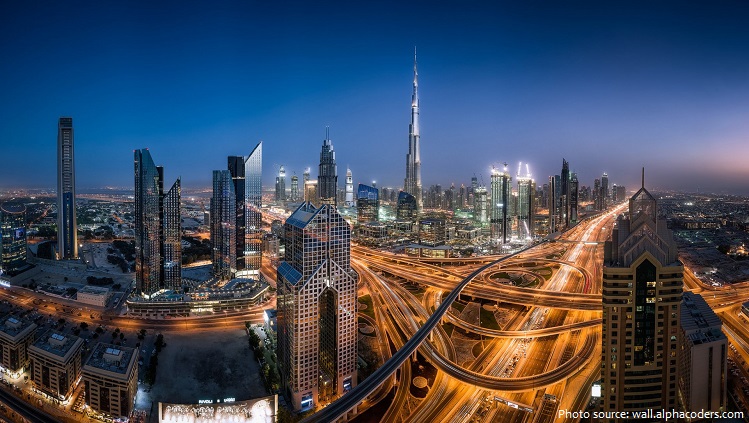 The city has become iconic for its skyscrapers and high-rise buildings.

Dubai’s has futuristic appeal and abundance of western entertainments such as a sleek metro that zips through the sky like something out of Blade Runner, sumptuous shopping malls, an indoor ski park, and countless bars.

Dubai’s most famous landmark building is the Burj Khalifa. With a total height of 829.8 m (2,722 ft) and a roof height (excluding antenna) of 828 m (2,717 ft) it is the tallest building in the world. Not just the tallest building, the Burj’s height surpassed anything ever built by man from the ground up. 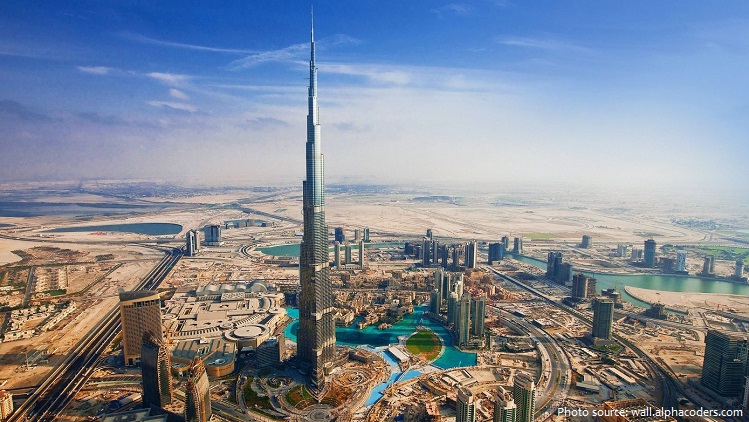 The Dubai Fountain is the world’s largest choreographed fountain system set on the 12- hectare (30-acre) manmade Burj Khalifa Lake. Illuminated by 6,600 lights and 25 colored projectors, it is 275 m (902 ft) long and shoots water up to 150 meters (500 feet) into the air accompanied by a range of classical to contemporary Arabic and world music. It was built at a cost of AED 800 million (USD $218 million). 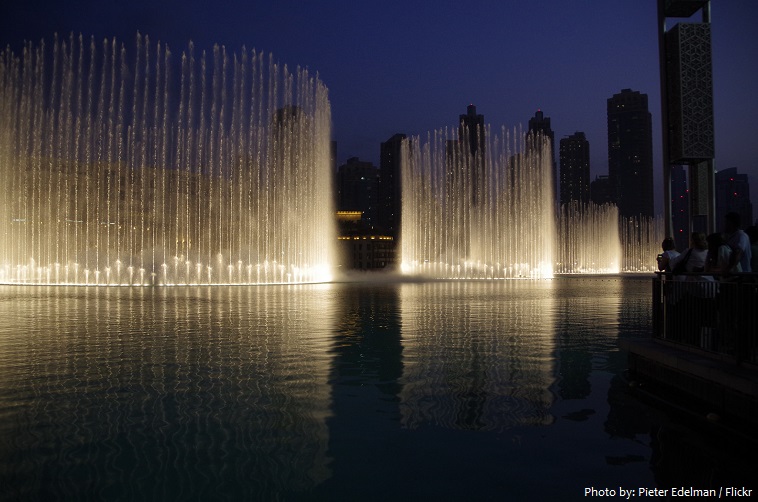 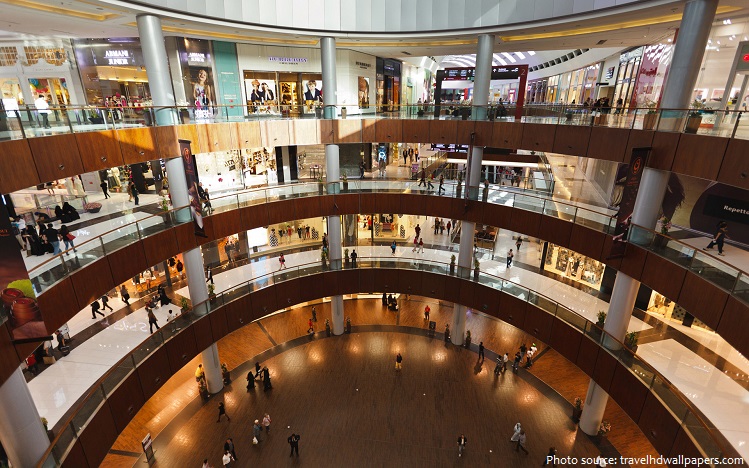 One of the city’s top tourist attractions, the Dubai Aquarium houses 140 species of sea life in the huge suspended tank on the ground floor of the Dubai Mall. As well as free viewing from the mall, if you enter the Underwater Zoo, you can walk through the aquarium tunnels.

The Burj al-Arab is a luxury hotel located in Dubai. At 321 meters (1,053 feet) it is the third tallest hotel in the world (not including buildings with mixed use); however, 39% of its total height is made up of non-occupiable space. The shape of the structure is designed to mimic the sail of a ship. It has been called “The World’s Only 7 Star Hotel”. 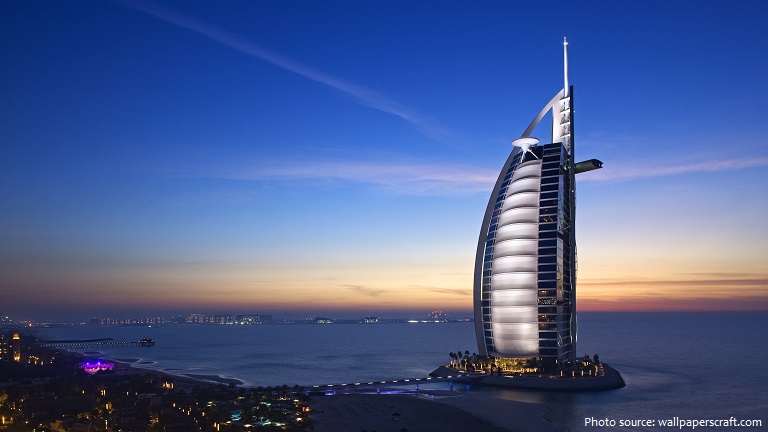 Palm Islands are three artificial islands, Palm Jumeirah, Deira Island and Palm Jebel Ali, on the coast of Dubai. As of November 2014, only Palm Jumeirah has been completed. This island takes the form of a palm tree, topped by a crescent. After completion, Palm Jebel Ali will take a similar shape; each island will be host to a large number of residential, leisure and entertainment centers and will add a total of 520 kilometers (323 miles) of non-public beaches to the city of Dubai. 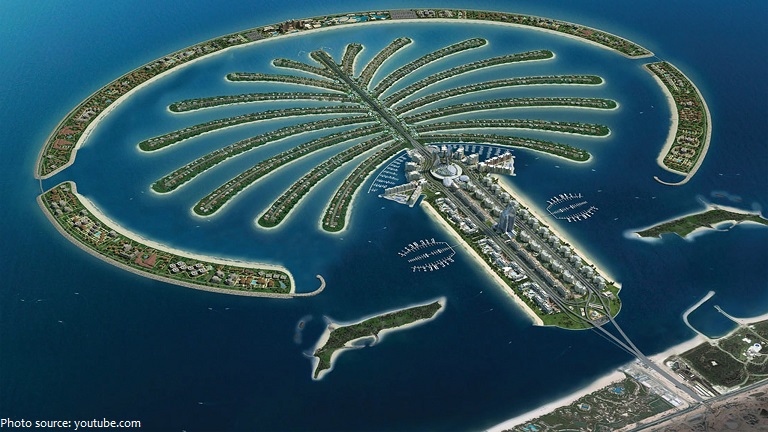 The Dubai Miracle Garden is a flower garden located in the district of Dubailand, Dubai. The garden was launched on Valentine’s Day in 2013. The garden occupies over 72,000 square metres (780,000 square feet), making it the world’s largest natural flower garden featuring over 109 million flowers planted. 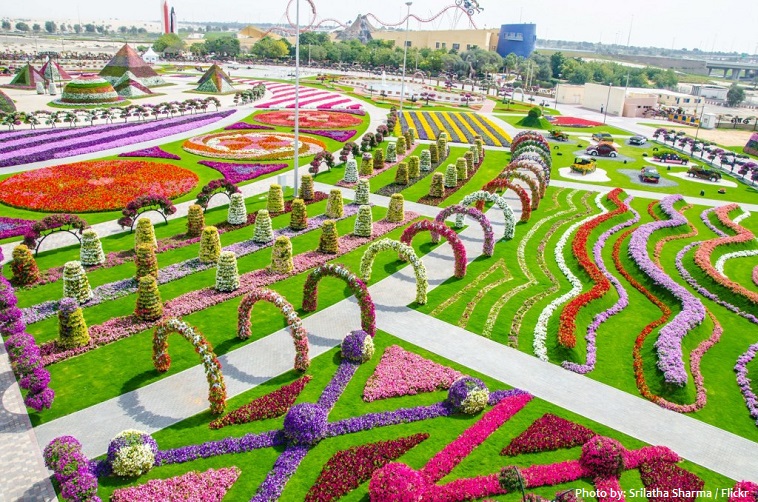 Ski Dubai is a large indoor skiing facility at Mall of the Emirates, offering snowboarding, ski lessons, a children’s play area and a café. It opened in November 2005 and houses the world’s second largest indoor snow park. 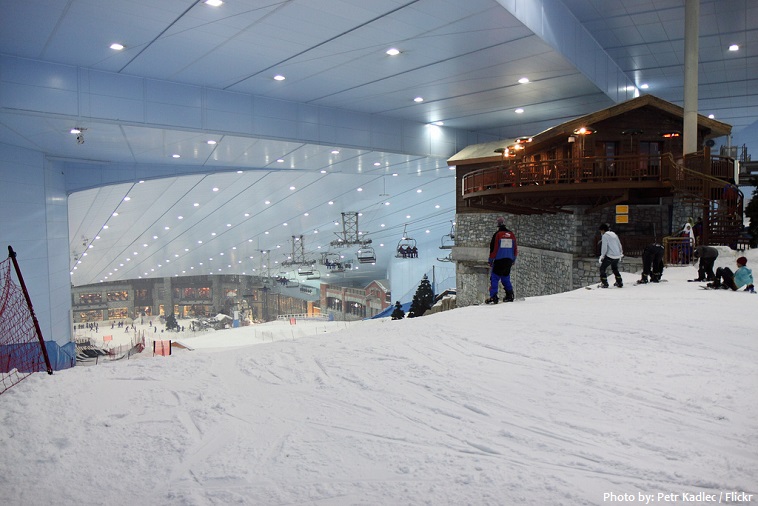 The $3.89 billion Dubai Metro is the world’s first driverless metro rail network and has the world’s longest fullyautomated metro network with a route length of 75 kilometers (47 miles). 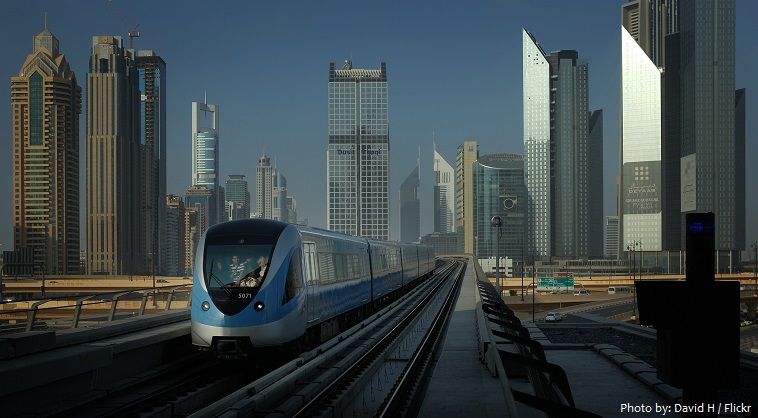 Dubai International Airport was the busiest airport in the world by passenger traffic handling 88.2 million passengers in 2017.

Dubai has been called the “shopping capital of the Middle East.”

Dubai is also referred to as “the City of Gold” as the Gold Souk in Deira houses nearly 250 gold retail shops.

Dubai is known for its nightlife. Clubs and bars are found mostly in hotels due to the liquor laws. The New York Times described Dubai as “the kind of city where you might run into Michael Jordan at the Buddha Bar or stumble across Naomi Campbell celebrating her birthday with a multiday bash”. 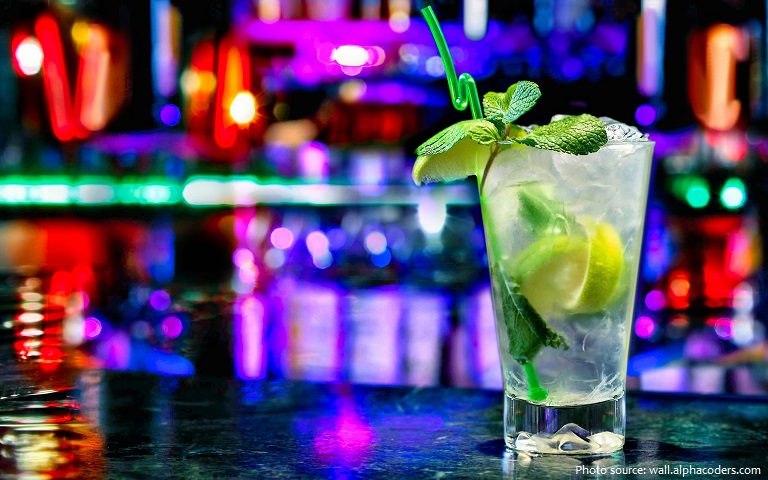 Tourism is an important part of the Dubai government’s strategy to maintain the flow of foreign cash into the emirate.

Dubai has a hot desert climate. Summers in Dubai are extremely hot, windy, and humid, with an average high around 41 °C (106 °F) and overnight lows around 30 °C (86 °F) in the hottest month, August.

Arabic food is very popular and is available everywhere in the city. Fast food, South Asian, and Chinese cuisines are also very popular and are widely available. The sale and consumption of pork, though legal, is regulated and is sold only to non-Muslims, in designated areas of supermarkets and airports.

In 2014, Dubai’s hotel rooms were rated as the second most expensive in the world, after Geneva, Switzerland.

Football and cricket are the most popular sports in Dubai.

Kissing in certain places is illegal and can result in deportation.

Dubai is one of the safest cities in the world. 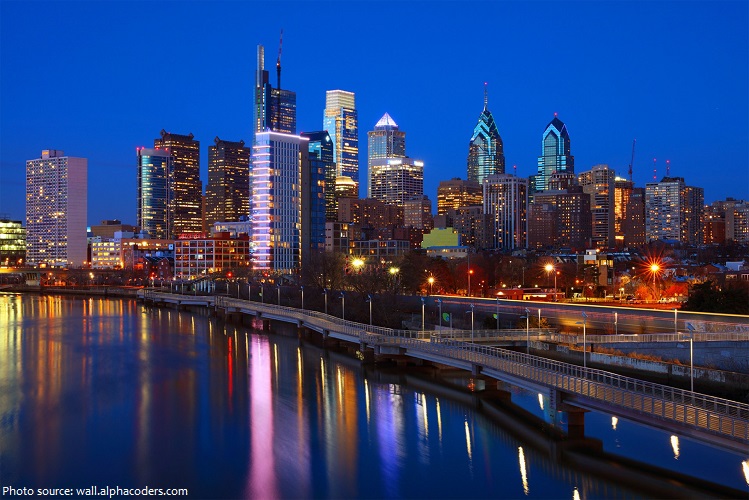 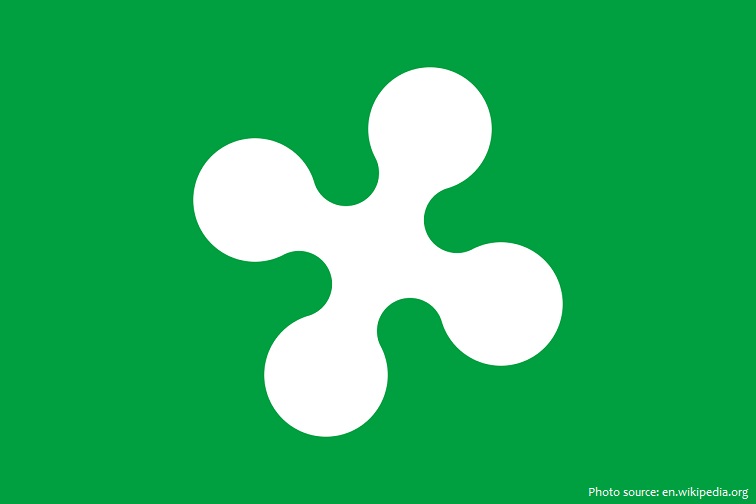