The crested gecko or eyelash gecko is a species of gecko.

The species is found in southern New Caledonia. There are three disjunct populations, one found on the Isle of Pines and surrounding islets, and there are two populations found on the main island of Grande Terre. One population is around the Blue River, which is a protected provincial park, and the other is further north, just south of Mount Dzumac. 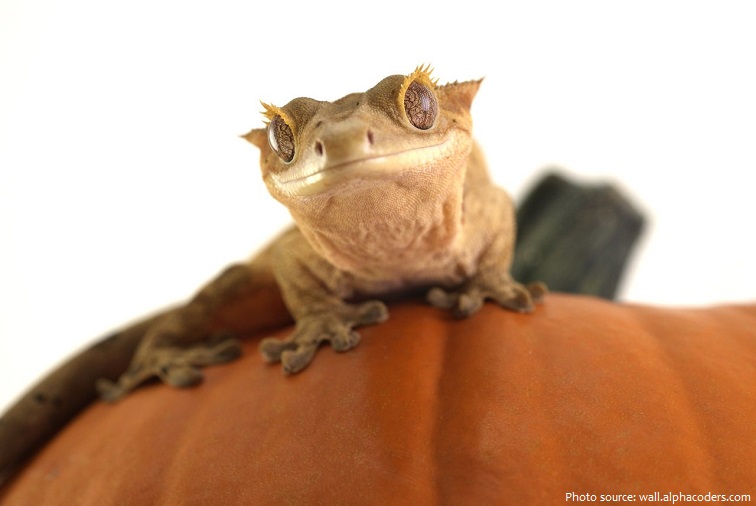 They inhabit the canopy of the New Caledonian rainforests and are most typically found at elevations from 150 to 1000 meters (490 to 3280 feet) above sea level.

The lifespan for the crested gecko is from 5 to 10 in the wild and from 10 to 15 years captivity.

Crested geckos are among the largest gecko species and typically range from 15 to 25 centimeters (6 to 10 inches) in length, including 10 to 15 centimeters (4 to 6 inches) of tail length.

The crested gecko has many naturally occurring color groups, including grey, brown, red, orange, and yellow of various shades. They have three color morphs in the wild, which include pattern-less, white-fringed, and tiger. 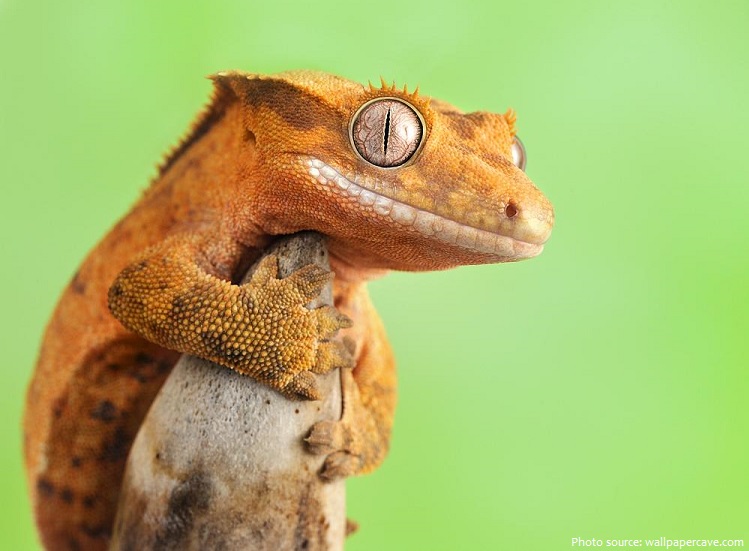 Among the most distinctive features of these geckos are the hair-like projections found above the eyes, which greatly resemble eyelashes. Crested geckos also have two rows of spines that run from the sides of their wedge-shaped head to the base of their tail.

Crested geckos do not have eyelids. Instead, a transparent scale, or spectacle, keeps each eye moist, and the geckos use their tongues to clear away debris.

The crested gecko will not regrow its tail once lost. However, the cells around the base of the tail are brittle, allowing the tail to break away when threatened or caught by a predator.

Crested geckos are primarily nocturnal. They spend much of their time foraging in shrubs and lower portions of the canopy, rarely traveling much higher than 3 meters (10 feet) from the forest floor. 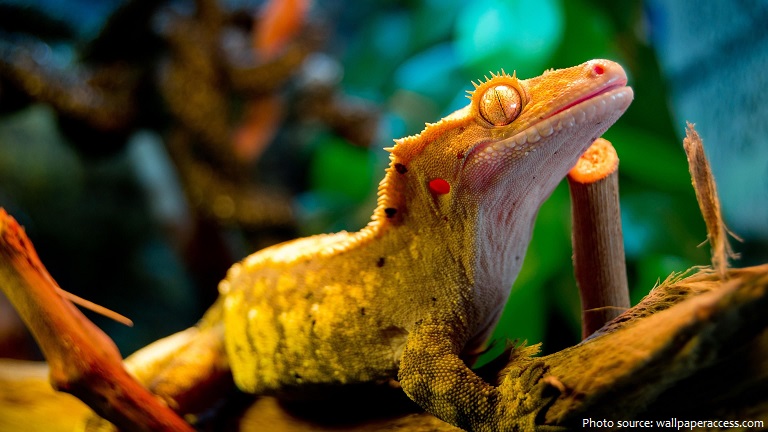 They spend daytime hours resting in thick vegetation near the forest floor, where it is cooler and less sunny.

Unlike most species of gecko, this species is an omnivore feeding on fruit, nectar, pollen, and a variety of insects. In captivity, they should be fed a commercially prepared, fruit-based diet with live feeder insects as a supplement.

Crested geckos use a high pitched chirping sound that is primarily used to call for a mate and as a defense mechanism to frighten a predator in an attempt to escape.

Little is known about the wild reproductive behavior of crested geckos, but in captivity they breed readily, with the female laying two eggs, which hatch 60–150 days after they are laid. 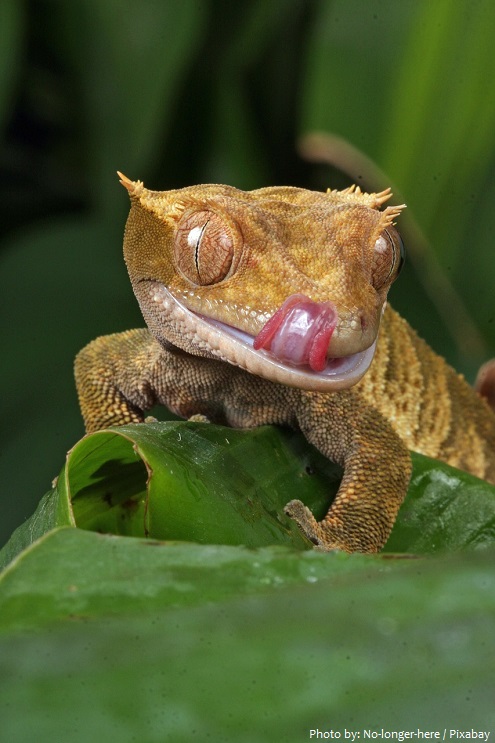 Newly hatched crested geckos will generally not eat until after they have shed and eaten their skin for the first time, relying on the remains of their yolk sack for nutrition.

This species was thought extinct until it was rediscovered in 1994 during an expedition led by Robert Seipp. 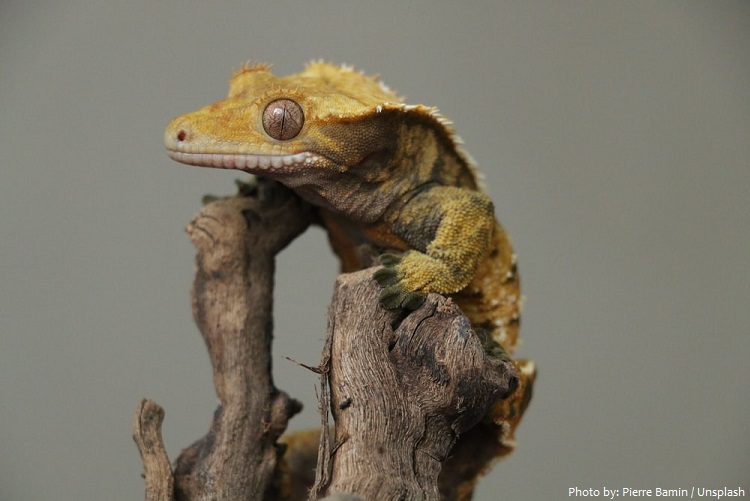 Along with several Rhacodactylus species, it is being considered for protected status by the Convention on the International Trade in Endangered Species of Wild Flora and Fauna.

The biggest single threat to the wild population appears to be the introduction of the little fire ant to New Caledonia. The ants prey on the geckos, stinging and attacking in great numbers, and they also compete with the geckos for food by preying on arthropods.

The crested gecko is popular in the pet trade. 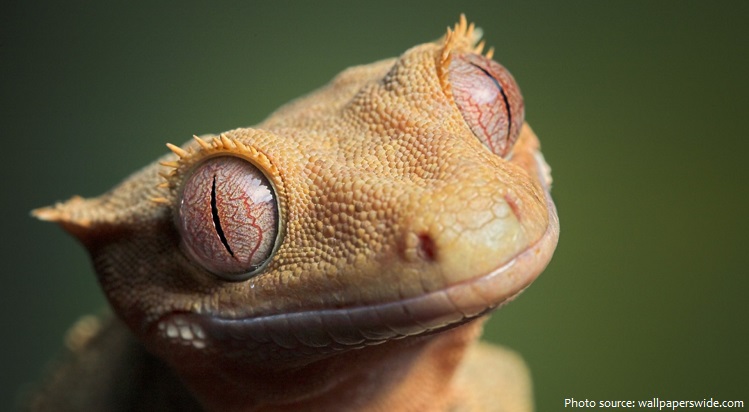 Though the export of wild crested geckos is now prohibited, biologists exported several specimens for breeding and study before New Caledonia stopped issuing permits to export the species. From these specimens, different breeding lines were established both in Europe and the United States. The crested gecko is now one of the most widely kept and bred species of gecko in the world.

Its scientific name is Correlophus ciliatus.

The specific name, ciliatus, is Latin, from cilia  meaning “fringe” or “eyelashes” and refers to the crest of skin over the animal’s eyes that resembles eyelashes. 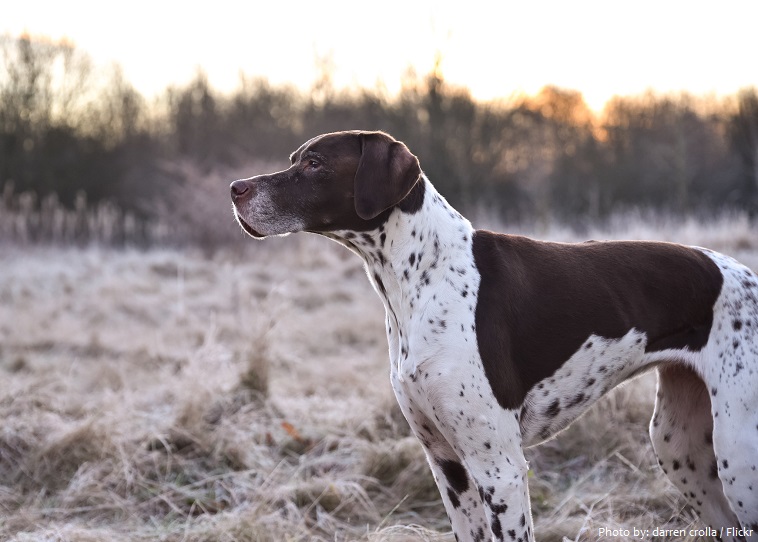