Catania is a city in eastern Sicily, Italy.

It is situated in the broad plain of Catania on the Ionian Sea Coast, south of Mount Etna.

As of October 2020, the population of Catania is about 315,000 people. It is the second largest city in Sicily, after Palermo, and the 10th largest cities in Italy. 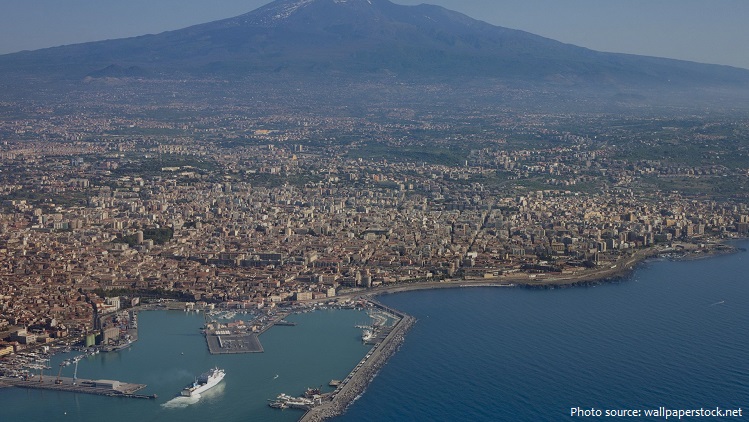 The city was founded in 729 BC by Chalcidians (settlers from Chalcis in the Greek island of Euboea) from Naxos, 80 km (50 miles) north.

It acquired importance in the 5th century BC with Hieron I, tyrant of Syracuse, and his son Deinomenes, who conquered it and renamed it Aetna after the volcano. The inhabitants restored the old name after driving out Deinomenes’ followers.

One of the first Sicilian towns to fall to the Romans (263 BC), Catania was made a colony by Octavian (later the emperor Augustus). 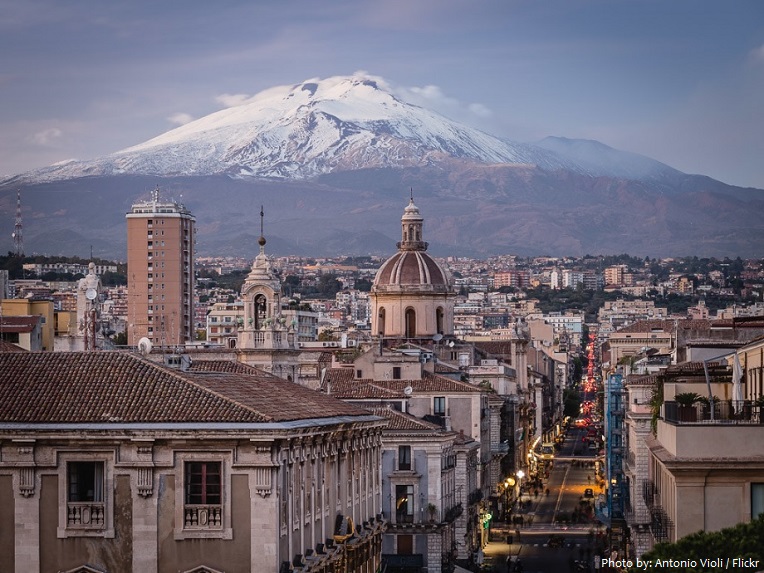 The Christians there suffered under the persecutions of the emperors Decius and Diocletian, and the Catanian martyrs included St. Agatha, patron saint of the city.

After the barbarian invasions, Catania fell successively to the Byzantines, the Arabs, and the Normans.

Saint Leo of Catania (703 – 789) was the fifteenth bishop of Catania, famed also for his love and care toward the poor. His feast day occurs on February 20, the day of his death in which he is venerated as a saint both by Roman Catholics and by the Orthodox Church. He lived in the lapse of time between the reigns of the Emperors Justinian II and Constantine IV. He struggled especially against the paganism and sorcery still prevalent in the Byzantine Sicily. 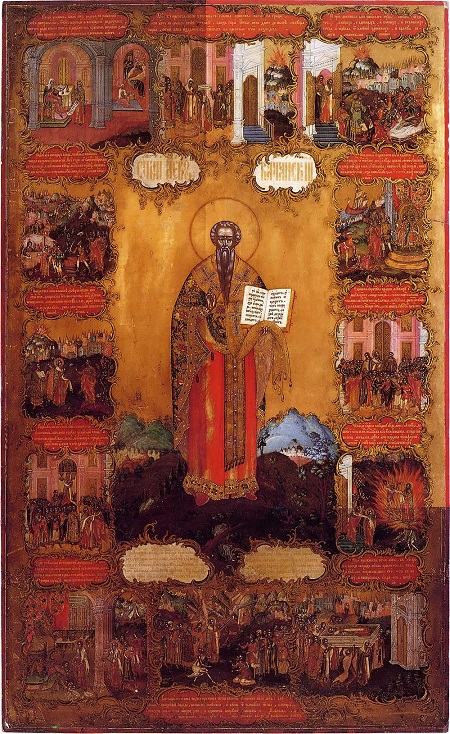 The city was almost completely destroyed by a catastrophic earthquake in 1169.

However, by the 14th century, and into the Renaissance period, Catania was one of Italy’s most important cultural, artistic and political centres.

It was the site of Sicily’s first university, founded in 1434.

The city has been the native or adopted home of some of Italy’s most famous artists and writers, including the composers Vincenzo Bellini and Giovanni Pacini, and the writers Giovanni Verga, Luigi Capuana, Federico De Roberto and Nino Martoglio. 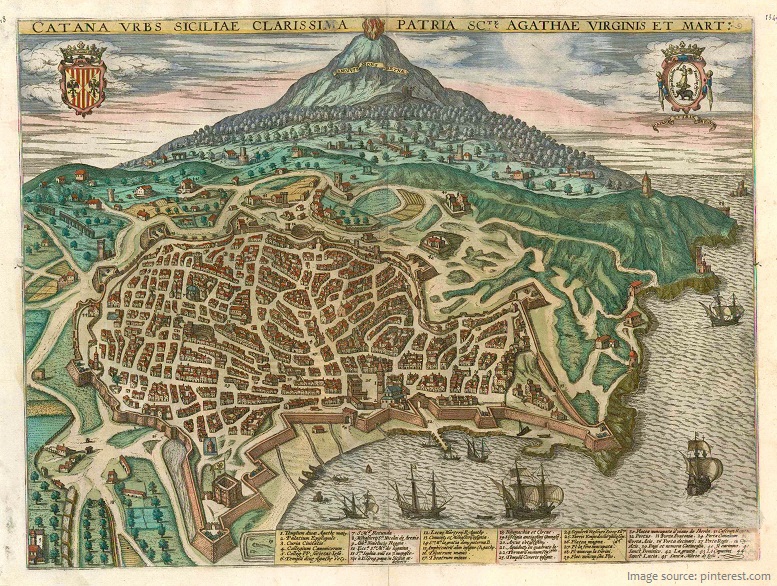 The city has been devastated several times by volcanic eruptions from nearby Mount Etna, the most violent of which was in 1669 and it suffered through another severely damaging earthquake in 1693.

Catania was one of the vanguards of the movement for the Sicilian autonomy in the early 19th century. In 1860 Giuseppe Garibaldi’s expedition of the Thousand conquered Sicily for Piedmont from the Kingdom of the Two Sicilies. Since the following year Catania was part of the newly unified Italy, whose history it shares since then.

The city is noted for its history, culture, architecture, and gastronomy. The section of the city known as the “old town” features some of the most striking examples of baroque architecture in Italy, and is a UNESCO World Heritage Site. 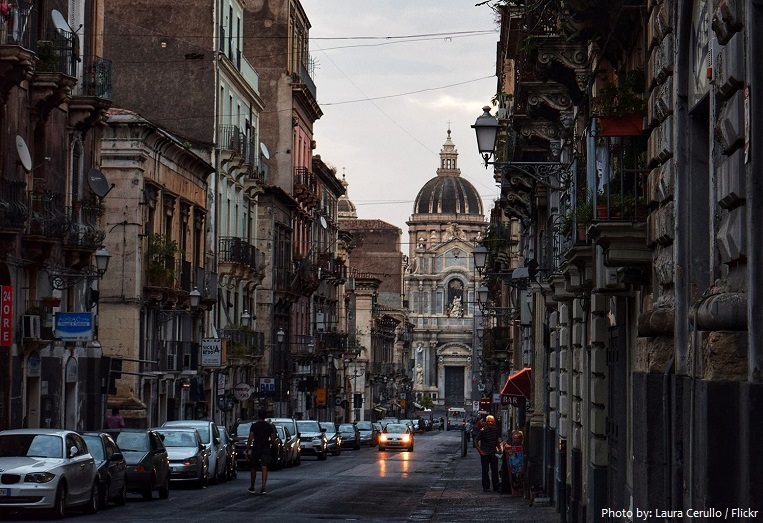 Catania Cathedral, dedicated to Saint Agatha, is a Roman Catholic cathedral in Catania. It was the seat of the Bishops of Catania until 1859, when the diocese was elevated to an archdiocese, and since then has been the seat of the Archbishops of Catania. The cathedral has been destroyed and rebuilt several times because of earthquakes and eruptions of the nearby Mount Etna. 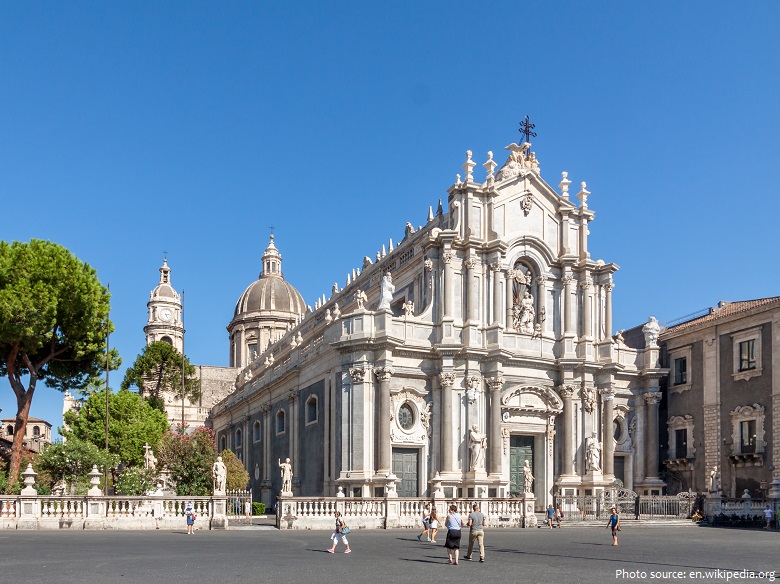 The Benedictine Monastery of San Nicolò l’Arena in Catania, is one of the largest monasteries in Europe and a UNESCO World Heritage Site (as a part of Val di Noto World Heritage Site). It is the second biggest Benedictine monastery in Europe (the biggest one is in Mafra). The monastery was founded in 1558 and today it hosts the Department of Humanities of the University of Catania.

The Basilica della Collegiata also known as Santa Maria dell’Elemosina is a church in Catania. Finished in 1768, it is an example of Sicilian Baroque. The church was built in the early 18th century, after the earthquake of 1693 that had destroyed most of the city. 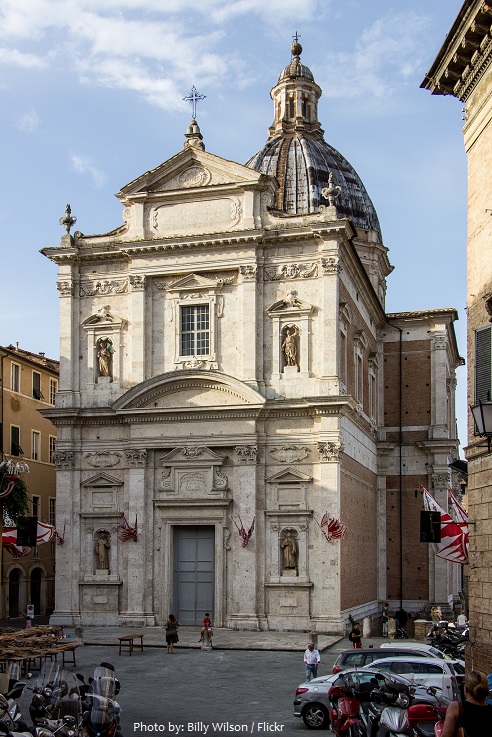 Castello Ursino also known as Castello Svevo di Catania, is a castle. It was built in the 13th century as a royal castle of the Kingdom of Sicily, and is mostly known for its role in the Sicilian Vespers, when it became the seat of the Sicilian Parliament. The castle is in good condition today, and it is open to the public as a museum. 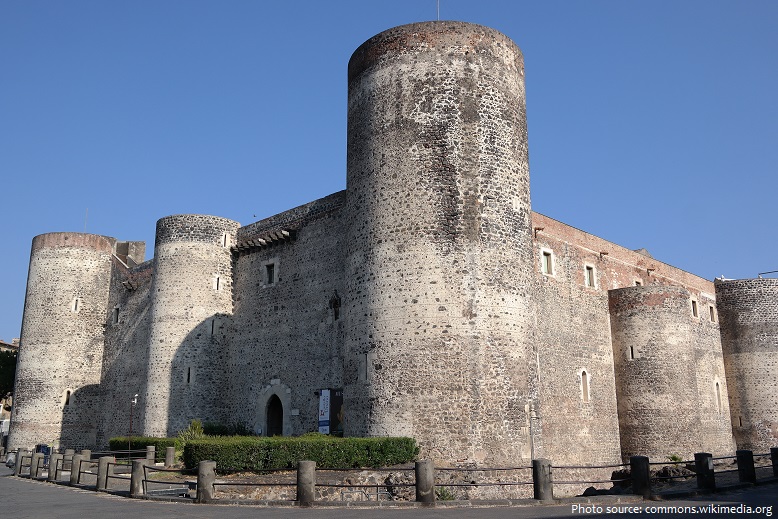 The Amphitheatre of Catania is a Roman amphitheatre, built in the Roman Imperial period, probably in the 2nd century AD, on the northern edge of the ancient city at the base of the Montevergine hill. Only a small section of the structure is now visible, below ground level, to the north of Piazza Stesicoro. 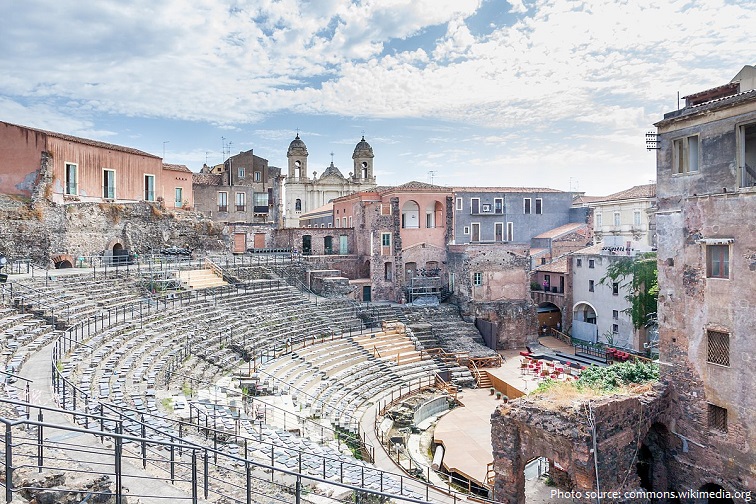 The Teatro Massimo Bellini is an opera house. Named after the local-born composer Vincenzo Bellini, it was inaugurated on 31 May 1890 with a performance of the composer’s masterwork, Norma. It seats 1,200. 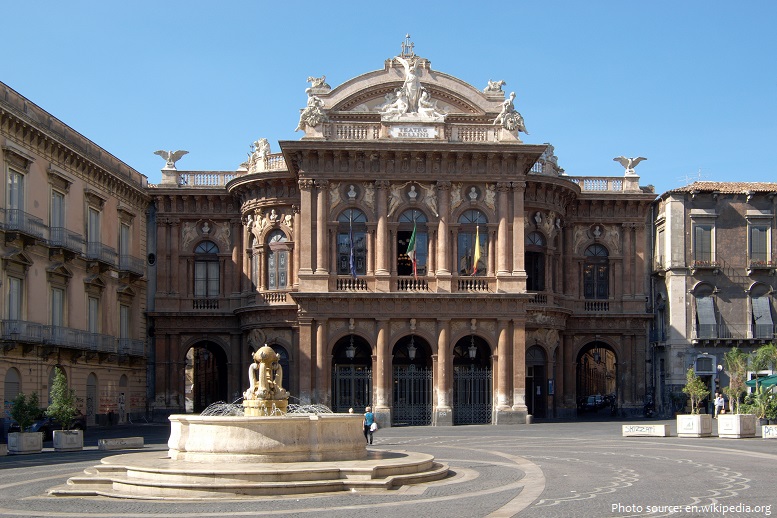 The Elephant Fountain is a well known cultural attraction in Catania and it is considered the symbol of the city. Giovanni Battista Vaccarini, inspired by the Bernini’s Minerva Elephant placed in Rome, created this amazing fountain in 1736. At the base of the fountain there are two sculptures that represent the main rivers of Catania, the Simeto and Amenano, and above these you have the elephant with an Egyptian obelisk on its back. 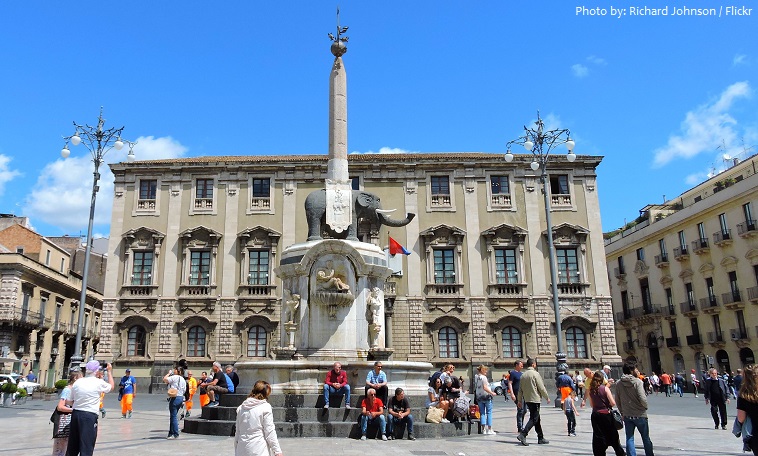 The Giardino Bellini is the oldest urban park of Catania. It occupies about 71,000 square meters (765,000 square feet). Before the construction of a public garden, the area was occupied by a botanical maze owned by the Ignazio Paternò Castello, prince of Biscari. In 1854, the Comune di Catania bought the area of the maze, and in 1864 started to adapt the area into a public garden. 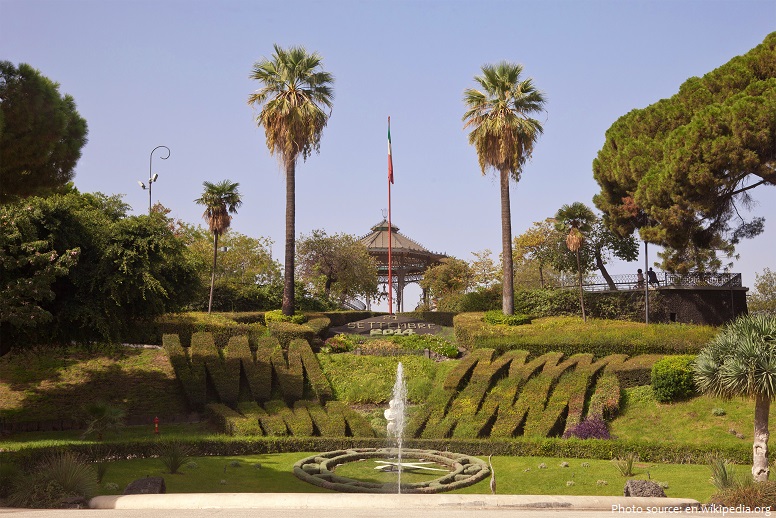 The ancient indigenous population of the Sicels named their villages after geographical attributes of their location. The Sicilian word, katane, means “grater, flaying knife, skinning place” or a “crude tool apt to pare”. Other translations of the name are “harsh lands”, “uneven ground”, “sharp stones”, or “rugged or rough soil”.

Food is an important part of Catania’s culture and way of life. Local cuisine emphasizes several traits of Sicilian one, whilst developing some of its own.

Street food is one of the best ways to experience traditional dishes. Arancini are perhaps the city’s most famous one: they are stuffed rice balls coated in bread-crumbs and deep fried – in Catania, they are shaped like a cone to remind of Mount Etna.

The city is home to the Catania Jazz Festival, which typically runs for several winter months with concerts in different locations.