Cashews are actually the kidney-shaped seeds that adhere to the bottom of the cashew apple, the fruit of the cashew tree, which is native to the coastal areas of northeastern Brazil.

The cashew tree made its way to Goa, India, between 1560 and 1565 via Portuguese sailors. From there it spread throughout Southeast Asia and eventually Africa.

Commercial growers in the 21st century cultivate cashews in warm, humid climates across the globe, with India, Ivory Coast, Vietnam and Brazil among the top producers of 32 cashew countries.

Cashew nuts are produced in tropical countries because the tree is frost sensitive, adapting to various climatic regions between the latitudes of 25°N and 25°S.

The cashew tree is large and evergreen, growing to 14 m (46 ft) tall, with a short, often irregularly shaped trunk. 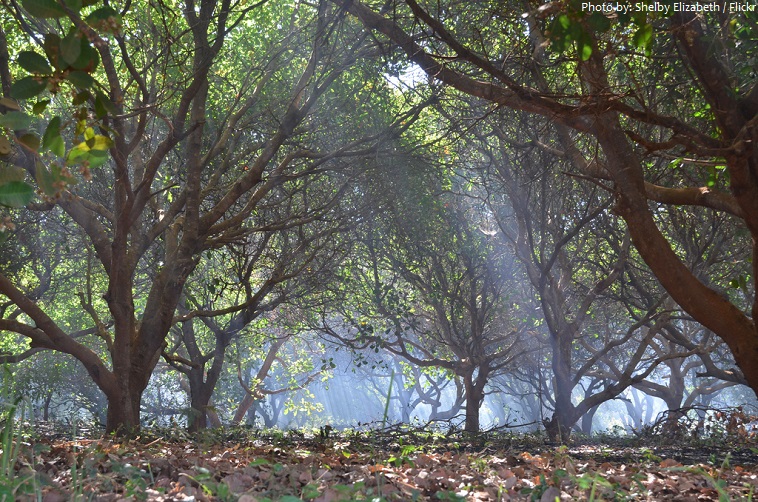 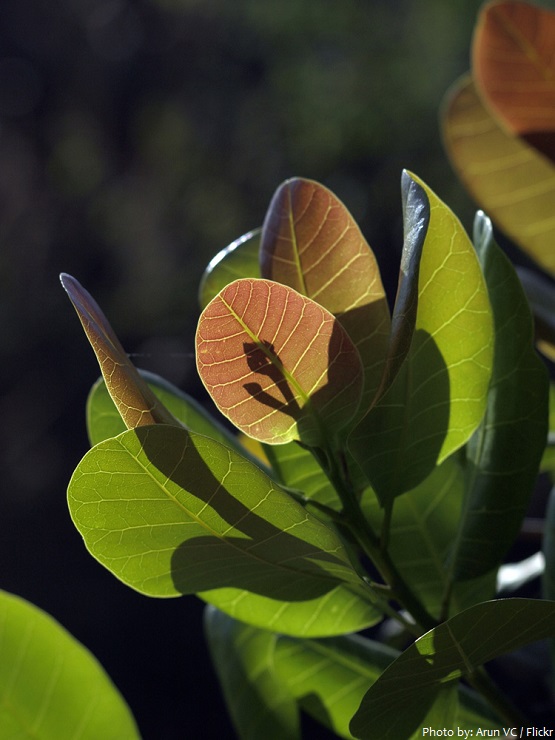 The flowers are produced in a panicle or corymb up to 26 cm (10 in) long; each flower is small, pale green at first, then turning reddish, with five slender, acute petals from 7 to 15 mm (0.28 to 0.59 in) long. The main pollinators are bats and insects. 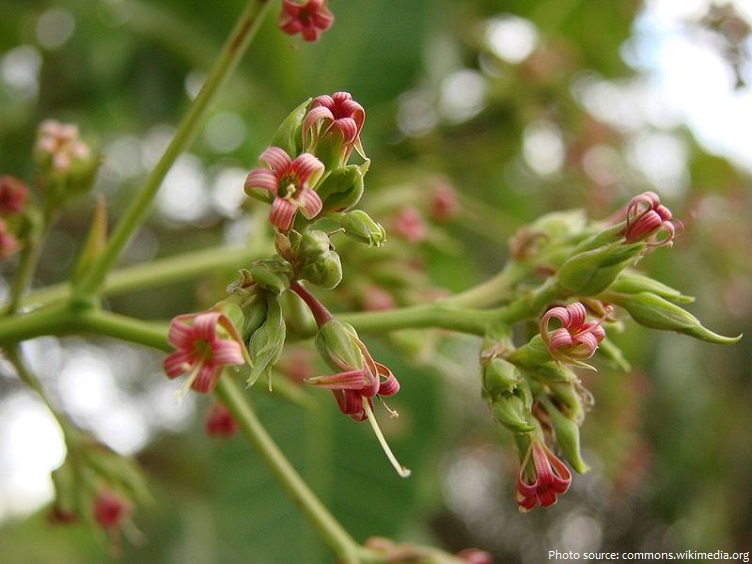 The fruit of the cashew tree is an accessory fruit or false fruit (like strawberry). The term false fruit (accessory fruit) is sometimes applied to a plant structure that resembles a fruit, but is not derived from a flower or flowers. Called the cashew apple, it ripens into a yellow and/or red structure from 5 to 11 cm (2.0–4.3 in) long. It is edible and has a strong “sweet” smell and a sweet taste. 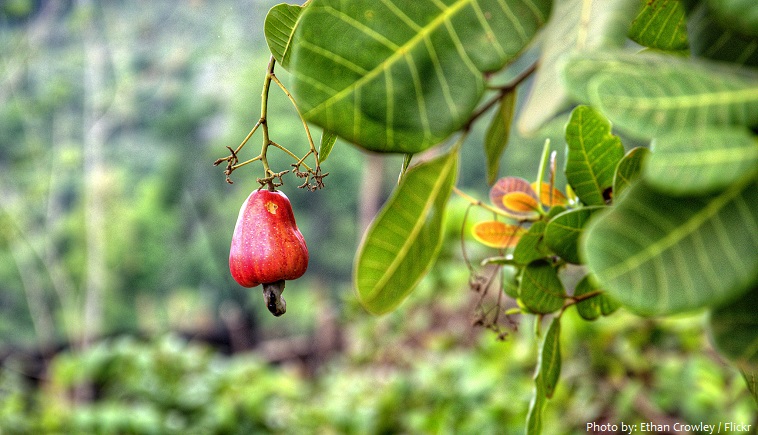 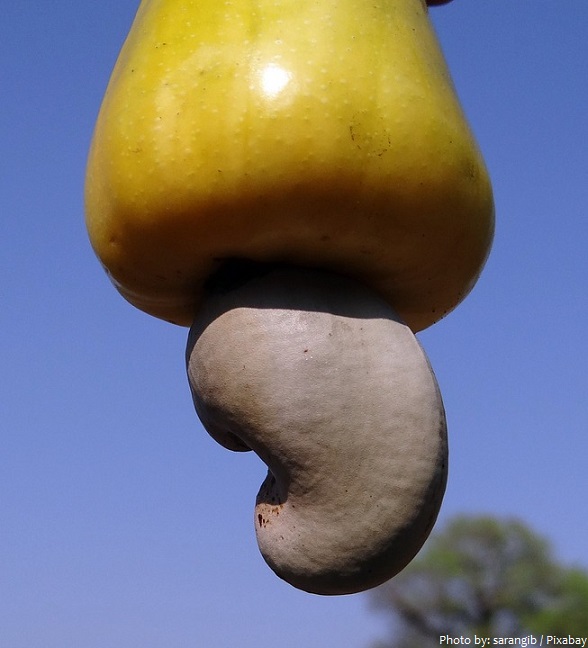 The seed is surrounded by a double shell containing a caustic phenolic resin, urushiol, a potent skin irritant toxin also found in the related poison ivy in the sumac family. Some people are allergic to cashews, but cashews are a less frequent allergen than some other nuts. 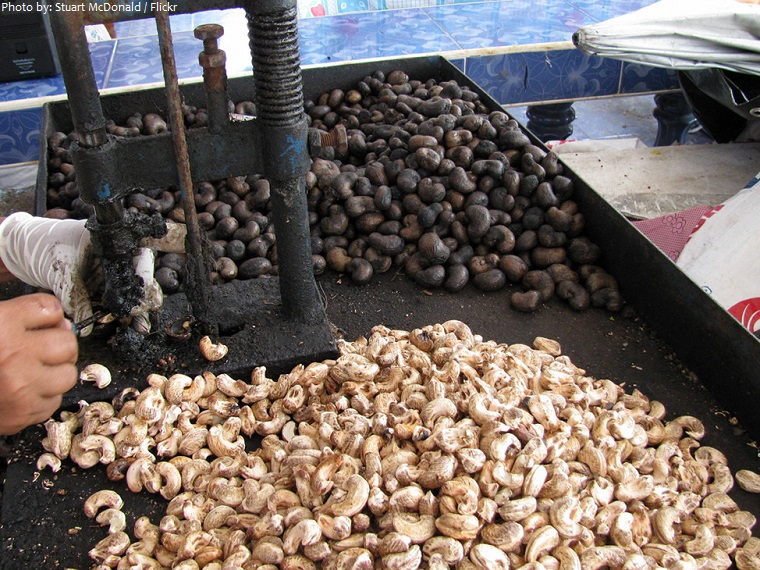 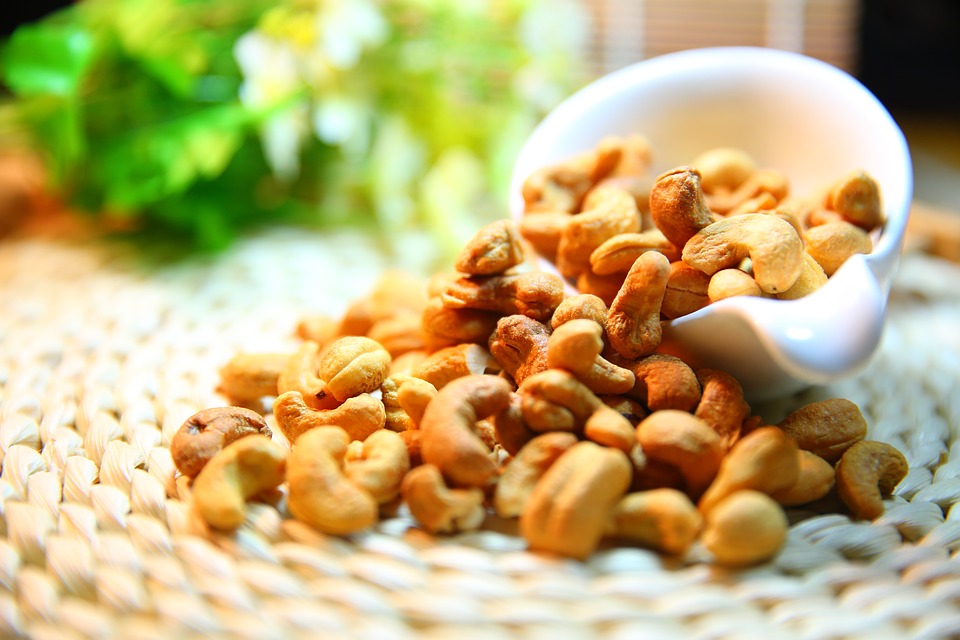 Some of the health benefits of cashews include a healthy heart, strong nerve and muscle function, aid in the formation of red blood cells, and an improved bone and oral health. They also good for your eyes and help regulate blood sugar control, increase HDL cholesterol, and increase fat oxidation. With its high antioxidant content, cashew nuts also help in boosting the immune system and preventing the formation of cancer cells.

In Western countries cashews are eaten mainly as a premium-quality snack food. They have a rich, buttery taste.

The so-called “raw cashews” available in health food shops have been cooked but not roasted or browned.

Cashews are commonly used in South and Southeast Asian cuisine and are a characteristic ingredient of numerous chicken and vegetarian dishes of southern India. 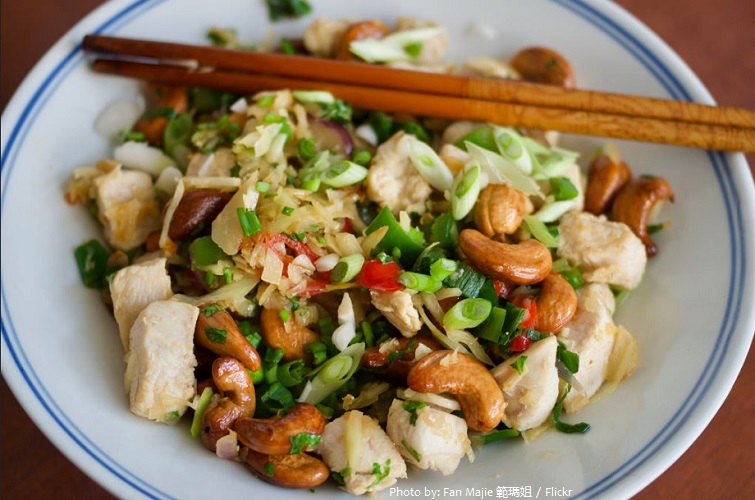 Cashews also can be processed into cashew cheese or cashew butter which is similar to peanut butter.

The shell of the cashew seed yields derivatives that can be used in many applications including lubricants, waterproofing, paints, and arms production, starting in World War II.

The cashew apple can be eaten fresh, cooked in curries, or fermented into vinegar, as well as an alcoholic drink. It is also used to make preserves, chutneys, and jams in some countries such as India and Brazil.

In traditional Maya medicine, the leaves or bark of cashew trees can be made into a tea to treat diarrhea.

Cashew belongs to the family Anacardiaceae, which also includes mango and pistachio.

Its English name derives from the Portuguese name for the fruit of the cashew tree caju, which itself is derived from the Tupian word acajú, literally meaning “nut that produces itself.”