Belfast is the capital and largest city of Northern Ireland.

It is situated at on the banks of the River Lagan on the east coast. 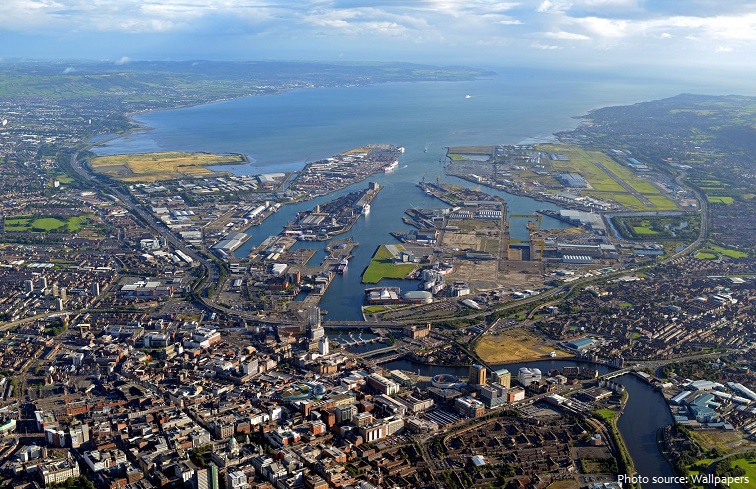 The name “Belfast” is derived from the Irish Béal Feirsde, which was later spelt Béal Feirste. The word béal means “mouth” or “rivermouth” while feirsde/feirste is the genitive singular of fearsaid and refers to a sandbar or tidal ford across a river’s mouth. The name therefore translates literally as “(river) mouth of the sandbar” or “(river) mouth of the ford”.

The history of Belfast as a settlement goes back to the Iron Age. The Giant’s Ring, a 5,000-year-old henge, is located near the city, and evidence of Bronze and Iron Age occupation have been found in the surrounding hills.

Belfast remained a small settlement of little importance during the Middle Ages. 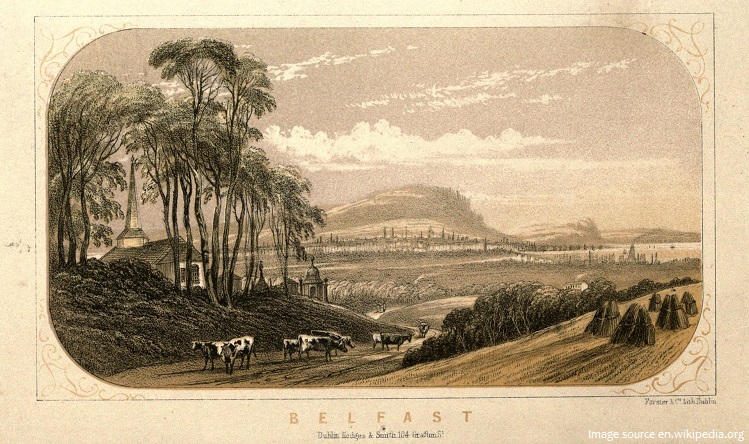 Belfast Castle was built in 1177 during the Norman Invasion of Ireland after John de Courcy acquired land in eastern Ulster that included the small village of Belfast.

Belfast became a substantial settlement in the 17th century after being established as an English town by Sir Arthur Chichester.

Belfast survived the Irish insurrection of 1641, and by 1685 it had a population of about 2,000, largely engaged in brick, rope, net, and sailcloth making. 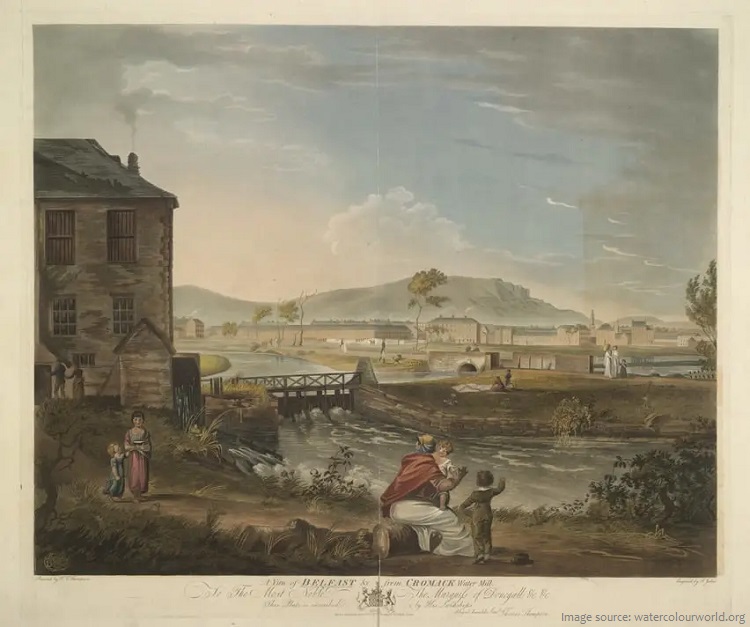 By the late 1730s the castle had been destroyed, but Belfast was beginning to acquire economic importance, superseding both Lisburn as the chief bridge town and Carrickfergus as a port.

Following mechanization of the spinning and weaving of linen, Belfast became one of the greatest linen centres in the world – earning it the nickname “Linenopolis”.

By the time it was granted city status in 1888, it was a major centre of Irish linen production, tobacco-processing and rope-making. Shipbuilding was also a key industry – the Harland and Wolff shipyard, which built the RMS Titanic, was the world’s largest shipyard. 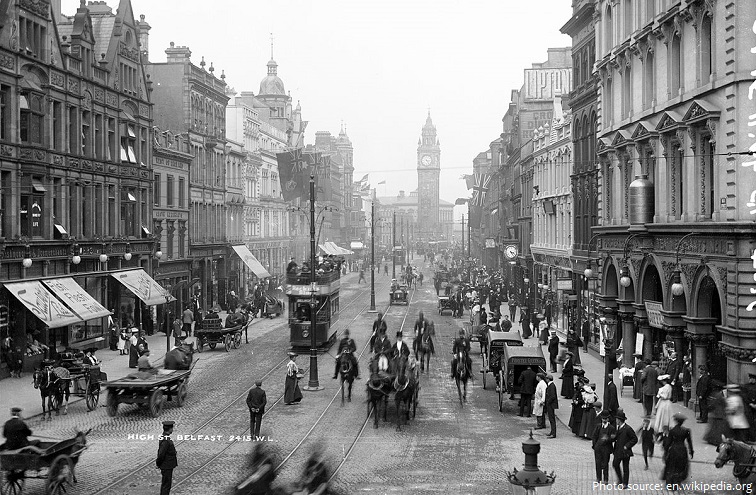 By the early 19th century, Belfast became a major port.

Following the partition of Ireland in 1922, Belfast became the seat of government for Northern Ireland.

Belfast’s status as a global industrial centre ended in the decades after the Second World War.

The city is still a port with commercial and industrial docks, including the Harland and Wolff shipyard, dominating the Belfast Lough shoreline.

Titanic Belfast is a visitor attraction opened in 2012, a monument to Belfast’s maritime heritage on the site of the former Harland & Wolff shipyard in the city’s Titanic Quarter where the RMS Titanic was built. It tells the stories of the Titanic, which hit an iceberg and sank during her maiden voyage in 1912, and her sister ships RMS Olympic and HMHS Britannic. The building contains more than 12,000 square metres (130,000 sq ft) of floor space, most of which is occupied by a series of galleries, private function rooms and community facilities, plus the addition of Hickson’s Point destination bar in March 2018. 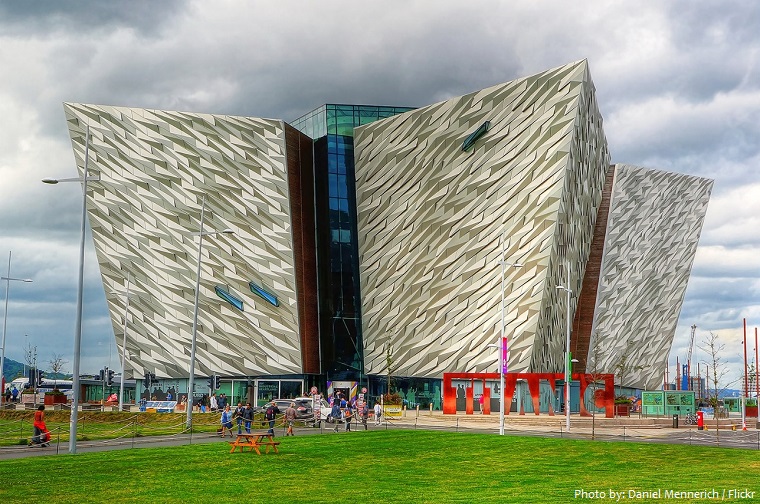 Belfast Castle is set on the slopes of Cavehill Country Park, in a prominent position 120 meters (400 feet) above sea level. Its location provides unobstructed views of the city of Belfast and Belfast Lough. Built by the Normans in the 12th Century, the original Belfast castle sat within the city of Belfast itself. In 1611, Sir Arthur Chichester, replaced the old castle with one made of stone and timber, building on the same spot as the original castle. 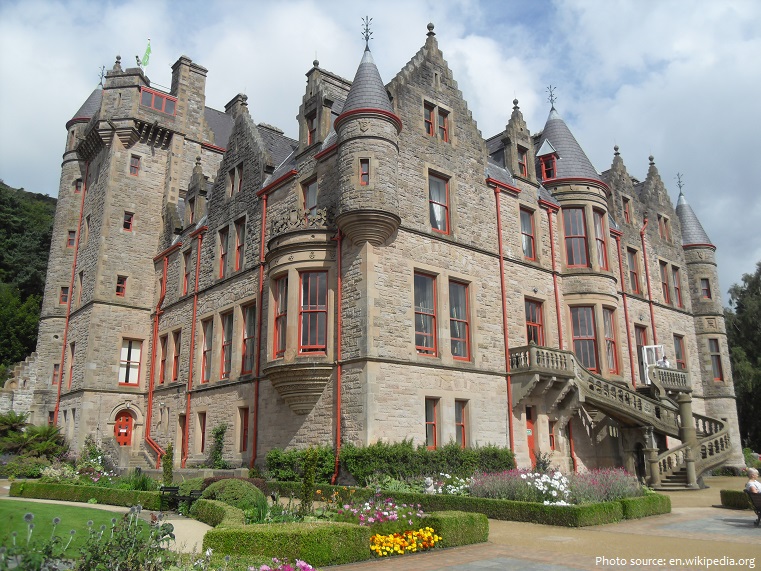 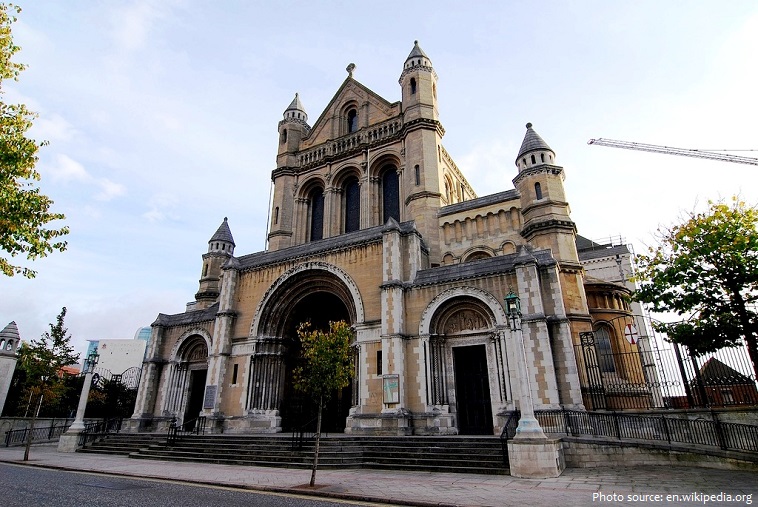 Belfast City Hall is the civic building of Belfast City Council located in Donegall Square. It faces North and effectively divides the commercial and business areas of the city centre. It is a Grade A listed building. The site now occupied by Belfast City Hall was once the home of the White Linen Hall, an important international Linen Exchange. 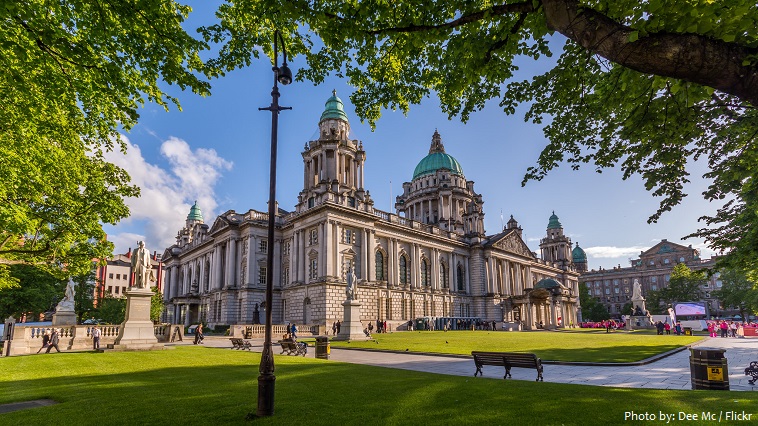 St George’s Market is the last surviving Victorian covered market in Belfast. Belfast Corporation (now Belfast City Council) commissioned the building of St George’s Market, which was built in three phases between 1890 and 1896. Before 1890 St George’s Market was an open market and most likely contained a slaughterhouse and a meat market. Today it is a thriving market with 300 traders, crafters musicians and food vendors. 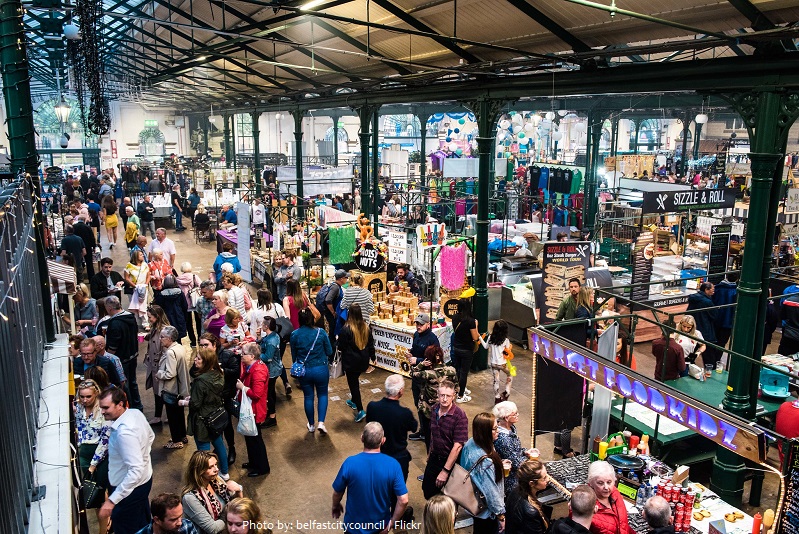 Botanic Gardens is a public garden in Belfast. Occupying 11 hectares (28 acres) of south Belfast, the gardens are popular with office workers, students and tourists. The gardens opened in 1828 as the private Royal Belfast Botanical Gardens. It became a public park in 1895. 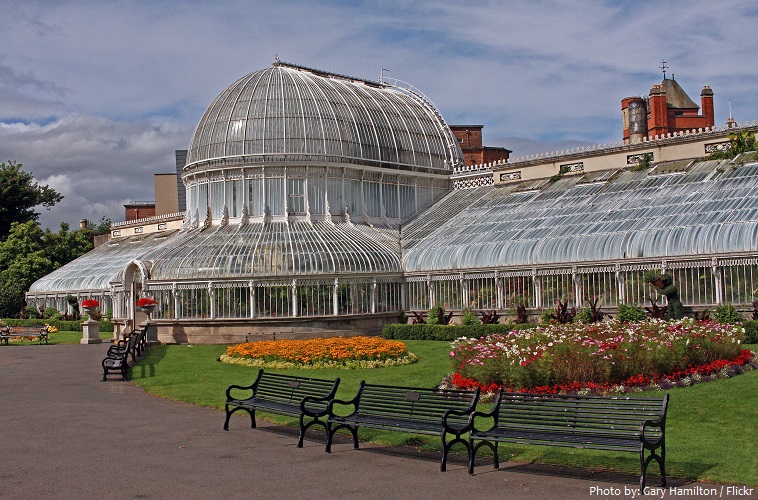 The Ulster Museum, located in the Botanic Gardens, has around 8,000 square metres (86,000 square feet) of public display space, featuring material from the collections of fine art and applied art, archaeology, ethnography, treasures from the Spanish Armada, local history, numismatics, industrial archaeology, botany, zoology and geology. It is the largest museum in Northern Ireland, and one of the components of National Museums Northern Ireland. 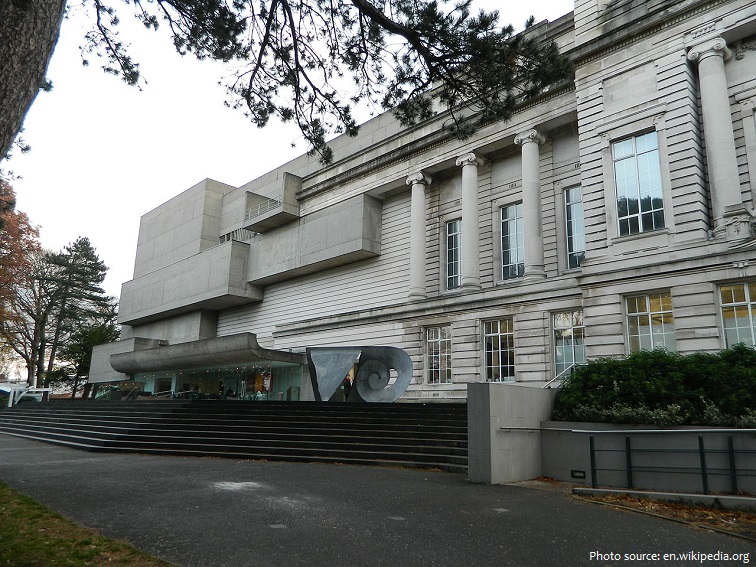 The Albert Memorial Clock, more commonly referred to as the Albert Clock, is a clock tower situated at Queen’s Square. In 1865 a competition for the design of a memorial to Queen Victoria’s late Prince Consort, Prince Albert, was won by W. J. Barre. The Albert Clock was completed in 1869 and is one of the best known landmarks of Belfast. 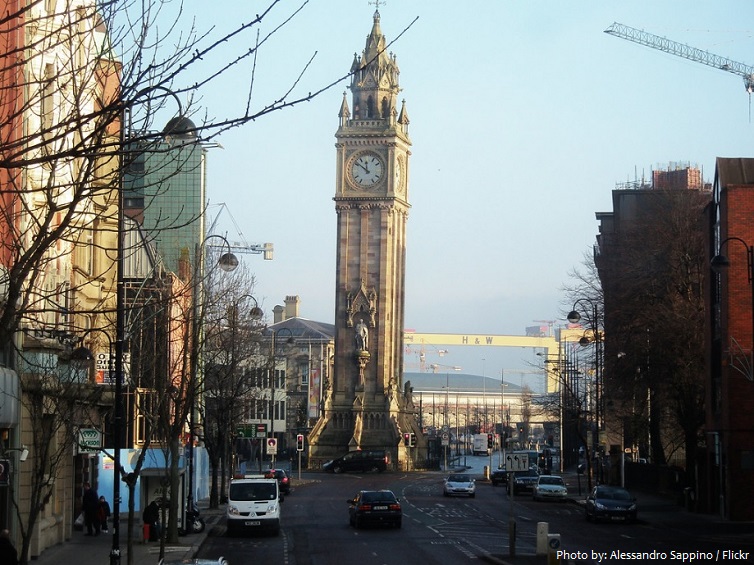 Parks and gardens are an integral part of Belfast’s heritage, and home to an abundance of local wildlife and popular places for a picnic, a stroll or a jog. Numerous events take place throughout including festivals such as Rose Week and special activities such as bird watching evenings and great beast hunts.

Belfast’s population is evenly split between its Protestant and Catholic residents.