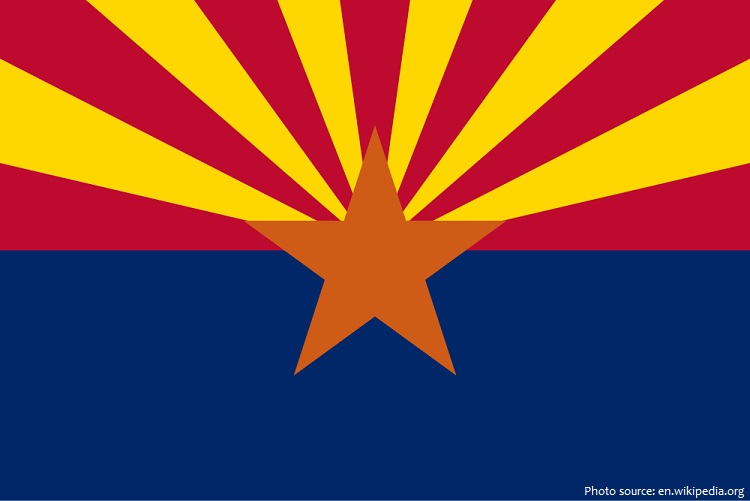 Arizona is a U.S. state in the southwestern region of the United States.

Arizona is the 6th largest state in the United States in terms of total area with 295,234 square kilometers (113,990 square miles). 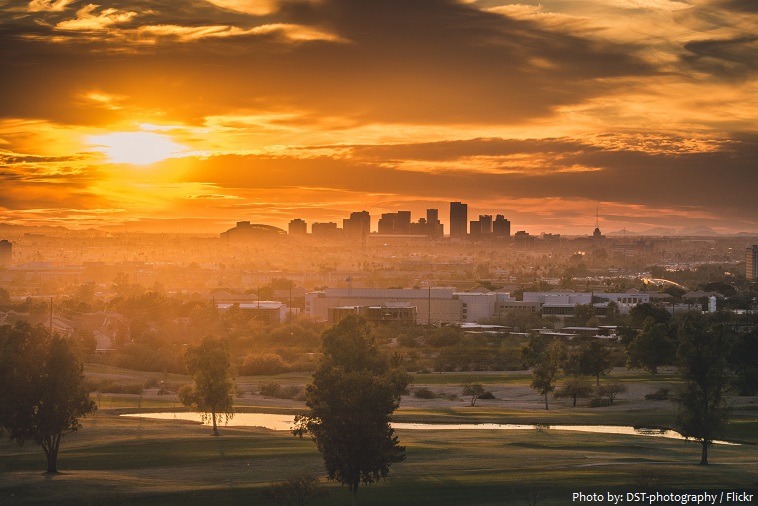 About one-quarter of the state is made up of Indian reservations that serve as the home of 27 federally recognized Native American tribes, including the Navajo Nation, the largest in the state and the United States, with more than 300,000 citizens.

Arizona is considered one of the Four Corner states and it is best known for its desert landscape and highly varied topography. High mountains and plateaus cover more than half of the state.

Humphreys Peak is the highest natural point in Arizona, with an elevation of 3,851 meters (12,633 feet) and is located within the Kachina Peaks Wilderness in the Coconino National Forest. 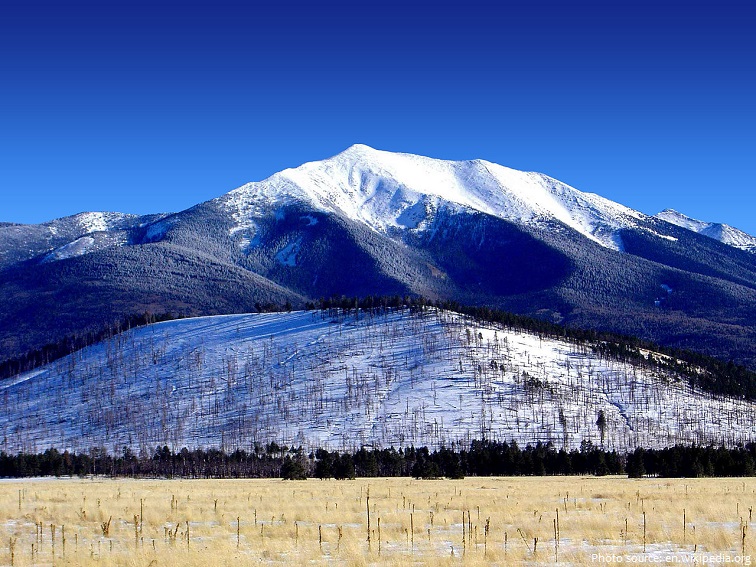 The Colorado River forms most of Arizona’s western border with California and Nevada. It also runs through the heart of the Grand Canyon. Additional rivers of size include the Little Colorado, Gila and Salt. 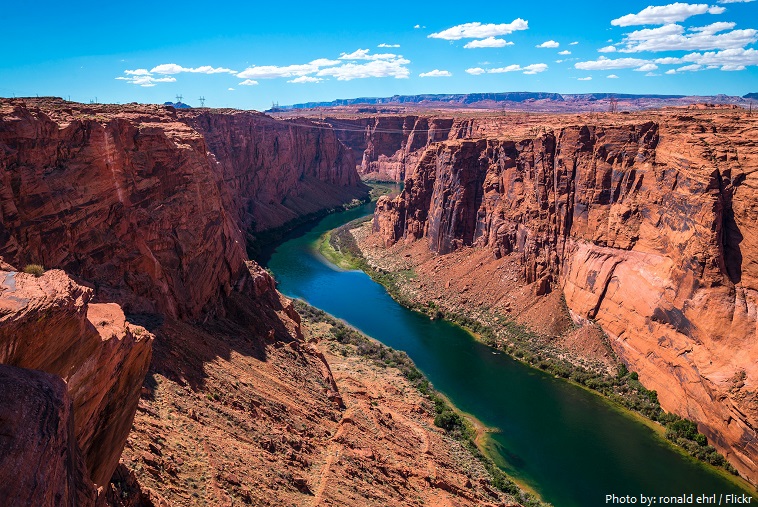 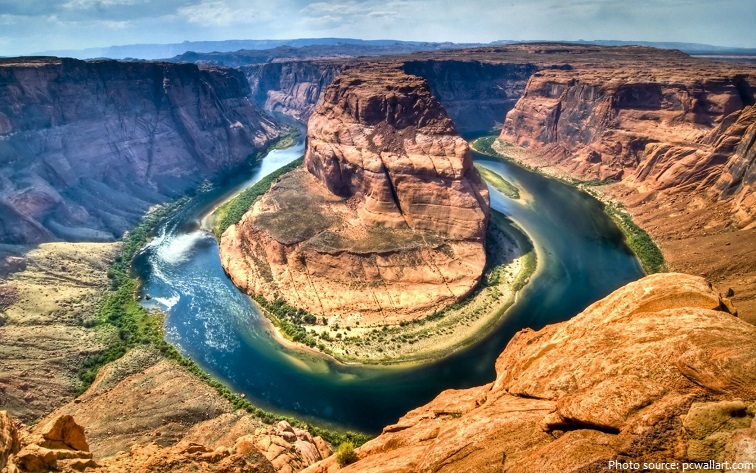 The state’s most dramatic feature, the Grand Canyon, snakes through the northwest corner. Carved deep into the earth by wind and water, it’s estimated to be over 5 million years old. The Grand Canyon is 446 kilometers (277 miles) long, up to 29 kilometers (18 miles) wide and attains a depth of 1,800 meters (5,905 feet). 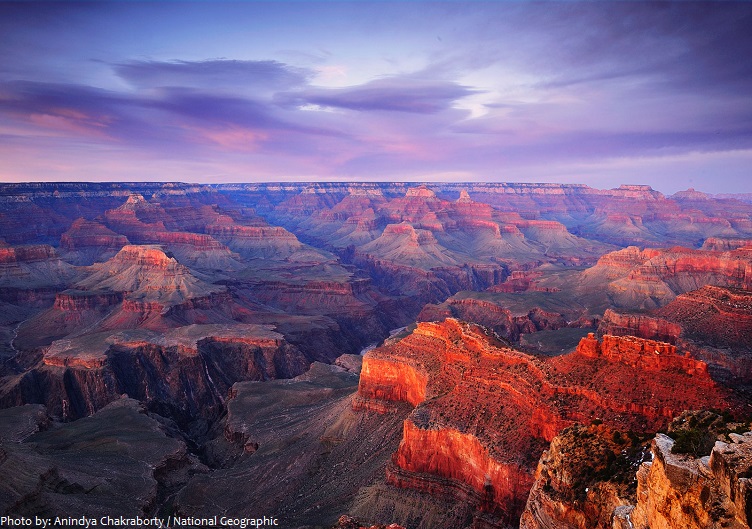 Cathedral Rock is a famous landmark on the Sedona, Arizona skyline, and is one of the most-photographed sights in Arizona. The summit elevation of Cathedral Rock is 1,514 meters (4,967 feet). Geologically, Cathedral Rock is carved from the Permian Schnebly Hill formation, a redbed sandstone formed from coastal sand dunes near the shoreline of the ancient Pedregosa Sea. 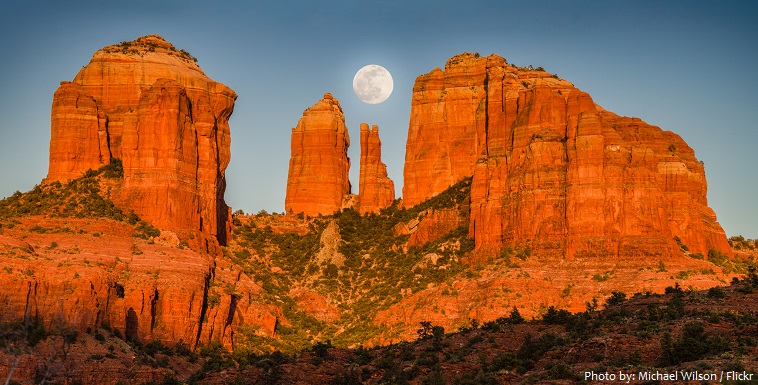 One of the most iconic images of the Southwest are the sandstone buttes that dominate Monument Valley. This area, straddling the border between Arizona and Utah, includes jagged rock formations, stone spires and buttes, and sand dunes. 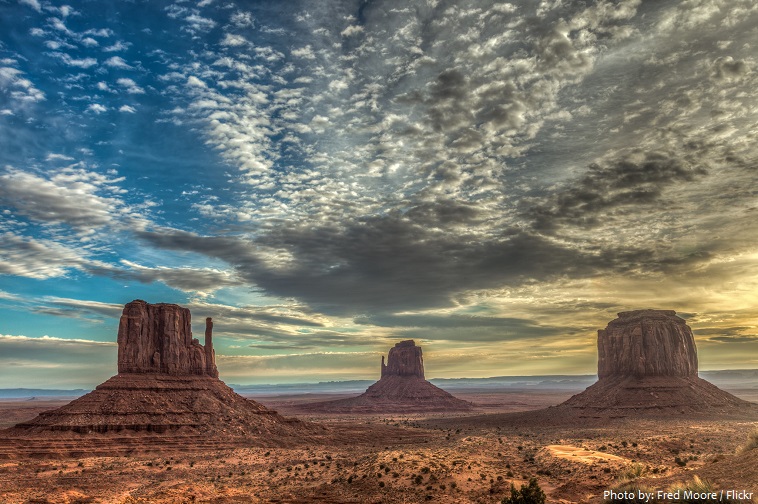 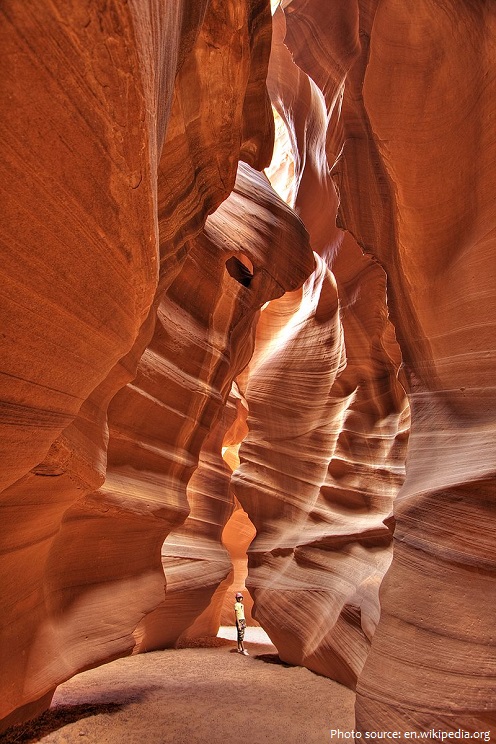 Havasu Falls is a waterfall of Havasu Creek, located in the Grand Canyon. It consists of one main chute that drops over a 27-to-30-meter (90-to-100-foot) vertical cliff into a series of plunge pools. High calcium carbonate concentration in the water creates the vivid blue-green color and forms the natural travertine dams that occur in various places near the falls. 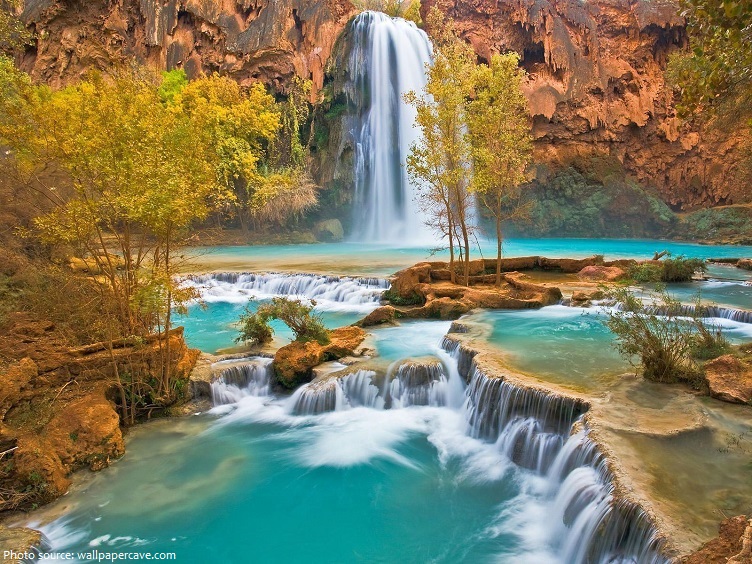 Arizona, with 18, has the largest number of national monuments, followed by California with 17 and New Mexico with 14.

The two largest manmade lakes in the U.S. are Lake Mead and Lake Powell – both located in Arizona.

Meteor Crater is a meteorite impact crater approximately 37 miles (60 km) east of Flagstaff and 18 miles (29 km) west of Winslow in the northern Arizona deser. It is one of the best preserved meteor crater in the world. 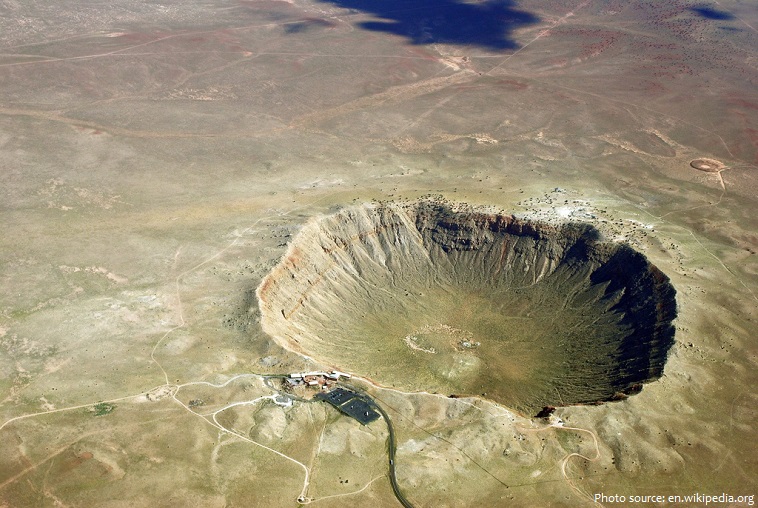 For thousands of years before the modern era, Arizona was home to numerous Native American tribes. Hohokam, Mogollon and Ancestral Puebloan cultures were among the many that flourished throughout the state.

Arizona is the last state to join the union in the contiguous United States. Originally part of New Mexico, the land was ceded to the United States in 1848, and became a separate territory in 1863. It became the 48th state on February 14, 1912.

Copper was discovered in 1854, and copper mining was Arizona’s premier industry until the 1950s. After World War II, the widespread availability of refrigeration and air conditioning caused Arizona’s population to boom and Phoenix to become one of the fastest growing cities in America. 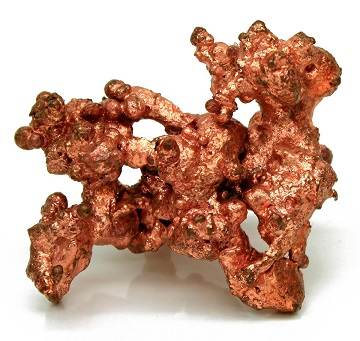 Rooster Cogburn Ostrich Ranch in Picacho, Arizona is the largest privately-owned ostrich ranch in the world outside of South Africa.

The Gunfight at the O.K. Corral was a 30-second shootout between lawmen and members of a loosely organized group of outlaws called the Cowboys that took place at about 3:00 p.m. on Wednesday, October 26, 1881, in Tombstone, Arizona Territory.

Lake Havasu City holds the all-time record high temperature in Arizona history with 128 °F (53.3 °C) recorded on June 29, 1994. This temperature is also the highest for a town or city in the Western Hemisphere.

The world’s largest rosebush is of the Lady Banksia variety. The rosebush’s canopy measures 790 square meters (8,500 square feet), its trunk has a circumference of around 3.6 meters (12 feet). It was planted in Tombstone, Arizona, in 1885. 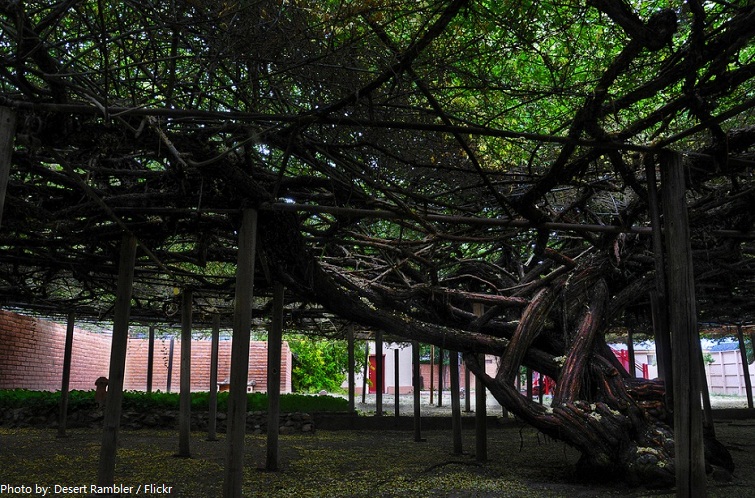 The Musical Instrument Museum is located in Phoenix. Opened in April 2010, it is the largest museum of its type in the world. The collection of over 15,000 musical instruments and associated objects includes examples from nearly 200 countries and territories, representing every inhabited continent.

The original London Bridge was shipped stone by stone and reconstructed in Lake Havasu City.

Tombstone, Ruby, Gillette, and Gunsight are among the ghost towns scattered throughout the state.

The pure white waxy blossom of the giant saguaro cactus was designated the state flower of Arizona in 1931. 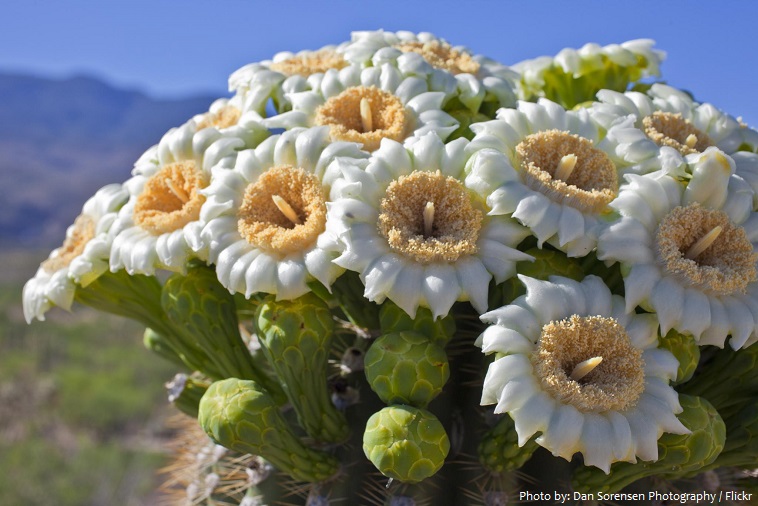 In 1954, the State of Arizona named the palo verde as its state tree. Its name means green stick and it blooms a brilliant yellow-gold in April or May.

The cactus wren was officially recognized as the state bird of Arizona in 1931.

The unique ringtail was designated the state mammal of Arizona in 1986.

The Arizona ridge-nosed rattlesnake was designated the official state reptile of Arizona in 1986.

The Arizona tree frog was designated the state amphibian of Arizona in 1986.

The endangered Apache trout was designated the state fish of Arizona in 1986.

Blue and gold were designated the state colors of Arizona in 1915.

Turquoise was designated the state gemstone of Arizona in 1974.

The newest of state symbols, the two-tailed swallowtail became the state butterfly in 2001. 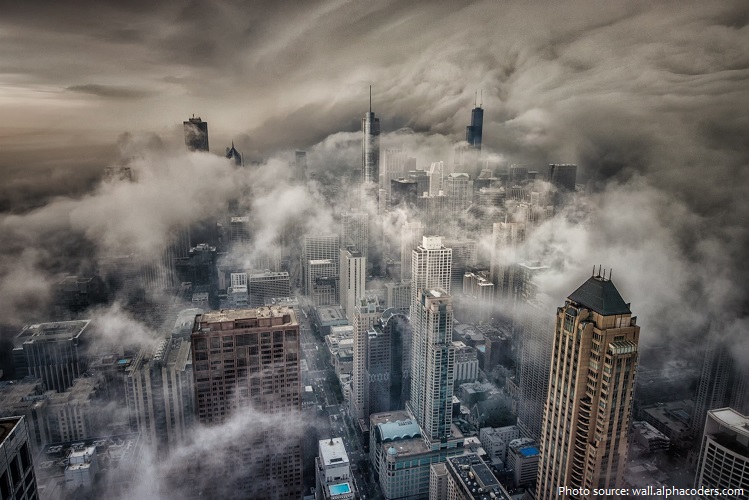