Angel Falls is a waterfall in Venezuela.

Located in the Canaima National Park, the biggest national park in Venezuela, it is the third biggest of the world and is known for its breathtaking beauty.

The waterfall drops over the edge of the Auyantepui mountain (Table mountain) in the Canaima National Park , a UNESCO World Heritage site in the Gran Sabana region of Bolivar State. 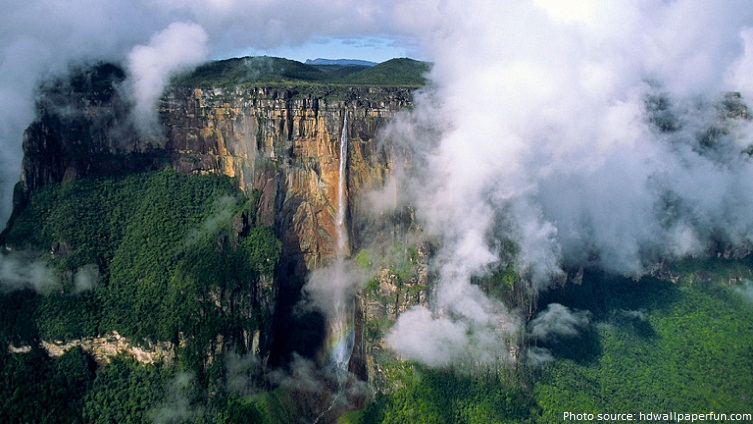 Angel Falls is three times as tall as Paris landmark, the Eiffel Tower.

During warmer and drier seasons, the water of Angel Falls evaporates even before it touches the ground, forming a mist.

During the rainy season they may divide into two separate waterfalls. When the water level is high it is possible to feel the spray up to a 1,5 kilometer(1 mile) away.

The waterfall has been known as the “Angel Falls” since the Mid-20th century; they are named after Jimmie Angel, a US aviator, who was the first person to fly over the falls.

Returning on 9 October 1937, Angel tried to land his Flamingo monoplane El Río Caroní atop Auyan-tepui, but the plane was damaged when the wheels sank into the marshy ground. Angel and his three companions, including his wife Marie, were forced to descend the tepui on foot. It took them 11 days to make their way back to civilization by the gradually sloping back side, but news of their adventure spread and the waterfall was named Angel Falls in his honor. The name of the waterfall—”Salto Angel“—was first published on a Venezuelan government map in December 1939.

Angel’s ashes were scattered over the falls on 2 July 1960.

According to accounts of Venezuelan explorer Ernesto Sánchez La Cruz, he spotted the falls in 1912, but he did not publicize his discovery.

Venezuelan leader Hugo Chavez was promoting to change the name of the Falls to their original name given by the Pemon Indians many centuries ago, Kerepakupai Vena meaning “the deepest place waterfalls”. However, the decision has never been made official so the Falls are still known by the name of the American aviator Jimmie Angel.

Sir Walter Raleigh described what was possibly a tepuy (table top mountain), and he is said to have been the first European to view Angel Falls, although these claims are considered far-fetched.

Angel Falls are also known by local names such as ‘Big River’ and ‘Tulume Bena’.

Tourists have only been permitted to visit Angel Falls since 1990. 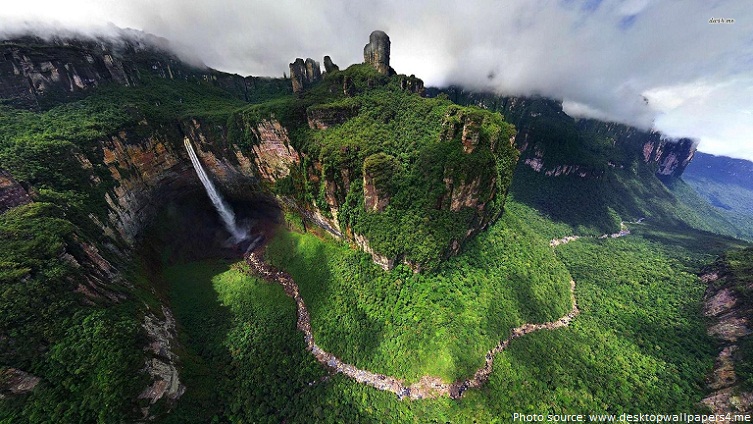 Angel Falls is one of Venezuela’s top tourist attractions.

Angel Falls are best seen between the months of May and November. Between December and April, rainfall is much more infrequent and the falls all but evaporate, diminishing to a dribble.

You can hike up to the falls on foot, take a tour on boat or have a look at everything in a helicopter.

Angel Falls inspired the setting of the Disney animated film Up (2009) although, in the film, the location was called Paradise Falls instead of Angel Falls. It also makes a small appearance in the Disney film Dinosaur.