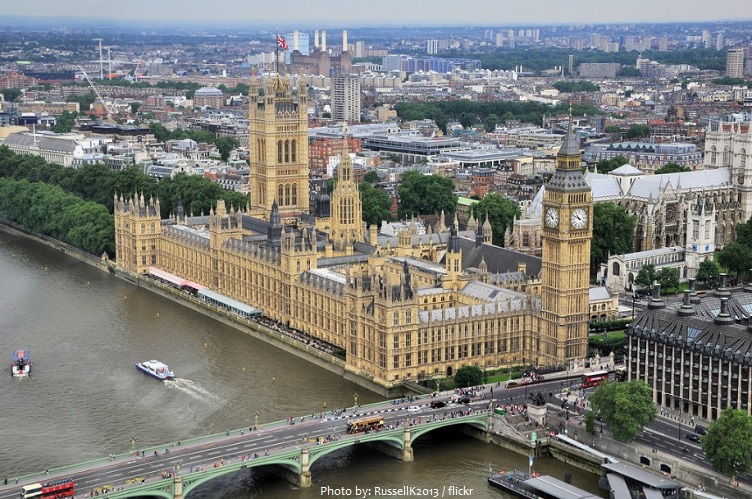 The Westminster Palace was originally a royal residence built in the 11th century CE for Edward the Confessor. In 1512 much of the structure was destroyed in a fire. It was rebuilt, only to be destroyed again in even greater fire in 1834.

The palace that stands today was designed by architect Charles Barry in the Gothic Revival style.

Construction started in 1840 and lasted for 30 years, suffering great delays and cost overruns, as well as the death of both leading architects; works for the interior decoration continued intermittently well into the 20th century.

The more than 300 meters (984 feet) long façade is adorned with countless sculptures, and makes the Houses of Parliament together with the strict design and unique towers one of the finest buildings in London.

The Palace of Westminster contains over 1,100 rooms, 100 staircases and 4.8 kilometers (3 miles) of passageways, which are spread over four floors.

The ground floor is occupied by offices, dining rooms and bars; the first floor (known as the principal floor) houses the main rooms of the Palace, including the debating chambers, the lobbies and the libraries. The top-two floors are used as committee rooms and offices. 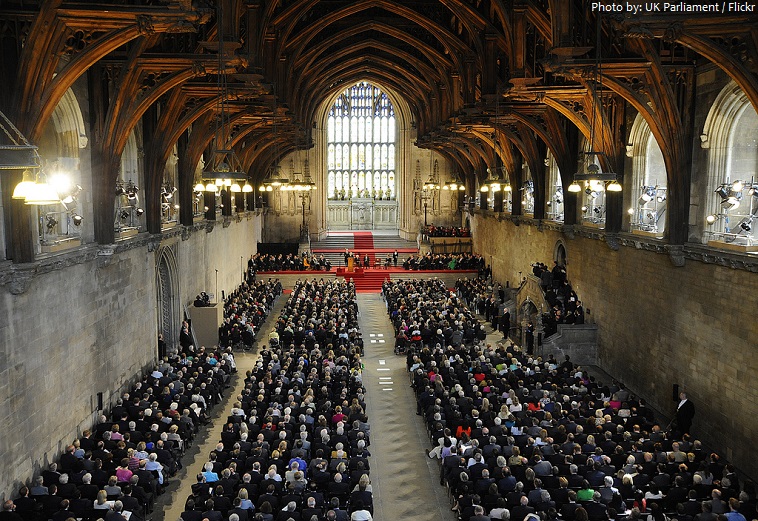 At 33.5 by 13.7 meters (110 by 45 feet), the Royal Gallery is one of the largest rooms in the Palace. It is used for important occasions including state receptions, dinners and parliamentary ceremonies, often with Members of both Houses present. 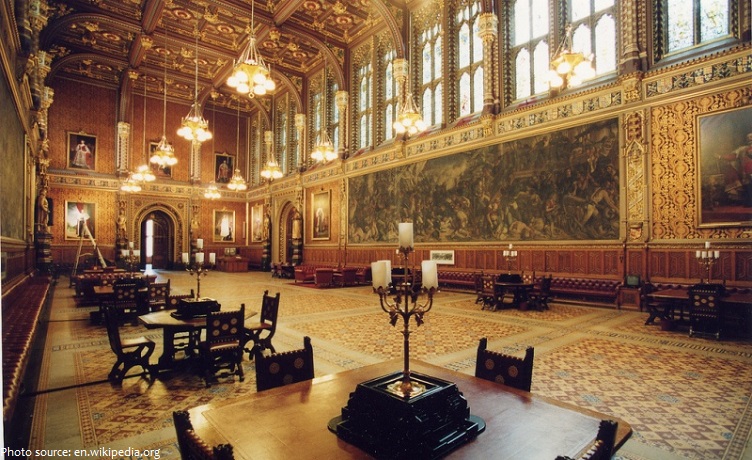 The Commons Chamber, where members of Parliament meet, is decorated in green, according to an old tradition. The Chamber is relatively small, and can accommodate only 427 of the 650 Members of Parliament — during Prime Minister’s Questions and in major debates MPs stand at either end of the House. The Chamber measures 14 by 20.7 meters (46 by 68 feet). 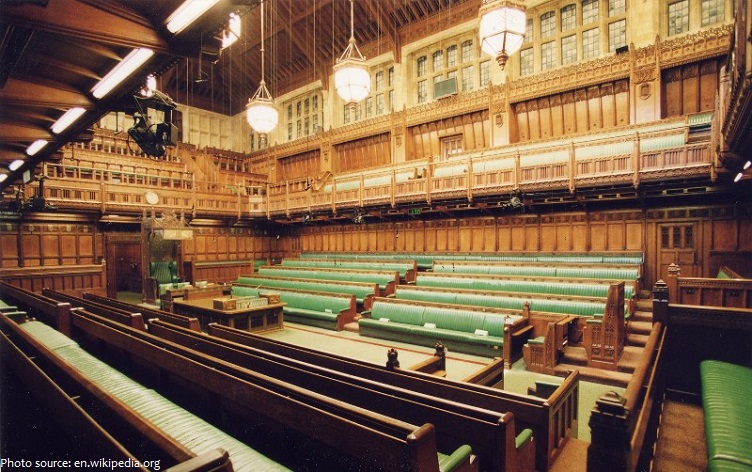 The Lords Chamber is the most lavishly-decorated room in the Palace of Westminster. It measures 13.7 by 24.4 meters (45 by 80 feet). The benches in the Chamber, as well as other furnishings in the Lords’ side of the Palace, are colored red. The upper part of the Chamber is decorated by stained glass windows and by six allegorical frescoes representing religion, chivalry and law. 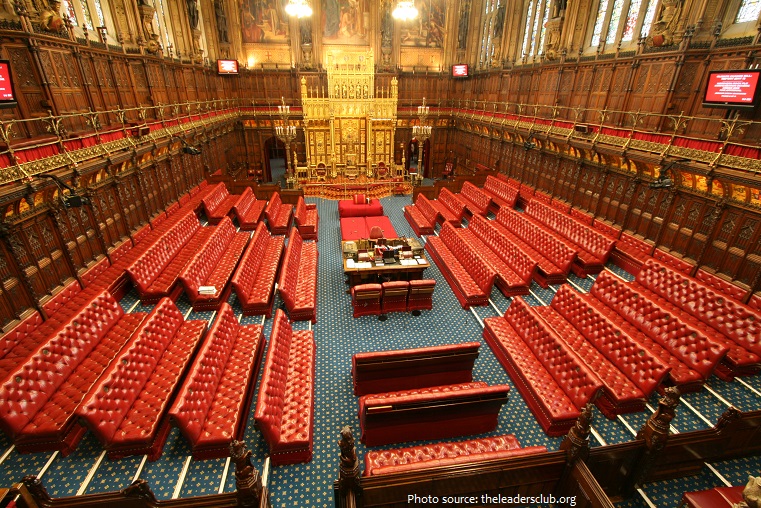 Originally named “Octagon Hall” because of its shape, the Central Lobby is the heart of the Palace of Westminster. It lies directly below the Central Tower and forms a busy crossroads between the House of Lords to the south, the House of Commons to the north, St Stephen’s Hall and the public entrance to the west, and the Lower Waiting Hall and the libraries to the east. 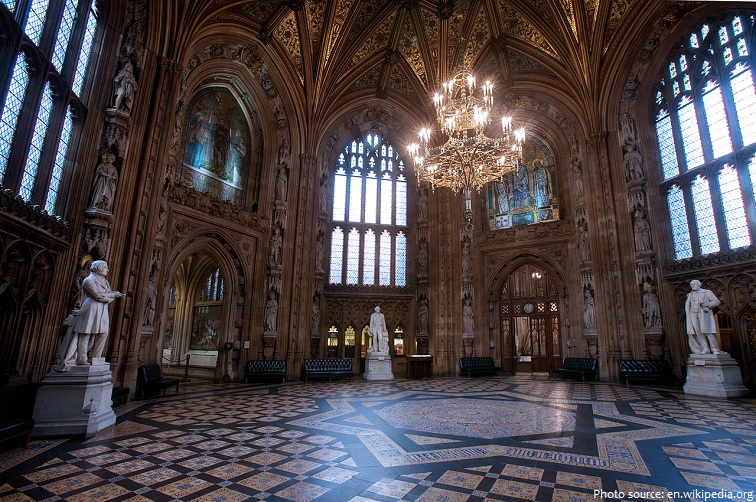 The exterior of the Palace of Westminster — especially the Elizabeth Tower (96.3 meters (316 feet)) which houses the bell known as Big Ben, and its setting on the bank of the River Thames — is recognised worldwide, and is one of the most visited tourist attractions in London. 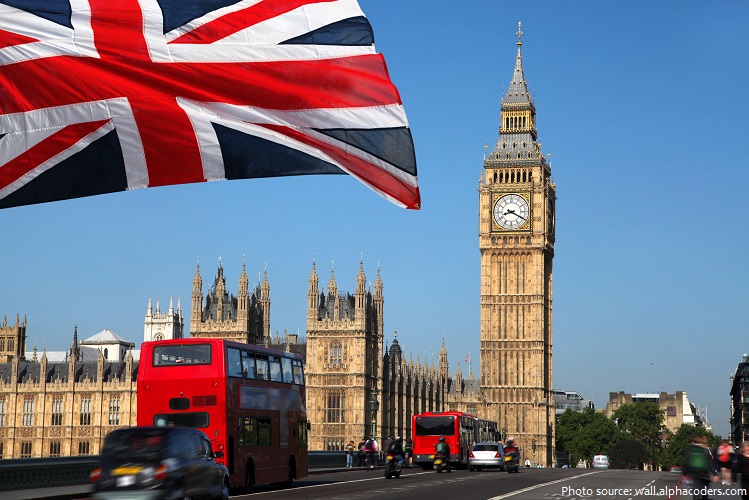 The Victoria Tower is the square tower at the south-west end of the Palace of Westminster in London, facing south and west onto Black Rod’s Garden and Old Palace Yard. At 98.5 metres (323 feet), it is slightly taller than the more famous Elizabeth Tower at the north end of the Palace. 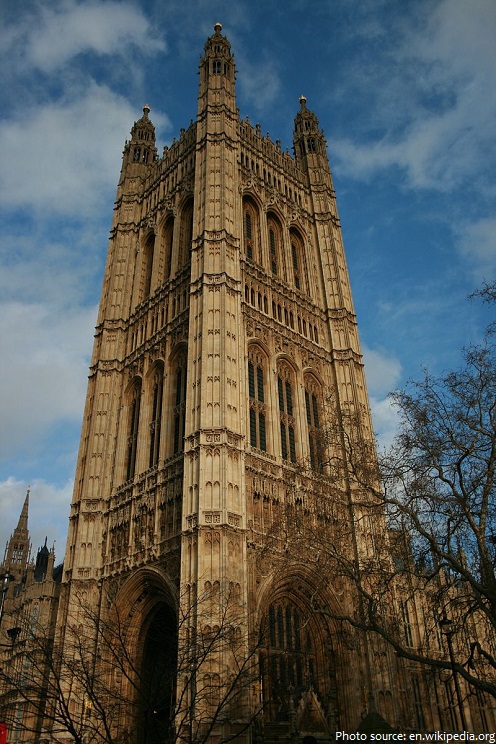 The shortest of the Palace’s three principal towers (at 91 meters (299 feet)), the octagonal Central Tower stands over the middle of the building, immediately above the Central Lobby. 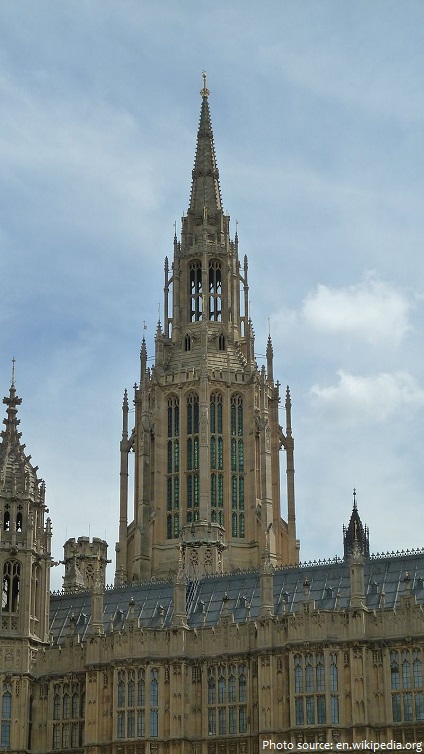 The Palace of Westminster has numerous bars, cafeterias and restaurants. There is also a gymnasium, and even a hair salon; and a rifle range.

The United Nations Educational, Scientific and Cultural Organization (UNESCO) classifies the Palace of Westminster, along with neighbouring Westminster Abbey and St Margaret’s, as a World Heritage Site.

Claude Monet painted a series of oil paintings of the Palace of Westminster, home of the British Parliament, in the fall of 1899 and the early months of 1900 and 1901 during stays in London. All of the series’ paintings share the same viewpoint from Monet’s window or a terrace at St Thomas’ Hospital overlooking the Thames. 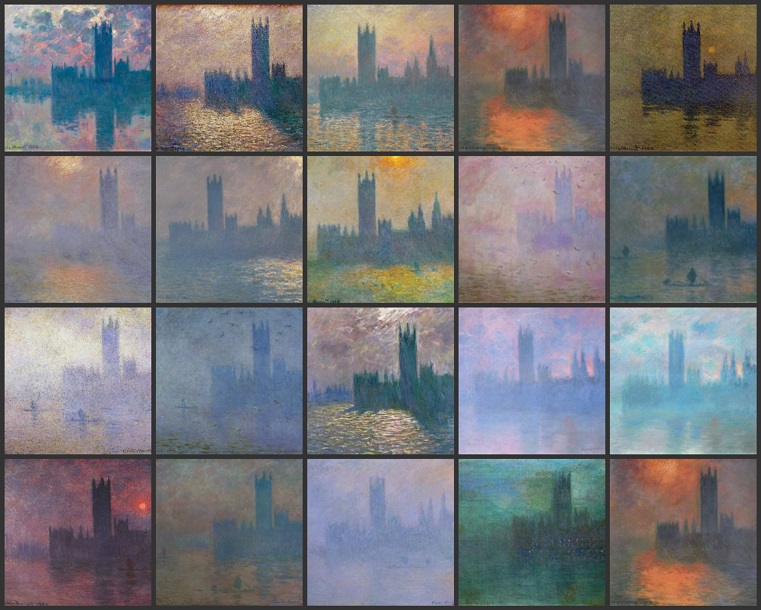 During the Second World War, the Palace of Westminster was hit by bombs on fourteen separate occasions.

Smoking has not been allowed in the chamber of the House of Commons since the 17th century. As a result, Members may take snuff instead and the doorkeepers still keep a snuff-box for this purpose. Despite persistent media rumours, it has not been permitted to smoke anywhere inside the Palace.

Members of Parliament are forbidden from using curse words or other language that might “offend the dignity” of Parliament. MPs also cannot insult their fellow members or accuse them of dishonesty on the floor of the House of Commons.

Animals are not allowed to enter the Palace of Westminster, with the exception of guide dogs for the blind. Sniffer dogs and police horses are also allowed on the grounds.

1 thought on “Interesting facts about the Palace of Westminster”