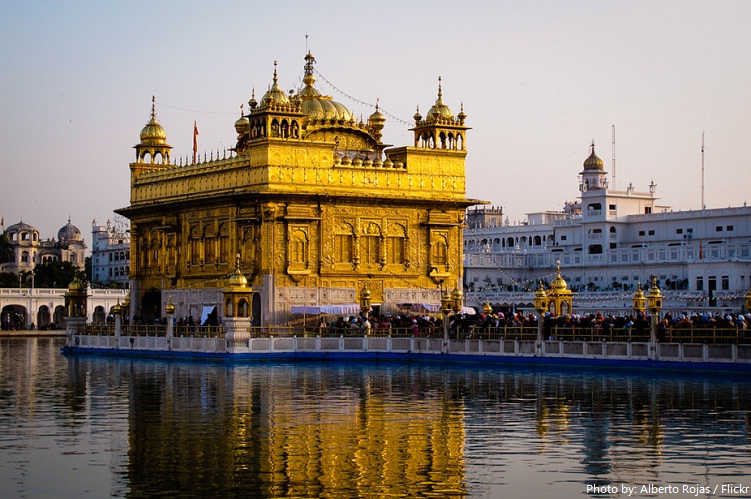 The Golden Temple, also known as Sri Harmandir Sahib or Sri Darbar Sahib is located in the city of Amritsar in the state of Punjab, India.

It is a place of great beauty and sublime peacefulness.

It is the most important shrine of the Sikh religion. 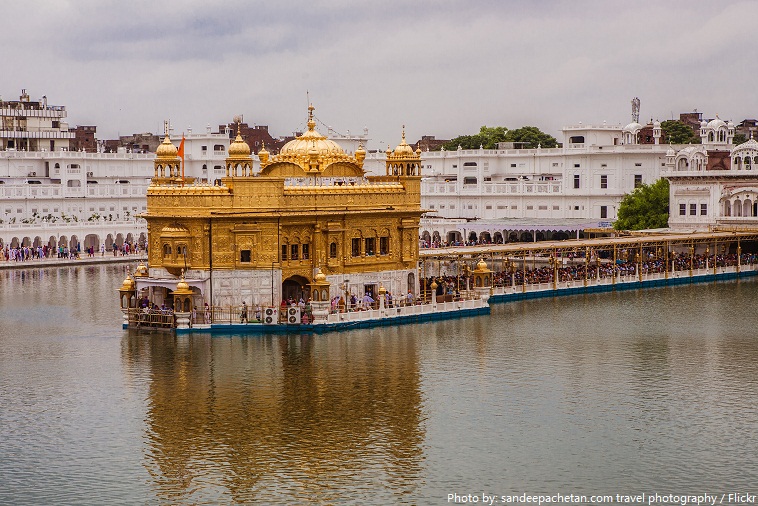 Originally a small lake in the midst of a quiet forest, the site has been a meditation retreat for wandering mendicants and sages since deep antiquity.

The Buddha is known to have spent time at this place in contemplation.

Two thousand years after Buddha’s time, another philosopher-saint came to live and meditate by the peaceful lake.This was Guru Nanak (1469-1539), the founder of the Sikh religion.

The Golden Temple was founded in 1574 by the fourth Sikh guru, Guru Ram Das. 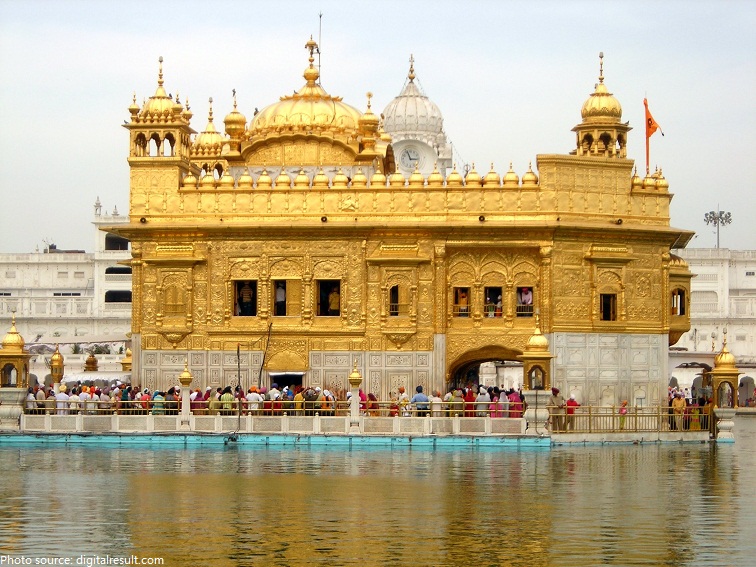 In December 1588, the fifth Sikh Guru, Guru Arjan initiated the construction of the gurdwara and the foundation stone was laid by Muslim saint Mian Mir on 28 December 1588.

Guru Arjan, designed Sri Harmandir Sahib to be built in the center of this holy tank, and upon its construction, installed the Adi Granth, the holy scripture of Sikhism, inside the Harmandir Sahib.

The gurdwara was completed in 1604.

On numerous occasions the temple was destroyed by the Muslims, and each time was rebuilt more beautifully by the Sikhs.

The present-day gurdwara was rebuilt in 1764 by Jassa Singh Ahluwalia with the help of other Sikh Misls. 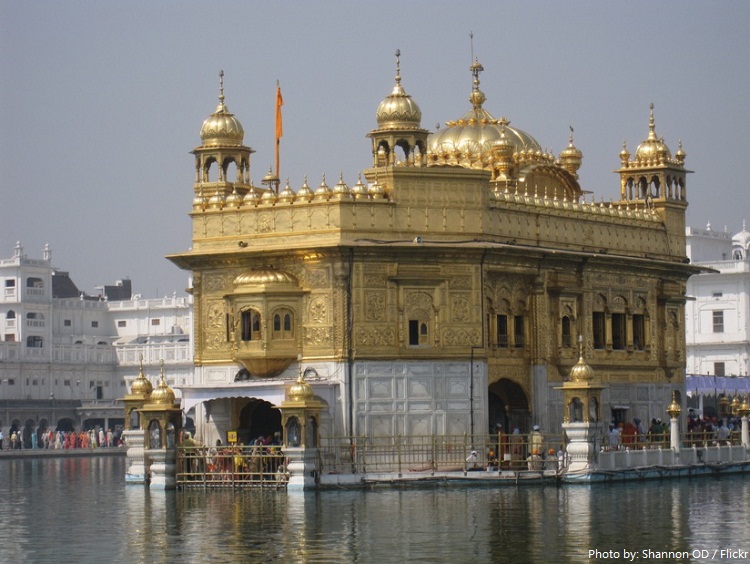 During the reign of Maharaja Ranjit Singh (1780-1839), the Golden Temple was richly ornamented with marble sculptures, golden gilding, and large quantities of precious stones.

Floating at the end of a long causeway, the Golden Temple itself is a mesmerising blend of Hindu and Islamic architectural styles, with an elegant marble lower level adorned with flower and animal motifs in pietra dura work. (as seen on the Taj Mahal). 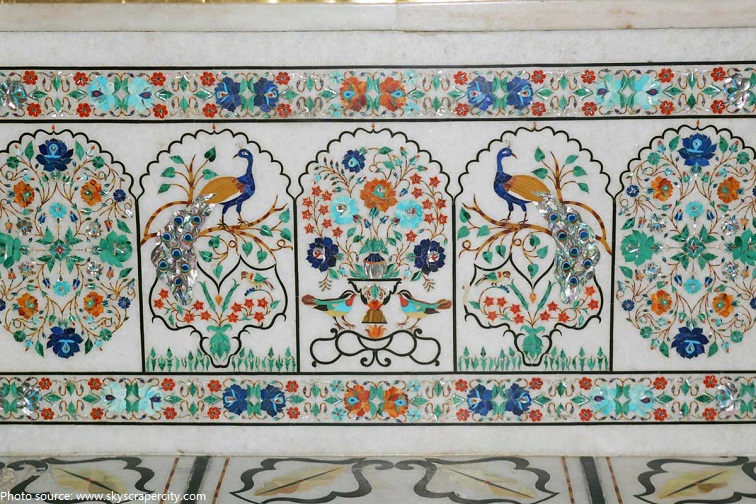 Above this rises a shimmering second level, encased in intricately engraved gold panels, and topped by a dome gilded with 750 kilograms (1653 pounds) of gold. Also inner walls and the door panels exhibit gold work. Special designs have been given to the copper sheets and then they have been covered with gold leaves. 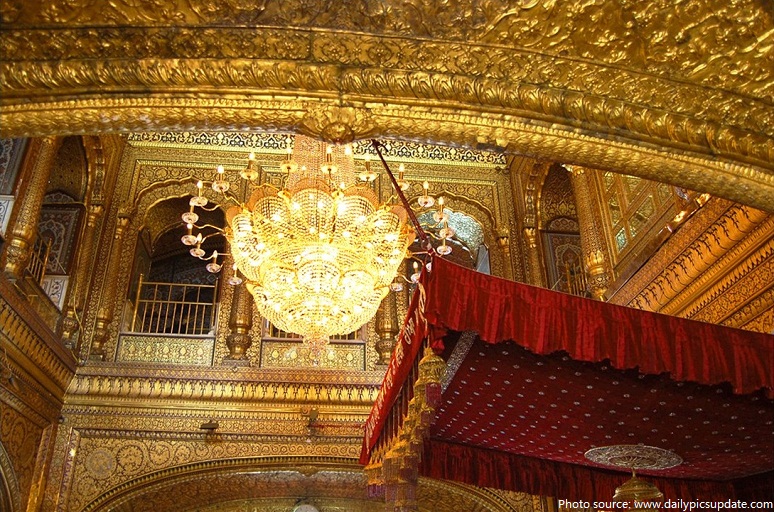 The ceiling of Harminder Sahib is made with gold and precious stones. The main hall of the Golden Temple houses the Guru Granth Sahib, the sacred scripture of the Sikh religion. It is placed on a raised platform under a canopy studded with precious jewels. This scripture is a collection of devotional poems, prayers, and hymns composed by the ten Sikh gurus and various Muslim and Hindu saints.

Structurally, the temple is located on a level below the ground level as it signifies that one must be humble and go down to reach the temple of God. This design is quite opposite to that of the Hindu temples, most of which are built at an elevated level. The Darshani Deorhi Arch stands at the beginning of the causeway to the Harmandir Sahib; it is 6.2 meters (20.3 feet) high and 6 meters (20 feet) in width. The Golden Temple has entrances from all the four direction, signifying the importance of acceptance and openness.

Inside the Golden Temple there are many memorial plaques that commemorate past Sikh historical events, saints and martyrs, including commemorative inscriptions of all the Sikh soldiers who died fighting in World War I and World War II.

The Golden Temple is surrounded by the Sarovar, a large lake or holy tank, which consists of Amrit (“holy water” or “immortal nectar”) and is fed by the Ravi River.

There are three holy trees, each signifying a historical event or Sikh saint.

The largest langar is found at the Golden Temple. It typically feeds roughly 40,000 people a day for free. On religious holidays and weekends, the langar can feed upwards of 100,000 people a day.This incredible feat is made possible through donations and volunteers.

All the diners have to sit on the floor, irrespective of caste, status, wealth or creed, symbolizing the central Sikh doctrine of the equality of all people.