Hyde Park is one of the largest parks in London, and one of the Royal Parks of London.

Hyde Park was created in 1536 by Henry VIII for hunting.

In 1536 King Henry VIII confiscated Hyde Park from the monks of Westminster Abbey.It was used primarily for hunting.

King Charles I opened the park to the public in 1637.The current park layout was planned by architect Decimus Burton in 1825.

London’s Hyde Park is one of the greatest city parks in the world. Covering 142 hectares (350 acres) and with over 4,000 trees, a large lake, a meadow and ornamental flower gardens. 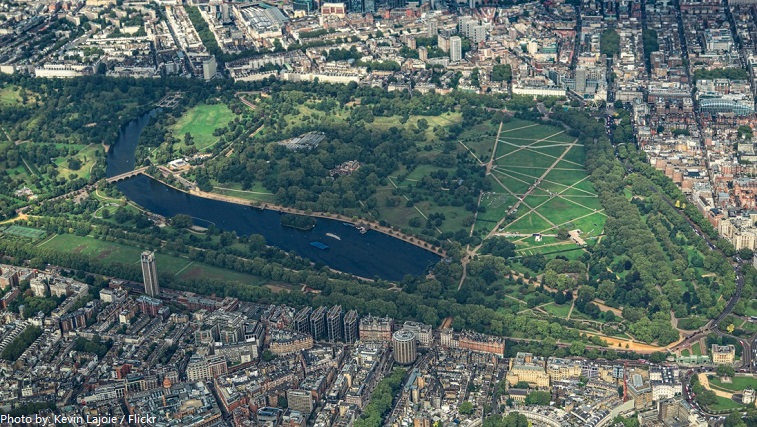 It is home to a number of famous landmarks including the Serpentine Lake, the Serpentine Bridge, Speakers’ Corner, the Diana, Princess of Wales Memorial Fountain, the Joy of Life fountain and the famous statue of Achilles.

The Grand Entrance to the park, also known as Apsley Gate, at Hyde Park Corner next to Apsley House, was erected from the designs of Decimus Burton in 1824–25. 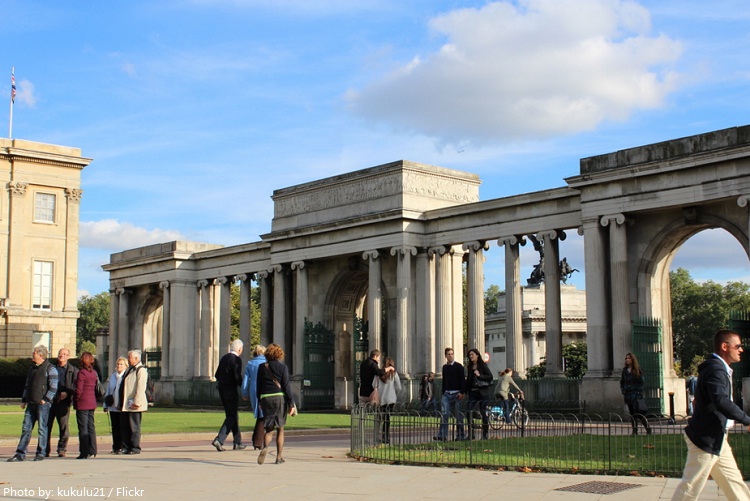 The Serpentine is a 16 hectares (40 acre) recreational lake in Hyde Park, London, England, created in 1730 at the behest of Queen Caroline.

The Serpentine Bridge was built in the 1820s to carry the newly built West Carriage Drive along the boundary between Hyde Park and Kensington Gardens, dividing the lake into the Serpentine (east) and the Long Water (west). 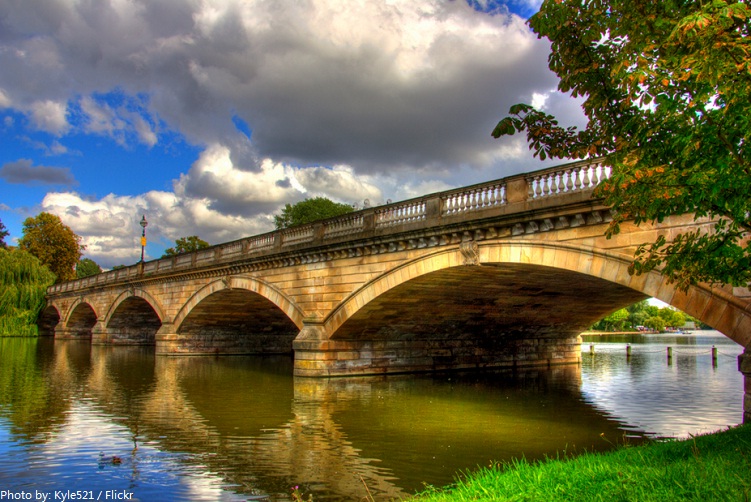 Speakers’ Corner is a traditional site for public speeches and debates since the mid 1800’s when protests and demonstrations took place in Hyde Park.

Near Speakers’ Corner, in the north-east corner of Hyde Park stands the Marble Arch. It was originally built in 1827 as a gateway to Buckingham Palace, but it was moved to its present location in 1851. The design by John Nash was based on the Arch of Constantine in Rome. The Diana, Princess of Wales Memorial Fountain was built with the best materials, talent and technology. It contains 545 pieces of Cornish granite – each shaped by the latest computer-controlled machinery and pieced together using traditional skills. The Joy of Life fountain depicts two bronze figures holding hands while appearing to dance above the water, with four bronze children emerging from the pool. The 5.5 meters (18 feet) statue of Achilles, the Greek hero of the Trojan War, commemorates the soldier and politician, Arthur Wellesley, 1st Duke of Wellington (1769-1852). It was installed by order of King George III and unveiled on 18 June 1822. An assortment of unusual sculptures are scattered around the park, including Drinking Horse, made in the shape of a massive horse head lapping up water, a family of Jelly Babies standing on top of a large black cube, and Vroom Vroom, which resembles a giant human hand pushing a toy car along the ground. The bandstand in Hyde Park is one of the oldest in Britain. It was built in 1869 and originally stood in Kensington Gardens, but moved to Hyde Park in 1886. The octagonal roof gives it particularly good acoustics. The Rose Garden is a spectacular garden featuring rose planting mixed with herbaceous planting to create rich seasonal flower beds and strong scents.The Garden opened in 1994 and was designed by Colvin and Moggridge Landscape Architects. In the Rose Garden you can find the marble Boy and Dolphin Fountain made in 1862 by Alexander Munro, a friend of the Alice in Wonderland author, Lewis Carroll. Hyde Park provides a unique habitat in the heart of London for a diverse variety of species of flora and fauna.

The trees, shrub beds and herbaceous plantings provide rich habitats for song birds including the robin, dunnocks and tits.

A botanical curiosity is the Weeping Beech, Fagus sylvatica pendula, cherished as “the upside-down tree”. At the south end of Hyde park is Rotten Row, a famous bridle path. The road is 6,4 kilometers long (4 miles) and is now used as a horse riding and jogging route.

Hyde Park offers a range of leisure activities from informal games of frisbee through to swimming on The Serpentine and horse riding. Cycling in the park is allowed on all roads and specially designated cycle tracks. From November to January, Hyde Park also offers ice skating, a circus, Ferris wheel, and an ice palace as part of its Winter Wonderland celebration.

The park was the site of the Great Exhibition of 1851, for which the Crystal Palace was designed by Joseph Paxton.

The park has become a traditional location for mass demonstrations.

Hyde Park has been the venue for some famous rock concerts, including the major location for the Live 8 string of benefit concerts where Pink Floyd reunited their classic line up for the first time in over 30 years.Queen played here in one of their most popular shows, in 1976. It is estimated that 150–200 thousand people turned up for the event.However, the record concert attendance is probably for the 1969 concert by the Rolling Stones.According to much of the press, the crowd then was estimated between 250,000 and 500,000.

For the 2012 Summer Olympics, the park hosted the triathlon, which brothers Alistair Brownlee and Jonathan Brownlee took the Gold and Bronze medals for Team GB, and the 10 km open water swimming events.