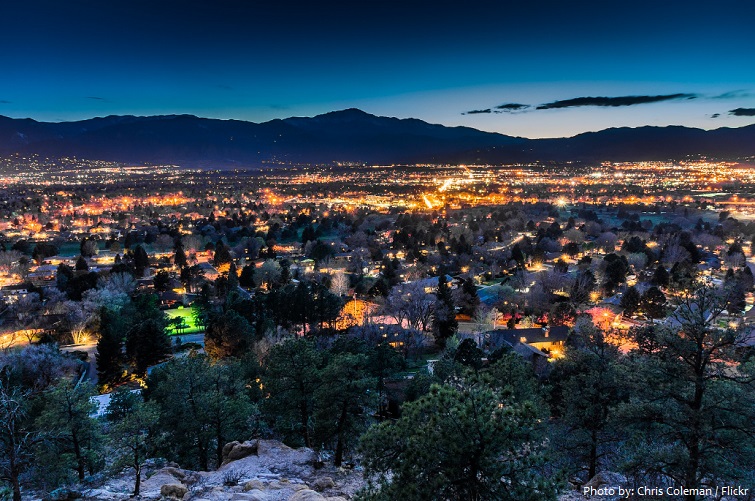 Colorado Springs is the largest city by area in Colorado.

It is located in east central Colorado, on Fountain Creek, 100 kilometers (60 miles) south of Denver.

As of May 2020, the population of Colorado Springs is about 480,000 people. It is the 2nd most populus city in Colorado (after Denver) and the 39th most populous city in the United States. 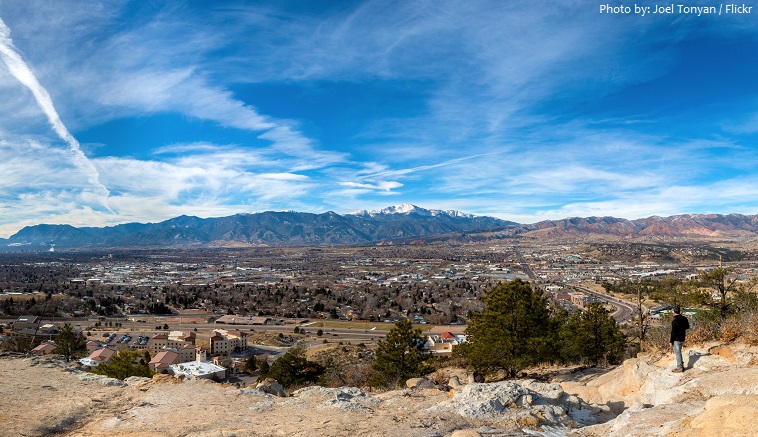 At 1,839 meters (6,035 feet) the city stands over 1.6 km (1 mile) above sea level, though some areas are significantly higher and lower. Colorado Springs is near the base of Pikes Peak, which rises 4,302 meters (14,115 feet) above sea level on the eastern edge of the Southern Rocky Mountains.

The Ute, Arapaho and Cheyenne peoples were the first recorded inhabiting the area which would become Colorado Springs.

Colorado City, was founded in 1871 by General William Jackson Palmer as a resort town. 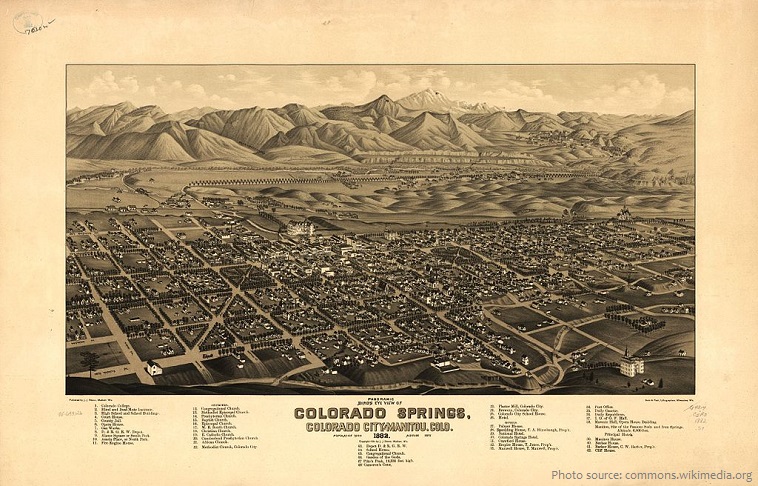 Growth of the area followed the Cripple Creek gold strikes in the 1890s and the promotion of tourism related to the health-resort trade.

From 1899 to 1901 Tesla Experimental Station operated on Knob Hill. It was a laboratory built by inventor Nikola Tesla and for his study of the use of high-voltage, high-frequency electricity in wireless power transmission. Tesla used it for only one year, until 1900, and it was torn down 1904 to pay his outstanding debts. 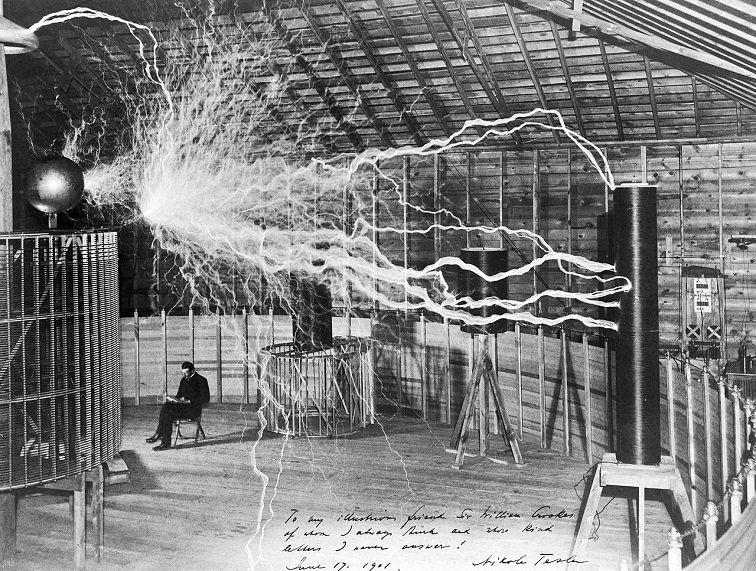 Colorado Springs experienced tremendous growth in the 1980s and 1990s.

Today, Colorado Springs is a regional hub, and makes up the southern end of the state’s populous Front Range urban corridor.

Garden of the Gods is a public park located in Colorado Springs. It was designated a National Natural Landmark in 1971. The Garden of the Gods’ red rock formations were created during a geological upheaval along a natural fault line millions of years ago. Archaeological evidence shows that prehistoric people visited Garden of the Gods about 1330 BC.

The Cheyenne Mountain Zoo is a zoological park located southwest of downtown Colorado Springs. At an elevation of 2,046 meters (6,714 feet) above sea level it is the highest zoo in America. The zoo houses more than 750 animals, representing nearly 150 different species, with more than 30 endangered species. 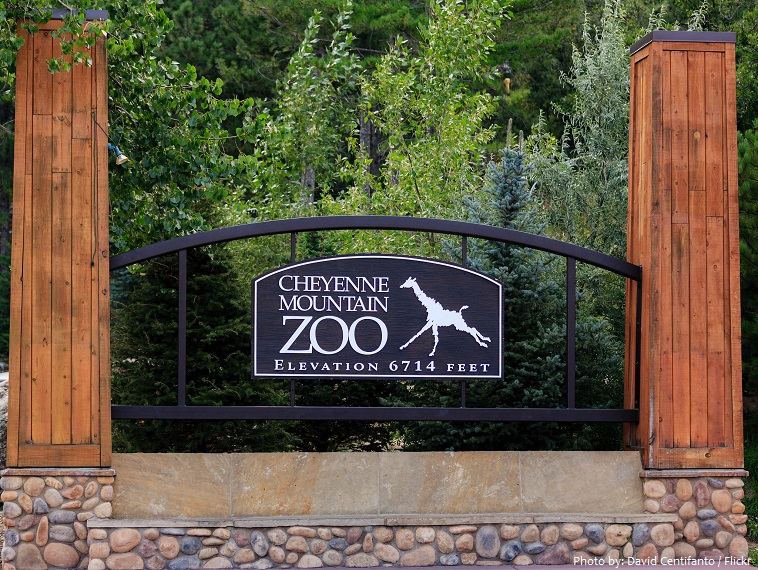 Pikes Peak is the highest summit of the southern Front Range of the Rocky Mountains. The ultra-prominent 4,302-meter (14,115-foot) fourteener is located in Pike National Forest, 12 miles (19 km) west of downtown Colorado Springs. The mountain is named in honor of American explorer Zebulon Pike (though he was unable to reach the summit). The summit is higher than any point in the United States east of its longitude. 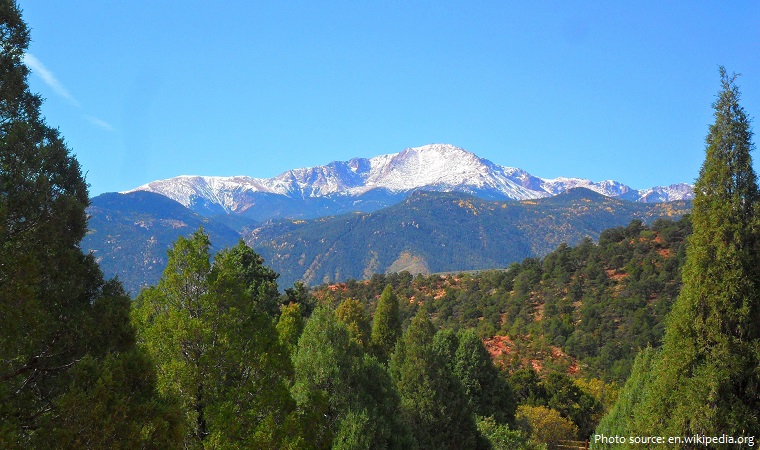 The Colorado Springs Pioneers Museum is located at 215 S. Tejon Street in Colorado Springs. The granite building with a domed clock tower was the El Paso County Courthouse building from 1903 to 1973. The museum, which moved to this location in 1979, has fine arts, artifacts and archival collections that document the Pikes Peak region. The building is on the National Register of Historic Places. 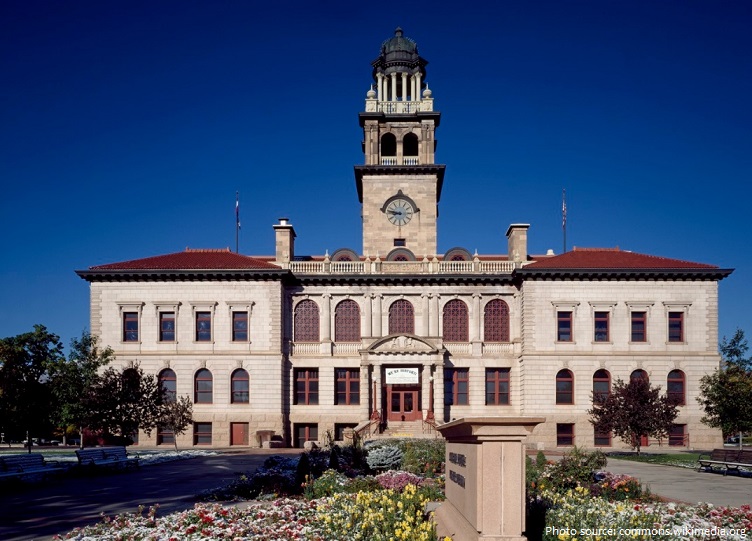 The Colorado Springs Fine Arts Center at Colorado College is an arts center located just north of downtown Colorado Springs. It is home to spectacular galleries for the FAC’s permanent collection and world-class special exhibitions. The museum’s collection of over 20,000 works features masterworks by such American artists as Richard Diebenkorn, Georgia O’Keeffe, Walt Kuhn, John Singer Sargent, Dale Chihuly, and artists connected to its beginnings as the Broadmoor Art Academy, established in 1919, as well as one of the strongest collections of Latin American and American Indian art in the nation. 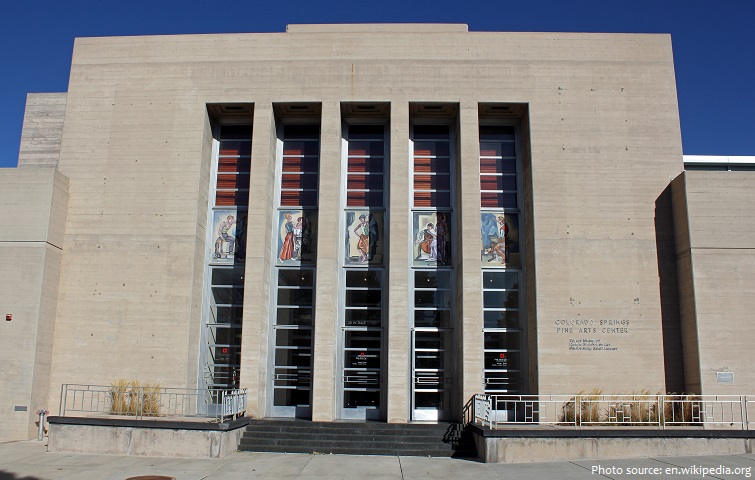 Old Colorado City, was once a town, but it is now a neighborhood within the city of Colorado Springs. Its commercial district was listed on the National Register of Historic Places in 1982. It was founded during the Pikes Peak Gold Rush of 1859 and was involved in the mining industry, both as a supply hub and as a gold ore processing center beginning in the 1890s. 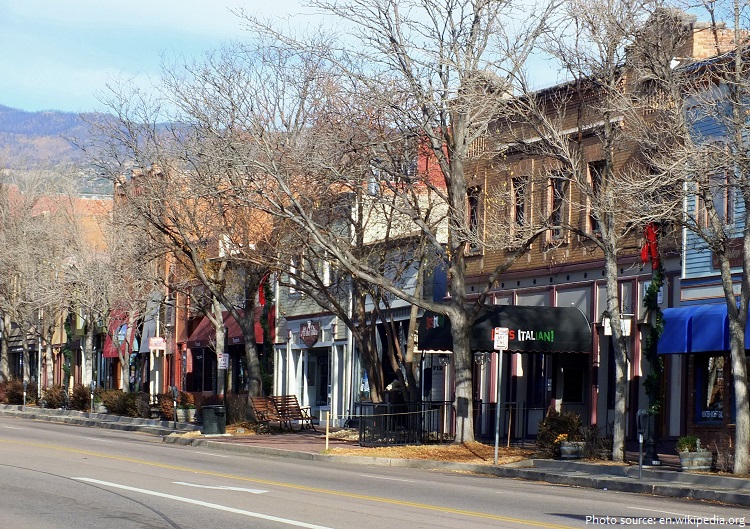 Peterson Air and Space Museum is Colorado’s oldest aviation museum. It is located inside Peterson Air Force Base, Colorado Springs. Admission to the museum is free, but access is controlled due to security concerns. 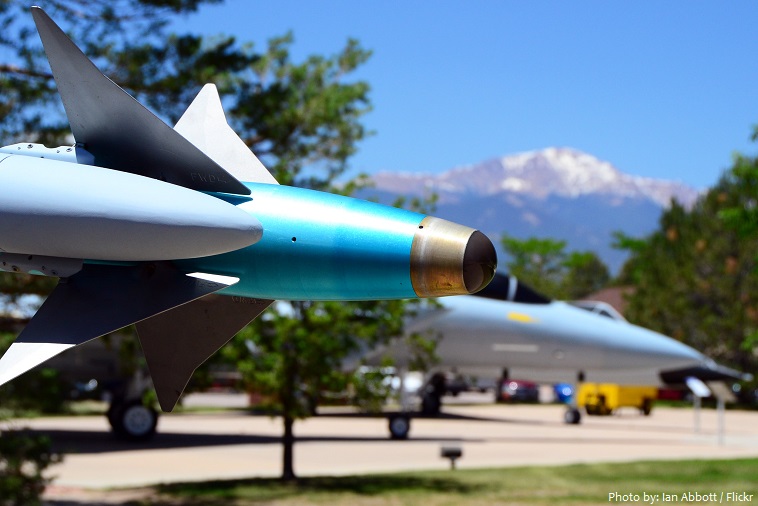 The Broadmoor Seven Falls is a series of seven cascading waterfalls of South Cheyenne Creek in South Cheyenne Cañon, Colorado Springs. It has been a privately-owned tourist attraction since it was opened in the early 1880s. 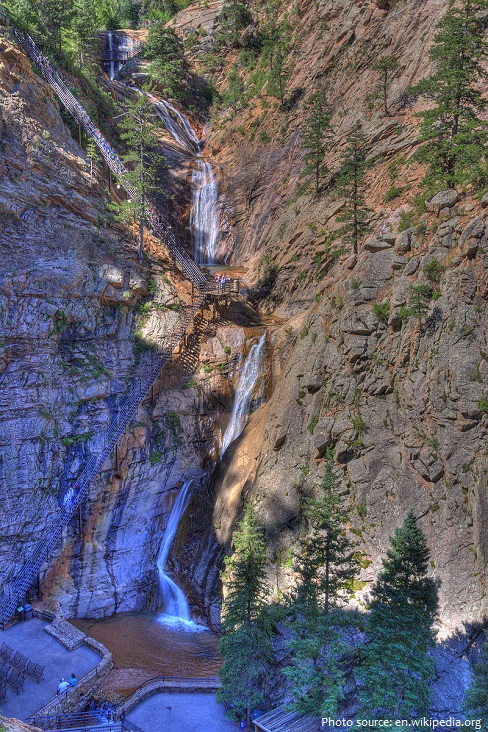 Glen Eyrie is an English Tudor-style castle built in 1871 by General William Jackson Palmer, the founder of Colorado Springs. There are 17 guest rooms (12 Deluxe guest rooms and 5 premier guest rooms) in the castle, as well as 7 meeting rooms including the Castle Great Hall (2200-square-foot room that can hold up to 240 people) and 2 dining rooms (the Castle King James Hall has seating for 180 people and the Castle Music & Library rooms for seating for up to 58 people). This house was his and his wife’s dream home, and is near Colorado Springs in the northwest foothills just north of the Garden of the Gods rock formations. 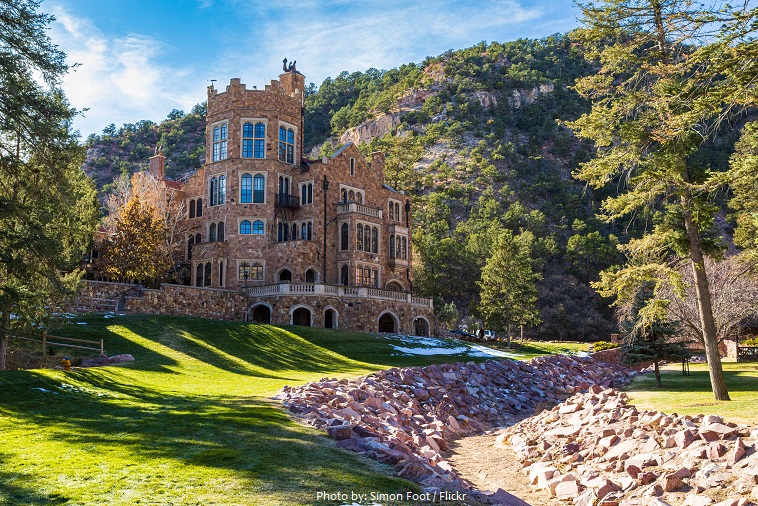 The Manitou Cliff Dwellings are a group of relocated Ancestral Puebloan cliff dwellings and museums located just west of Colorado Springs. The Anasazi Museum was established and the cliff dwellings were built starting in 1904, and were opened to the public in 1907. The museum features displays about the lives of the Ancestral Puebloans, including exhibits of archaeological artifacts, tools, pottery and weapons. Visitors can also walk through the ancient-style ruins outside. 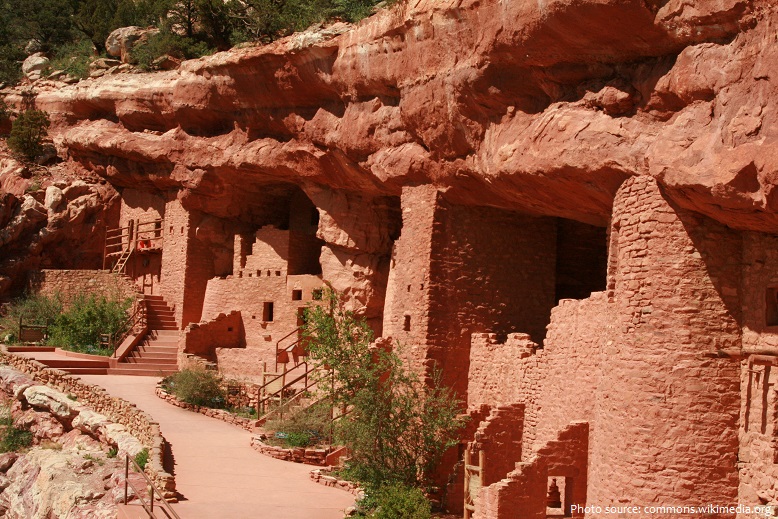 Colorado Springs has been the subject of or setting for many books, movies and television shows, and is a frequent backdrop for political thrillers and military-themed stories because of its many military installations and vital importance to the United States’ continental defense.