Chile is a South American country occupying a long, narrow strip of land between the Andes to the east and the Pacific Ocean to the west.

The official name is the Republic of Chile.

Chile is bordered by Peru to the north, Bolivia to the northeast and Argentina to the east.

The official language of Chile is Spanish.

Santiago, Chile’s capital and largest city, sits in a valley surrounded by the snow-capped Andes and the Chilean Coastal Range. Founded in 1541, Santiago has been the capital city of Chile since colonial times. 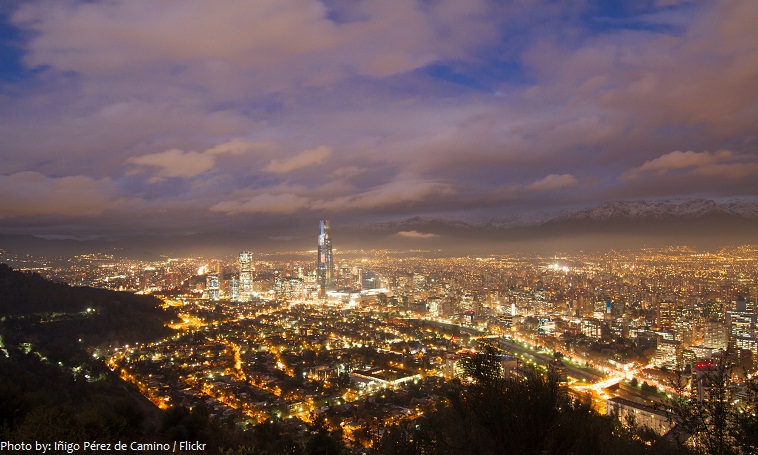 Chile’s territorial shape is among the world’s most unusual. From north to south, Chile extends 4,270 kilometers (2,653 miles), and yet it only averages 177 kilometers (110 miles) east to west.

The crater lake of Ojos del Salado in the Andes on the Chile-Argentina border is the world’s highest lake at 6,390 meters (20,960 feet). It is small lake about 100 meters (330 feet) in diameter.(on the left down corner of the photo, half frozen). 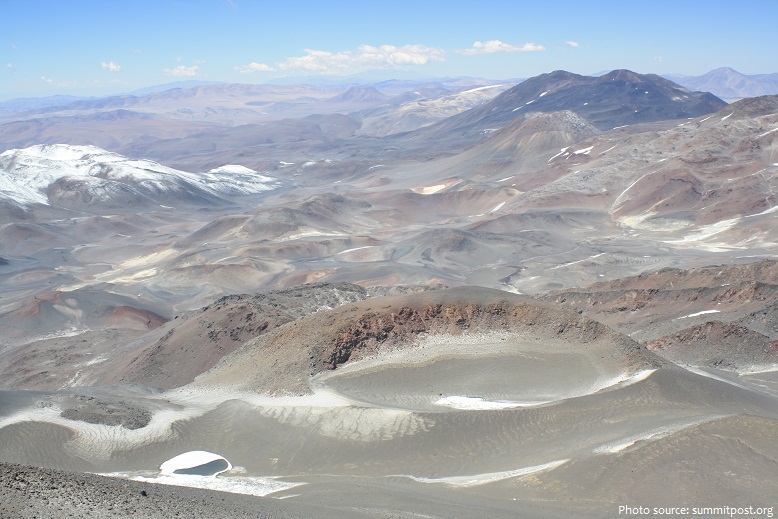 Torres del Paine National Park is one of the most spectacular national parks in the country and covers approximately 242,242 hectares (598,593 acres). It is one of the largest and most visited parks in Chile. 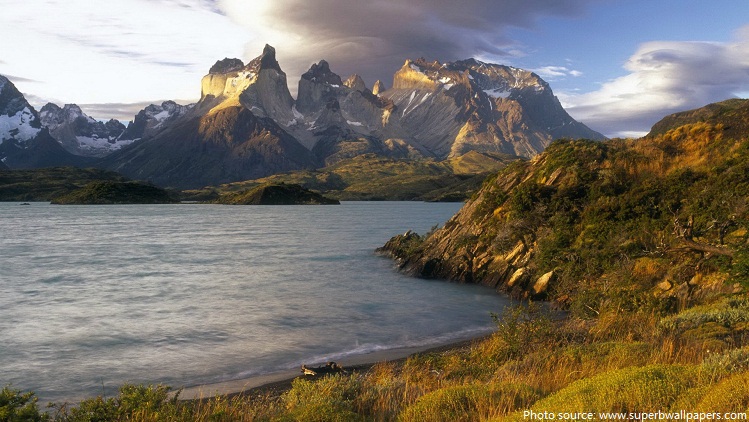 Rapa Nui National Park is a national park and UNESCO-inscribed World Heritage Site located on Easter Island, Chile.The island was taken over by Chile in 1888. Its fame and World Heritage status arise from the 887 extant stone statues known by the name “moai“, whose creation is attributed to the early Rapa Nui people. 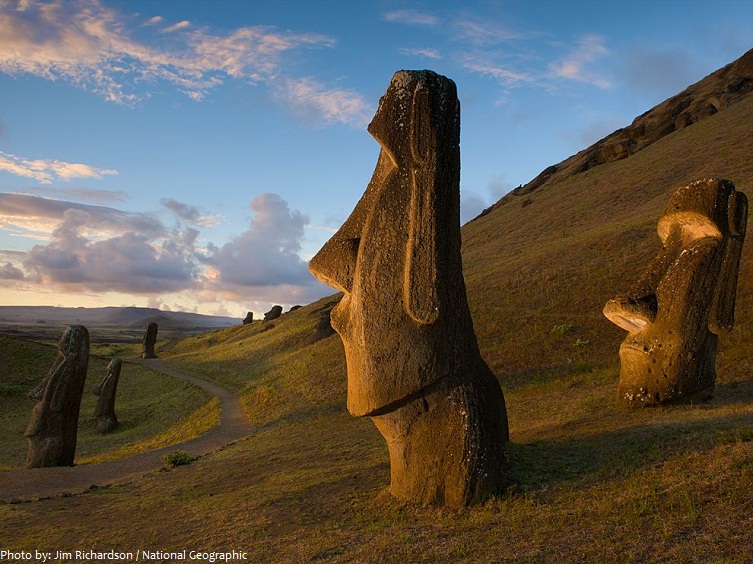 The Churches of Chiloé represent a unique example in Latin America of an outstanding form of ecclesiastical wooden architecture. They represent a tradition initiated by the Jesuit Peripatetic Mission in the 17th and 18th centuries, continued and enriched by the Franciscans during the 19th century and still prevailing today. The Churches of Chiloé were designated UNESCO World Heritage Sites since 2000.

Found in the north of Chile, the Atacama Desert is the driest place on Earth. Parts of the Atacama have not seen a drop of rain since record-keeping began.

The Atacama is also home to geoglyphs, or large drawings made from stones, arranged on the side of the mountains.The Atacama Giant is the largest prehistoric anthropomorphic figure in the world with a height of 119 meters (390 feet) and represents a deity for the local inhabitants from AD 1000 to 1400. 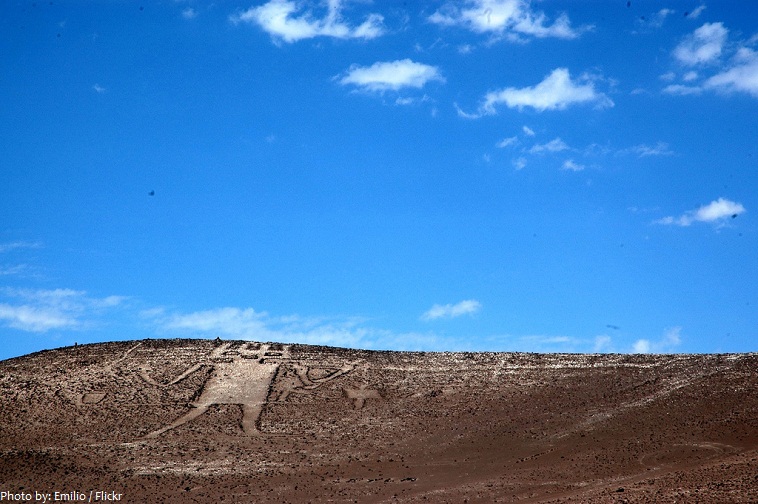 The alerce tree, found in southern Chile, is noted for its longevity. To date, the oldest known living specimen is 3,640 years old. 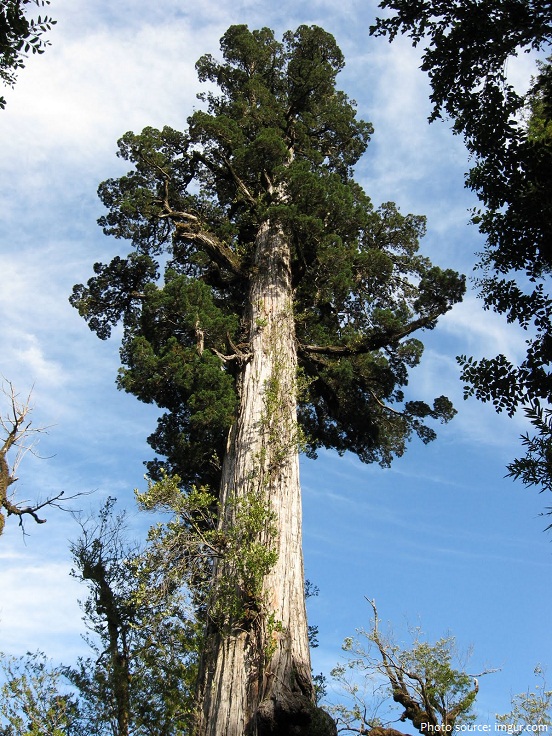 San Alfonso del Mar is a private resort in Algarrobo, Chile. The resort has the world’s second largest swimming pool. The pool is 1,013 meters (3,323 feet) long, covering 8 hectares (20 acres), containing some 250 million liters (66 million US gallons) of seawater, with a maximum depth of 3.5 meters (11.5 feet). 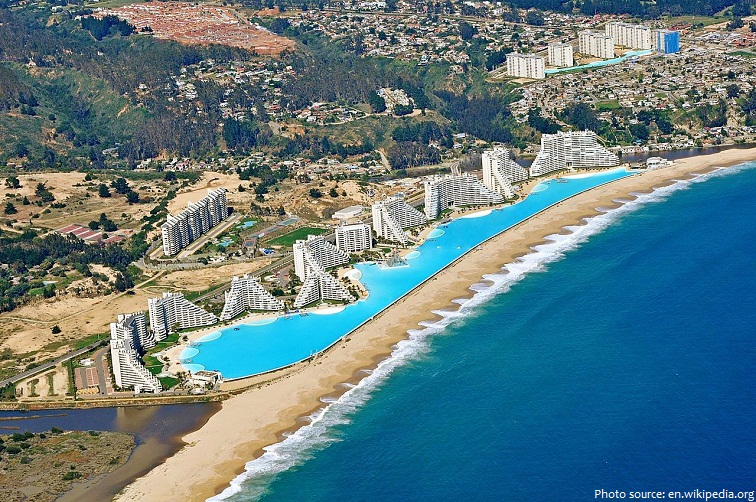 The atmosphere in the mountains in the Norte Grande part of Chile is excellent for astronomers because the air is particularly clear. It is the chosen spot for observatories in all the Southern Hemisphere, having 300 clear nights a year. The famous observatories of Tololo, La Silla [pic. below], and Las Campanas can be seen from the highway, as well from Cerro Grande in La Serena. 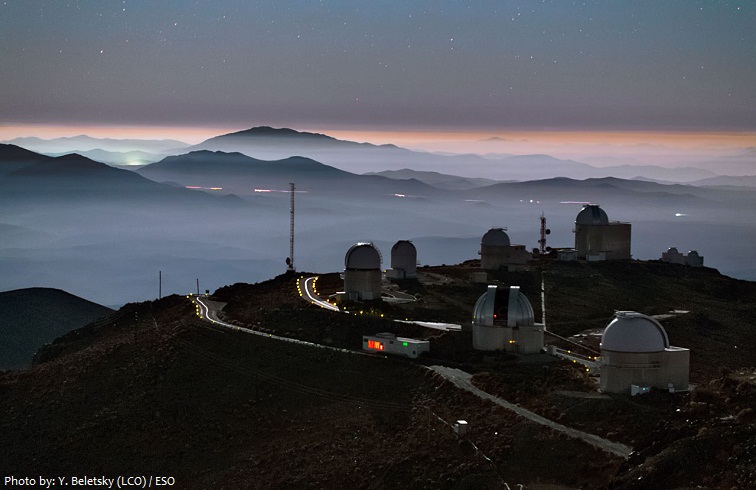 Chile has a long viticultural history for a New World wine region dating to the 16th century when the Spanish conquistadors brought Vitis vinifera vines with them as they colonized the region. Chile is now the fifth largest exporter of wines in the world, and the ninth largest producer.

Chile began to export salmon in 1984 and is now the world’s second largest exporter of salmon after Norway.

The most original Chilean dish is curanto, a feast of shellfish and meat that is eaten by the locals on the island of Chiloé. It is traditionally prepared in a hole which is dug in the ground. The bottom is covered with stones, heated in a bonfire until red. 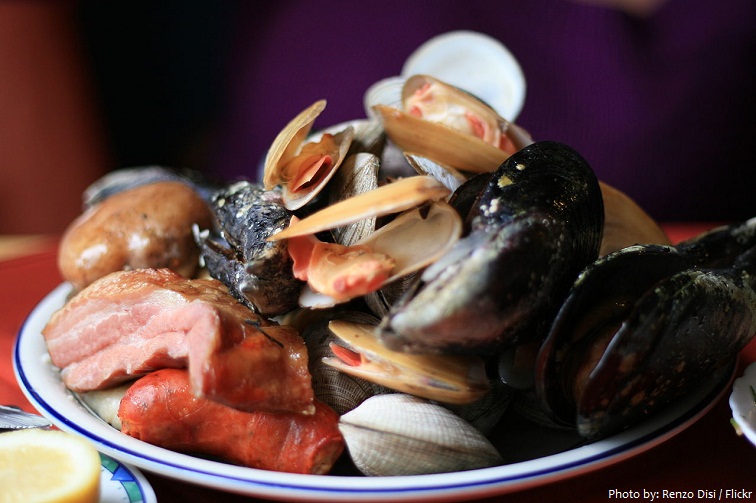 Chile and Peru both claim the pisco sour as their national drink, and each asserts ownership of the cocktail’s base liquor—pisco; commonly mixed with soft drinks like Coca-Cola (Piscola) or ginger ale or vermouth. But the most common version is the Pisco sour where it is blended with lemon juice, sugar, ice, and beaten egg whites. 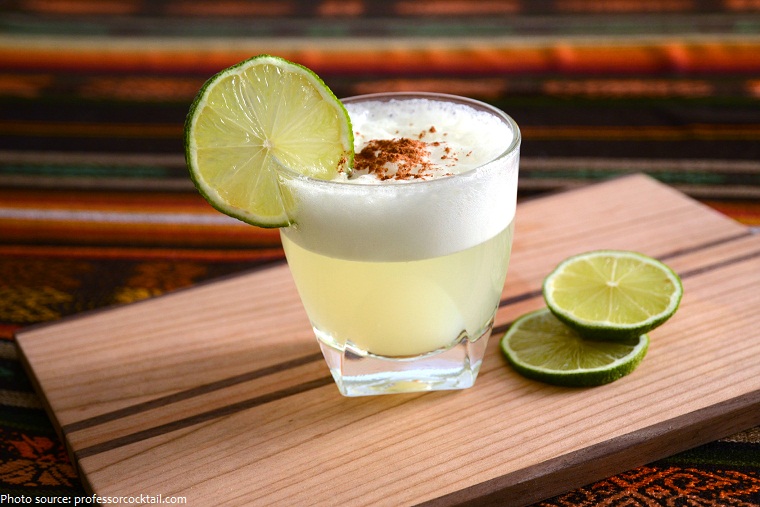 Chile is one of the few countries on Earth that has a government-supported UFO research organization.

Chilean husbands and wives have different last names because women keep their maiden names. If they have the same last names, they are often considered brother and sister.

Divorce in Chile was legalized only in 2005, and the country has one of the lowest divorce rates globally.

Scottish sailor Alexander Selkirk was marooned for about four years on Chile’s Islas Juan Fernández, located 587 kilometers (364 miles) west of Valparaiso. After being rescued, he published his story of survival and was said to be the inspiration for Daniel Defoe’s classic novel Robinson Crusoe.

Chileans call their country: país de poetas (country of poets), for good reason too, the country’s two Nobel Prize winners both won in Literature. Gabriela Mistral in 1945, and the country’s most famous poet, Pablo Neruda in 1971.

There are various theories about the origin of the word Chile. According to one theory the Incas of Peru, who had failed to conquer the Araucanians, called the valley of the Aconcagua “Chili” by corruption of the name of a tribal chief (“cacique”) called Tili, who ruled the area at the time of the Incan conquest. Another theory points to the similarity of the valley of the Aconcagua with that of the Casma Valley in Peru, where there was a town and valley named Chili. Other theories say Chile may derive its name from the indigenous Mapuche word chilli, which may mean “where the land ends” or “the deepest point of the Earth,” or from the Aymara tchili meaning “snow“; another meaning attributed to chilli is the onomatopoeic cheele-cheele—the Mapuche imitation of a bird call. 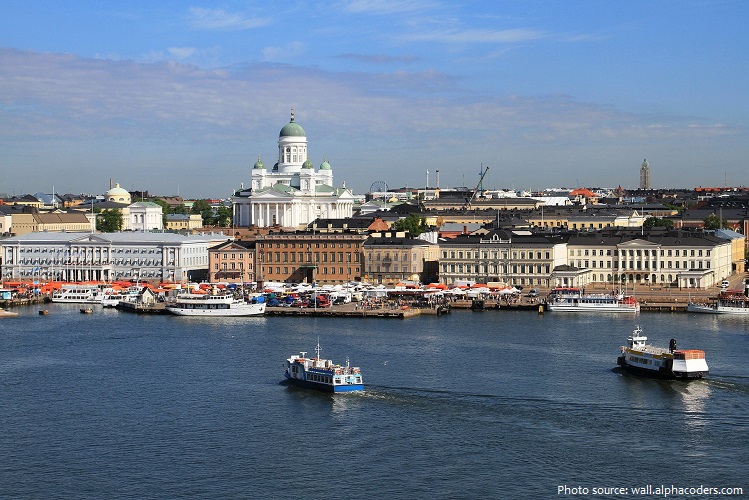 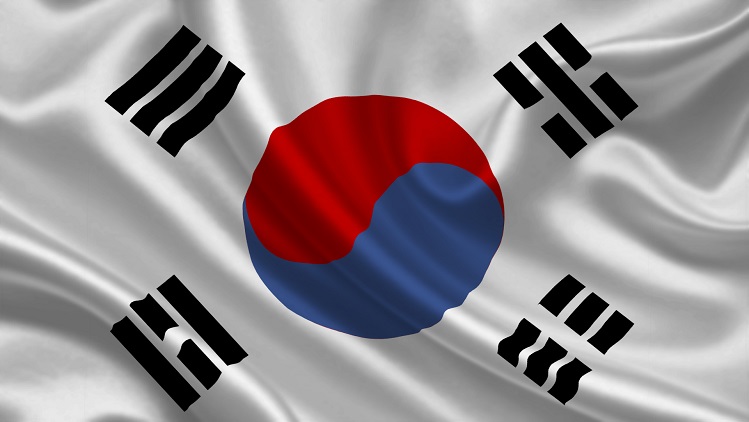 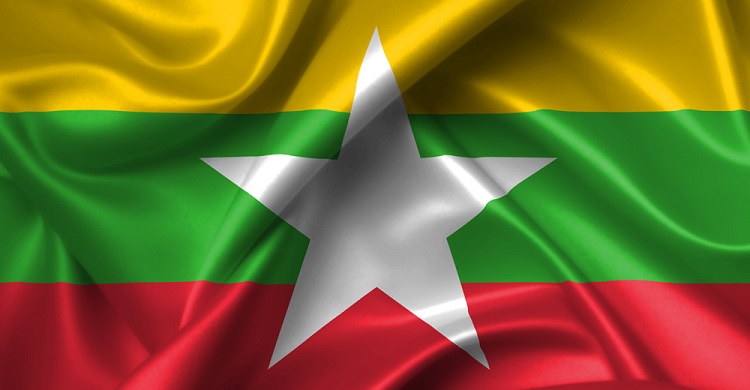 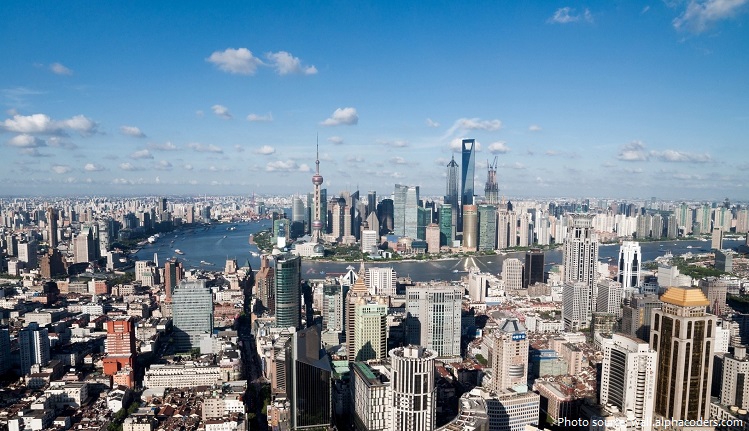