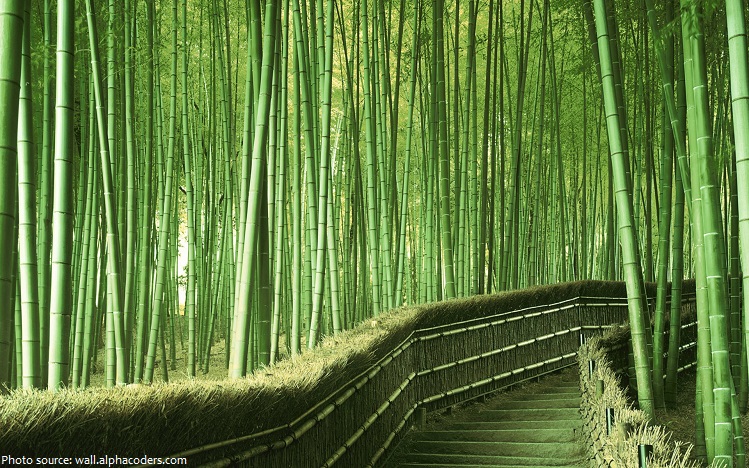 Bamboo is a flowering perennial evergreen plant which belongs to the grass family (Poaceae).

There are about 1500 species of bamboo.

Bamboo occurring naturally in every continent except Europe and Antarctica.

The heaviest concentration and largest number of species is in East and Southeast Asia and on islands of the Indian and Pacific oceans.

Most bamboo species are native to warm and moist tropical and warm temperate climates. However, many species are found in diverse climates, ranging from hot tropical regions to cool mountainous regions and highland cloud forests.

The woody ringed stems, known as culms, are typically hollow between the rings (nodes). 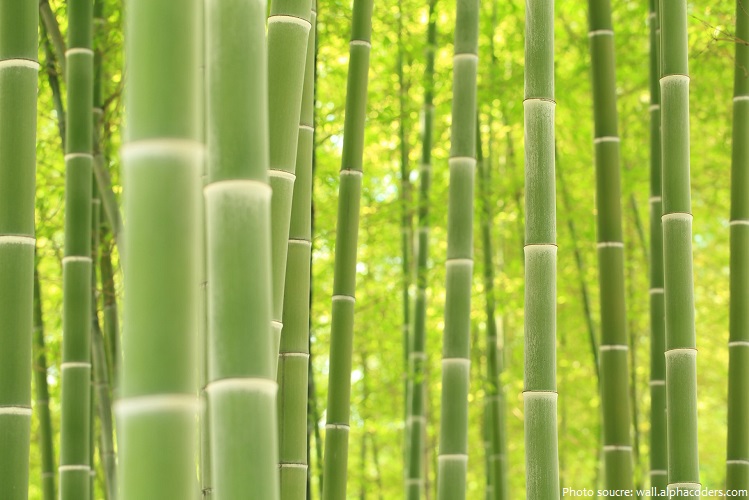 Although bamboo is a grass, many of the larger bamboos are very tree-like in appearance and they are sometimes called “bamboo trees”. 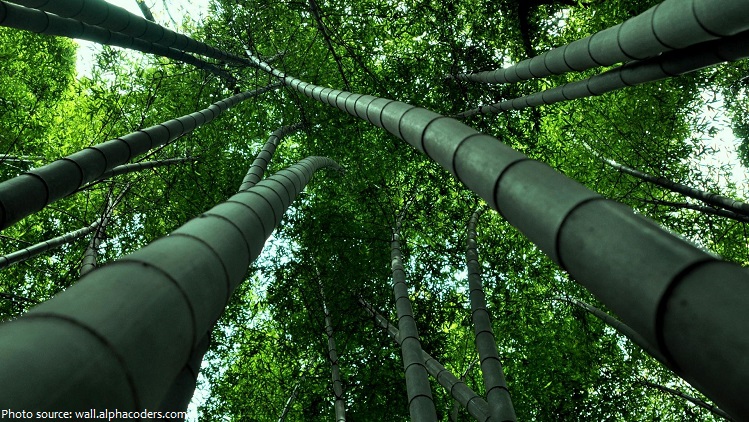 The giant bamboo (Dendrocalamus giganteus) of tropical south-east Asia is the tallest species. It­ can reach as high as 50 m (164 ft).

However, the size range for mature bamboo is species-dependent, with the smallest bamboos reaching only several centimeters high at maturity.

A typical height range that would cover many of the common bamboos grown in the United States is 4.6–12 m (15–39 ft), depending on species. 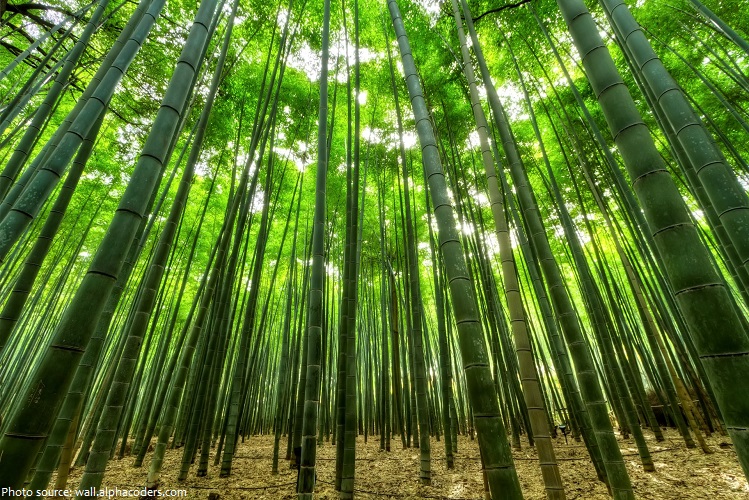 Bamboos include some of the fastest-growing plants in the world. Certain species of bamboo can grow 91 cm (3 ft) within a 24-hour period, at a rate of almost 4 cm (1.5 in) an hour (a growth around 1 mm every 90 seconds, or one inch every 40 minutes).

Bamboos have a life-cycle of 3 to 130 years, varying among species. Normally, new bamboos grow up from bamboo shoots at the roots. At infrequent intervals for most species, they will start to blossom. Most bamboos species flowers once every 60 to 120 years. After blossom, flowers produce fruit (called “bamboo rice” in parts of India and China). Following this, the bamboo forest dies out. Since a bamboo forest usually grows from a single bamboo, the death of bamboos occurs in a large area. [Photo below: Flowering bamboo] 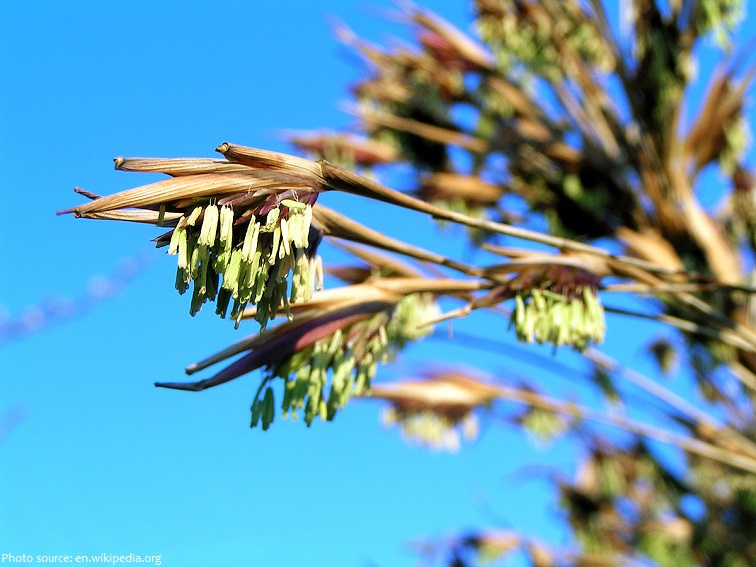 In China, Myanmar and India, “bamboo blossom” was traditionally seen as a curse or an indication of a starvation coming.

Bamboo Forest is a tourist site in Arashiyama, Kyoto, Japan. On CNN, it was referred to as One of the most beautiful groves on Earth. The Ministry of the Environment included the Sagano Bamboo Forest on its list of “100 Soundscapes of Japan.” Bamboos are used for a great variety of purposes, especially in East and Southeast Asia.

Bamboo has a long history of use in Asian furniture. Chinese bamboo furniture is a distinct style based on a millennia-long tradition, and bamboo is also used for floors due to its high hardness.

The sap of young stalks tapped during the rainy season may be fermented to make ulanzi (a sweet wine) or simply made into a soft drink.

Bamboo can be utilized as a building material as for scaffolding, bridges and houses. Bamboo, like true wood, is a natural composite material with a high strength-to-weight ratio useful for structures. Bamboo has a higher compressive strength than wood, brick or concrete and a tensile strength that rivals steel. Bamboo has often been used to construct weapons and is still incorporated in several Asian martial arts.

Bamboo’s natural hollow form makes it an obvious choice for many musical instruments, most commonly flutes.

The natural antibacterial properties of bamboo fibers make bamboo a great material for use in clothing. Bamboo and cotton were tested for how much bacteria they killed over a 24-hour period, and the bamboo killed nearly all of the bacteria, while the cotton did not kill any.

Bamboo’s long life makes it a Chinese symbol of uprightness and an Indian symbol of friendship. Bamboo is also a symbol of longevity because of its durability, strength, flexibility, and resilience.

In Chinese culture, the bamboo, plum blossom, orchid, and chrysanthemum are collectively referred to as the Four Gentlemen; these four plants also represent the four seasons.

Several Asian cultures, including that of the Andaman Islands, believe humanity emerged from a bamboo stem.

In Philippine mythology, one of the more famous creation accounts tells of the first man, Malakás (“Strong”), and the first woman, Maganda (“Beautiful”), each emerged from one half of a split bamboo stem on an island formed after the battle between Sky and Ocean.

Bamboo evolved only 30 to 40 million years ago, after the demise of the dinosaurs.

Soft bamboo shoots, stems, and leaves are the major food source of the giant panda of China, the red panda of Nepal, and the bamboo lemurs of Madagascar.

Bamboo produces more than 35% more oxygen than trees giving the plant a potentially crucial role in stabilising our planet’s atmosphere.

After the Hiroshima bomb in 1945, bamboo survived the atomic blast closer to ground zero better than any other flora or fauna.