The wood thrush is a North American songbird.

It is widely distributed across North America, wintering in Central America and southern Mexico.

The wood thrush’s living and breeding range extends from Manitoba, Ontario and Nova Scotia in southern Canada to northern Florida and from the Atlantic coast to the Missouri River and the eastern Great Plains.

It migrates to southern Mexico through to Panama in Central America in the winter, mostly in the lowlands along the Atlantic and Pacific coasts. 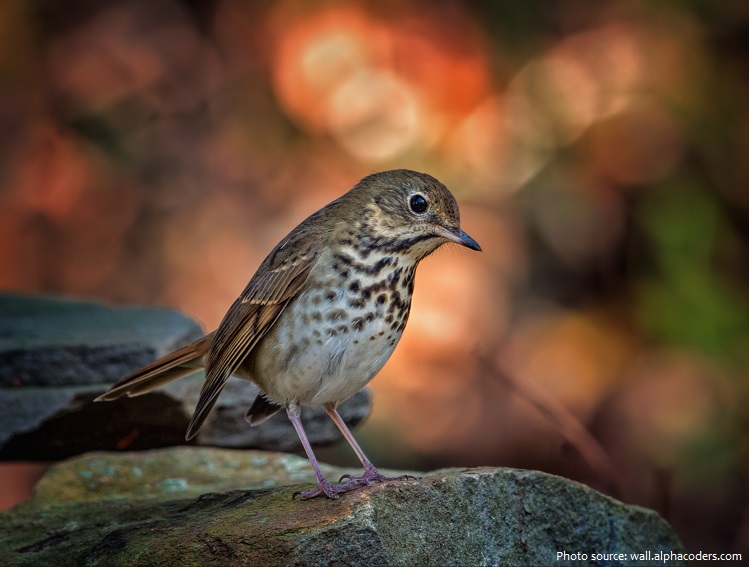 The wood thrush’s habitat is composed mostly of deciduous and mixed forests.

They begin leaving their breeding grounds for the fall migration around mid-August. Wood thrushes migrate at night.

The average distance that wood thrushes migrate is 2,200 kilometers (1,370 miles).

The longest known lifespan for a wood thrush in the wild is 10 years, 2 months. 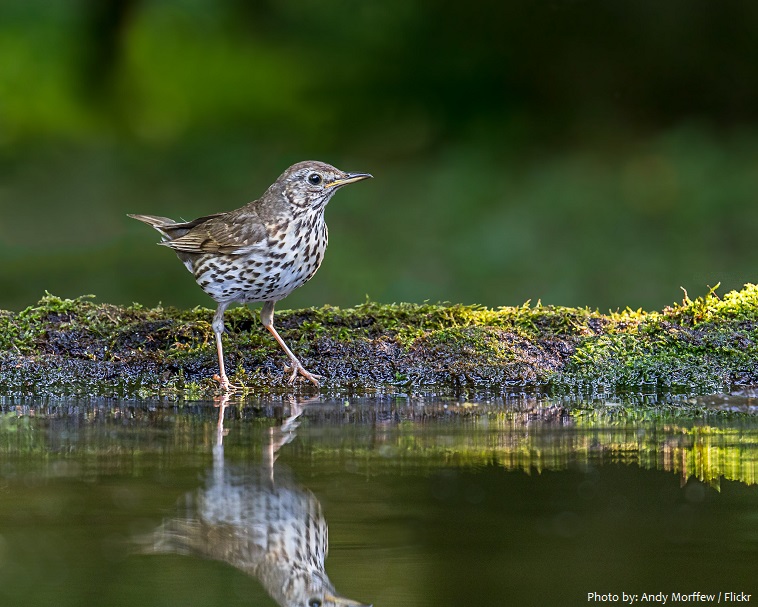 Coloration: The crown, nape, and upper back are cinnamon-brown, while the back wings, and tail are a slightly duller brown. The breast and belly are white with large dark brown spots on the breast, sides, and flanks. It has white eye rings and pink legs.

Male and female wood thrushes are similar in size and plumage. Juveniles look similar to adults, but have additional spots on their back, neck and wing coverts. 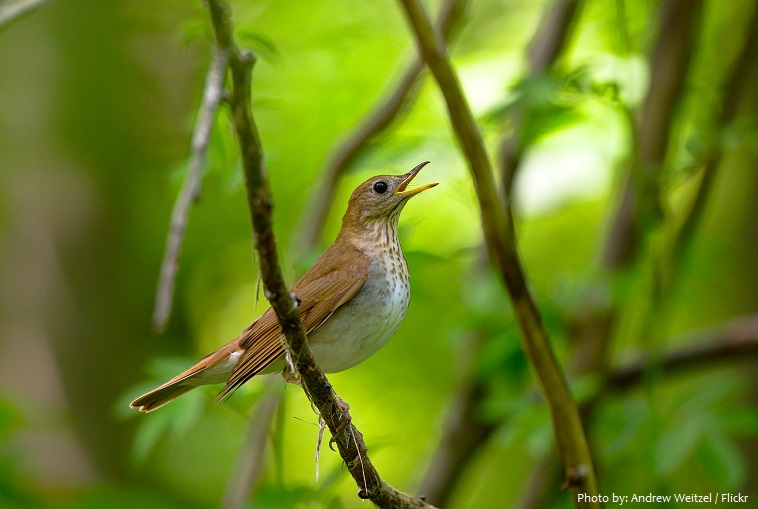 The wood thrush is an omnivore. Soil invertebrates and larvae make up most of the wood thrush’s diet, but it will also eat fruits in the late summer, fall, and late winter. It occasionally feeds on arboreal insects, snails, and small salamanders.

Wood thrushes feed mostly on the forest floor. They can be seen hopping around in leaf litter and on the ground under the forest canopy, gleaning insects and probing the soil with their bills. They use their bill to turn over leaves in search of prey. 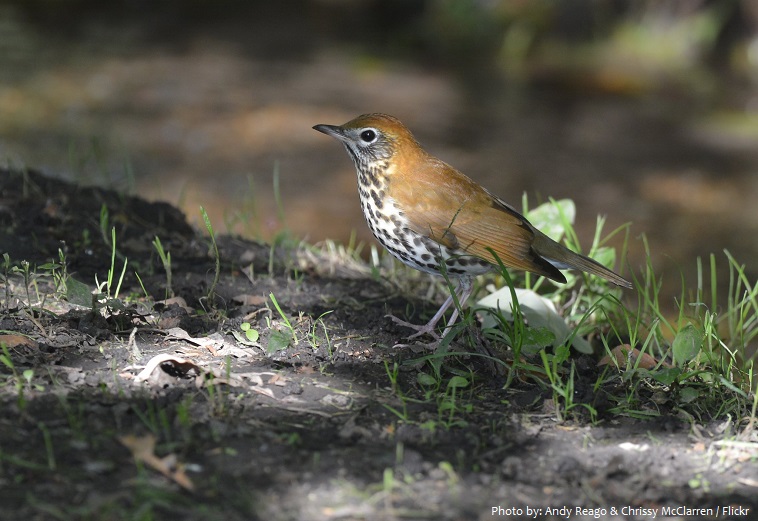 This species has been observed displaying a behavior known as “anting.” Anting occurs when a bird picks up a single ant or group of ants and rubs them on its feathers. The purpose of this behavior is unknown, but it is thought that the birds may be able to acquire defensive secretions from the ants possibly used for some medicinal purposes, or that it simply supplements the birds’ own preen oil.

The wood thrush is primarily solitary, but occasionally forms mixed-species flocks in the winter.

Wood thrushes communicate using song and physical displays. The song of the male is often cited as being the most beautiful in North America. 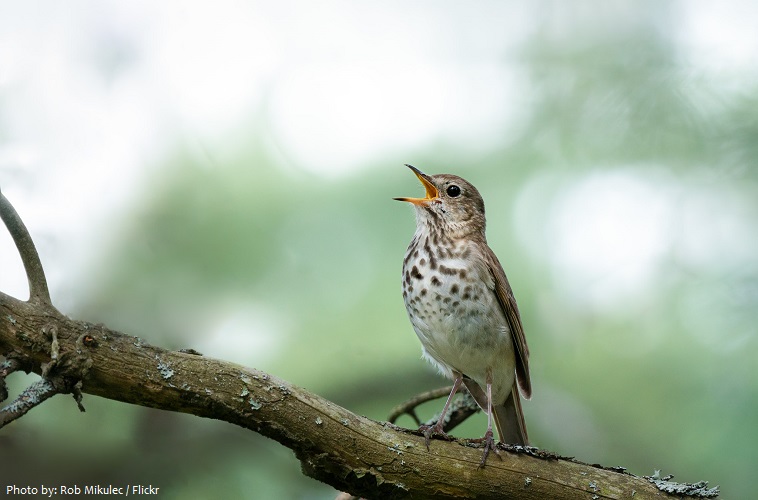 Wood thrushes are monogamous. Breeding pairs form in mid-April and early-May, and usually last for the duration of the breeding season.

The female usually chooses the nest site and builds the nest. Two to four pale blue eggs are laid at the rate of one per day. The eggs are incubated by the female only for 11 to 14 days. The female broods the chicks during the first four days after hatching. Both parents feed the nestlings and remove fecal sacs from the nest. The chicks fledge 12–15 days after hatching, but the parents continue to feed them until they become independent and leave the parents’ territory at 21–31 days old. 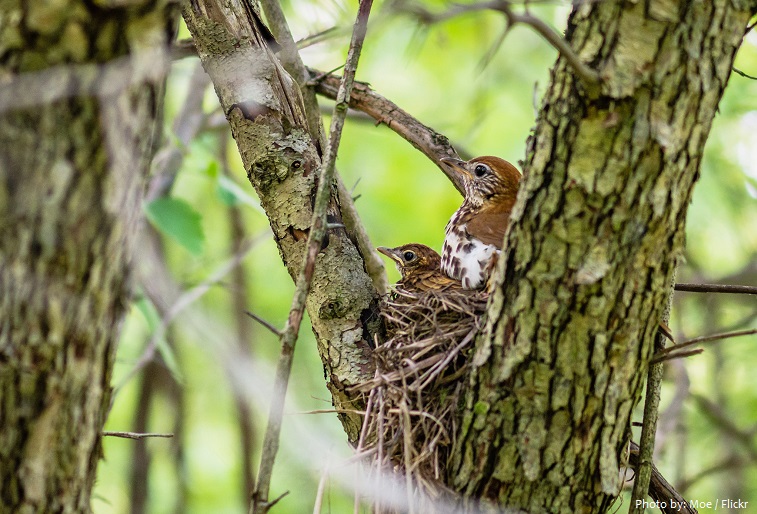 Wood thrushes are becoming less common. This is probably because the forests that they breed in are being cut down, or divided up into smaller patches. Wood thrushes prefer large patches of forest over small patches. They are able to raise more chicks is large forests because predators are less common. 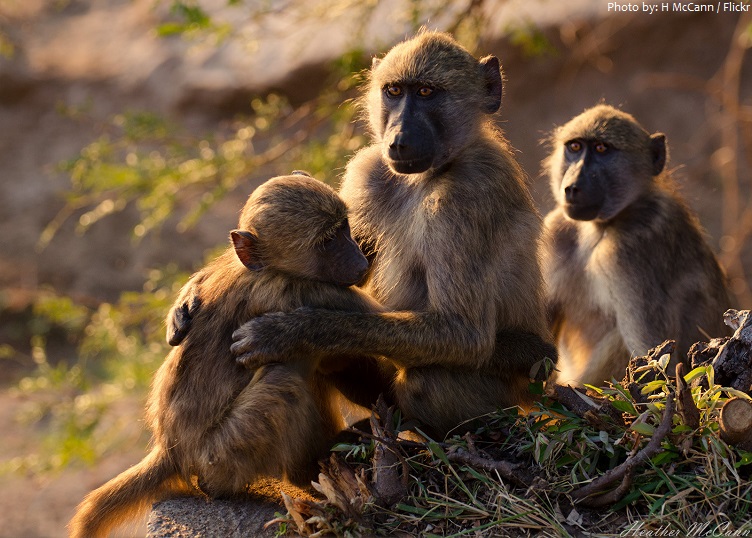 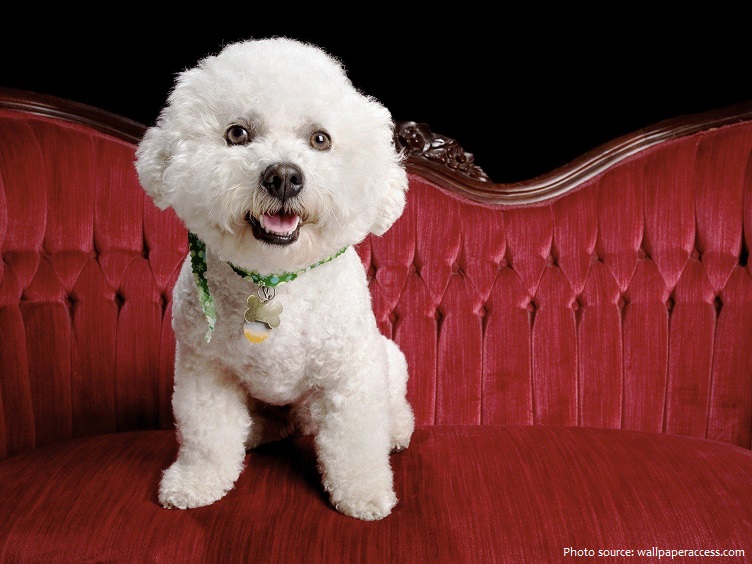