There are around 393 different parrot species including macaws, parakeets, lorikeets keas, lovebirds, cockatiels and cockatoos.

Parrots are found on all tropical and subtropical continents and regions including South and Central America, Asia, Africa, Australia and Oceania.

The greatest diversity of parrots is in South America and Australasia.

They have a lifespan between 10 and 95 years, depending on species.

Because the parrot order includes so many different species, parrot sizes vary widely.

The world’s largest parrot is the hyacinth macaw [photo below], found in South America, at about 1 meter (40 inches) long. But it’s not the heaviest bird in the parrot family – that honor belongs to the kakapo of New Zealand, which can weigh up to 3 kilograms (6.6 pounds), too heavy for its size to fly. The smallest is the buff-faced pygmy parrot, at under 10 grams (0.4 oz) in weight and 8 cm (3.1 in) in length. 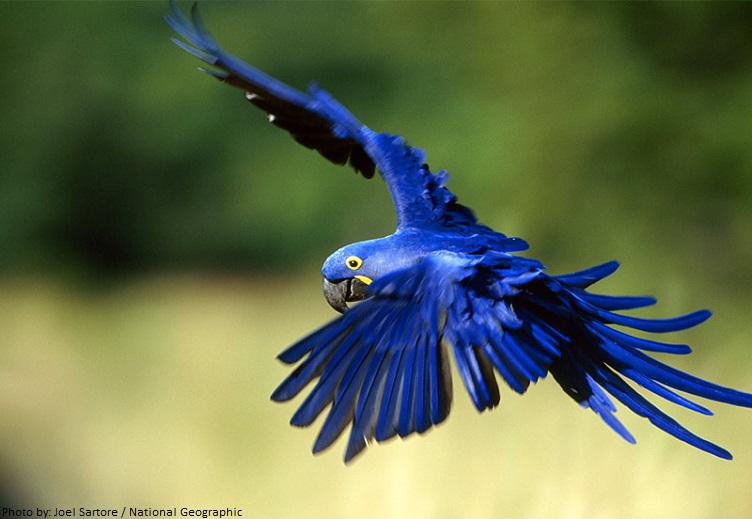 Parrots come in a variety of bright colors, mostly made up of greens, reds, blues, and yellows. There are exceptions, though including species with black, gray and brown plumage.

A parrot’s brilliant plumage has a special defense against damage: Psittacofulvins, a bacteria-resistant pigment that only parrots are known to produce, give the birds’ feathers their red, yellow and green coloration. 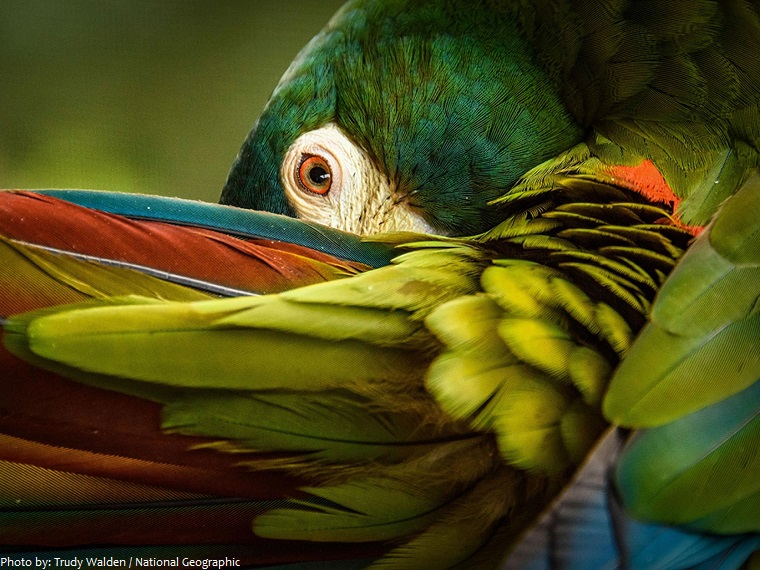 In most parrots species males and females look virtually identical.

Parrots are social birds that often gather in flocks of 10 to 30 individuals. 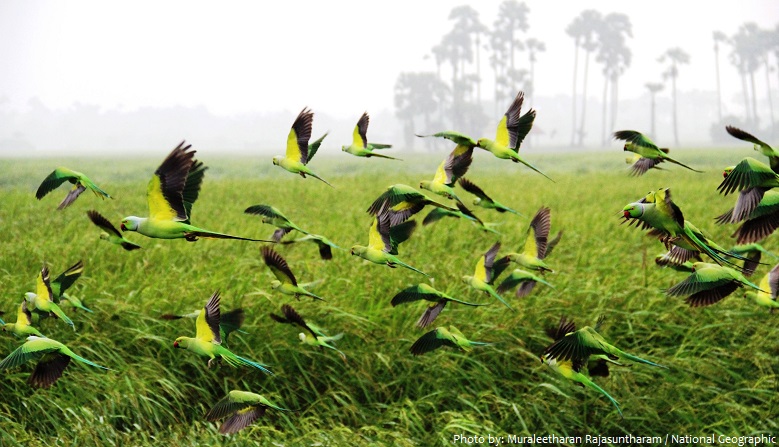 Living in a flock helps parrots watch out for predatory birds, but it’s also fun to have someone else to talk to! Parrots are known for being very vocal: squawks, screams, and screeches can be heard from faraway in the forests. These calls are used to keep track of each other.

Whether a parrot is nocturnal or diurnal is dependent on the particular species. However, most parrots are classified as being diurnal.

Parrots are omnivores, which means that they can eat both meat and vegetation. Their diet consists of seeds, fruit, nectar, pollen, buds, and sometimes arthropods and other animal prey. Seeds are their favorite food; they have strong jaws to help the bird crack open hard nuts and seeds. 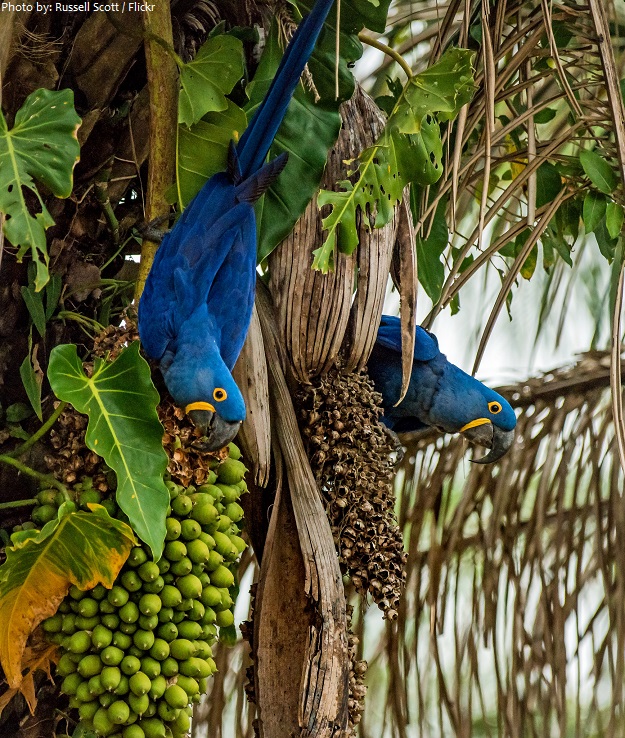 Parrots are the only birds that can lift food to their beaks using their feet. They tend to favor using one foot more than the other, just like people are right- or left-handed.

Parrots’ beaks grow continuously and are worn by eating, chewing wood or grinding the top and bottom parts together.

With few exceptions, parrots are monogamous and spend their lives with only one mate. The pair bonds are strong and a pair remains close during the nonbreeding season, even if they join larger flocks. 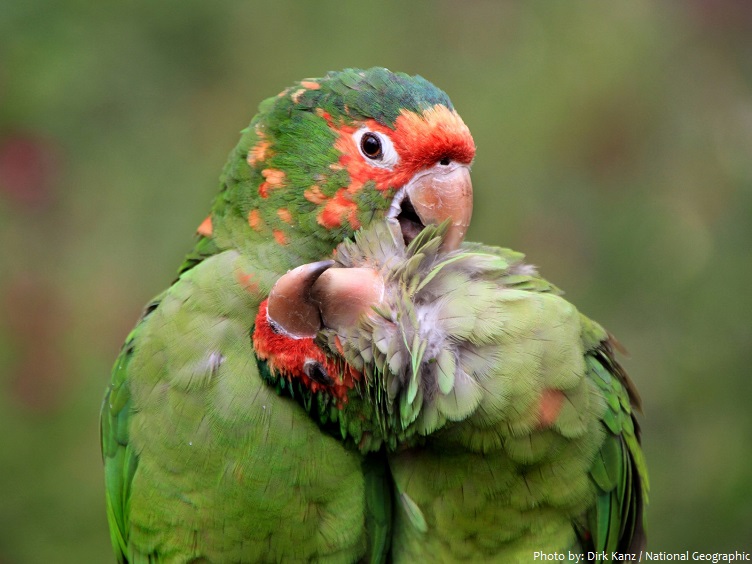 Parrots nest in cavities and hold no territories other than their nesting sites.

Parrots typically lay two to eight white eggs at one time. In most species, the female undertakes all the incubation. Incubation varies from 17 to 35 days, with larger species having longer incubation periods.

Chicks are almost completely naked when they hatch, except for a thin layer of down feathers on the back. Their eyes are closed until they are about two weeks old, and at three weeks, the chicks’ adult feathers start to appear. These feathers are so thin and pointy that they are called pinfeathers. The mother is the one that stays with the babies while the father goes off to get food for the family for the next month or so, until the chicks fly off on their own. 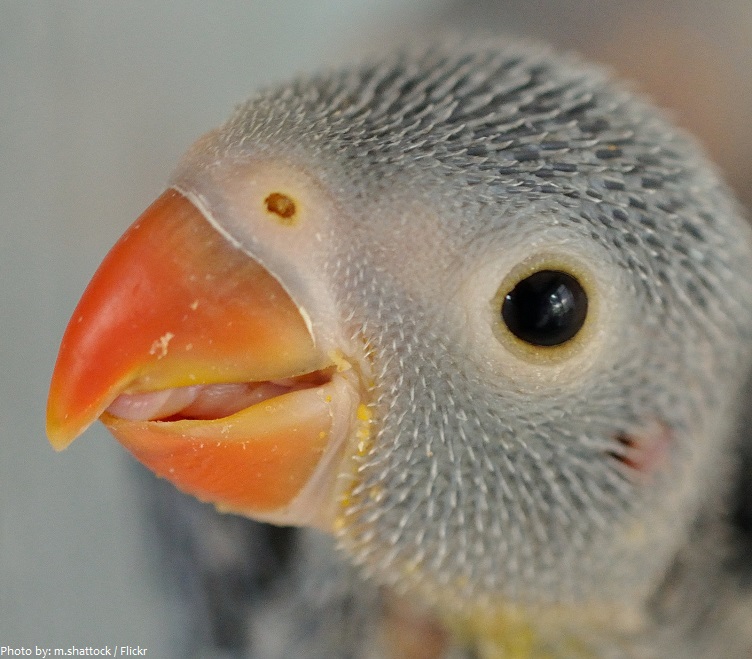 The main predators, or natural enemies, of parrots are birds of prey, such as hawks, owls and eagles, and large snakes such as pythons and boa constrictors. Monkeys also eat parrot eggs and baby parrots whenever they can find them.

Many parrot species are in decline and several are extinct. Of the 393 or so living species, 130 are listed as near threatened or worse by the International Union for Conservation of Nature (IUCN), and 16 of which are currently considered critically endangered.

The main threats they face are habitat loss, hunting, and capture for the pet trade.

Parrots are popular pets because they are intelligent, charismatic, colorful, musical and some species have the ability to “talk”. 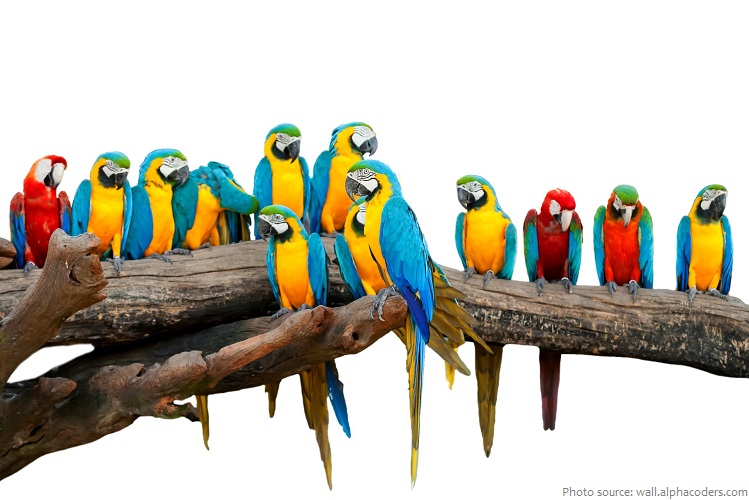 They have a long history as pets, stretching back thousands of years, and were often kept as a symbol of royalty or wealth.

African grey parrots of all subspecies are known for their superior ability to imitate sounds and human speech. Some African gray parrots can “speak” over 700 words.

An african grey parrot named Alex could count and knows colors and shapes.

Along with crows, ravens, and jays (family Corvidae), parrots are considered the most intelligent of birds.

Parrots have featured in human writings, story, art, humor, religion, and music for thousands of years.

In ancient times and current, parrot feathers have been used in ceremonies and for decoration. 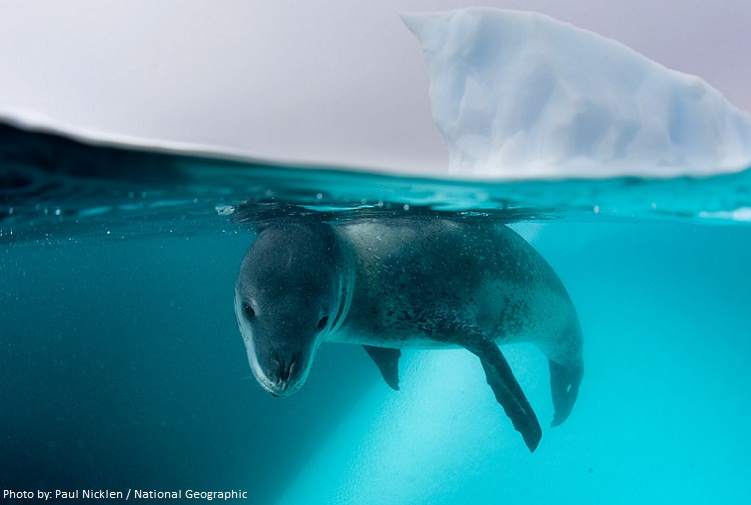