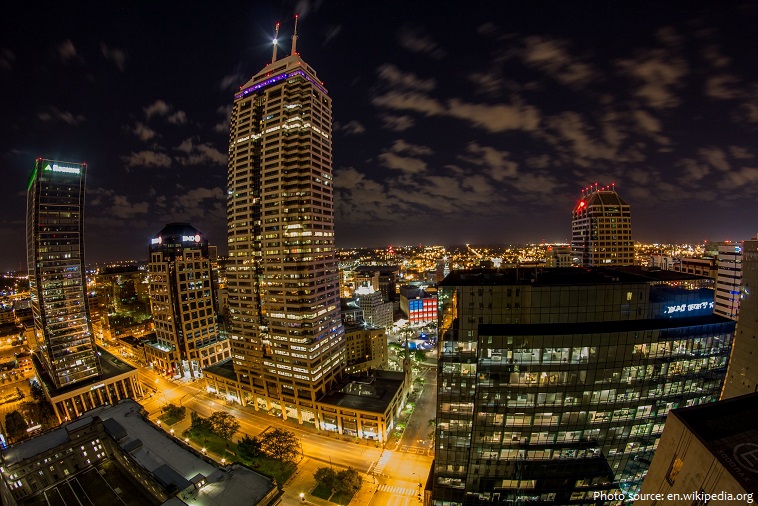 Indianapolis is the capital and largest city in Indiana.

The city is located in the East North Central region of the Midwestern United States, in central Indiana.

As of August 2019, the population of Indianapolis is about 870,000 people. It is the 17th most populous city in the United States. 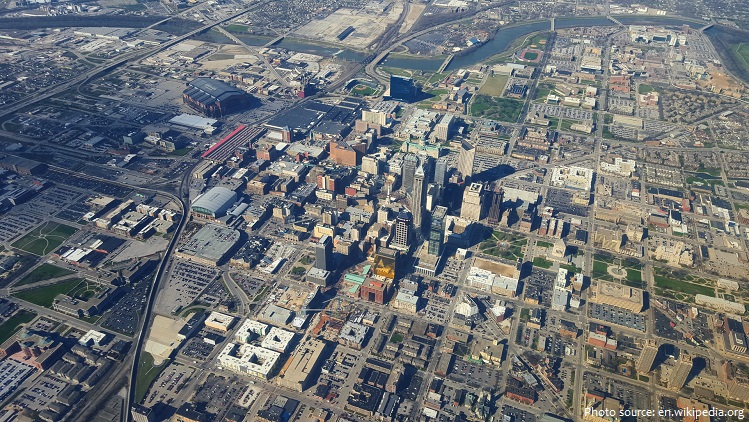 The city is built on a level plain surrounded by low, gently sloping hills.

The name Indianapolis is derived from the state’s name, Indiana (meaning “Land of the Indians”, or simply “Indian Land”), and polis, the Greek word for city. 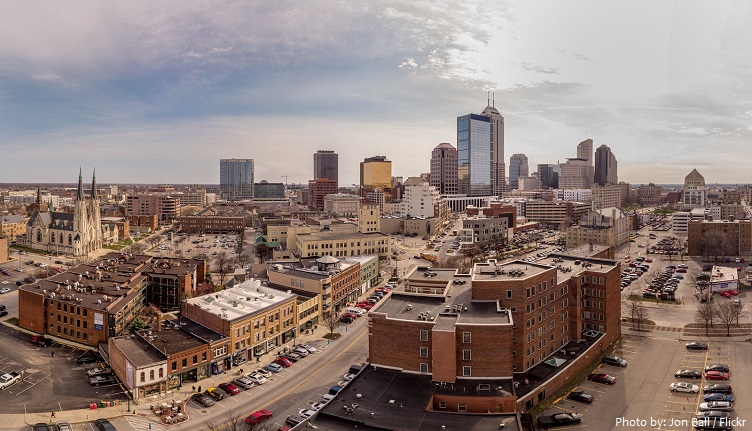 Before the area was settled, it had been the site of a Delaware Indian village and its surrounding hunting grounds.

In 1818, the Delaware relinquished their tribal lands in the Treaty of St. Mary’s.

In 1821, Indianapolis was founded as a planned city for the new seat of Indiana’s state government. The city was platted by Alexander Ralston and Elias Pym Fordham on a 2.6-square-kilometer (1-square-mile) grid next to the White River.

Some impetus for growth was given when the Cumberland (National) Road (modern Washington Street downtown) was routed across the city in 1827 and later when railroads arrived.

Indianapolis had become a major rail center by the start of the American Civil War in 1861, and its importance to Union logistics spurred further growth.

Following the Civil War—and in the wake of the Second Industrial Revolution—Indianapolis experienced tremendous growth and prosperity.

The population of Indianapolis surpassed 100,000 in 1890 and continued to grow rapidly in the 20th century. 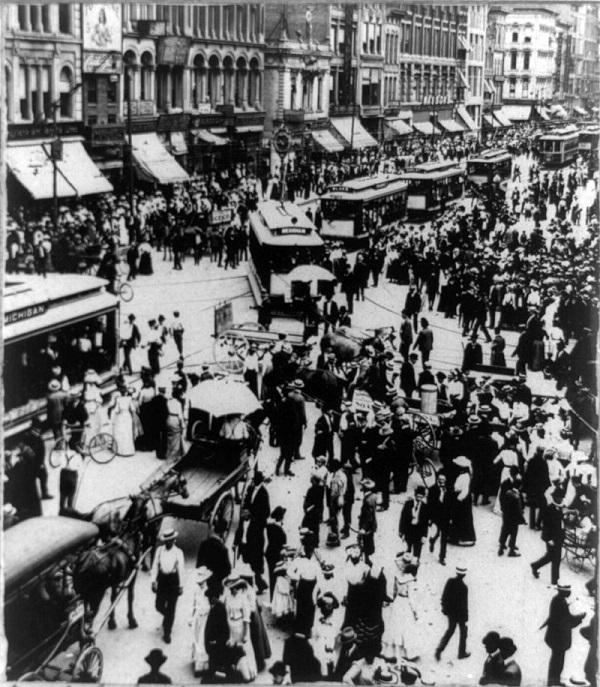 The city’s population approached a half million in 1960.

Today, Indianapolis is one of the most populous cities in the world not located on navigable water, although it is a hub of road, rail, and air transportation.

The Indianapolis Motor Speedway (nicknamed The Brickyard) is an automobile racing circuit located in Speedway, Indiana. It is the home of the Indianapolis 500 and the Brickyard 400, and formerly the home of the United States Grand Prix. Constructed in 1909, it is the second purpose-built, banked oval racing circuit after Brooklands and the first to be called a ‘speedway’. It has a permanent seating capacity of 257,325. It is the highest-capacity sports venue in the world. 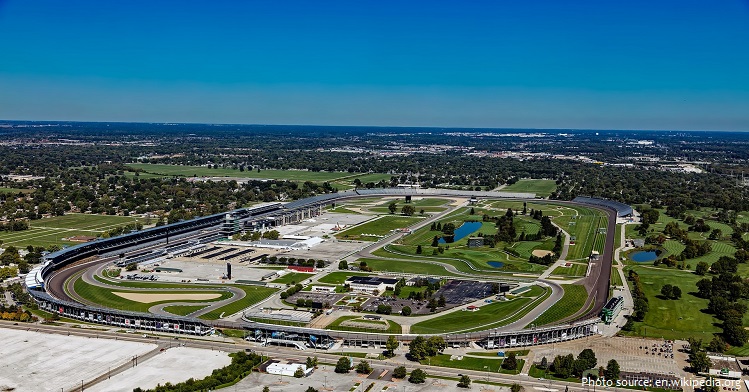 The Indiana State Soldiers and Sailors Monument is a 86.72 m (284 ft 6 in) neoclassical monument built on Monument Circle, a circular, brick-paved street that intersects Meridian and Market streets in the center of downtown Indianapolis. In the years since its public dedication on May 15, 1902, the monument has become an iconic symbol of Indianapolis. 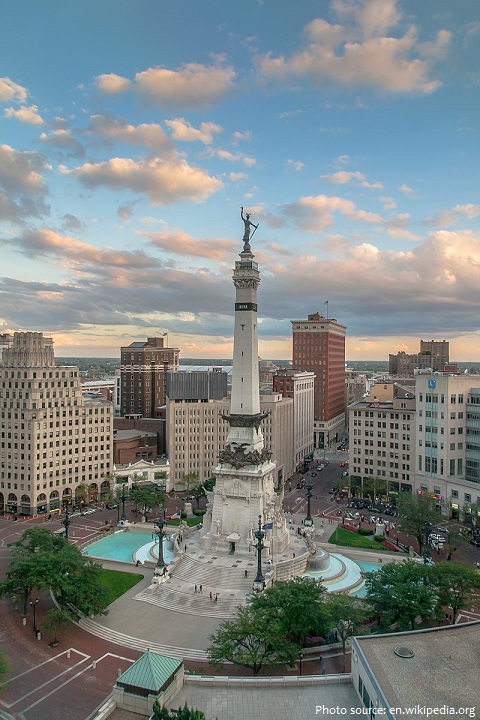 The Indianapolis Museum of Art (IMA) is an encyclopedic art museum located at Newfields. It is the 9th oldest and 8th largest encyclopedic art museum in the United States. The permanent collection comprises over 54,000 works, including African, American, Asian, and European pieces. Significant areas of the collection include: Neo-Impressionist paintings; Japanese paintings of the Edo period; Chinese ceramics and bronzes; paintings, sculptures, and prints by Paul Gauguin and the Pont-Aven School; a large number of works by J. M. W. Turner; and a growing contemporary art collection. 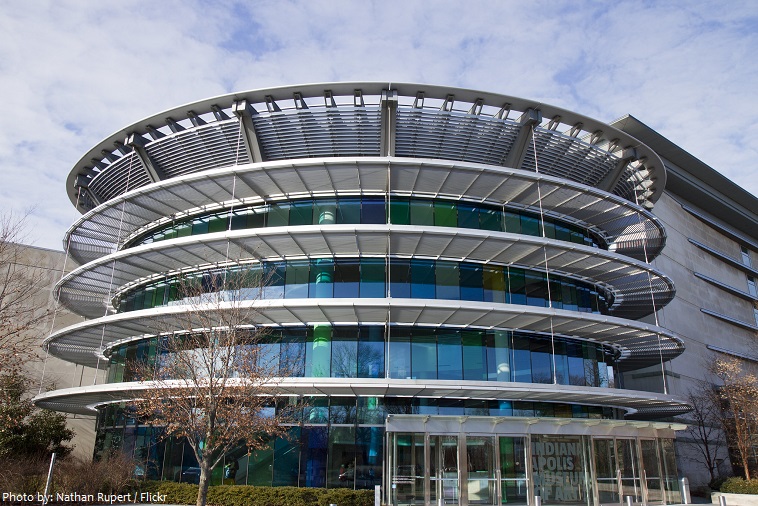 The Children’s Museum of Indianapolis is the world’s largest children’s museum. The museum is accredited by the American Alliance of Museums. It is 44,000 square meters (472,900 square feet) with five floors of exhibit halls and receives more than one million visitors annually. Its collection of over 120,000 artifacts and exhibit items is divided into three domains: the American Collection, the Cultural World Collection, and the Natural World Collection. Among the exhibits are a simulated Cretaceous dinosaur habitat, a carousel, and a steam locomotive. 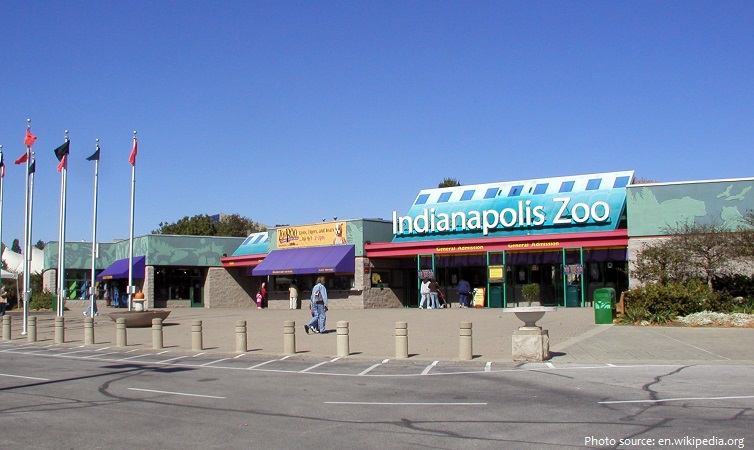 Compared with similar-sized American cities, Indianapolis is unique in that it contains some 200 farms covering thousands of acres of agricultural land within its municipal boundaries.

The Indiana State Fair has been held annually in Indianapolis since 1852.

Indianapolis has an emerging food scene as well as established eateries. Founded in 1821 as the city’s public market, the Indianapolis City Market has served the community from its current building since 1886.

Opened in 1902, St. Elmo Steak House is well known for its signature shrimp cocktail, named by the Travel Channel as the “world’s spiciest food.”