The warthog is a tough, sturdy animal.

It is a member of the pig family.

There are two species:
• the desert warthog
• the common warthog

The warthog has an average lifespan of 12 to 18 years. 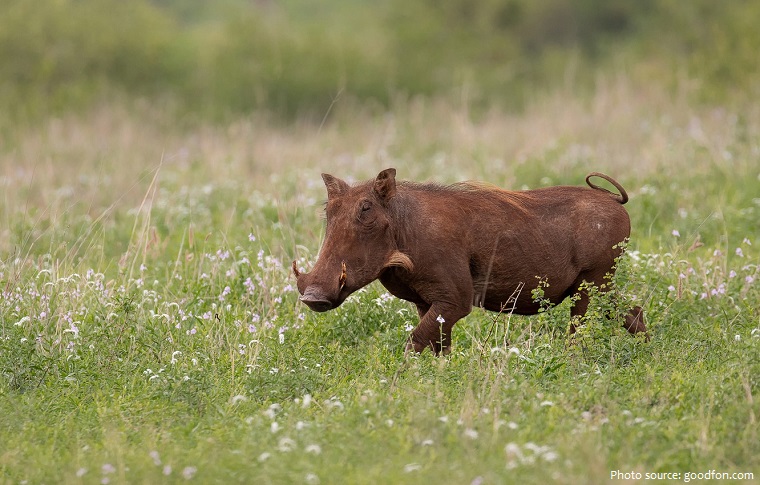 They are found in open and semi-open habitats, even in quite arid regions, in sub-Saharan Africa.

Although covered in bristly hairs, their bodies and heads appear largely naked from a distance, with only the crest along the back, and the tufts on their cheeks and tails being obviously haired. The male has two pairs of bumps, or warts, on the face.

They also have very distinct tusks, which reach a length of 25.5 to 63.5 centimetres (10 to 25 inches) in the males, but are always smaller in the females. 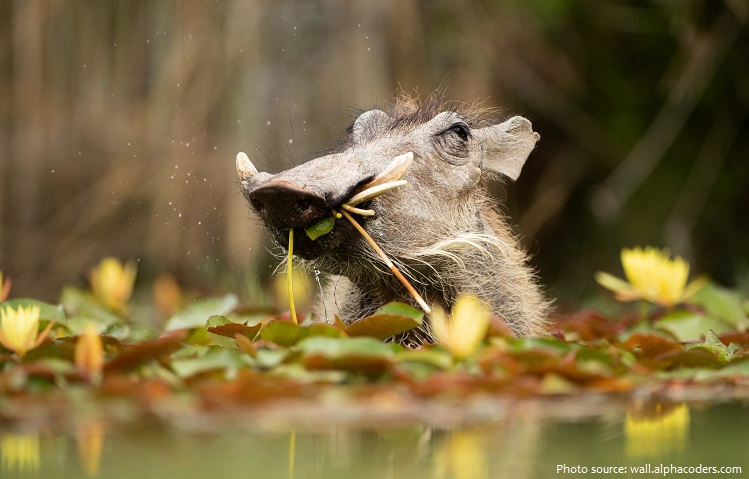 A tusk will curve 90° or more from the root, and will not lie flat on a table, as it curves somewhat backwards as it grows. The tusks are not used for digging, but are used for combat with other hogs, and in defense against predators – the lower set can inflict severe wounds.

Warthogs are remarkable for their strength, intelligence, and flexibility!

They are capable for reaching speeds of up to 55 kilometers (34 miles) per hour. 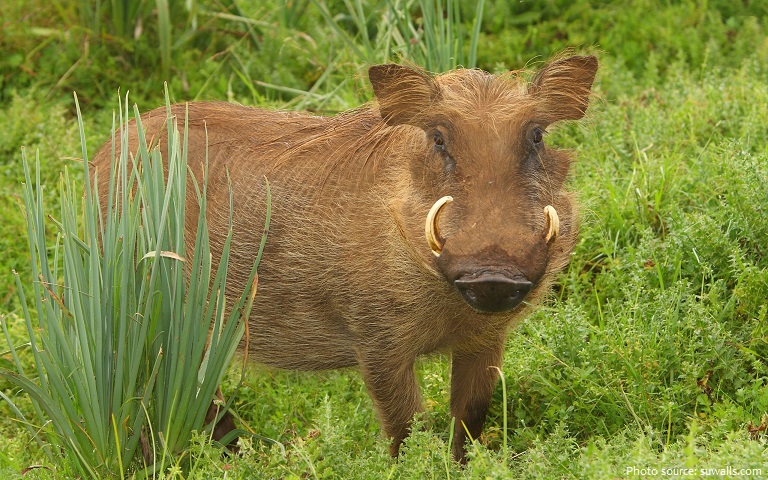 A warthog can go without water during Africa’s dry season (which can last for several months). During that period they survive only from water from the plants they eat.

When water is available, warthogs will seek it and often submerge to cool down. They will also wallow in mud for the same purpose—and to gain relief from insects. Birds also aid these hogs in their battle with insects; oxpeckers and other species sometimes ride along on their warthog hosts, feeding on the tiny creatures invading their hides.

As you might suspect when you look at their big snout, warthogs are good sniffers. It’s easy for them to smell things underground that they might want to eat. Warthogs often kneel down on their front legs and use their muscular snout to dig up dinner. They even shuffle along in the kneeling position if there are plenty of tasty things in the area. 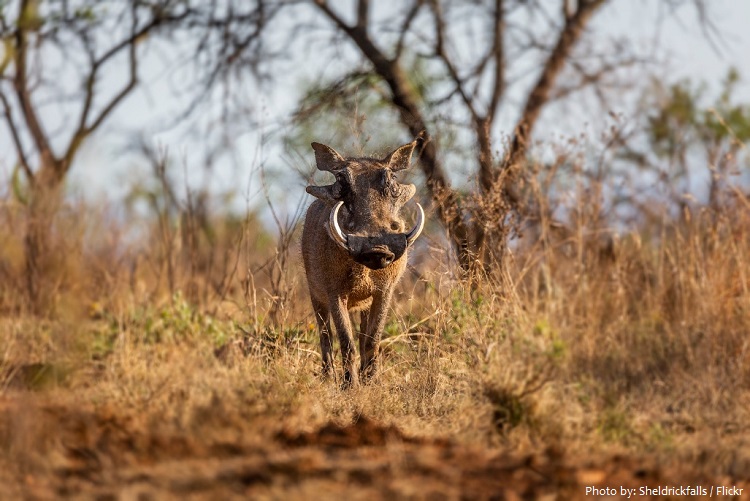 Instead of digging their own burrows, they find abandoned aardvark holes or natural burrows for homes. This is where they raise their young, sleep, and hide from predators. They usually back into the burrow, so they can use their sharp tusks to scare off any animal that bothers them. Burrows also protect them from temperature extremes. It may be hot at high noon or freezing in the middle of the night above ground, but the warthog remains comfy it its burrow.

Warthog females, called sows, are much more social than the males, called boars. They stay in groups of up to 40 with their young, called piglets. The sows communicate with all sorts of grunts, chirrups, growls, snorts, and squeals. These vocalizations can be greetings, threats, and warnings, among other things. The sows also like to rest close together and will even groom each other. 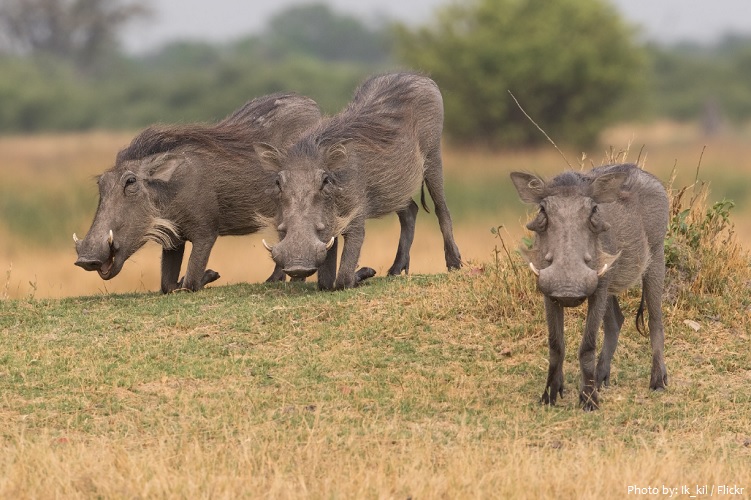 Warthogs mate once a year during the ‘rut’ (annual mating season), where boars find females by visiting their burrows. Males fight for the females by pushing, interlocking tusks and hitting each
other in the face or the sides of their body.

The typical gestation period is five to six months. When they are about to give birth, sows temporarily leave their families to farrow in a separate hole. The litter is 2–8 piglets, with 2–4
typical. The sow will stay in the hole for several weeks, nursing her piglets. 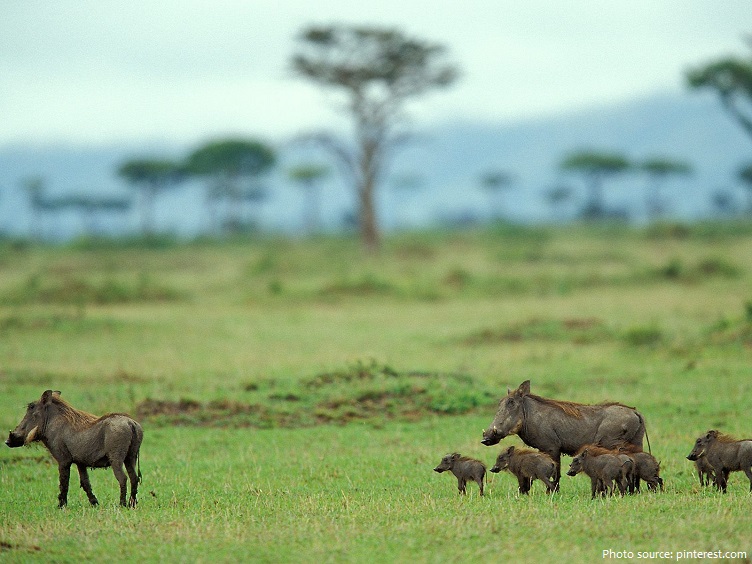 Unlike many of their African counterparts, they are not endangered. This is because they are so skilled at adapting to new threats. For example, most warthogs like to forage during the light of
the morning and early evening. But if they live in an area where people hunt them, they switch to foraging at night.

Lions, cheetahs, leopards, African wild dog, hyenas, and eagles all like to snack on a warthog when they get a chance.

Warthogs are iconic animals of the African savanna, so they can contribute to ecotourism.

The warthog Pumbaa and his meerkat friend Timon are important characters of Disney’s 1994 animated film The Lion King and its franchise.