Vancouver is the largest city in British Columbia, Canada.

It is a coastal city and major seaport on the mainland of southwestern British Columbia.

The city lies between Burrard Inlet (an arm of the Strait of Georgia) to the north and the Fraser River delta to the south, opposite Vancouver Island.

As of January 2020, the population of Vancouver is about 650,000 people. Metro Vancouver has a population of about 2.5 million people. That makes it the third largest metropolitan area in Canada.

The highest point in Vancouver is 152 meters (501 feet) above sea level and the lowest point is the sea level. 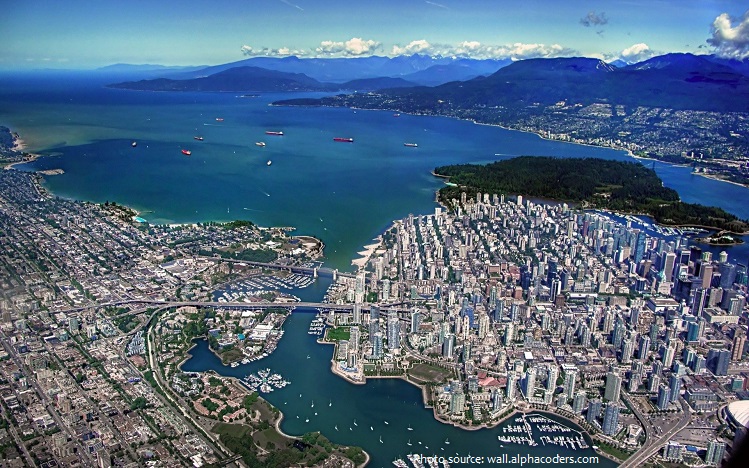 The first Europeans to explore the area were Spanish Captain José María Narváez in 1791, and British naval Captain George Vancouver in 1792.

The city takes its name from George Vancouver. The family name “Vancouver” itself originates from the Dutch “Van Coevorden”, denoting somebody from the city of Coevorden, Netherlands. The explorer’s ancestors came to England “from Coevorden”, which is the origin of the name that eventually became “Vancouver”.

The area was not settled by Europeans until 1862.

Thousands of miners, mostly from California, flooded into the region in the 1860s, attracted by the gold rush in the Cariboo Mountains to the northeast.

Vancouver was incorporated as a city in April 1886. 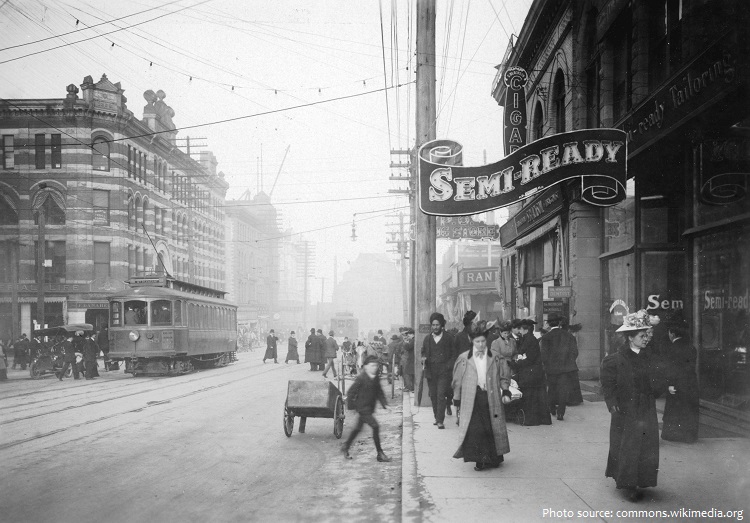 By the 1930s Vancouver was Canada’s major Pacific coast port.

After World War II it developed into Canada’s main business hub for trade with Asia and the Pacific Rim.

Today, Vancouver is a thriving city.

Gastown is the original settlement that became the core of the creation of Vancouver. Currently, it is a national historic site and a neighbourhood in the northwest end of Downtown Eastside, adjacent to Downtown Vancouver.

The Vancouver Art Gallery (VAG) is an art museum located at 750 Hornby Street in Vancouver. It is a permanent collection of about 11,000 artworks includes more than 200 major works by Emily Carr, the Group of Seven, Jeff Wall, Harry Callahan and Marc Chagall. 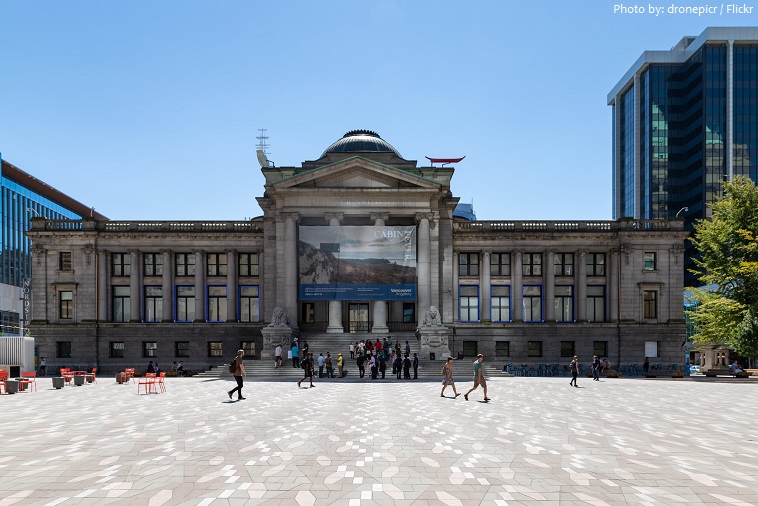 The Metropolitan Cathedral of Our Lady of the Holy Rosary, commonly known as Holy Rosary Cathedral, is a late 19th-century French Gothic revival church that serves as the cathedral of the Roman Catholic Archdiocese of Vancouver. The construction of the cathedral began in 1899 on the site of an earlier church by the same name. It opened on the Feast of the Immaculate Conception on December 8, 1900, was blessed the day after, and was consecrated in 1953. 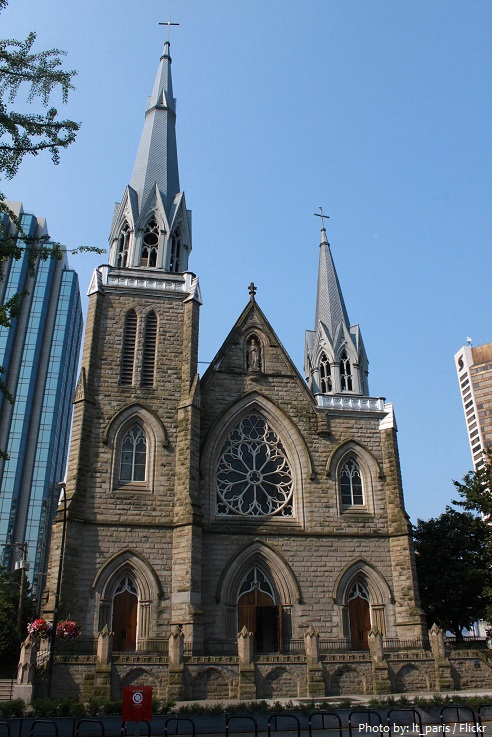 Canada Place is a building situated on the Burrard Inlet waterfront of Vancouver. It is the home of the Vancouver Convention Centre, the Pan Pacific Vancouver Hotel, Vancouver’s World Trade Centre, and the virtual flight ride FlyOver Canada. The building’s exterior is covered by fabric roofs resembling sails. 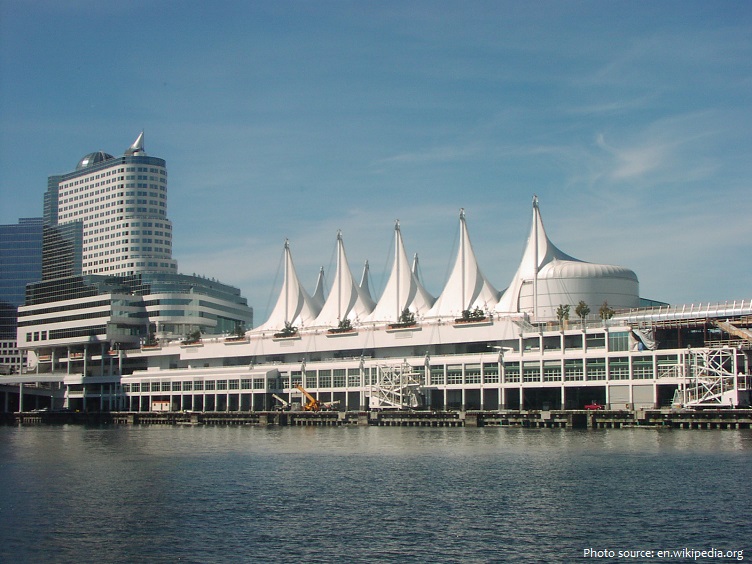 Stanley Park is a 405-hectare (1,000-acre) public park that borders the downtown of Vancouver and is mostly surrounded by waters of Burrard Inlet and English Bay. The park has a long history and was one of the first areas to be explored in the city. The land was originally used by Indigenous peoples for thousands of years before British Columbia was colonized by the British during the 1858 Fraser Canyon Gold Rush. The land was later turned into Vancouver’s first park when the city incorporated in 1886. 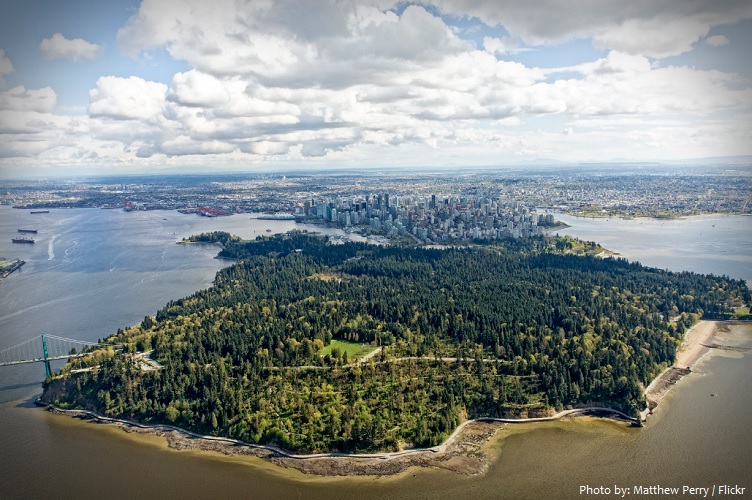 The Vancouver Aquarium is a public aquarium located in Stanley Park in Vancouver. In addition to being a major tourist attraction for Vancouver, the aquarium is a centre for marine research, conservation and marine animal rehabilitation. 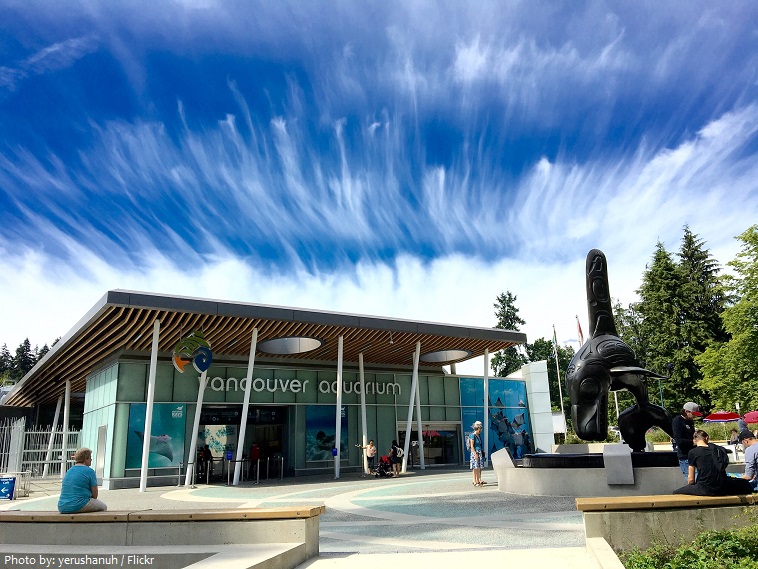 Granville Island is a peninsula and shopping district in Vancouver. The peninsula was once an industrial manufacturing area, but today it is a hotspot for Vancouver tourism and entertainment. The area has received much acclaim in recent years for its buildings and shopping experience. 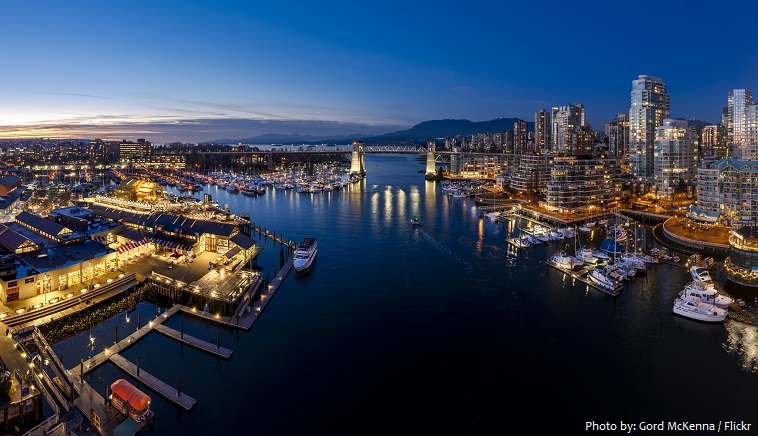 Science World is a science centre run by a not-for-profit organization in Vancouver. It features many permanent interactive exhibits and displays, as well as areas with varying topics throughout the years. 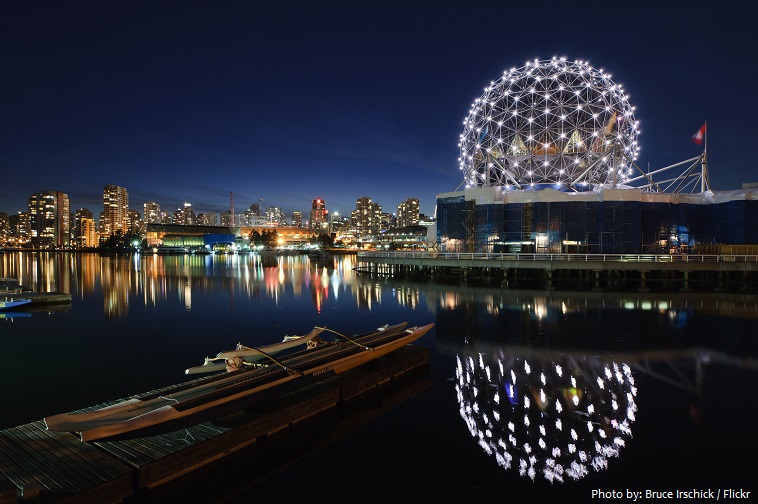 Queen Elizabeth Park is a 53-hectare (130-acre) municipal park located in Vancouver on Little Mountain (elevation approximately 152 metres or 500 feet above sea level). Its surface was scarred at the turn of the twentieth century when it was quarried for its rock, which served to build Vancouver’s first roadways. 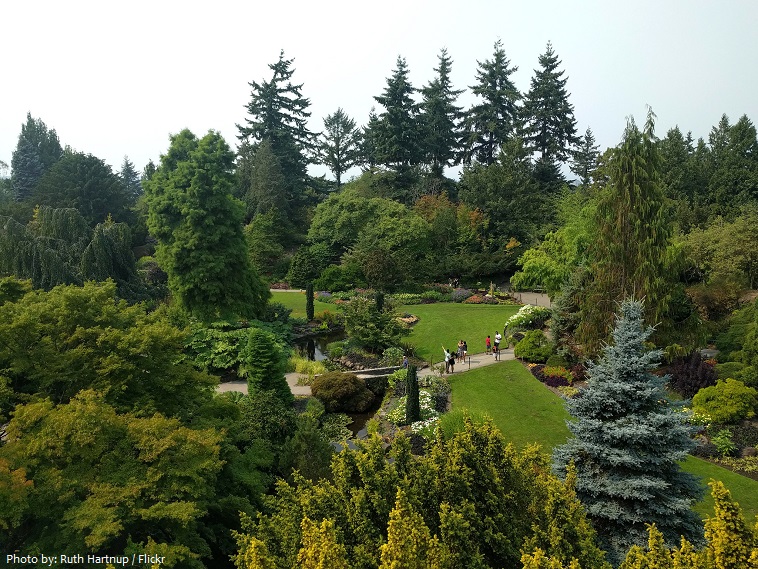 The Capilano Suspension Bridge is a simple suspension bridge crossing the Capilano River in the District of North Vancouver. The current bridge is 140 metres (460 feet) long and 70 metres (230 feet) above the river. It is part of a private facility with an admission fee, and draws over 1.2 million visitors per year. 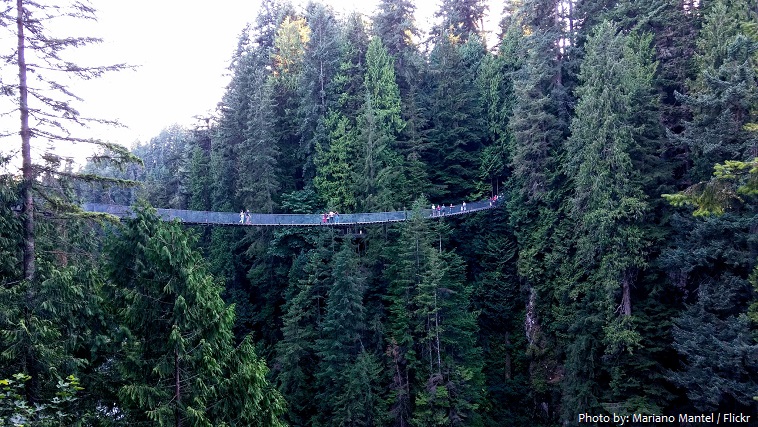 A steam clock is a clock which is fully or partially powered by a steam engine. Only a few functioning steam clocks exist, most designed and built by Canadian horologist Raymond Saunders for display in urban public spaces. The first steam clock was built in 1977 at the corner of Cambie and Water streets in Vancouver’s Gastown neighbourhood. 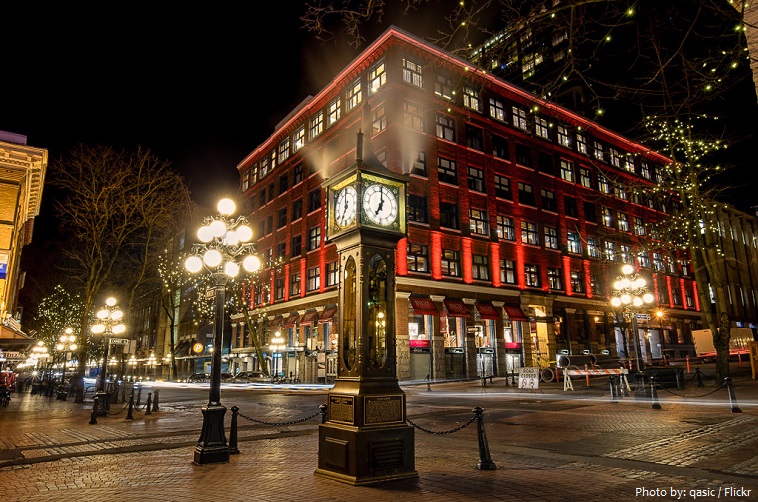 Vancouver is one of the most ethnically and linguistically diverse cities in Canada according to that census; 52% of its residents have a first language other than English. 48.9% have neither English nor French as their first language. Approximately 30% of the city’s inhabitants are of Chinese heritage.

Vancouver is consistently named as one of the top five worldwide cities for livability and quality of life, and the Economist Intelligence Unit acknowledged it as the first city ranked among the top-ten of the world’s most well-living cities for five consecutive years.

The city is a centre for film and television production. Nicknamed Hollywood North, a distinction it shares with Toronto, the city has been used as a film making location for nearly a century.

Vancouver is one of Canada’s warmest cities in the winter.

In 2010 the Winter Olympics were held in Vancouver.