Valencia is a charming old city and the capital of the Old Kingdom of Valencia province of Spain.

It is located on the Mediterranean coast at the mouth of the Turia River in a region surrounded by orchards.

As of January 2020, the population of Valencia is about 850,000 people. It is the 3rd-largest city in Spain after Madrid and Barcelona.

The average altitude is 15 meters (49 feet) above sea level. 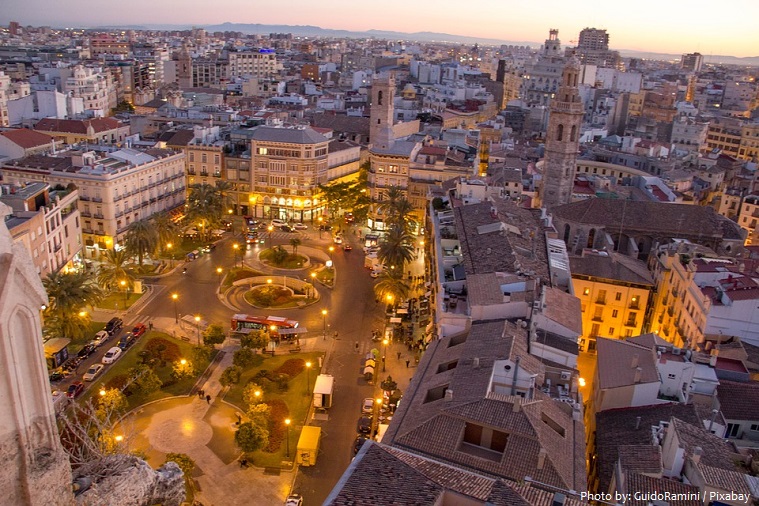 The history of Valencia, one of the oldest cities in Spain, begins over 2100 years ago with its founding as a Roman colony under the name “Valentia Edetanorum”.

In 714 Moroccan and Arab Moors occupied the city, introducing their language, religion and customs; they implemented improved irrigation systems and the cultivation of new crops as well.

In 1238 the Christian king James I of Aragon conquered the city and divided the land among the nobles who helped him conquer it. The Moors have been banished from the city, but they left a mark that remains to this day in the artistic influences, recipes and water system to be found in the city.

The Golden Era of Valencia is said to be during the 14th and 15th centuries in Valencia. This was a time when the economy flourished due to agriculture and maritime trade. This meant that lots of emblematic buildings were constructed during this period. 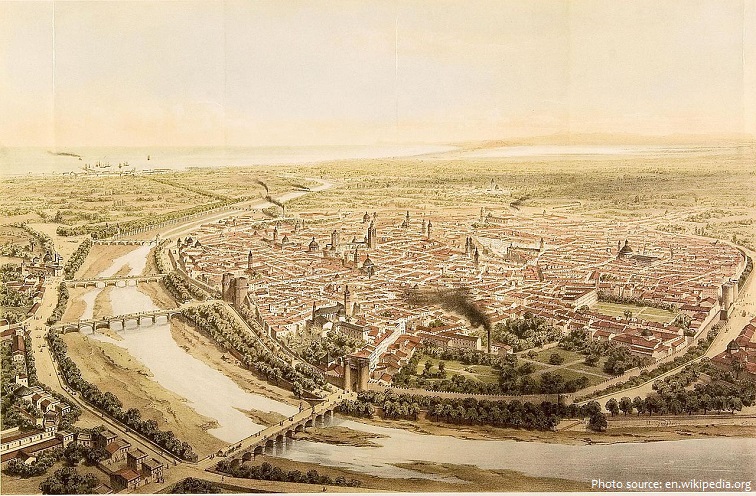 In the 18th century Philip V of Spain abolished the privileges as punishment to the kingdom of Valencia for aligning with the Habsburg side in the War of the Spanish Succession.

Valencia was the capital of Spain when Joseph Bonaparte moved the Court there in the summer of 1812. It also served as capital between 1936 and 1937, during the Second Spanish Republic.

Today, Valencia is known for its architecture, port, beaches, food and cultural events.

The City of Arts and Sciences is a cultural and architectural complex in the city of Valencia, Spain. It is the most important modern tourist destination in the city of Valencia and one of the 12 Treasures of Spain. It is situated at the end of the former riverbed of the river Turia, which was drained and rerouted after a catastrophic flood in 1957. The old riverbed was turned into a picturesque sunken park. 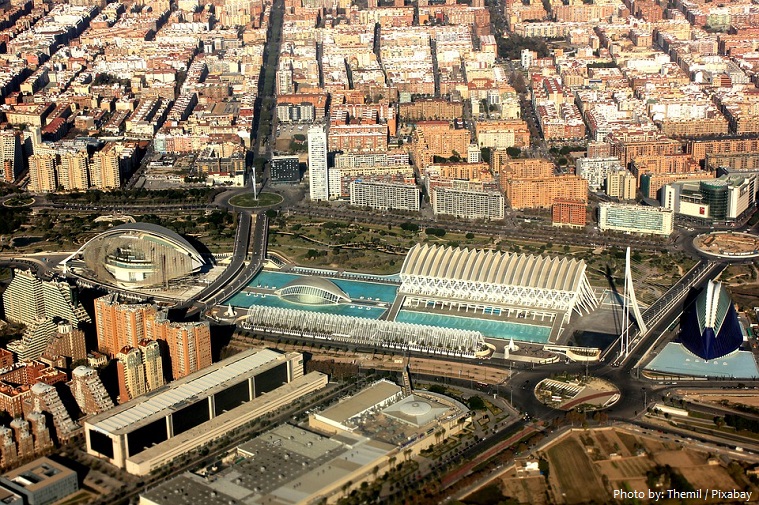 L’Hemisfèric is an IMAX Cinema, planetarium and laserium. The building is meant to resemble a giant eye, and has an approximate surface of 13,000 m². The Hemesfèric, also known as the planetarium or the “eye of knowledge”, is the centerpiece of the City of Arts and Sciences. It was the first building completed in 1998.

L’Oceanogràfic is an oceanarium situated in the City of Arts and Sciences. It was opened on 14 February 2003. The Oceanographic is the largest complex of its type in Europe , with a surface of 110,000 square metres (1,200,000 square feet) and a water capacity of 42,000,000 litres (11,000,000 US gal). There are 45,000 animals of 500 different species including fish, mammals, birds, reptiles and invertebrates — amongst these are sharks, penguins, dolphins, sea lions, walruses, beluga whales, and more — all inhabiting nine underwater towers. 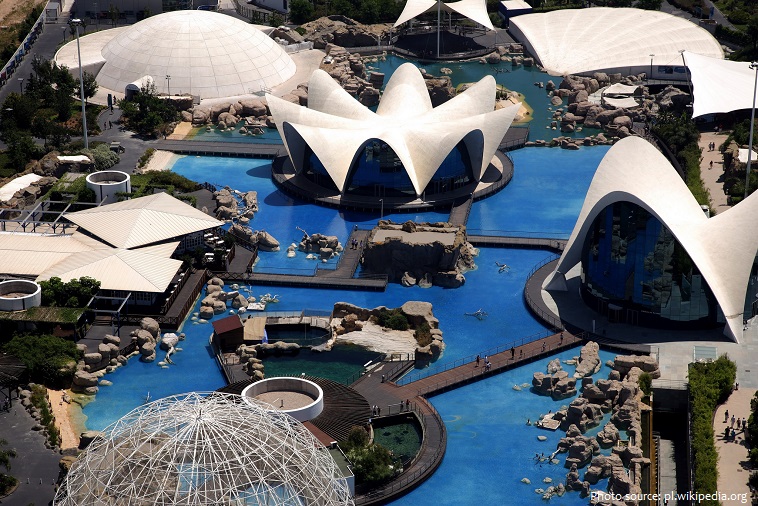 The Museu de les Ciències Príncipe Felipe is an interactive science museum. It forms part of the City of Arts and Sciences. It opened on 13 November 2000. It is over 40,000 square meters in area and resembles the skeleton of a whale. It is a popular visitor attraction in Valencia.

Mercado Central or Mercat Central is a public market located in central Valencia. It is one of the main works of the Valencian Art Nouveau. Its unusual roof comprises original domes and sloping sections at different heights, while the interior seems to be lined in a range of materials such as iron, wood, ceramics and polychromed tiles. The beauty of the building stands out especially on account of the light that enters through the roof at various points, and through coloured window panels. The Central Market of Valencia is one of the largest in Europe, covers more than 8,000 square metres 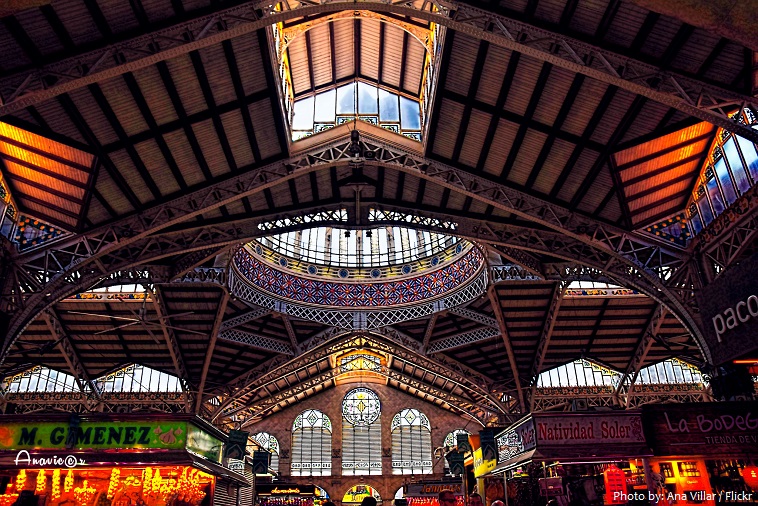 The Llotja de la Seda is a late Valencian Gothic-style civil building in Valencia. It was built in the 15th century and today is a principal tourist attraction in the city. The UNESCO considered it as a World Heritage Site in 1996 since “the site is of outstanding universal value as it is a wholly exceptional example of a secular building in late Gothic style, which dramatically illustrates the power and wealth of one of the great Mediterranean mercantile cities.” 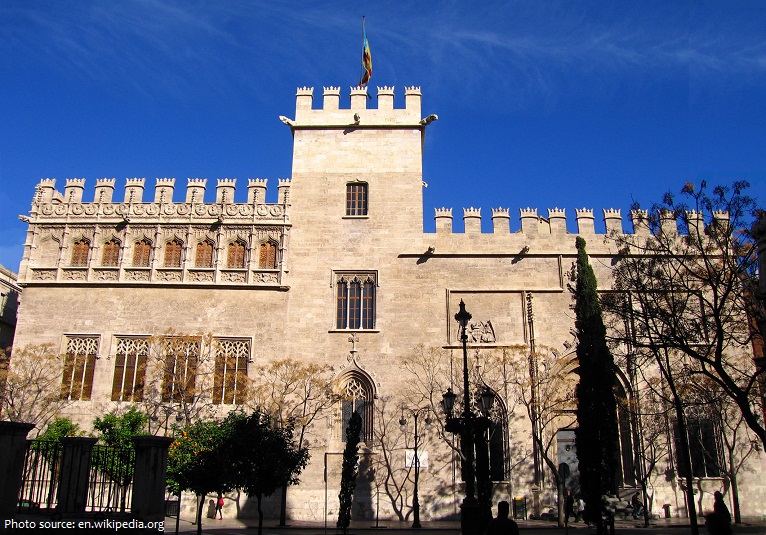 The Metropolitan Cathedral–Basilica of the Assumption of Our Lady of Valencia, alternatively known as Saint Mary’s Cathedral or Valencia Cathedral, is a Roman Catholic parish church in Valencia. The cathedral was consecrated in 1238 by the first bishop of Valencia. It was dedicated to Saint Mary by order of James I the Conqueror. It was built over the site of the former Visigothic cathedral, which under the Moors had been turned into a mosque. 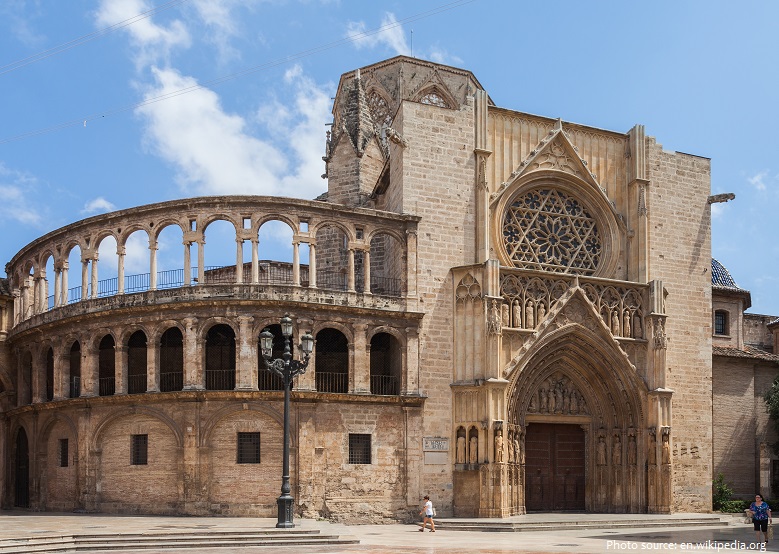 The Serrans Gate is one of the twelve gates that formed part of the ancient city wall, the Christian Wall, of the city of Valencia. It was built in Valencian Gothic style at the end of the 14th century. It is an important landmark and one of the best preserved monuments of Valencia. 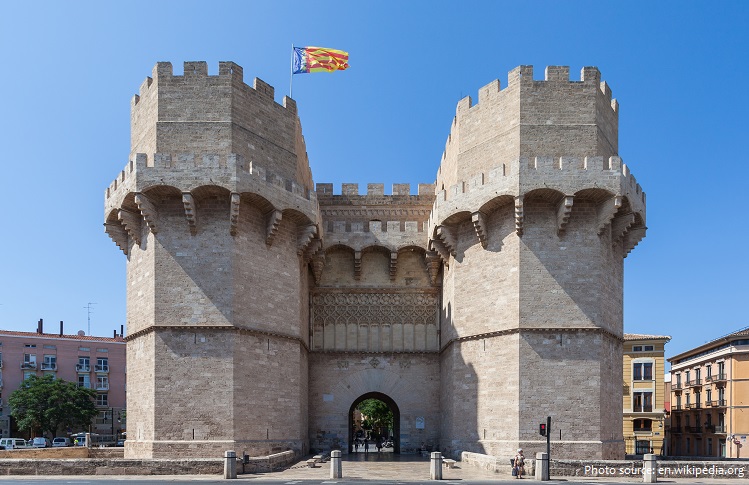 Views and cultural attractions makes Valencia one of the country’s most popular tourist destinations.

Valencia has been called the city of the 100 bell towers.

The city is known for its gastronomic culture. The traditional Spanish dish paella (a simmered rice dish with meat (usually chicken or rabbit) or seafood) was born in Valencia.

Due to its long history, this is a city with numerous popular celebrations and traditions, such as the Fallas (featuring the paella), which were declared as Fiestas of National Tourist Interest of Spain in 1965 and Intangible cultural heritage by UNESCO in November 2016. 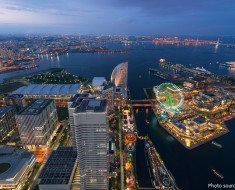 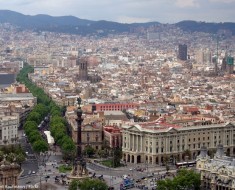 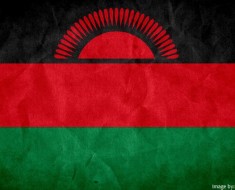 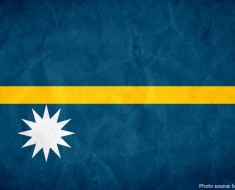 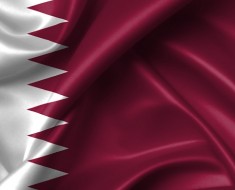