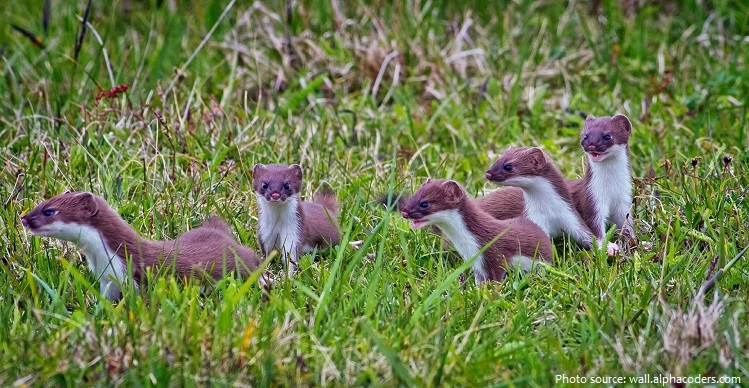 The stoat (Mustela erminea), also known as the ermine and short-tailed weaselermine is a small mammal of the family Mustelidae.

Stoats are found in the north temperate regions of Eurasia and North America. In the New World, they range from east to west in a broad belt from the Arctic Ocean and adjacent islands of the Canadian Archipelago southward into the northern United States. 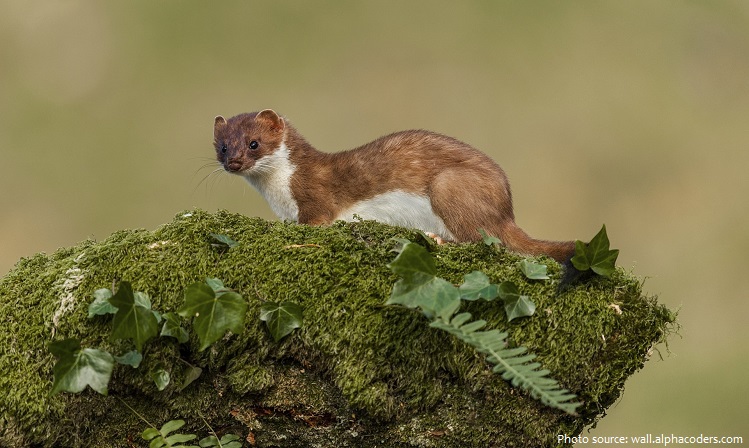 The average lifespan of a stoat is 1 to 2 years, and the maximum is 7 years.

In summer the stoat is brown, with a whitish throat, chest, and belly. In colder climates the winter coat is white, except for the black tail tip. In moderately cold climates the fur becomes only partly white. 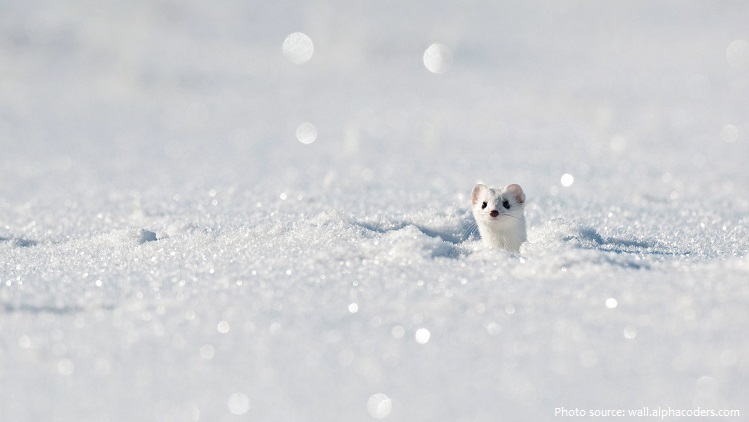 The stoat’s lithe, agile body allows it to move swiftly both above ground and through underground burrows.

Although ermine are primarily terrestrial, they climb trees and swim well.

Stoats are carnivores that hunt primarily at night. They eat mostly small rodents, and in particular mice, voles, and lemmings. Stoats will also eat squirrels, rabbits, insects, birds and their eggs, and sometimes fish, reptiles, amphibians, and invertebrates. 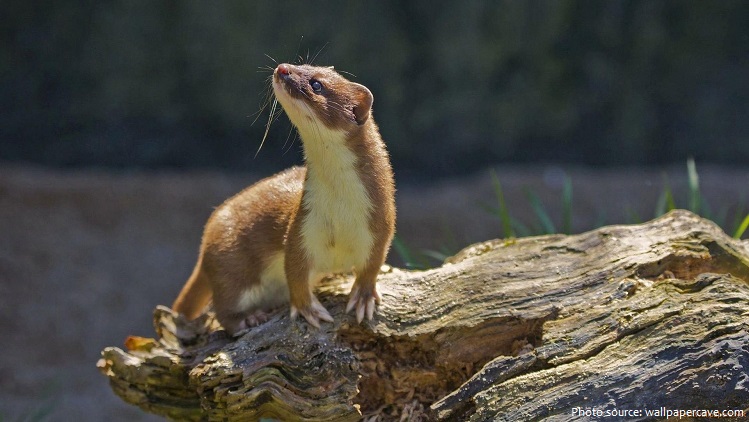 Stoats live alone and are territorial. They mate once a year and have several babies, which are called kits. The kits may not develop for 8-9 months after the female becomes pregnant. When weather conditions are good and there is plenty of food, the kits begin to grow and are born within a month.

The root word for “stoat” is likely either the Dutch word stout (“naughty”) or the Gothic word 𐍃𐍄𐌰𐌿𐍄𐌰𐌽 (stautan, “to push”). 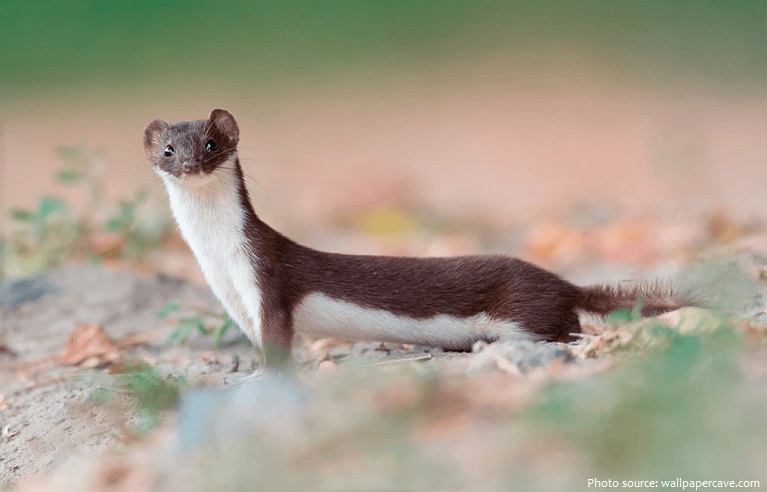 According to John Guillim, in his Display of Heraldrie, the word “ermine” is likely derived from Armenia, the nation where it was thought the species originated, though other authors have linked it to the Norman French from the Teutonic harmin (Anglo-Saxon hearma). This seems to come from the Lithuanian word šarmu.

The animal’s pelt was used historically in royal robes in Europe, and the term ermine also refers to the animal’s white coat, sold in the fur trade.

During the reign of Edward III (1327–77) of England, the wearing of ermine was restricted to members of the royal family. Thereafter, state robes were constructed in such a way that in many cases the rank and position of the wearer could be determined by the presence or absence or disposition of the black spots. 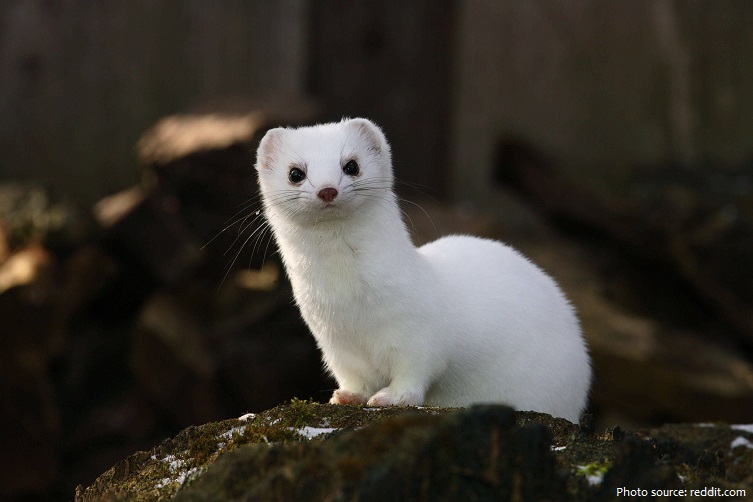 Ermine luxury fur was used in the 15th century by Catholic monarchs, who sometimes used it as the mozzetta cape.

Lady with an Ermine is a painting by Italian artist Leonardo da Vinci from around 1489–1490 and one of Poland’s national treasures.

The stoat is classed by the International Union for Conservation of Nature (IUCN) as least concern, due to its wide circumpolar distribution, and because it does not face any significant threat to its survival.

In the late 19th century, stoats were introduced into New Zealand to control rabbits, where they have had a devastating effect on native bird populations. 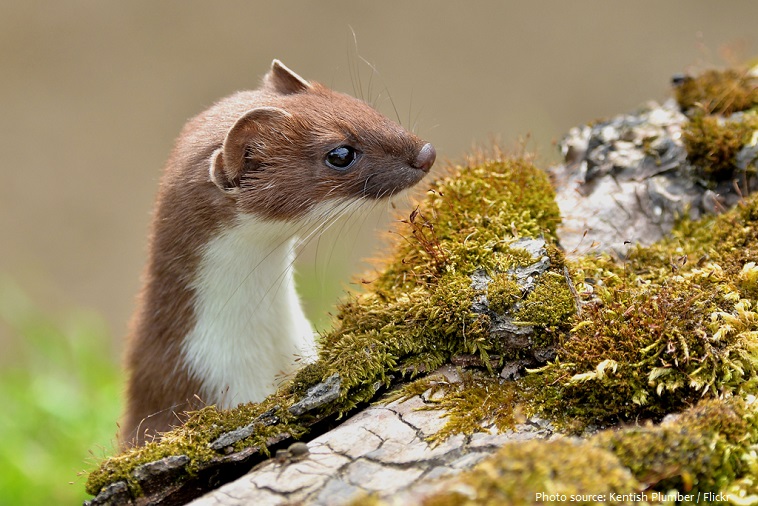 It was nominated as one of the world’s top 100 “worst invaders”.

It is distinguished from the least weasel by its larger size and longer tail with a prominent black tip.

In Irish mythology, stoats were viewed anthropomorphically as animals with families, which held rituals for their dead.

In the Zoroastrian religion, the stoat is considered a sacred animal, as its white winter coat represented purity.

Similarly, Mary Magdalene was depicted as wearing a white stoat pelt as a sign of her reformed character. 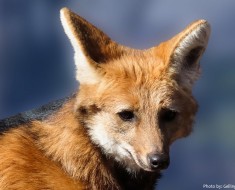 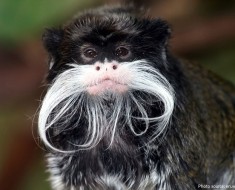 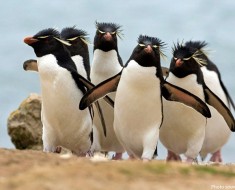 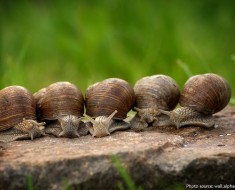 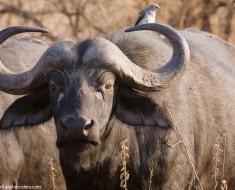