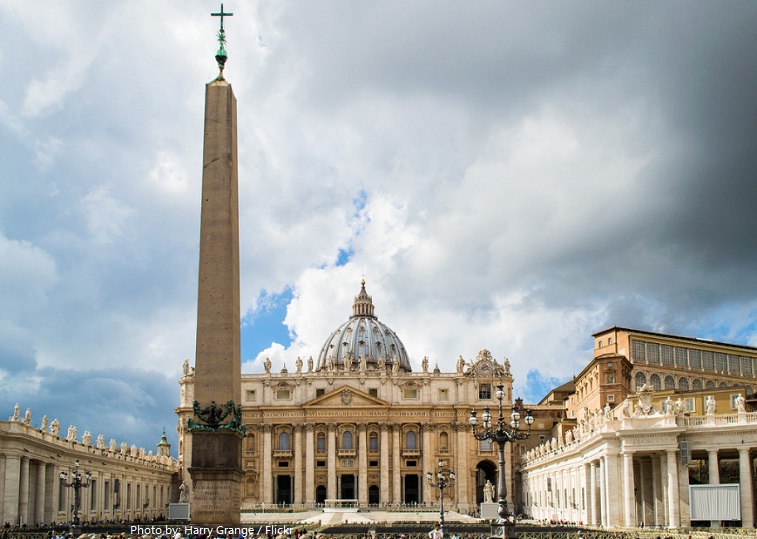 Designed principally by Donato Bramante, Michelangelo, Carlo Maderno and Gian Lorenzo Bernini, St. Peter’s is the most renowned work of Renaissance architecture and one of the largest churches in the world. 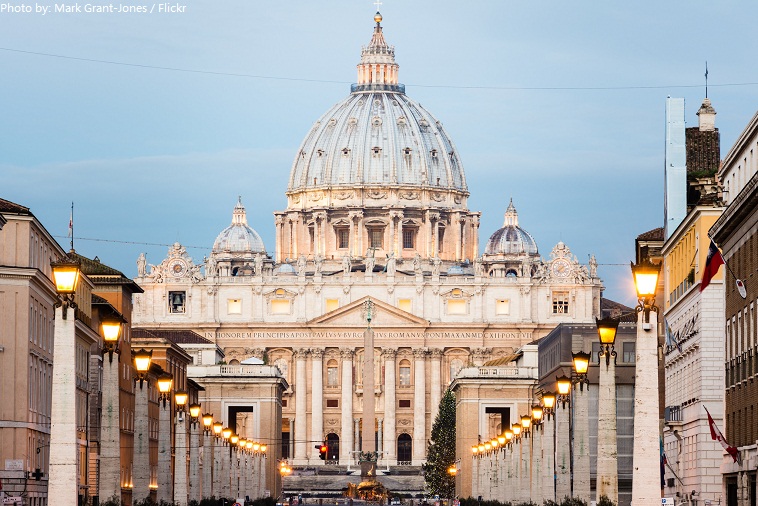 The crowning piece of the St. Peter’s Basilica is the majestic dome, a masterpiece designed by Michelangelo.The basilica’s dome is one of the world’s largest measuring 42 meters in diameter and reaching 132.5 meters (434.7 feet)  high. 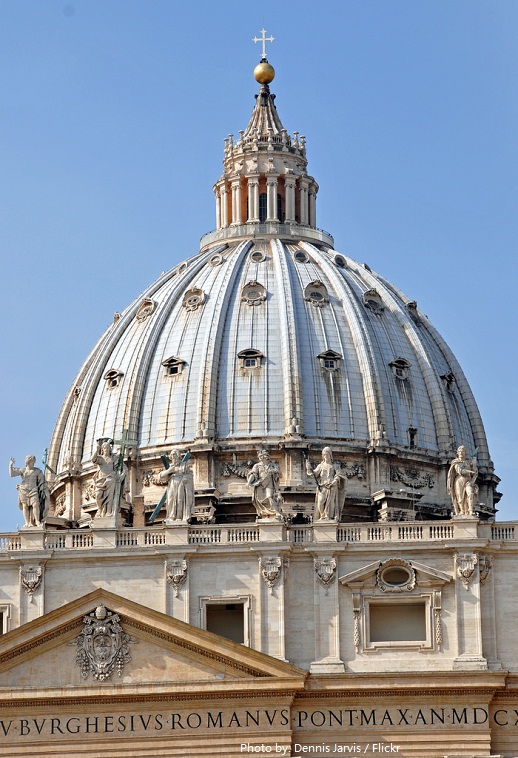 The facade designed by Maderno, is 114.69 meters (376.3 ft) wide and 45.55 meters (149.4 ft) high and is built of travertine stone, with a giant order of Corinthian columns and a central pediment rising in front of a tall attic surmounted by thirteen statues: Christ flanked by eleven of the Apostles (except St. Peter, whose statue is left of the stairs) and John the Baptist. 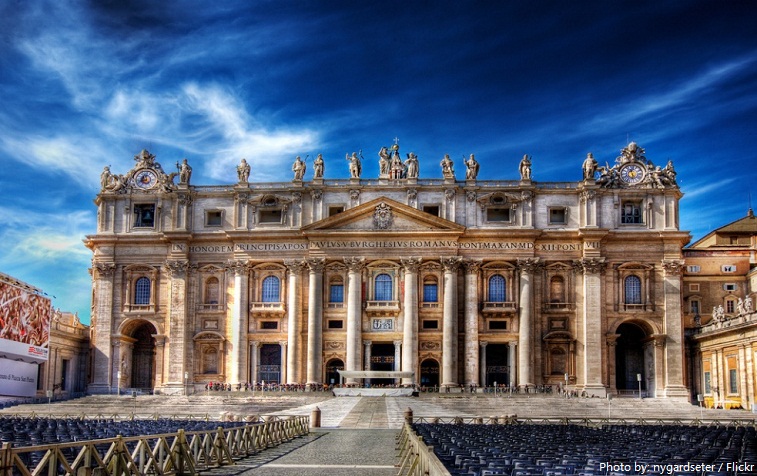 On either side are huge clocks supported by angels and decorated with ornaments and the papal crest. They were added in the early nineteenth century and are the work of Giuseppe Valadier. 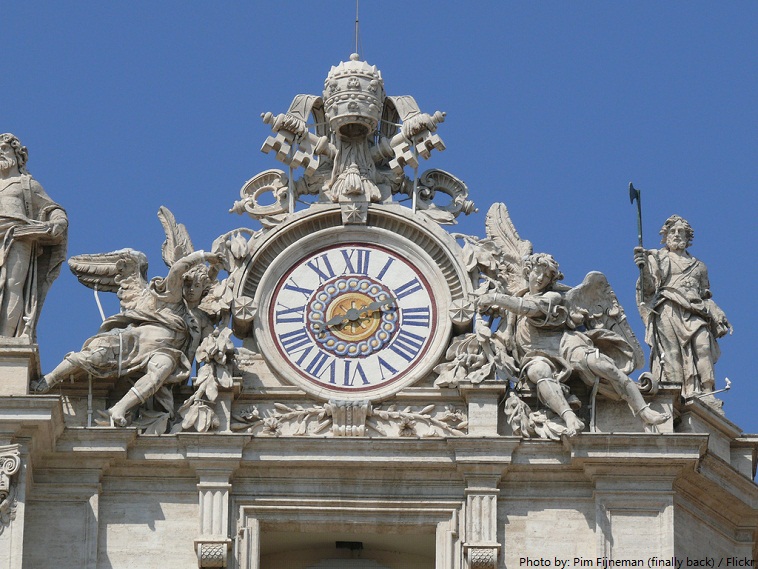 Behind the façade of St. Peter’s stretches a long portico or “narthex” such as was occasionally found in Italian Romanesque churches.This is the part of Maderno’s design with which he was most satisfied. 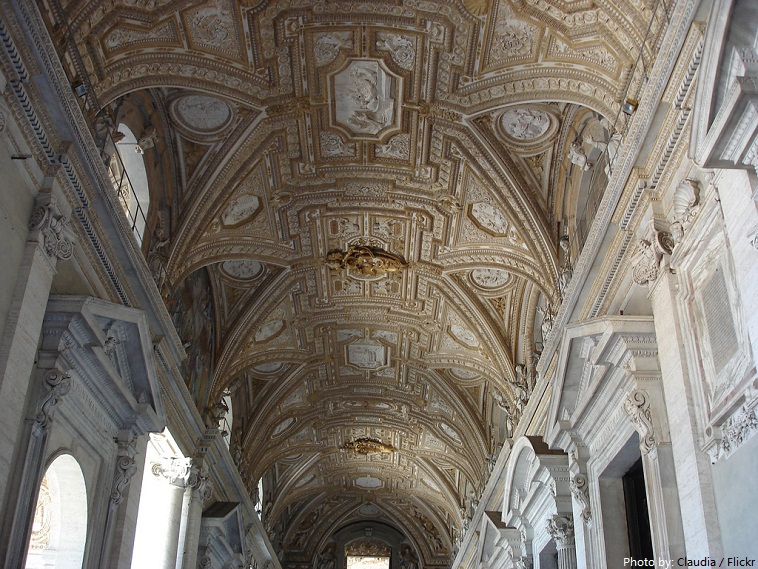 Five portals, of which three are framed by huge salvaged antique columns, lead into the basilica.

The northernmost door is the Holy Door, in bronze by Vico Consorti (1950), which is by tradition only opened for great celebrations such as Jubilee years. 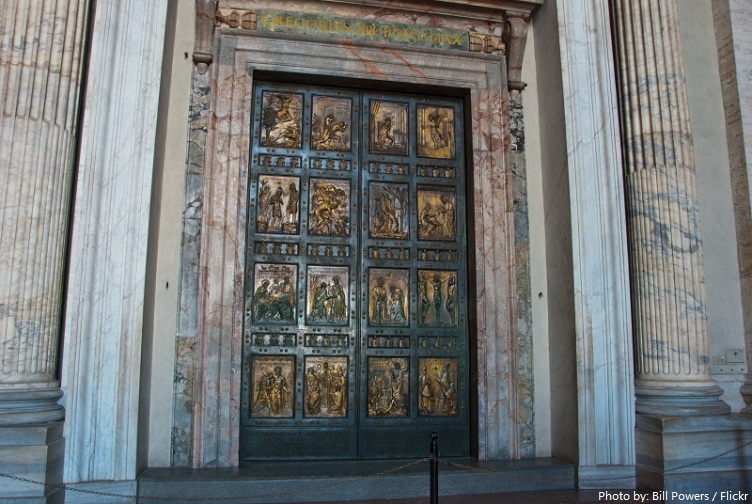 The central portal has a bronze door created by Antonio Averulino in 1455 for the old basilica and somewhat enlarged to fit the new space. 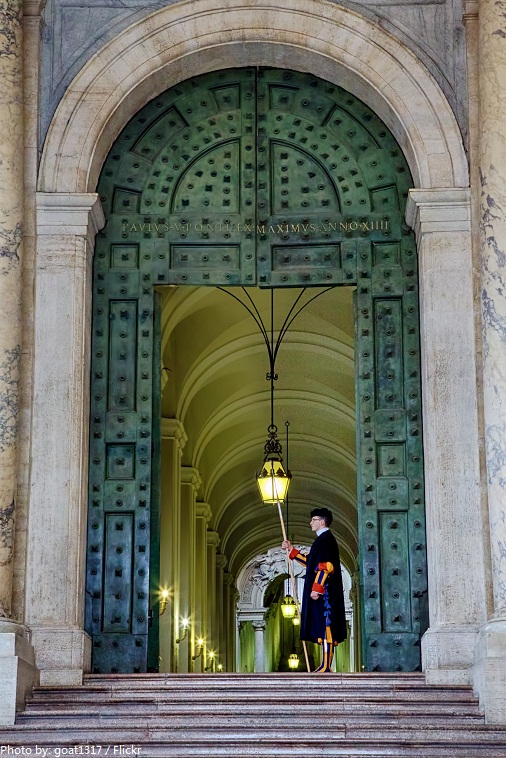 The Latin cross structure of the interior dates back to the early 1600’s and was designed by Maderno, who completed the basilica and built the nave and the two aisles, forming a whole with the Michelangelesque central octagon. 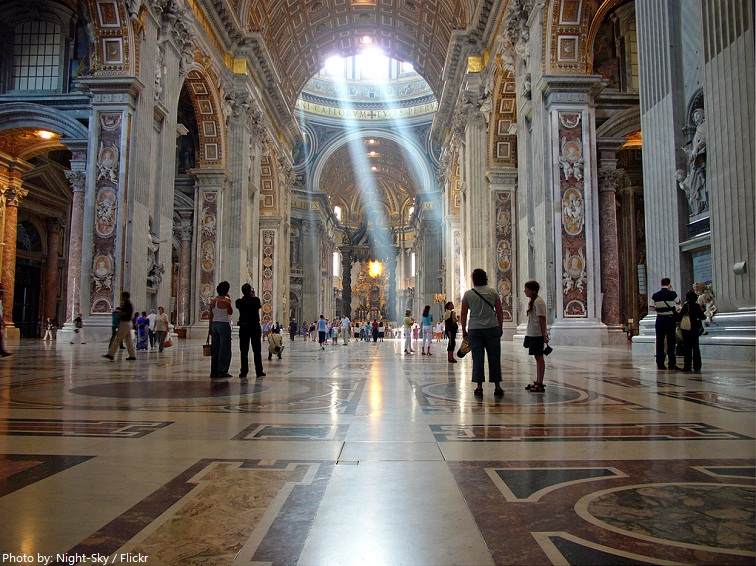 The opulence of the interior bears testimony to the wealth of the Catholic church in the sixteenth and seventeenth centuries. It is decorated with large monuments, many of which were created by Gian Lorenzo Bernini, one of the greatest artists of all time.

At the crossing of the transepts is the central focus of the interior, the baldacchino. This monumental canopy shelters the papal altar and the holy relics of St. Peter. Artistically, it also serves to fill the vertical
space under Michelangelo’s great dome. 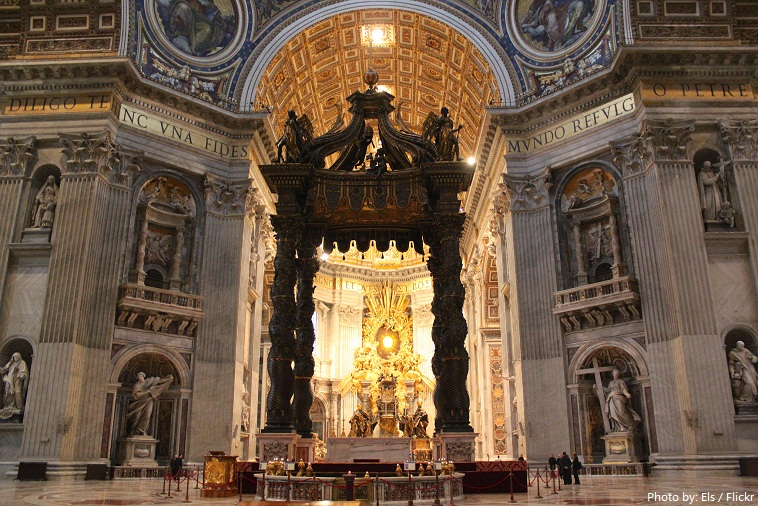 In front of the papal altar is the confessio (burial crypt) that marks the presumed grave of St. Peter. It is encircled by a balustrade with ninety-five bronze oil lamps. 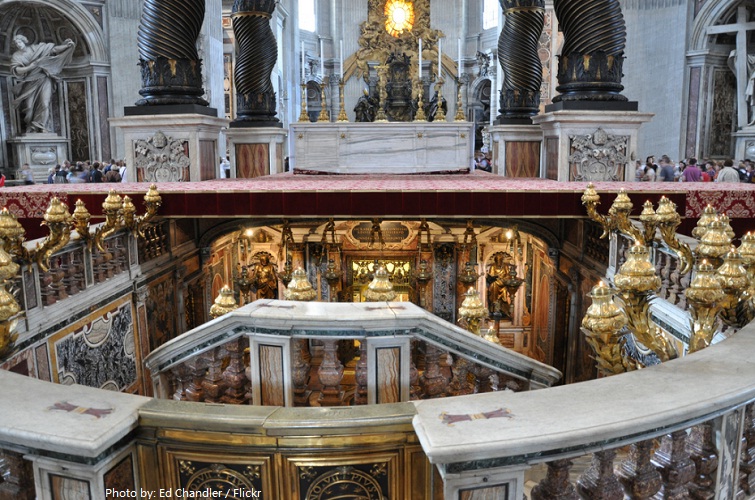 The confessio is located right below the majestic dome. 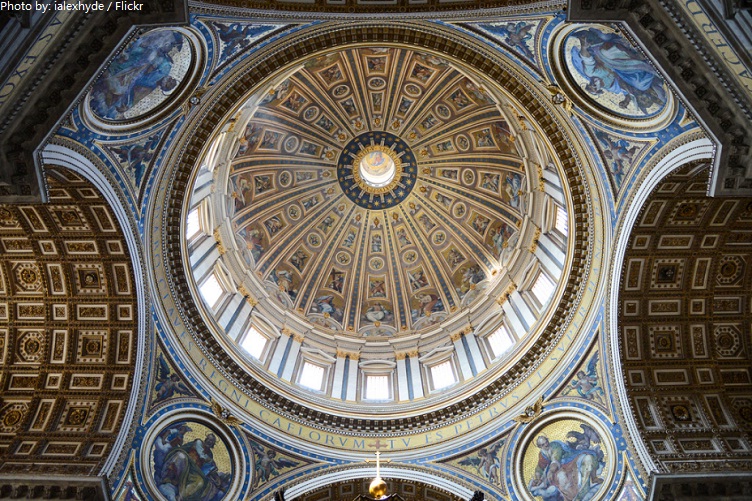 At the far west end of the basilica is the tribune, which centers on the Cathedra of St. Peter. The enormous gilded bronze monument was designed by Bernini in 1666 to enclose an oak throne donated by Carolingian ruler Charles the Bald upon his coronation in St. Peter’s in 875. 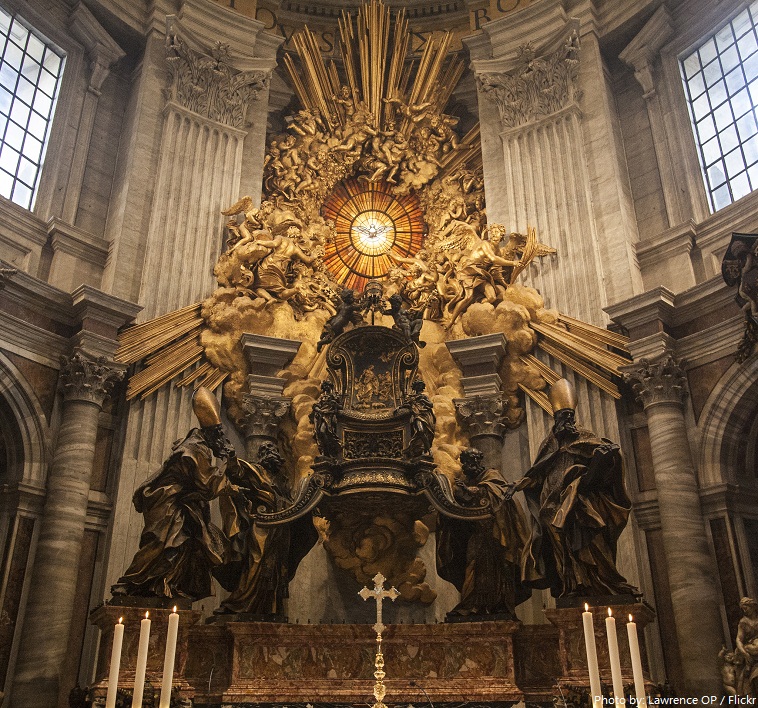 The tomb of pope Urban VIII, to the right of the throne, was also created by Bernini. 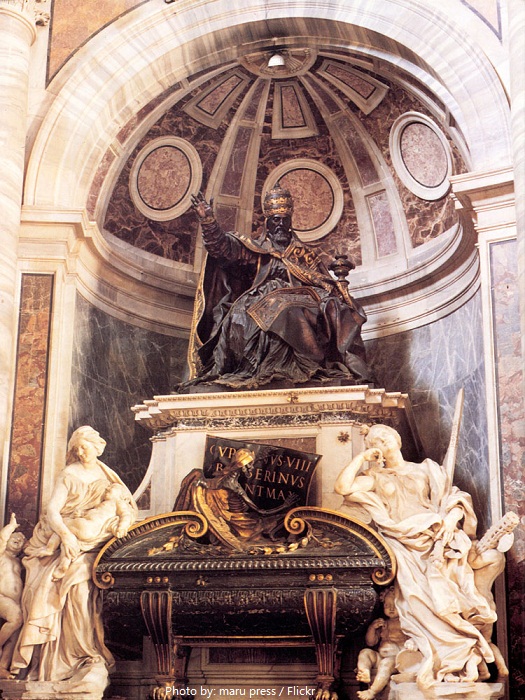 There are plenty tombs and sepulchral monuments in St. Peter’s Basilica, most notably the monument to Alexander VII, another work of Bernini. 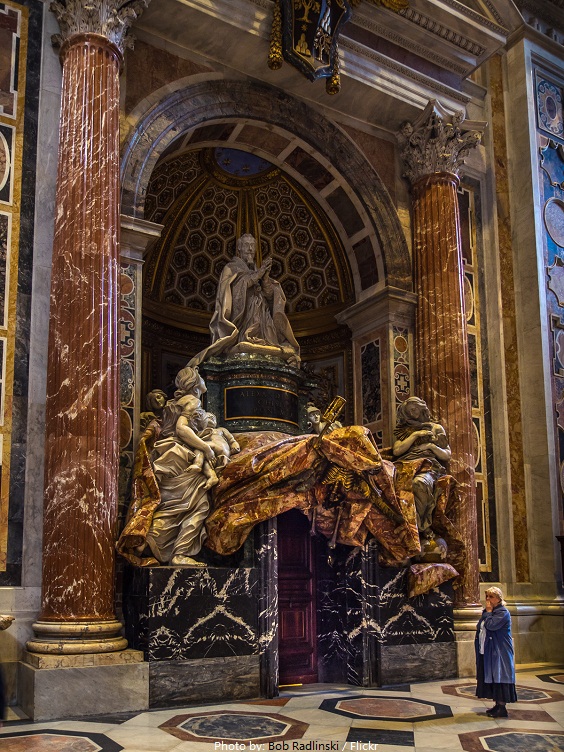 The most famous monument in the St. Peter’s Basilica, Michelangelo’s statue Pieta is located in a bulletproof glass. It is the only work he ever signed. 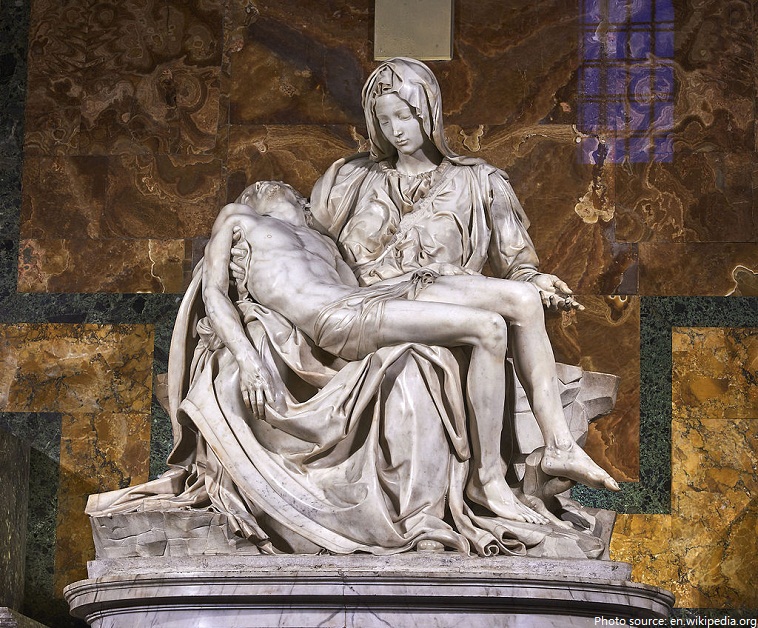 The pillar with the statue of Longinus also provides the backdrop for a bronze statue of St. Peter. 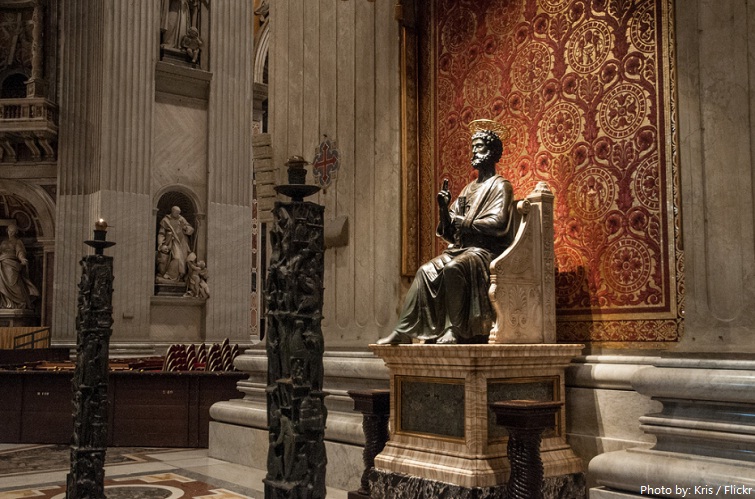 Most of the paintings in the church are replicas of the original paintings created for the basilica, many of which are now on display in the Vatican Pinacoteca. The high humidity in the church ruined the oil paintings which started to suffer from mold damage. 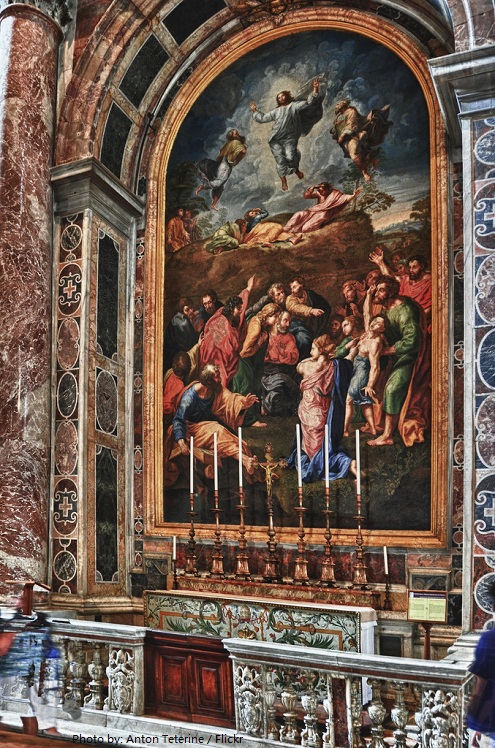 The floor of the basilica has a colorful marble pattern. 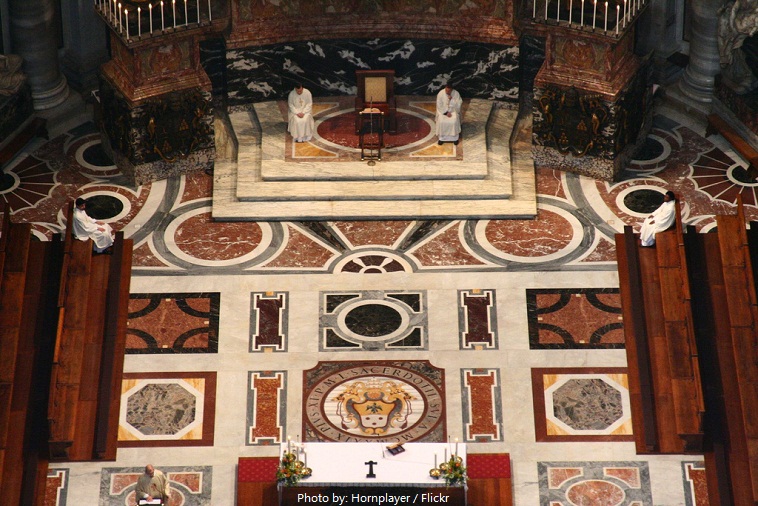 There are 491 stairs to the top of Michelangelo’s dome of St. Peter’s Basilica.

There is a viewing platform at the base of the lantern from where you can enjoy an unparalleled panorama over Rome.

St. Peter’s Basilica is home to more than 100 tombs, including the tombs of 91 popes, Holy Roman Emperor Otto II, and Queen Christina, the Swedish woman who gave up the thrown to convert to Catholicism. 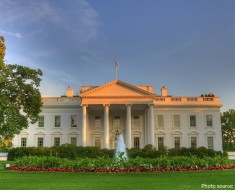 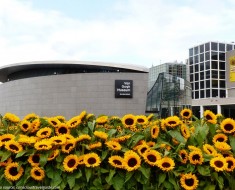 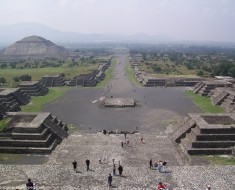 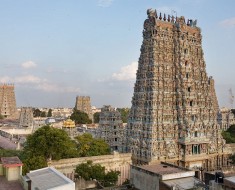 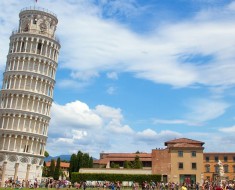