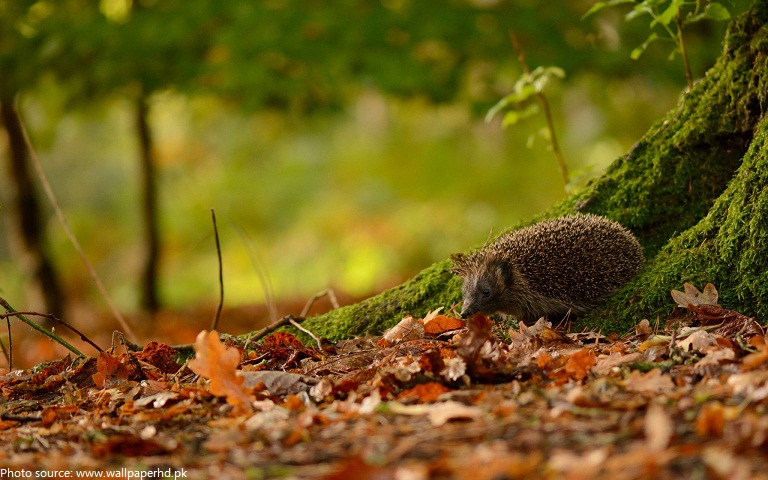 Hedgehog is a small nocturnal Old World mammal with a spiny coat and short legs, able to roll itself into a ball for defence.

There are some 17 species of hedgehog in 5 genera, found through parts of Europe, Asia, and Africa, and in New Zealand by introduction.

The hedgehog can live in many different habitats, from desert to forest and beyond!

Hedgehog’s lifespan is from 3 to 8 years in the wild, up to 10 years in captivity. 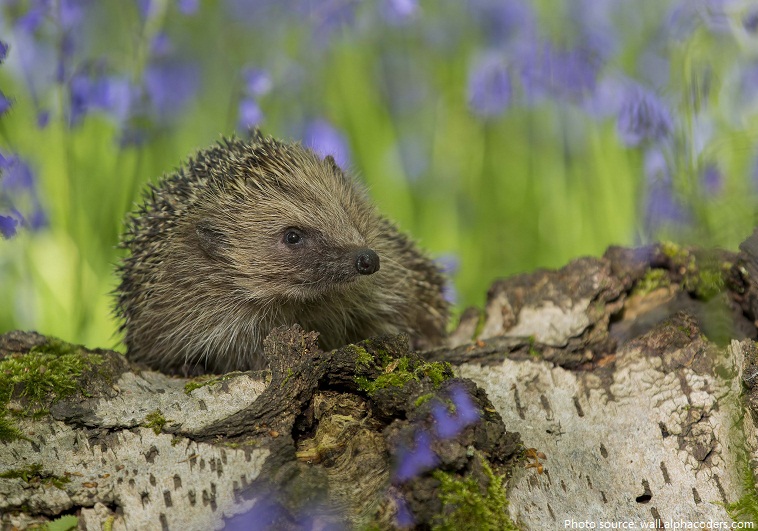 Hedgehogs can be white or light brown to black, with several shades found in bands along their quills. Their belly, face, and neck are covered in coarse hair. Some hedgehogs have a dark brown or black mask across their eyes. These interesting critters have small but powerful legs and big feet with five toes each. The exception is the four-toed hedgehog that has—you guessed it!—four toes.

Most mammals have fur or hair that is somewhat flexible and soft. But the hair on the back of a hedgehog is a thick layer of spikes (or modified hairs) known as quills. These quills are made of keratin, the same stuff our hair and fingernails are made of. When threatened, the hedgehog raises its quills upright in a crisscross pattern, making its body pointy and sharp.

They have about 5,000 – 7,000 spines.Each spine lasts about a year then drops out and a replacement grows.

Some hedgehogs dig burrows in the soil up to 50 centimeters (20 inches) deep. Others prefer to make nests with dead leaves, grasses, and branches. Desert hedgehogs hide between boulders or burrow into the sand to escape the desert heat. In Asia, long-eared hedgehogs often move into burrows left by turtles, foxes, gerbils, and otters. Hedgehogs hibernate in cold climates. In deserts, they sleep through heat and drought in a similar process called aestivation. They remain active all year in more temperate locations.

The hedgehog is nocturnal, coming out at night and sleep all day, up to 18 hours! While hunting for food, they rely primarily upon their senses of hearing and smell because their eyesight is weak though their eyes are adapted for night-time vision.

Hedgehogs are classified as insectivorous (insect eaters) but appear to be very opportunistic eaters in the wild eating a wide variety of insects, mollusks (worms and snails) small animals and vegetation, fruits and greens. The diet of a hedgehog has claimed it the reputation as being the ‘gardener’s friend’ as it includes so many ‘pests’.

Adult hedgies squeal and grunt when they are excited, afraid. They also grunt while foraging.

These solitary animals typically couple only for mating.

The gestation period for hedgehogs is approximately 35 days.

Baby hedgehogs are called hoglets or piglets.An adult female usually gives birth to four to seven young once or twice a year. 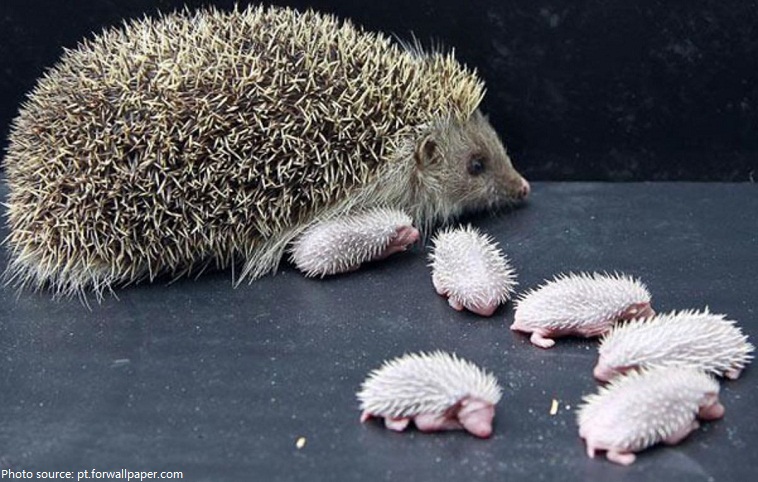 Newborns look like chubby white caterpillars. They do have quills at birth, but these are soft and flexible.During birth, the quills are covered by puffy, fluid-filled skin to avoid hurting the mother. Within a day, the hoglet’s skin shrinks, and about 150 white quills appear.

Depending on the species, it takes 6 to 13 weeks for the hoglets to be weaned. When they are ready, they leave the mother to begin their new life as a solo hedgie. 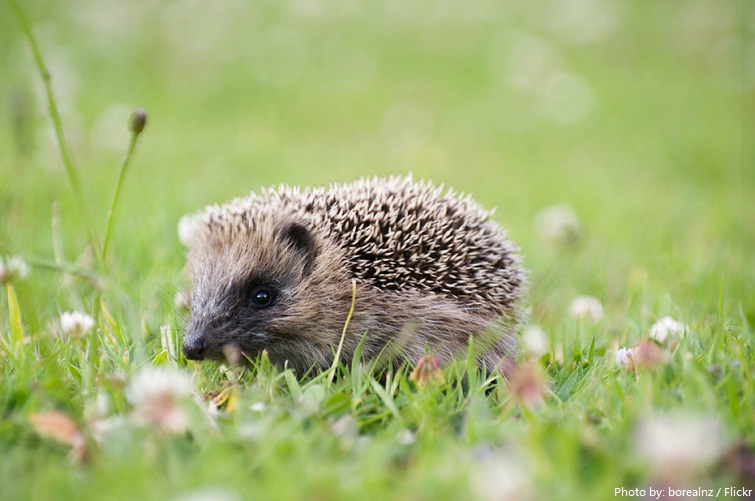 The various species are prey to different predators: while forest hedgehogs are prey primarily to birds (especially owls) and ferrets, smaller species like the long-eared hedgehog are prey to foxes, wolves and mongooses.

A hedgehog is not a rodent. Their order is Erinaceomorpha, which means they are not related to porcupines at all! Hedgehogs share more of their lineage with shrews. When a desert hedgehog wants to eat a scorpion, it must first bite the stinger off the tail. Some hedgehog species can even eat venomous snakes.

Like opossums, mice, and moles, hedgehogs have some natural immunity against snake venom through the protein erinacin in the animal’s muscular system, although it is only available in small amounts and a viper bite may still be fatal.

The name hedgehog came into use around the year 1450, derived from the Middle English heyghoge, from heyg, hegge (“hedge”), because it frequents hedgerows, and hoge, hogge (“hog”), from its piglike snout.

The collective noun for a group of hedgehogs is array or prickle.

Hedgehogs are a food source in many cultures. Hedgehogs were eaten in Ancient Egypt and some recipes of the Late Middle Ages call for hedgehog meat.

Hedgehogs are traded throughout Eurasia and Africa for traditional medicine and witchcraft.

Sonic the Hedgehog, first introduced in 1991, is a blue anthropomorphic hedgehog which is the title character in several videogames, comic strips and animated cartoons by Sega.