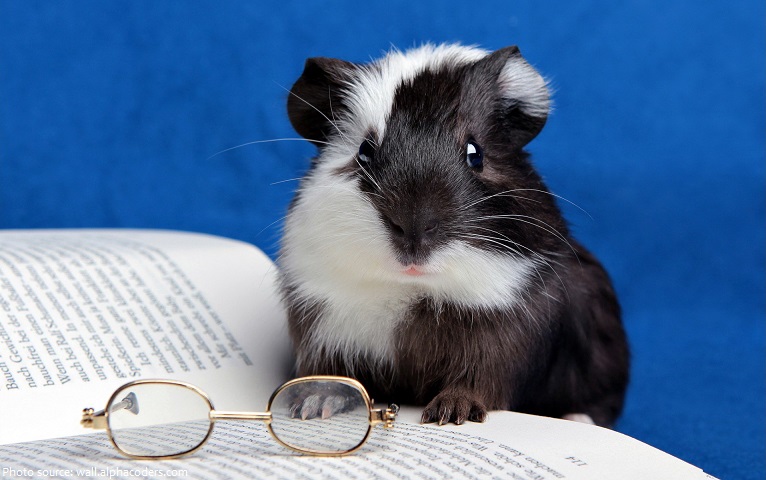 The guinea pig (Cavia porcellus), also known as cavy, is a domesticated species of rodent.

Despite his name, the guinea pig does not hail from New Guinea or any other Guinea, nor is he a pig; he makes piglike noises and he likes to eat, though.

They no longer exist in the wild.

The guinea pig was first domesticated as early as 5000 BC for food by tribes in the Andean region of South America (the present-day southern part of Colombia, Ecuador, Peru, and Bolivia).

European colonization of South America led to their introduction as pets in Europe and ultimately all over the world. 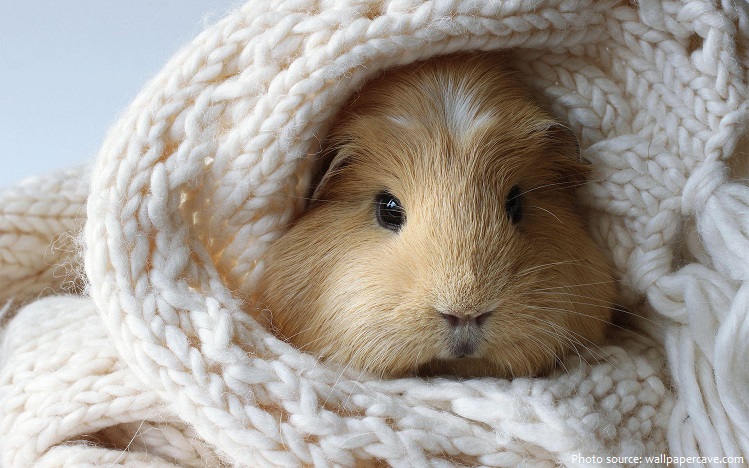 There are 13 commonly recognized breeds of guinea pig which have been developed since its domestication. These include the American, American satin, Abyssinian, Abyssinian satin, Peruvian, Peruvian satin, silkie, silkie satin, teddy, teddy satin, texel, coronet and the white crested.

Guinea pigs live an average of 5 to 7 years, according to the University of Pennsylvania’s Penn Veterinary Medicine.

According to the Guiness Book of World Records, the oldest guinea pig known was 14 years and 10.5 months old and was named Snowball. 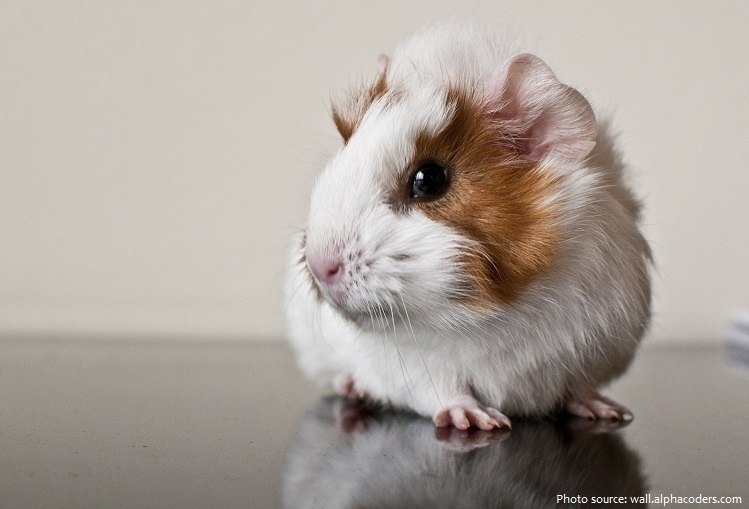 The guinea pig has a stout, compact body with short limbs, large head and eyes, and short ears. The feet have hairless soles and short sharp claws. There are four toes on the forefeet and three on the hind feet.

Unlike size, which is fairly homogeneous, guinea pig coats are diverse.

Different breeds are characterized by their hair color, hair texture, the degree of sheen of the pelage, and the color patterns of the pelage.

Like many other rodents, guinea pigs have continuously growing teeth, and they must chew or gnaw constantly to keep them from growing too long.

Guinea pigs are strict herbivores. They are often fed lettuce, cabbage, and various types of grasses and fruit. In some cases, barley and “Timothy hay”, a wide-spread perennial grass, are grown especially for consumption by domesticated mammalian herbivores such as guinea pigs. Commercially manufactured feed pellets are also good to guinea pig’s diet because they contain many of the vitamins and minerals. 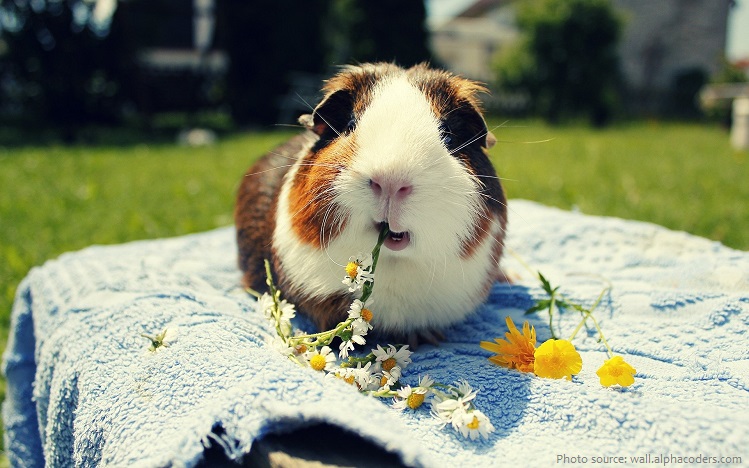 Unlike most animals, guinea pigs are neither strictly diurnal nor nocturnal. Instead, they randomly scatter periods of activity with shorter periods of sleep throughout the day and night.

Guinea pigs are very social animals and will be happiest living with other guinea pigs.

They often “huddle” to form tight groups for warmth and possibly security.

Guinea pigs startle easily and will either freeze to avoid being detected or sprint for cover.

When excited, guinea pigs often hop in the air repeatedly, known as “popcorning.”

Guinea pigs need a lot of floor space, and most cages marketed as guinea pig cages are much too small, especially for a pair (or more). 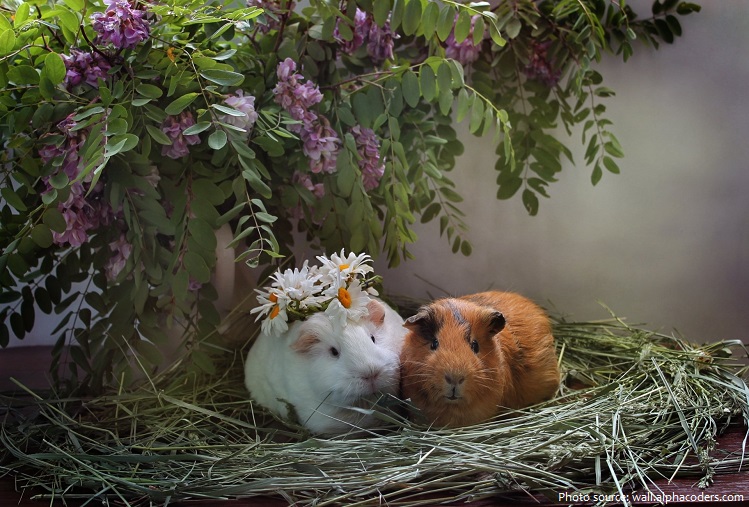 Unlike most rodents, guinea pigs do see colors; they see most colors accurately.

Their poor depth perception gives guinea pigs the reputation of not seeing well. Actually, guinea pigs can see 33 images per second — humans see only 22 — and they have a 340 degree range of vision.

They also have well-developed senses of hearing, smell, and touch.

Tactile hairs on guinea pigs’ muzzles help them find their way in the dark as well as figure out how large an opening is. 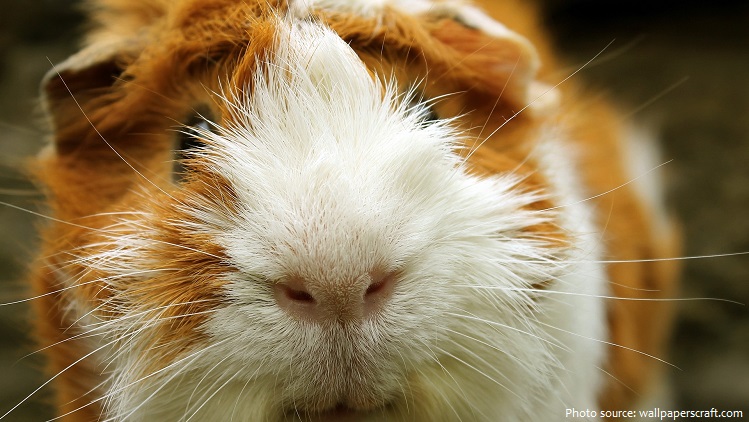 A guinea pig’s normal heart rate ranges between 240 to 350 beats per minute, while a normal respiratory rate is between 40 and 150 breaths per minute.

Guinea pigs communicate through a variety of noises, including chutts, squeaks, wheeks, whines, whistles, purrs, and chirps. Though generally not loud enough to annoy the neighbors, a wheeking guinea pig can be surprisingly loud.

The guinea pig is able to breed year-round, with birth peaks usually coming in the spring. The gestation period lasts between 60 and 70 days. Litters yield one to six pups, with an average of three; the largest recorded litter size is 17. Guinea pig pups will stay near their mother constantly for both warmth and food, nursing for up to 30 days. 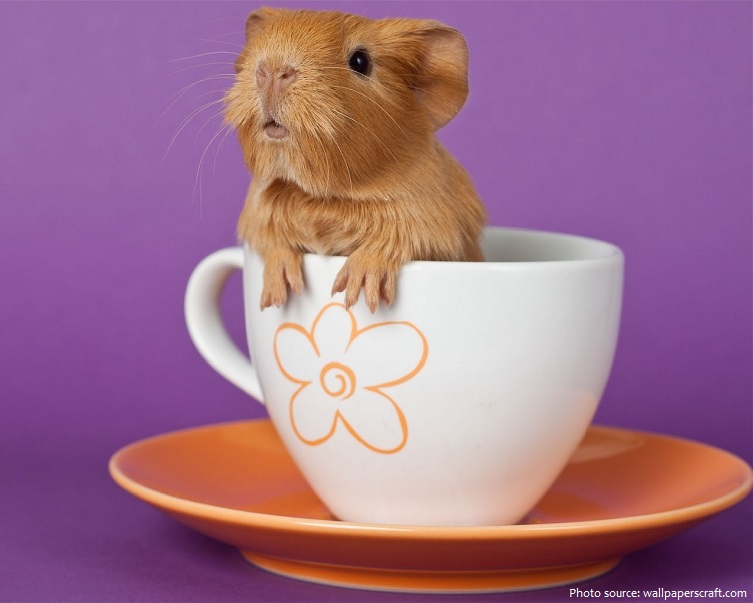 How the animals came to be called “pigs” is not clear. But it probably came from the fact that they make little pig like noises sometimes and they also look like a mini piglet.

The word “Guinea” can also be corrupted from the word “Guiana”, which is close to their point of origin, South America. Other proposed explanation is that the animals were brought to Europe by way of Guinea, leading people to think they had originated there. “Guinea” was also frequently used in English to refer generally to any far-off, unknown country, so the name may simply be a colorful reference to the animal’s exotic appeal.

The guinea pig plays an important role in the folk culture of many Indigenous South American groups, especially as a food source, but also in folk medicine and in community religious ceremonies. 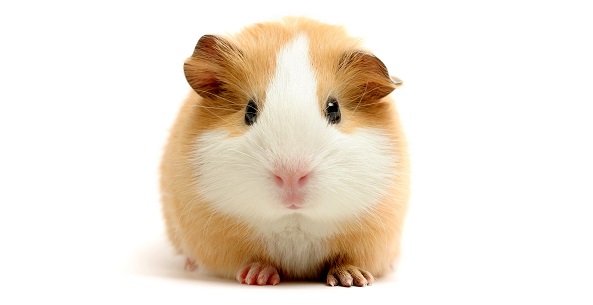 The animals were frequently used as model organisms in the 19th and 20th centuries, but have since been largely replaced by other rodents such as mice and rats.

Guinea pigs can learn complex paths to food, and can accurately remember a learned path for months.

The fastest 10 meters (32.81 ft) by a guinea pig was achieved by Flash, who ran the distance in 8.81 seconds, in London, UK, on 27 July 2009. Record was attempted by ten guinea pigs throughout the day, individually, with Flash clocking the fastest time. 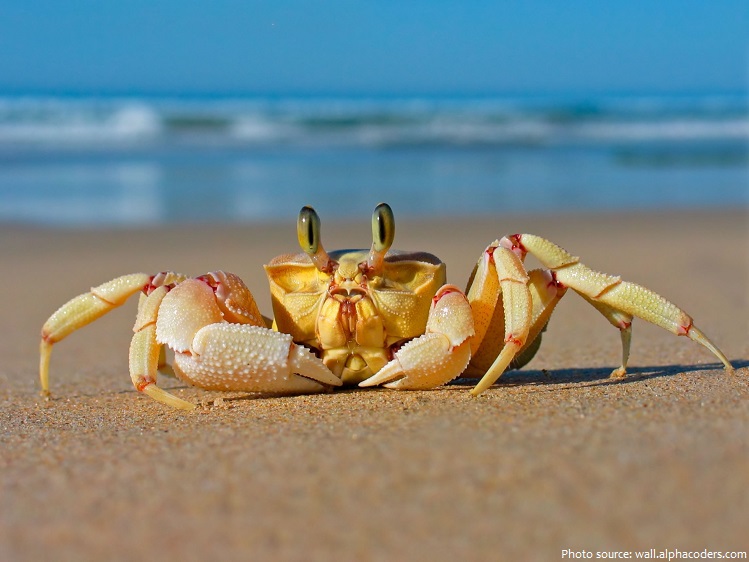 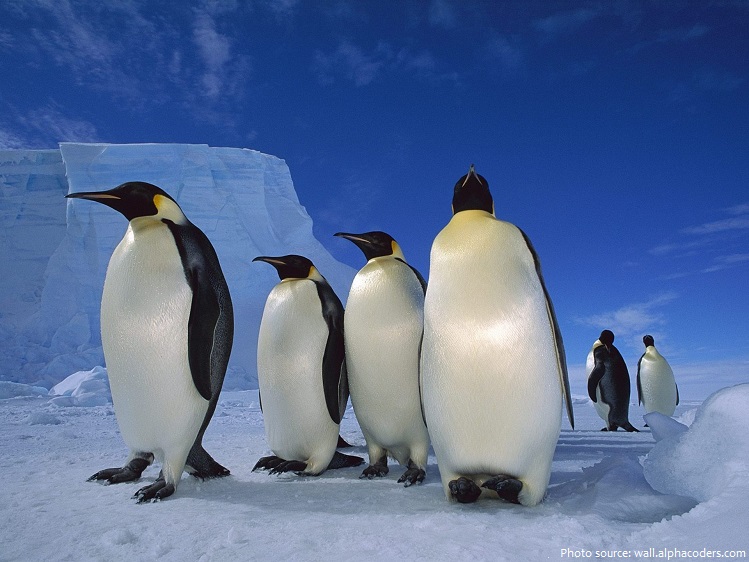 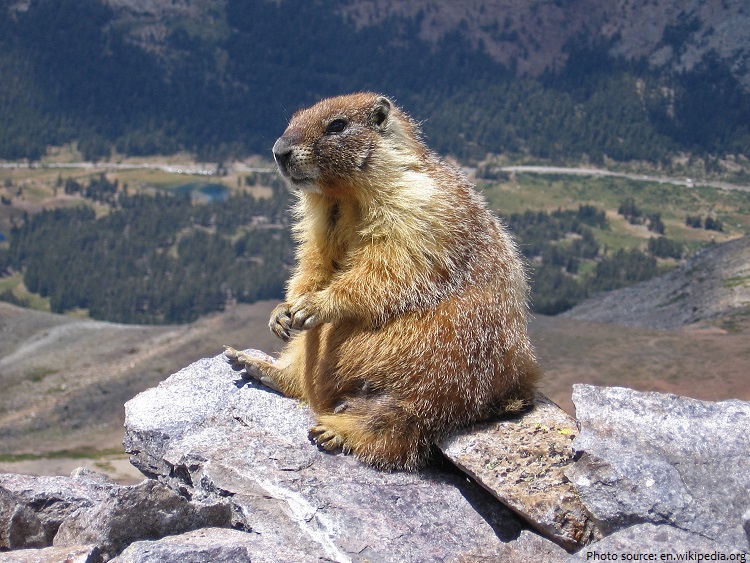